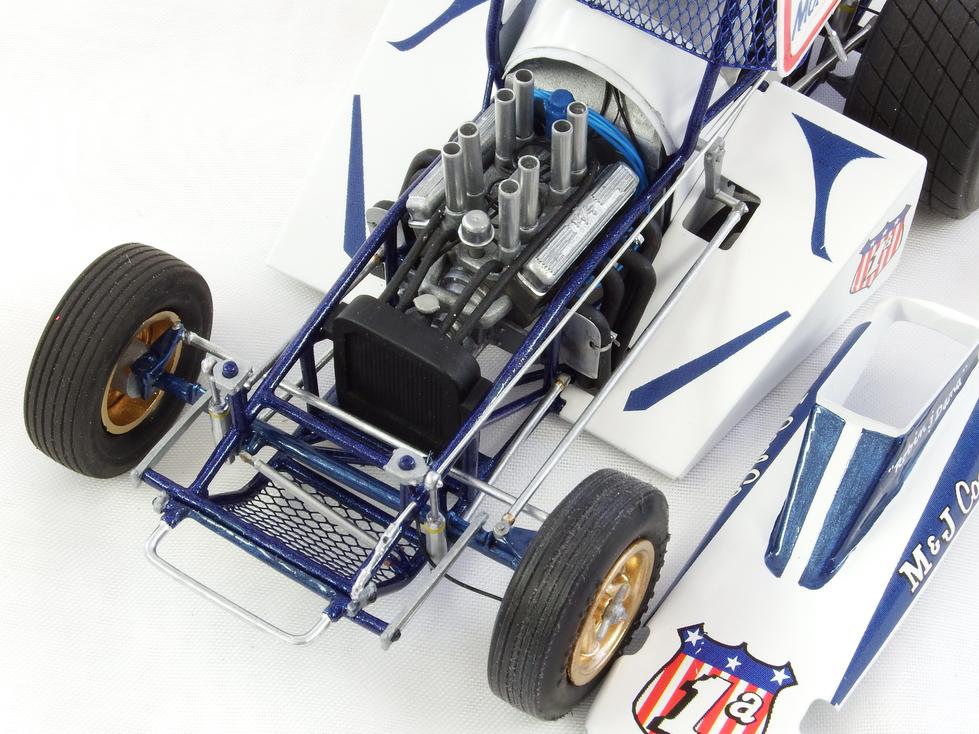 Raising the bar once again, President JR Burggren displayed his absolutely amazing Bobby Allen 1975 sprint car.  It was kit bashed/scratchbuilt from AMT, Grant King, Monogram Sammy Swindell components.  All body parts except for the fuel tank are scratchbuilt from aluminum.  He used two lacquers and one enamel paint.  All the numbers and printing on the wing are hand painted.  Good grief.  This is world class quality!

Brad Hicks was rightfully proud of his Israeli Tamiya M1 Super Sherman.  He textured the front of the tank and he added screening on the vents at the rear of the tank.  He did a masterful job of weathering using the Tamiya weathering Master A.  He used the two figures from the kit plus two from an Israeli M51.  Looks perfect, Brad 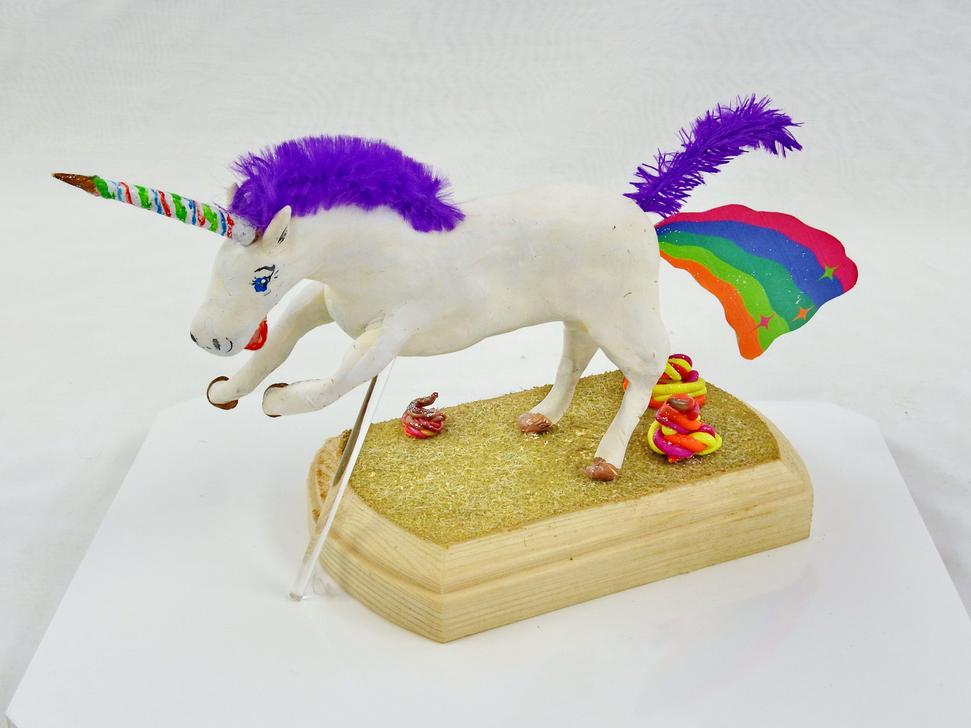 Thirteen members were on hand to sing Happy 80th Birthday to great guy Feller Dewitt.  Al George gave Feller his winning raffle ticket as a birthday gift.  Nice!
Bob Thompson is back home!  He still has a way to go but being at home should help his recovery.  Get well, Bob!
New guy Dennis DeCook, left us stunned with his first ship model.  He didn’t mess around!  His 1819 Virginia from Spanish kit maker Artesania was just beautiful.  Dennis said it took five months of three hours/day to build this 1/75th wood baby.  Welcome aboard, Dennis! 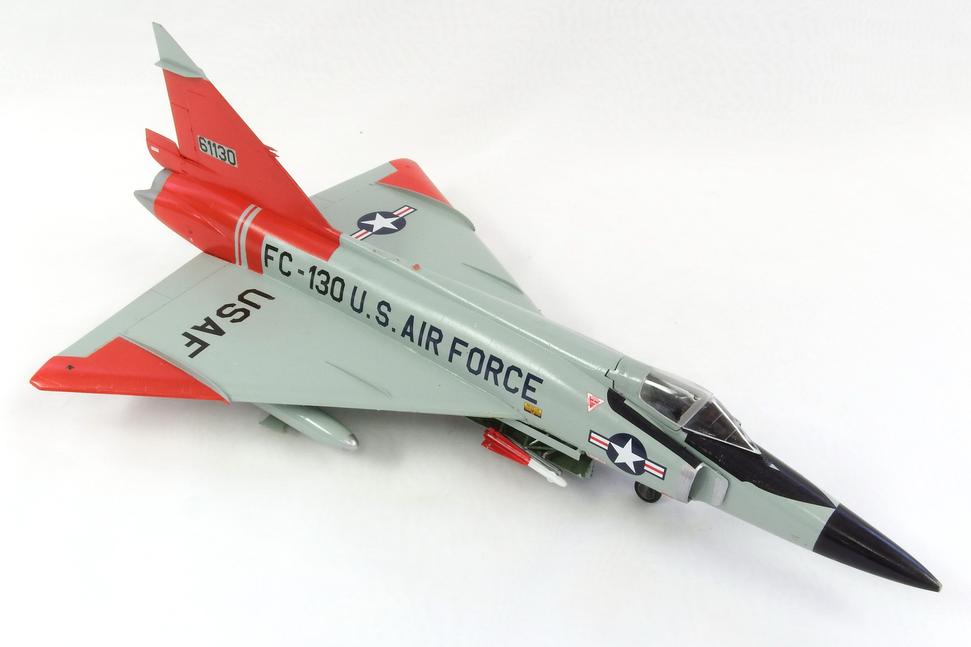 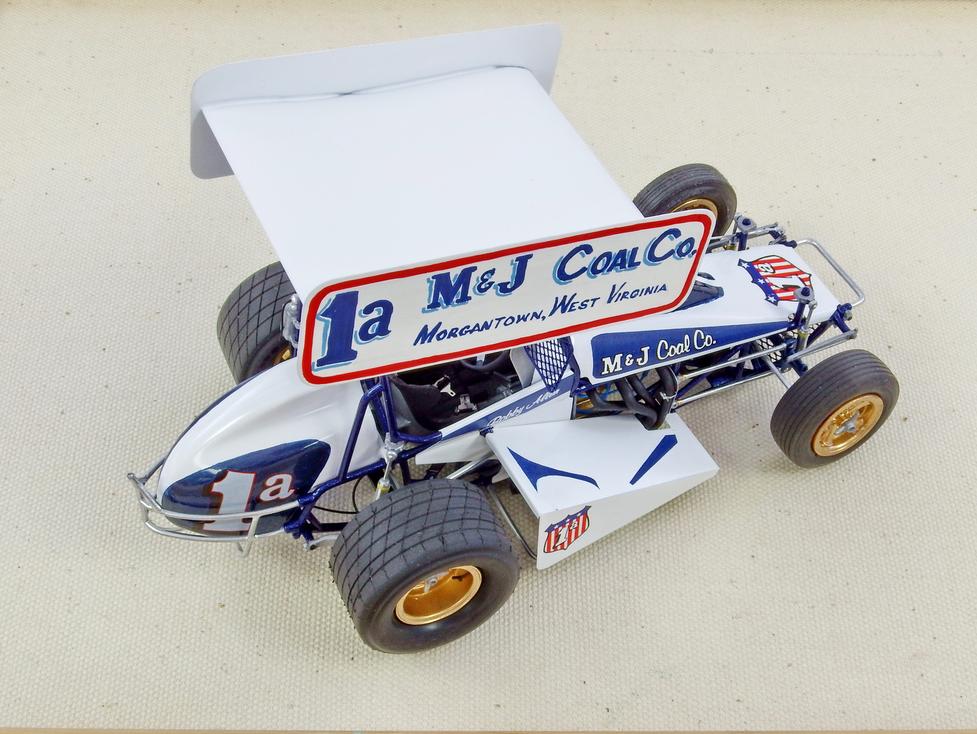 Tom Ralya brought in a very unique O scale shepherd’s wagon.  It is all wood except for a fabric top.  The kit has 25 parts…maybe 30…maybe nobody knows!  ;-)  Tom added windows to the wagon.  Really nice, Tom, and very interesting! 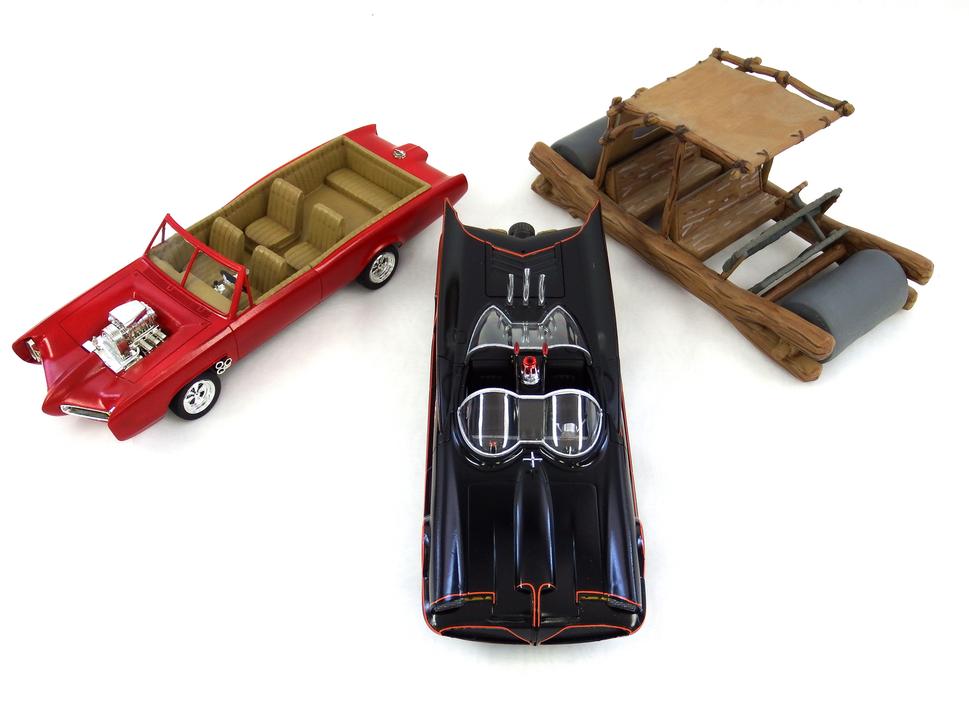 The birthday boy brought in a Hasegawa 1/72 F-11-F-1 Tiger.  Per normal practice, he hand painted this beauty with Model Master paints and Super Scale decals.  Feller was happy to report it was a perfect fit and an easy, quick build.  Just what you need for your birthday! 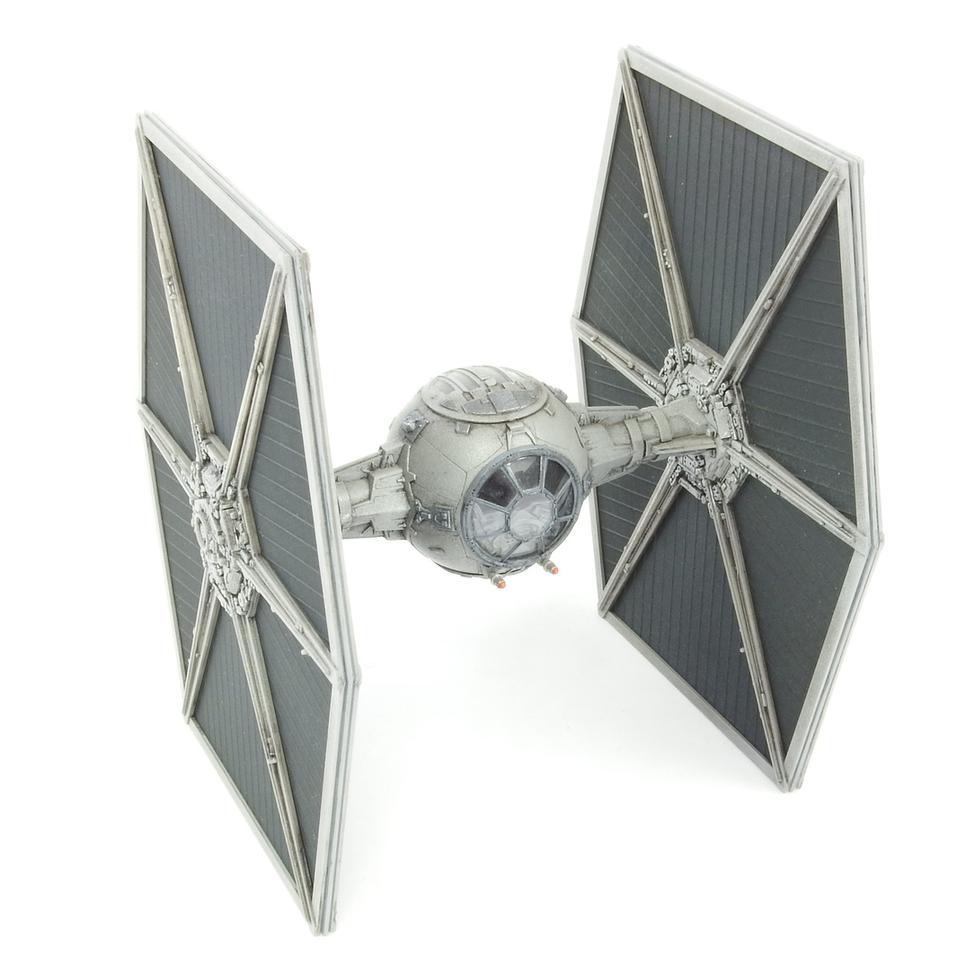 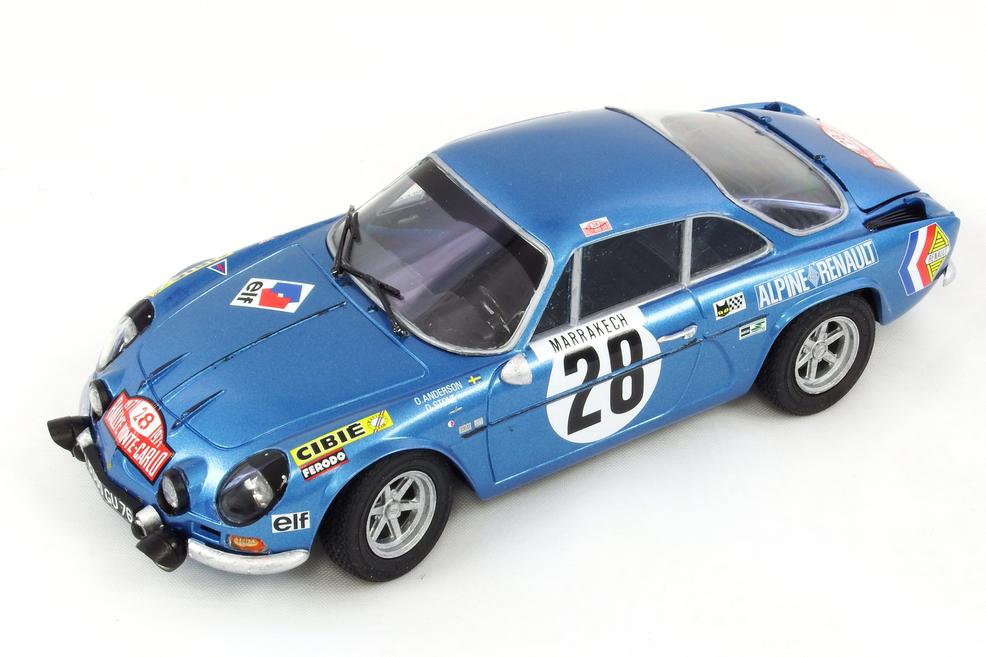 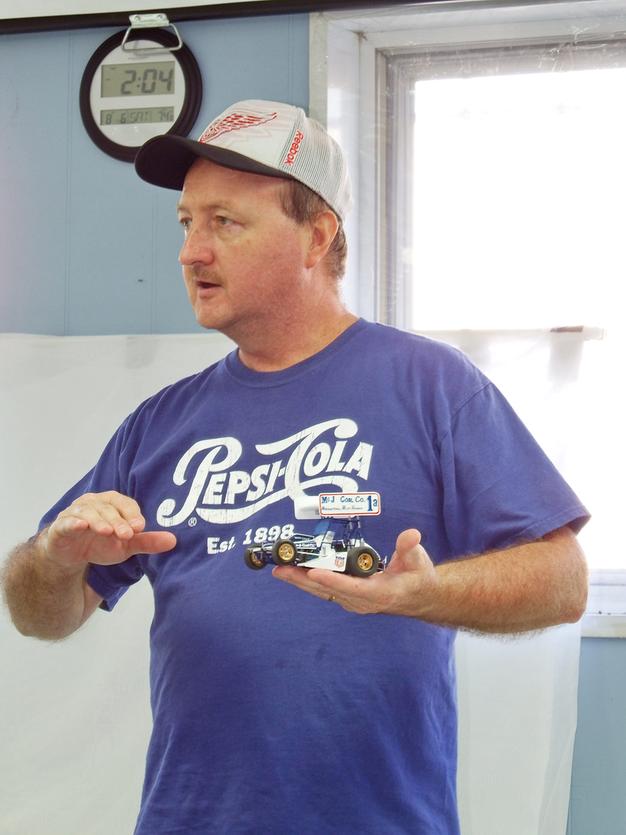 I'll see you at the September S&T!

Doug Shuur almost gave me a data sheet!  He brought in a gorgeous F-102 Delta Dagger loaded up with Falcon missiles.  This model represents the modified plane with the “20 wing” or “XX” wing.  Great job, Doug! 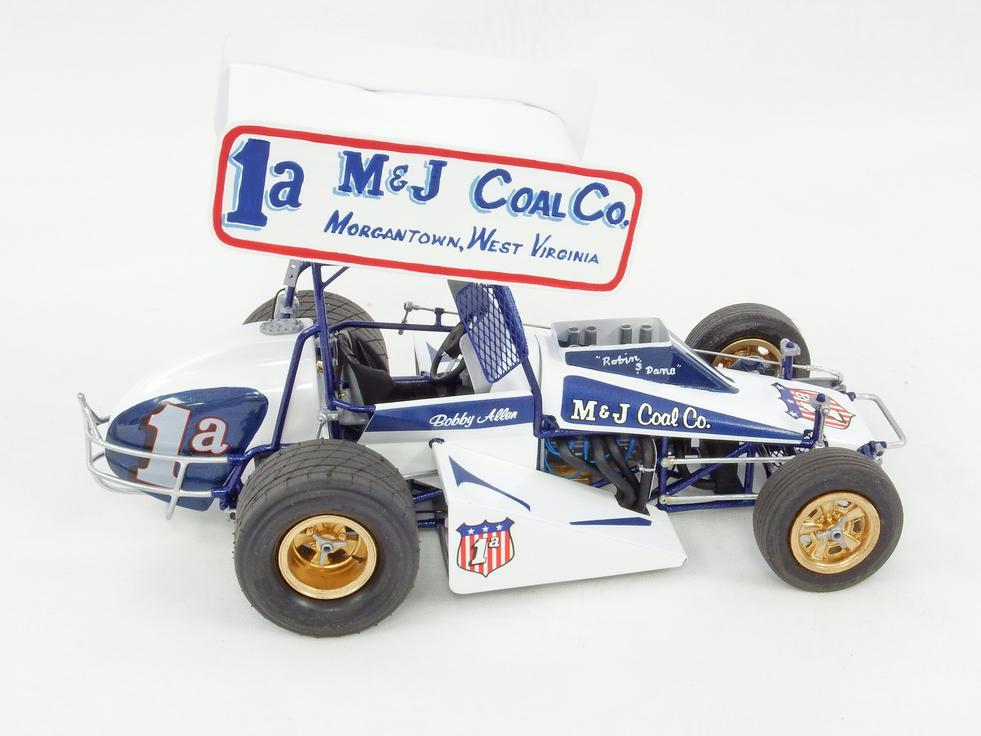 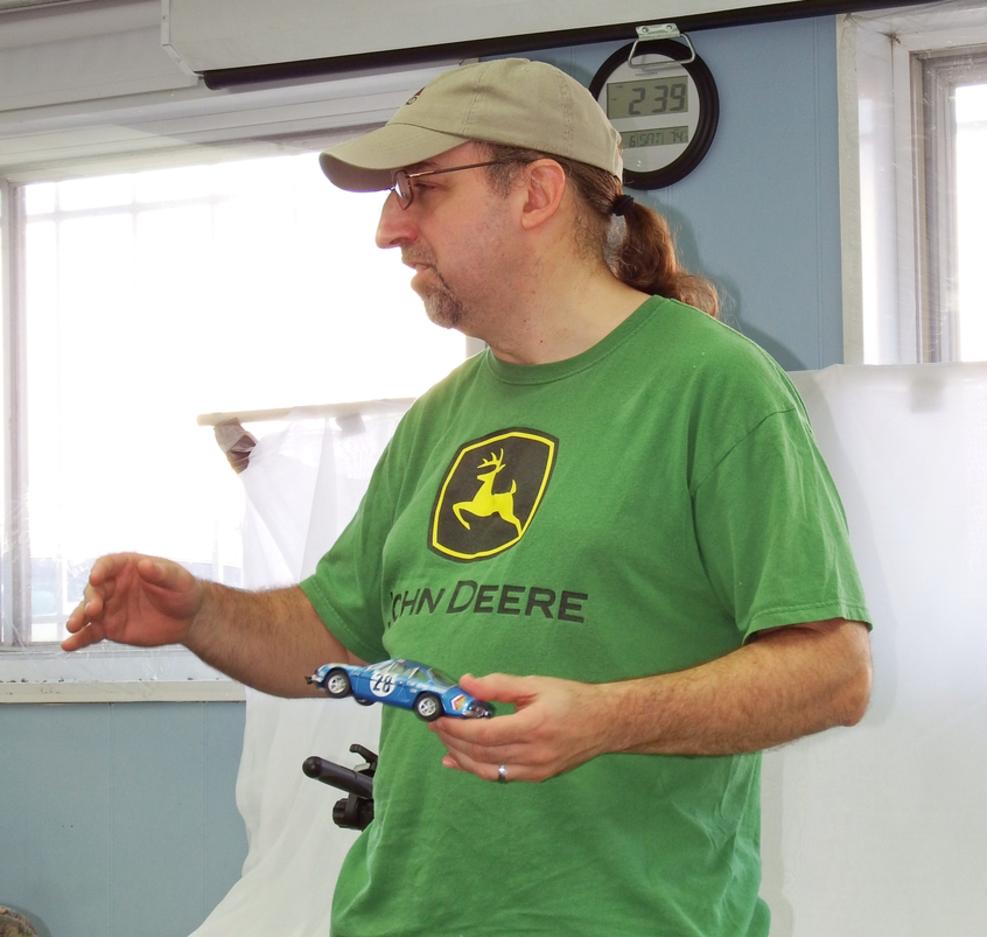 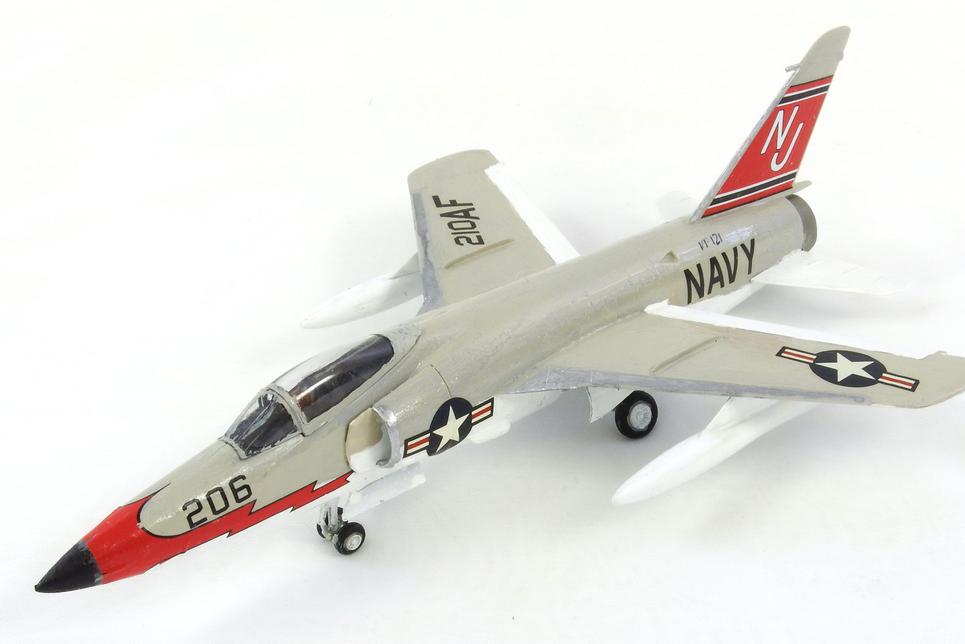 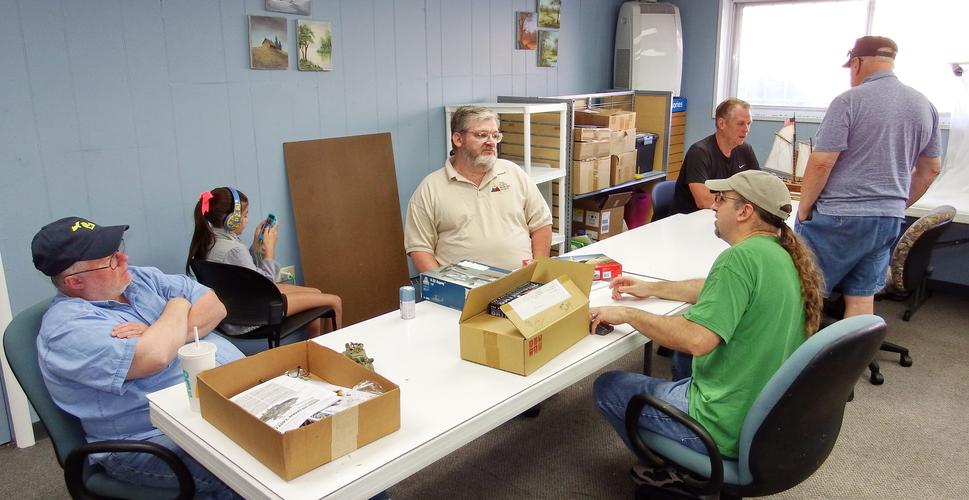 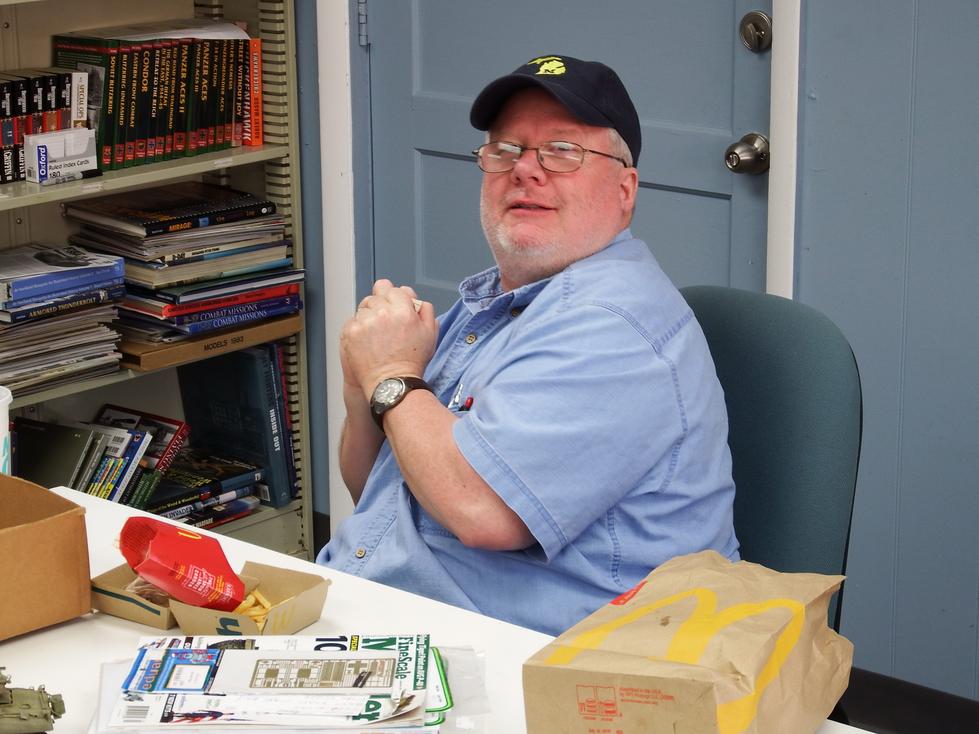 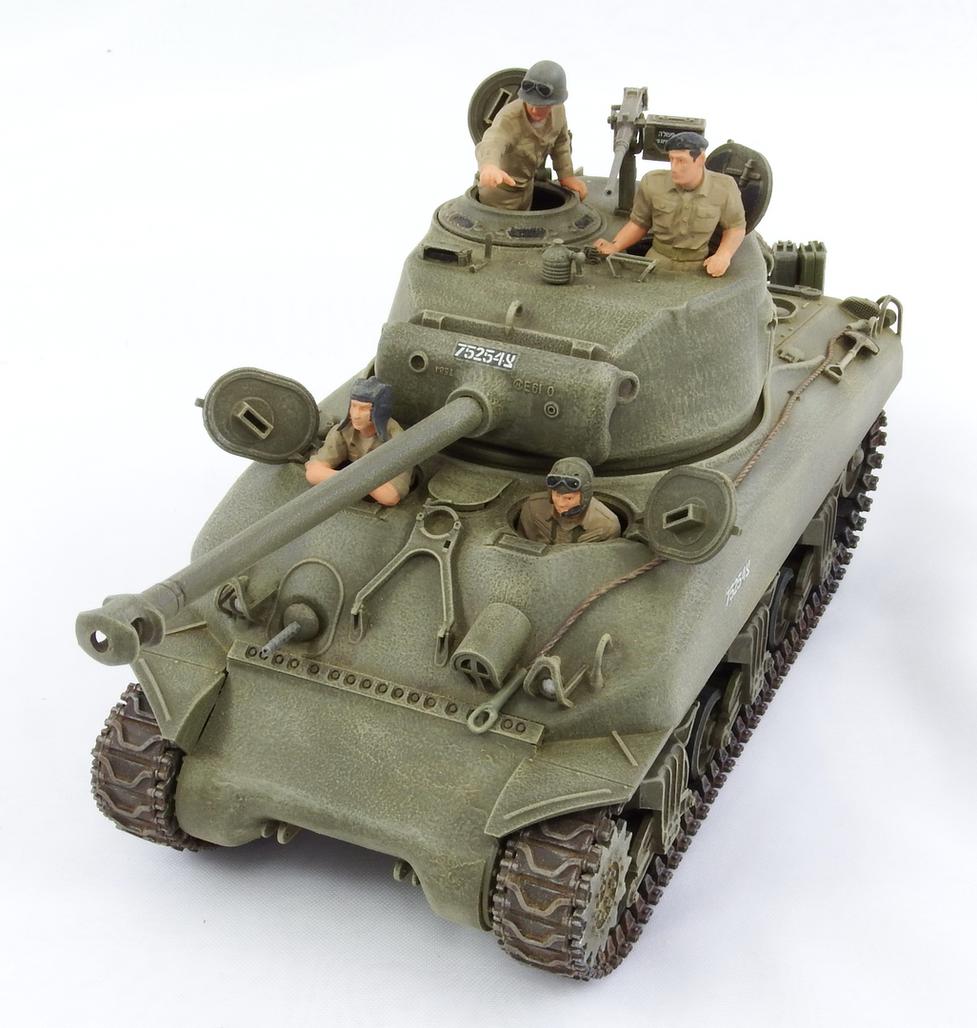 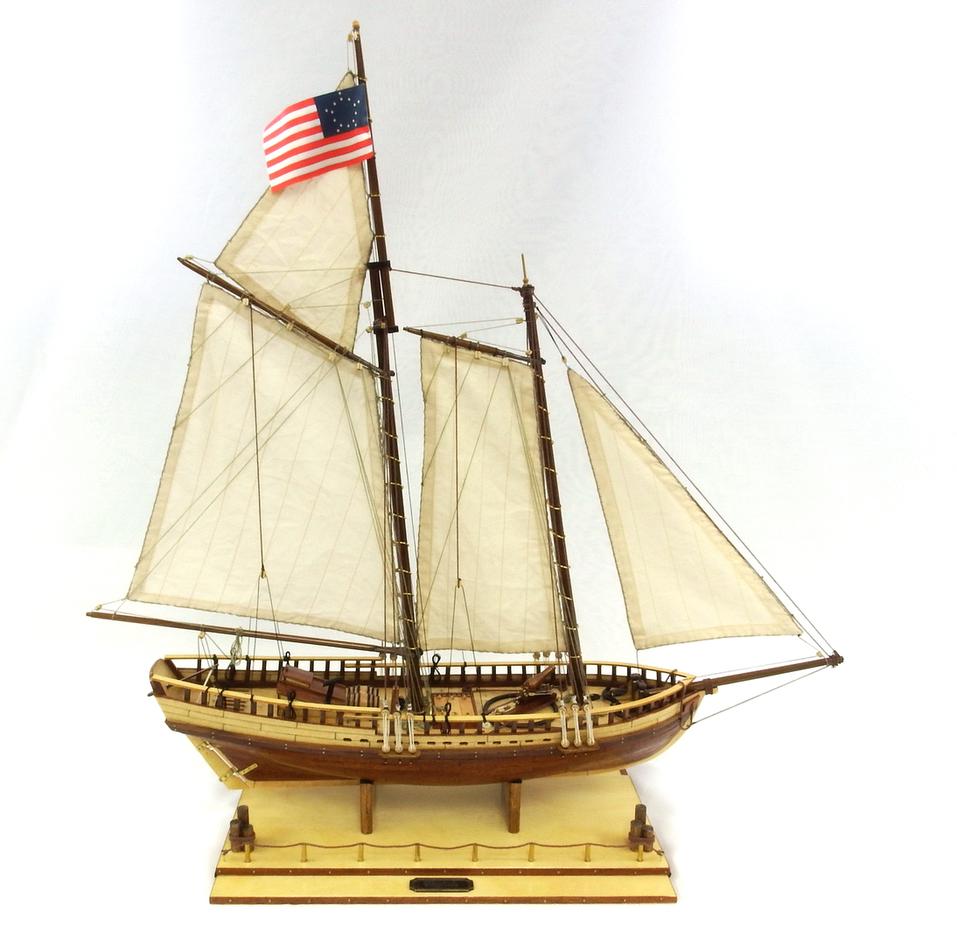 The theme for Mark Jahsan today was “TV Cars”.  Here we have his 1/24th Batmobile from the 1966 TV show which was a Polar Lights kit.  He said it was a very nice kit.  His Monkeemobile was an AMT kit and the real car started life as a ’67 GTO.  And the third vehicle is the Flintstone mobile which was a Lindberg snap-tite kit.  Another masterful job, Mark! 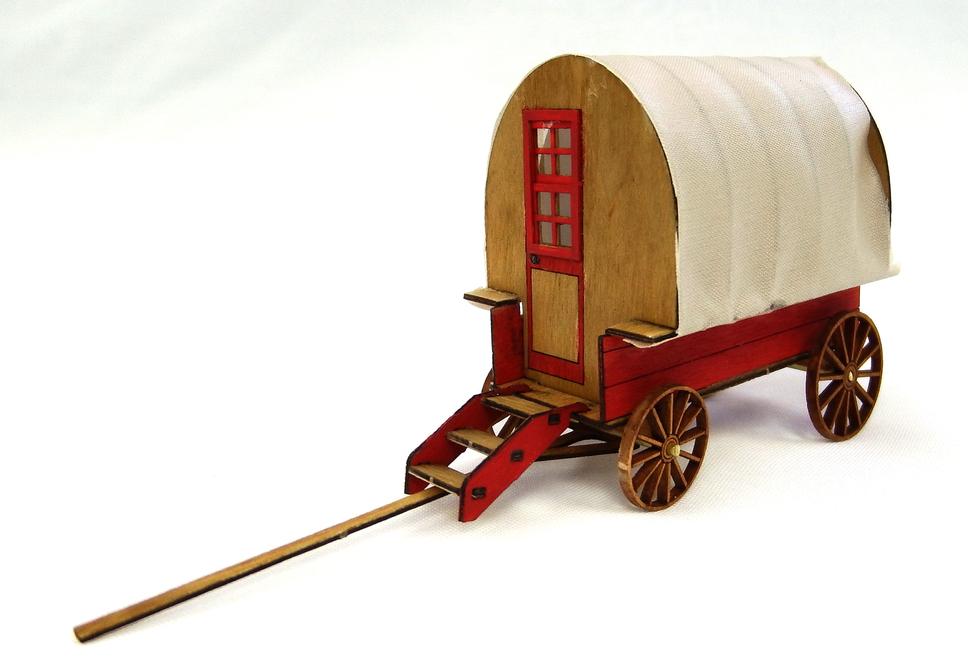 Better put the kids to bed for this one!  Rob Sheffer was “commissioned” by a nine-year-old girl to make a “Unicorn Pooping Rainbows”.  Note the colorful road apples!  If children are our future…  Get this, Rob scratchbuilt the unicorn!!  Amazing!!  His TIE Fighter is a Fine Molds 1/72 kit.  He airbrushed Tamiya acrylics and then dry brushed.  The unicorn is simply….unique!!!  Great job on both, Rob! 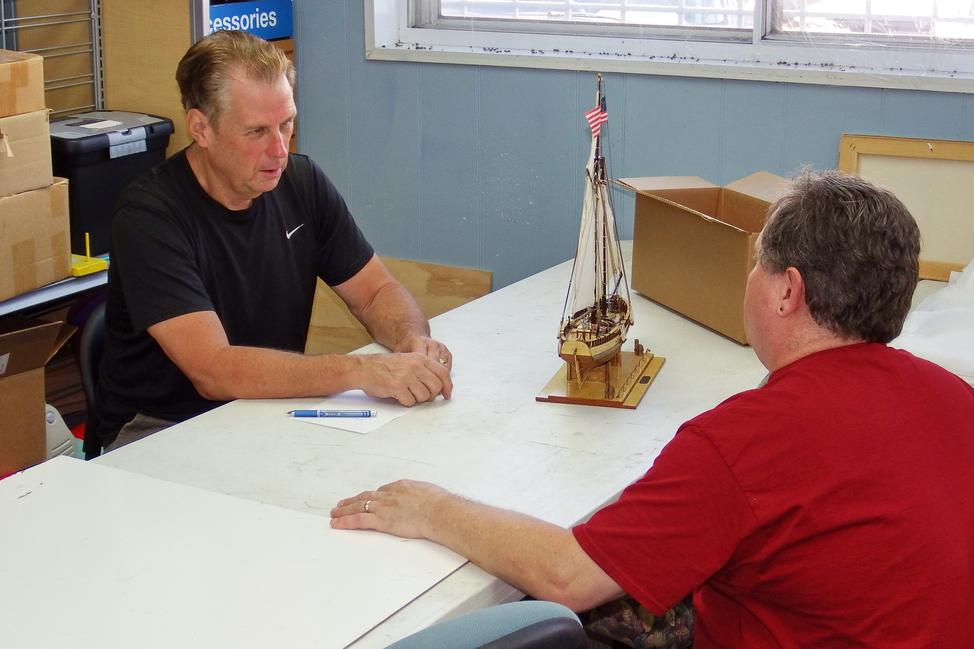