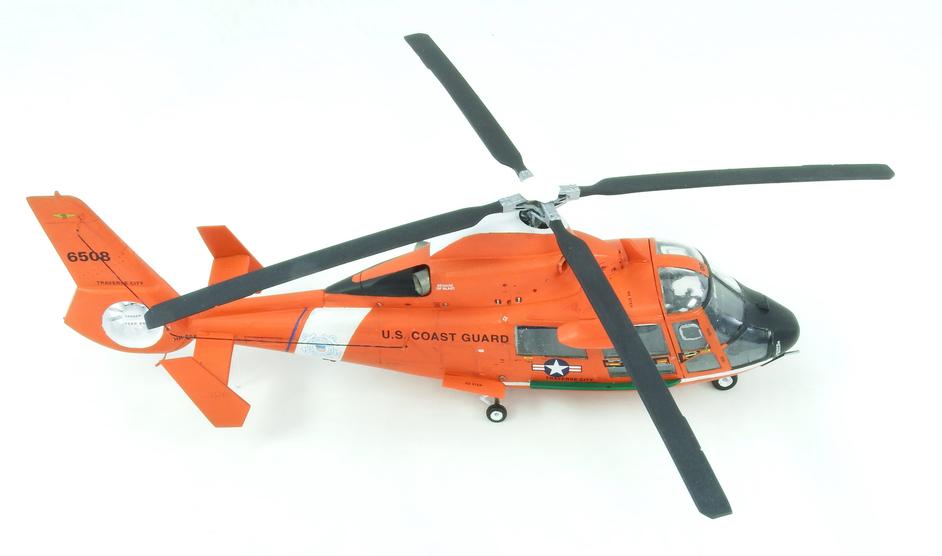 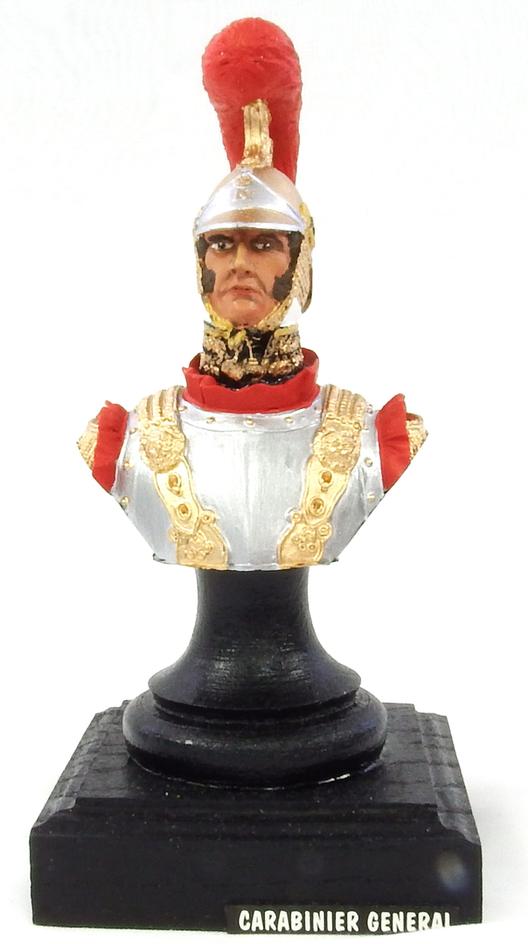 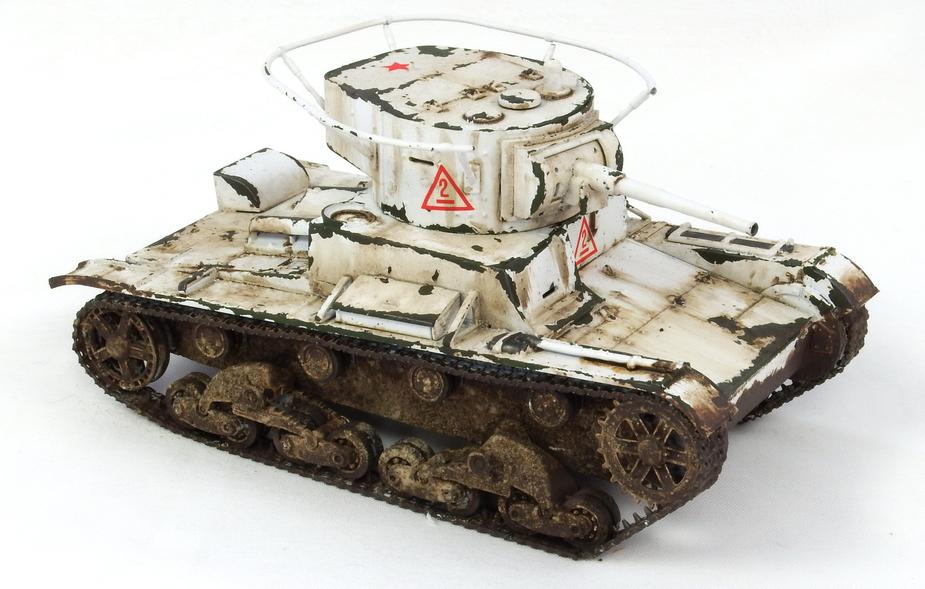 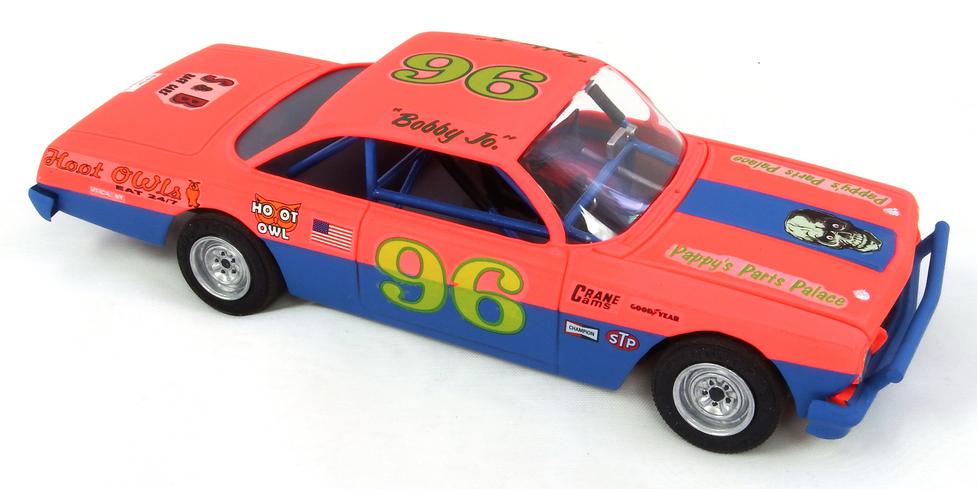 Dave Martin brought in a Dragon T-34 late production in service with the Polish Liberation Army.  Dave didn’t like the kit…which is the way it usually works…because Bill Leger and I think it is Dave’s best looking model!  Go figure!

Scott Herbert bedazzled us with a beautiful model and a beautiful diorama.  The helicopter is a Trumpeter 1/48 USCG HH-65A Dolphin.  Amazingly, the kit decals were for the helicopter in Traverse City!  He airbrushed with Vallejo Model Color trying to match the color as precisely as possible.  The diorama featured the 1/32 Tamiya USMC F4U-1 birdcage Corsair.  He scratchbuilt the trees out of coax cable, Milliput, masking tape, and green feathers which he put in a white glue/water mixture.  Say what???  He then painted them in different shades.  Impressive.  Great job, Scott!  Oh, and he hand  drilled out all the holes in the PSP.  Yikes!  ;-)

I didn’t know if Mark Jahsan was on drugs or if he was following in Danny’s footsteps with a fantasy aircraft model.  But I was in error.  At least about the model…who knows about the drugs!!  ;-)  This was a real plane.  Built by Douglas, it is the Lone Star Models 1/48 XB-42 MixMaster.  It was tested at the end of WWII and set a cross country speed record of 433 mph from LA to DC.  As good as it was, it couldn’t compete with the jets.  Thanks, Mark! 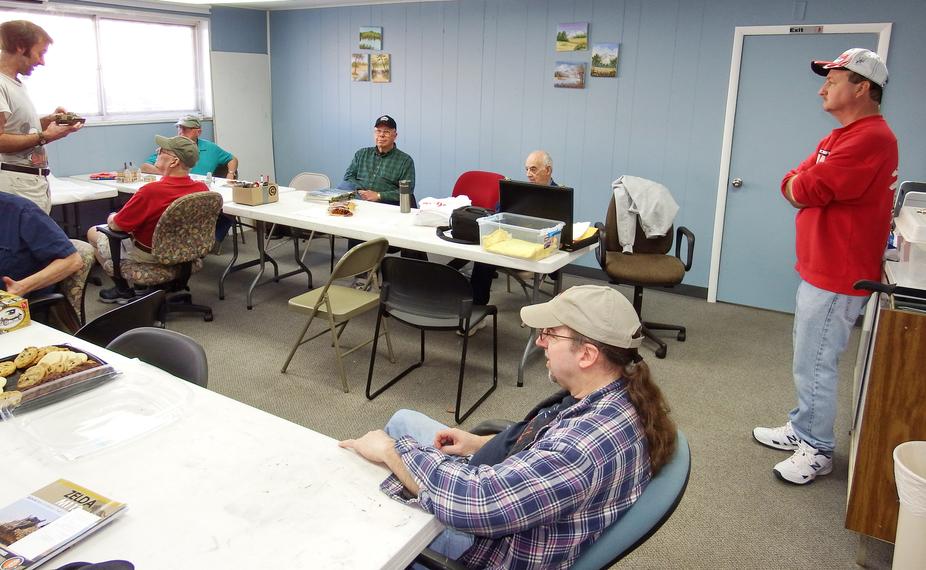 A reminder: PLEASE submit a write-up/model description with your model.  I can’t write fast enough to keep up…and when I can…I can’t read my own handwriting!  See ya at the Work Session!  So great to see Bob Thompson doing so well and to have Robert Jackson back! 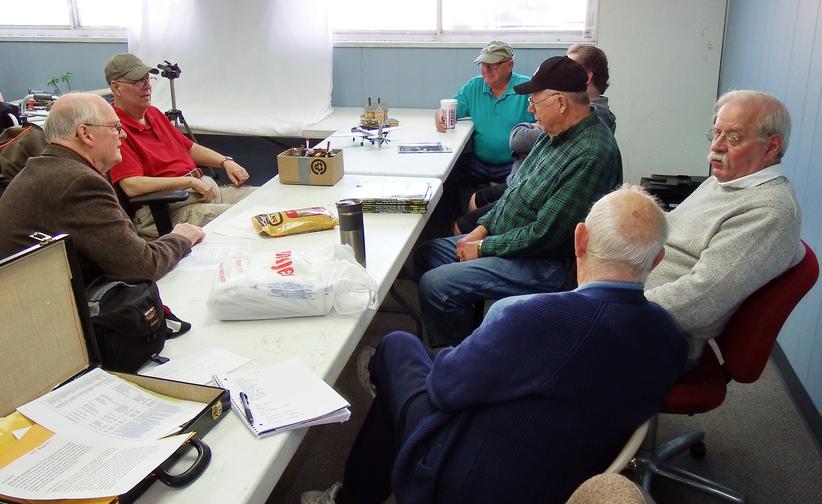 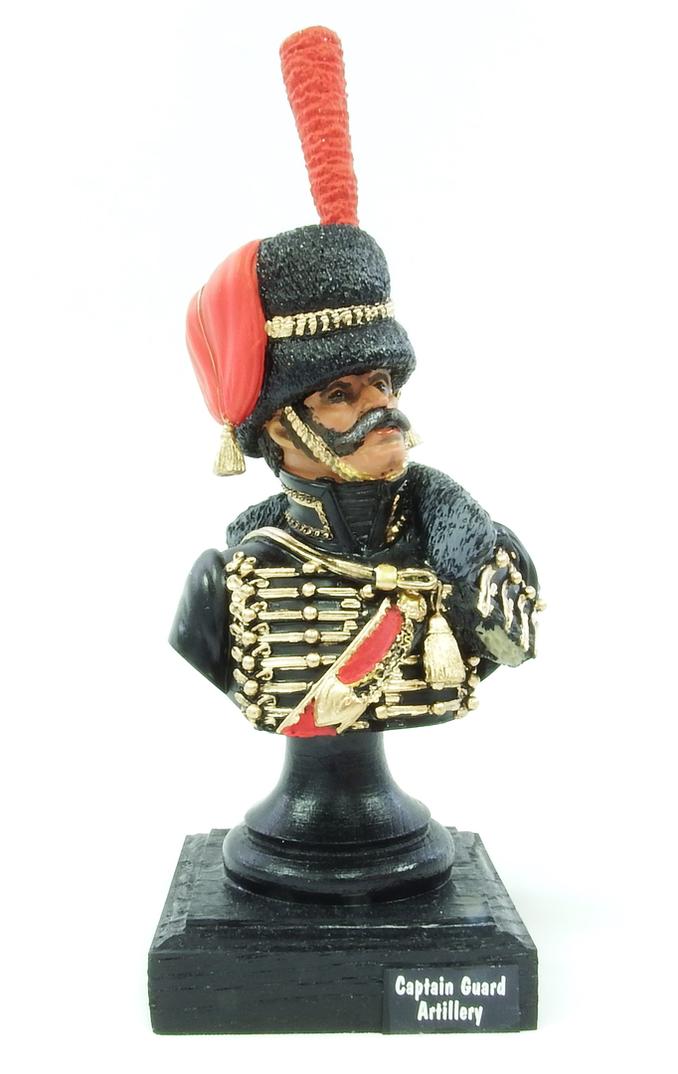 Big Daddy Jerry Bridenstein brought in a beautiful M-10 Wolverine.  Jerry made the sandbags from Milliput putty. I have a feeling we will see this baby down in GR.  Great work, Jerry! 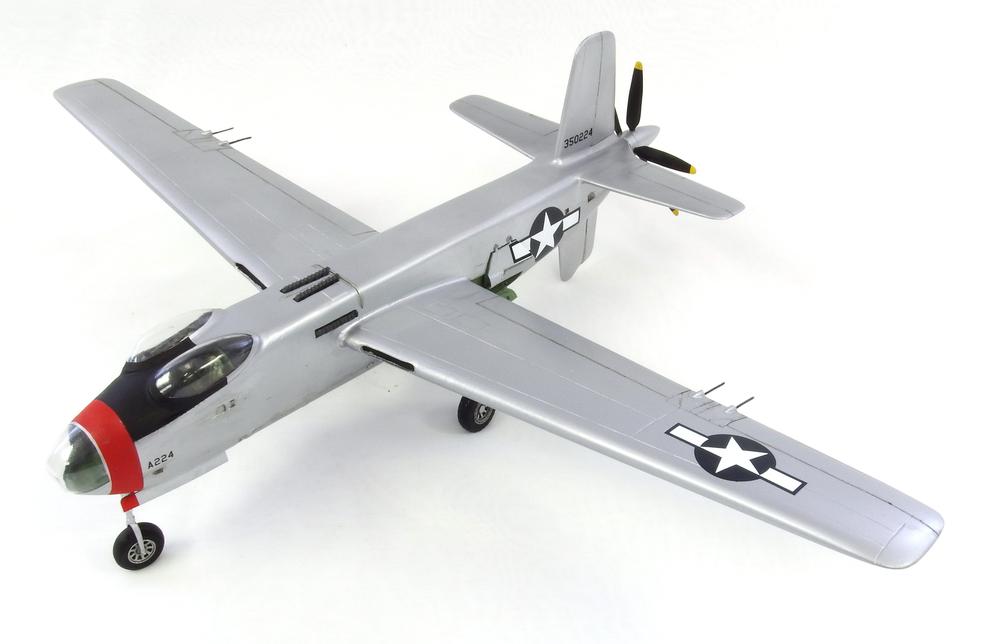 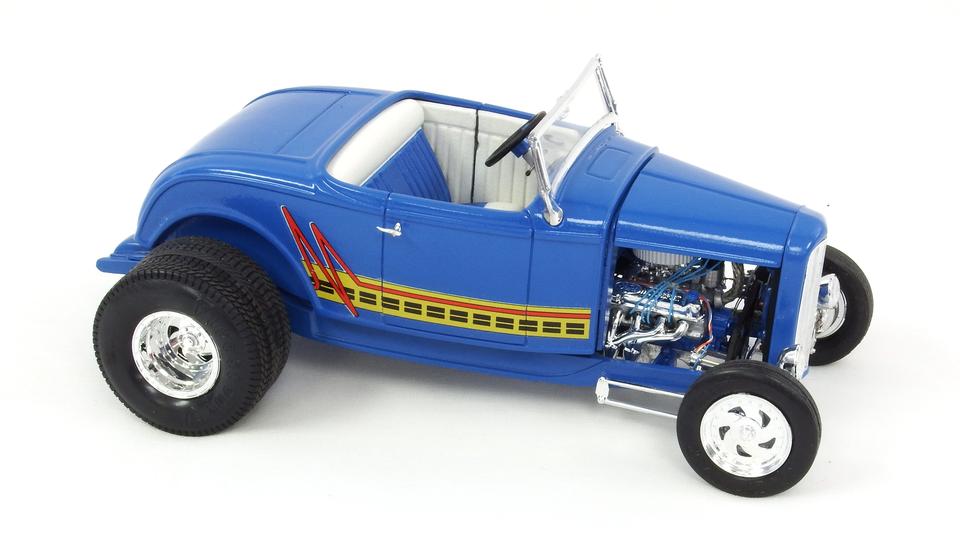 And now, the depressing part of the report…photos of you!  If only you guys were better looking, this wouldn’t be so painful.

Prof. Bill Leger brought in the ancient Heller Golden Hind that he built back in the ‘80’s.  One smart aleck mouthed off that Bill did great work back in the day.  Oh, that was me.  Well, it is a great looking model!  ;-)

Bob Thompson has been a busy modeler while he has been recuperating.  Here are his latest six figures and busts.  In order, I think, are a Roman Legionnaire, a Hussar Captain Guard, a French Light Horse Lancer, a French Carabinier General, a German Panzer Commander, and a German U-boat Captain.  Well, Bob hasn’t lost his touch!  The last photo is of a an old Civil War Vet.  Great job Bob and welcome back! 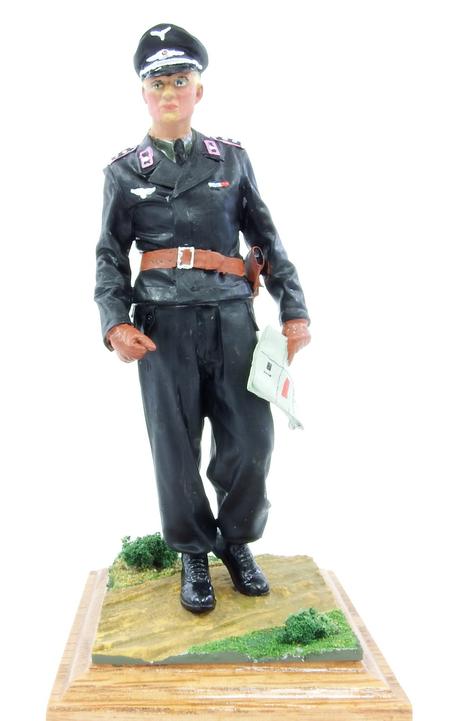 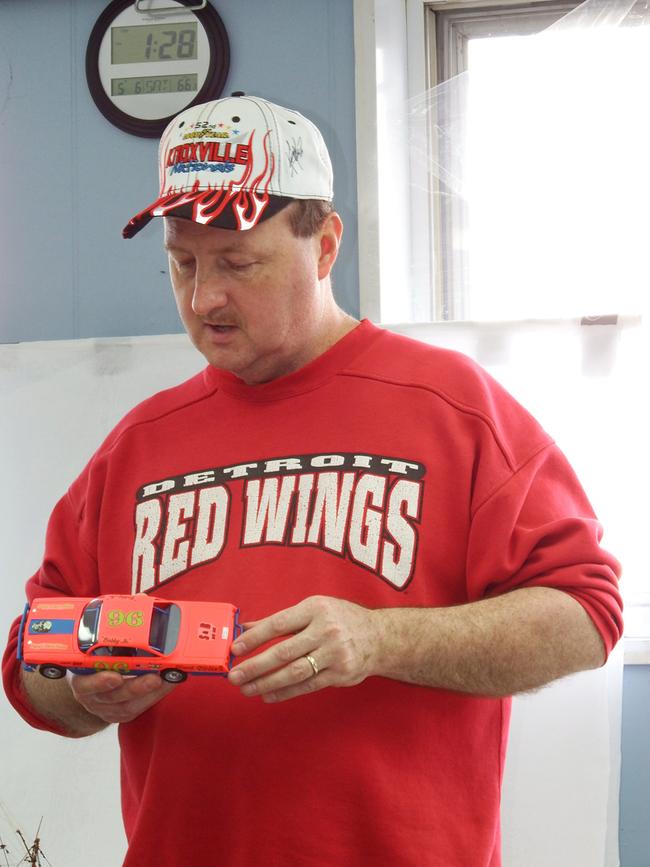 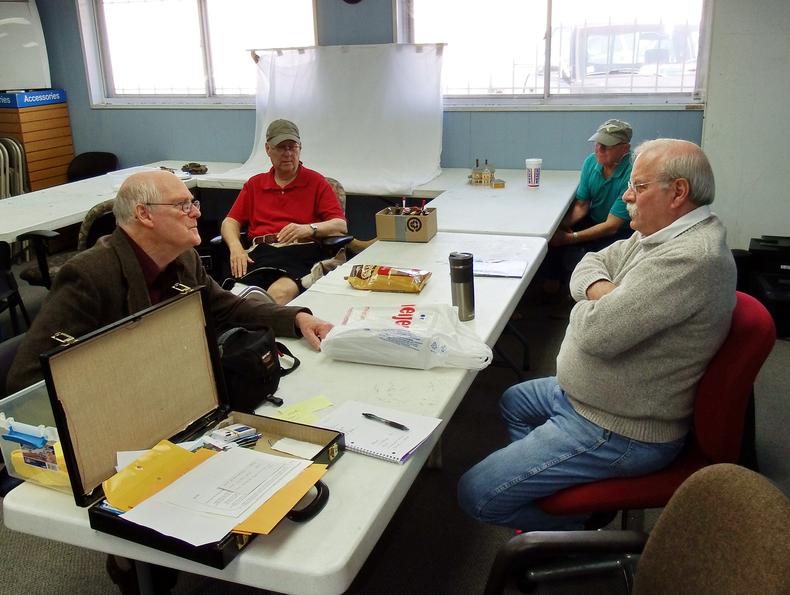 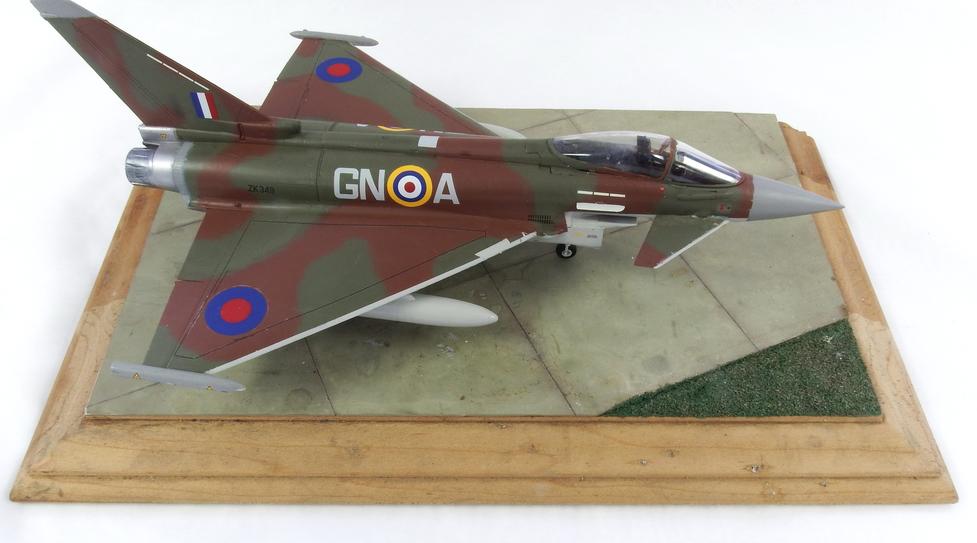 Doug Schuur brought in the Revell Eurofighter Typhoon.  The paint job was to celebrate the 75th anniversary of the Battle of Britain.  It is parked on one of Danny’s bases.  Looks awesome, Doug. 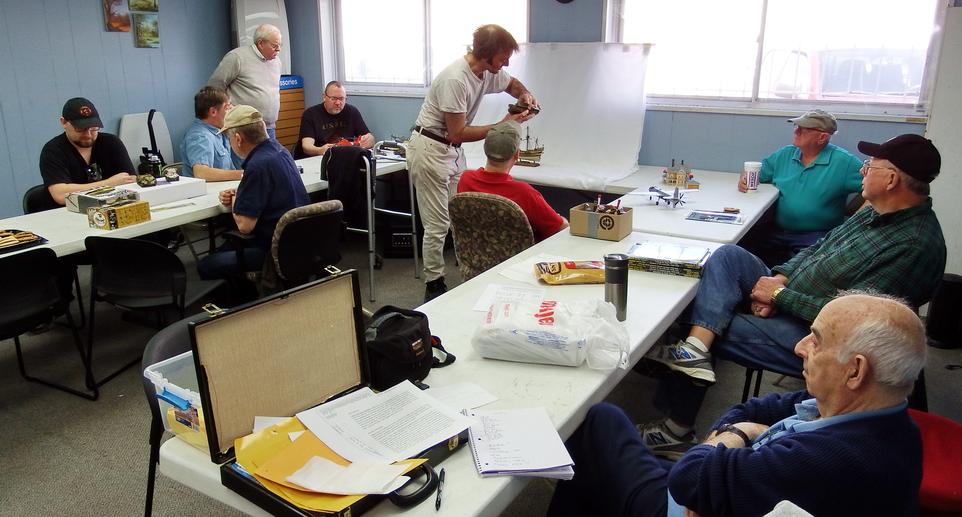 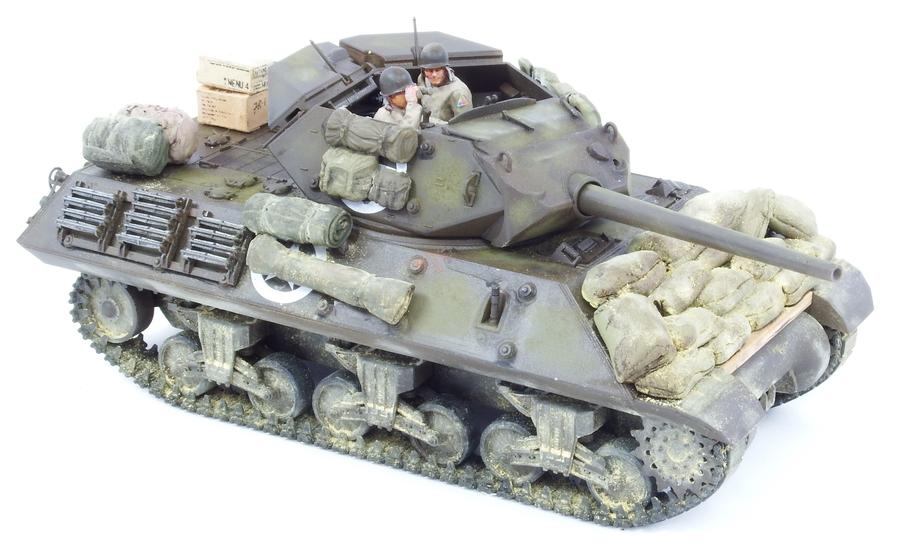 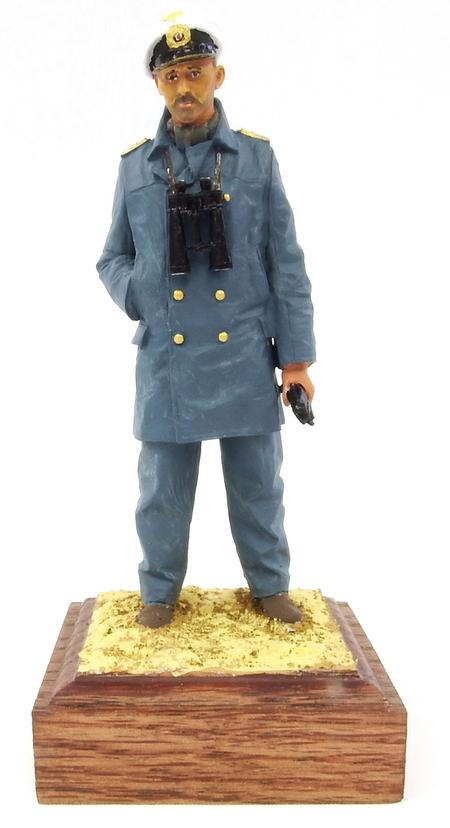 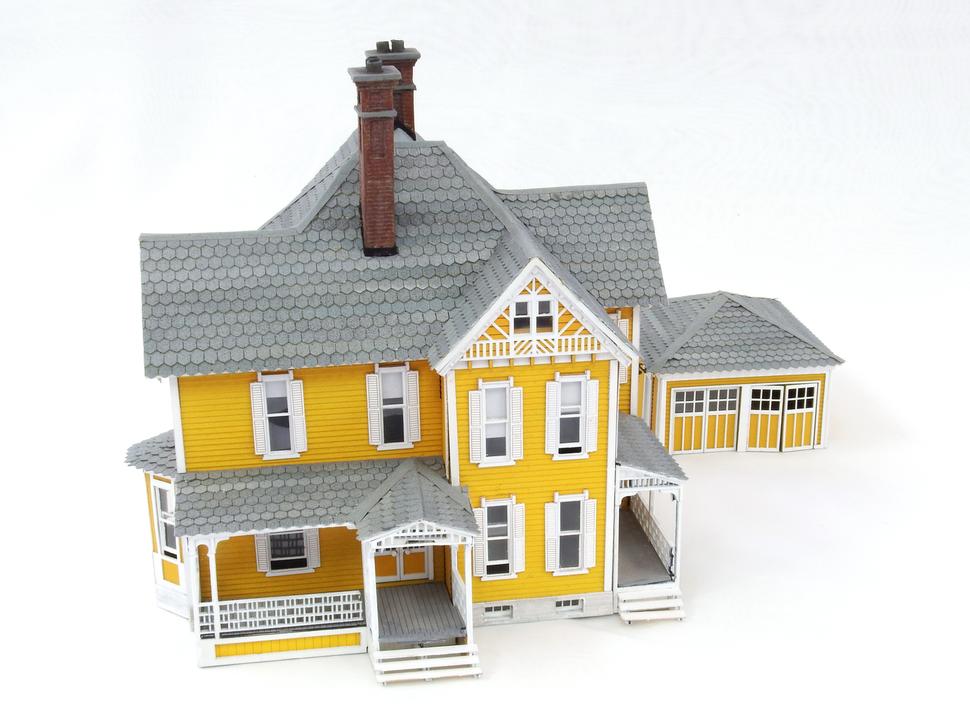 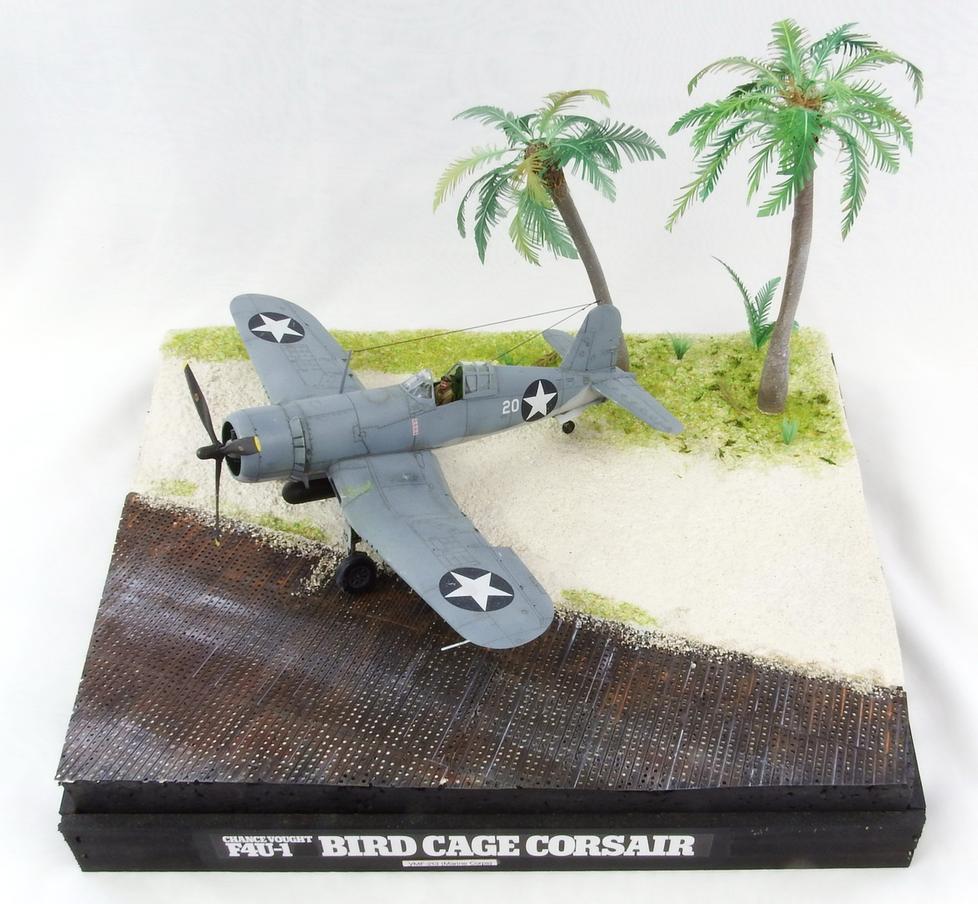 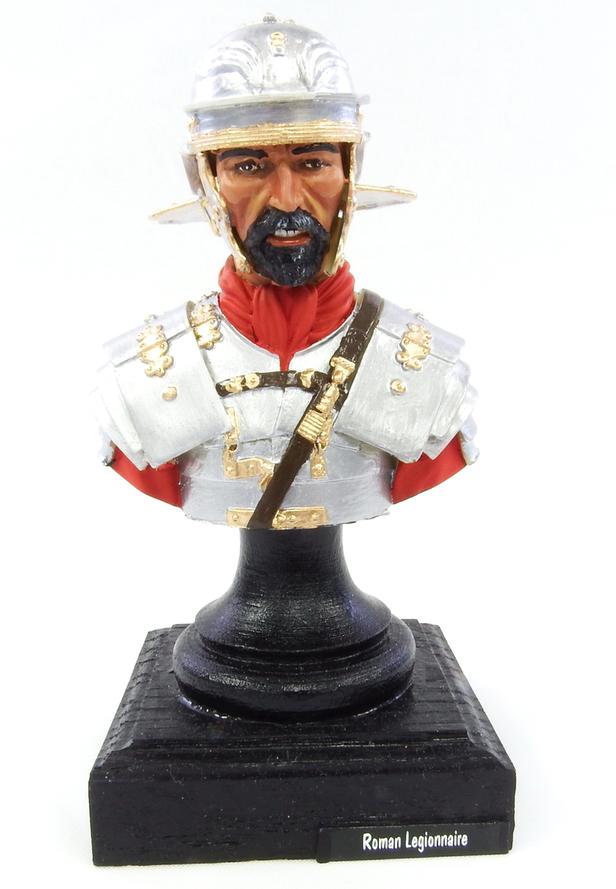 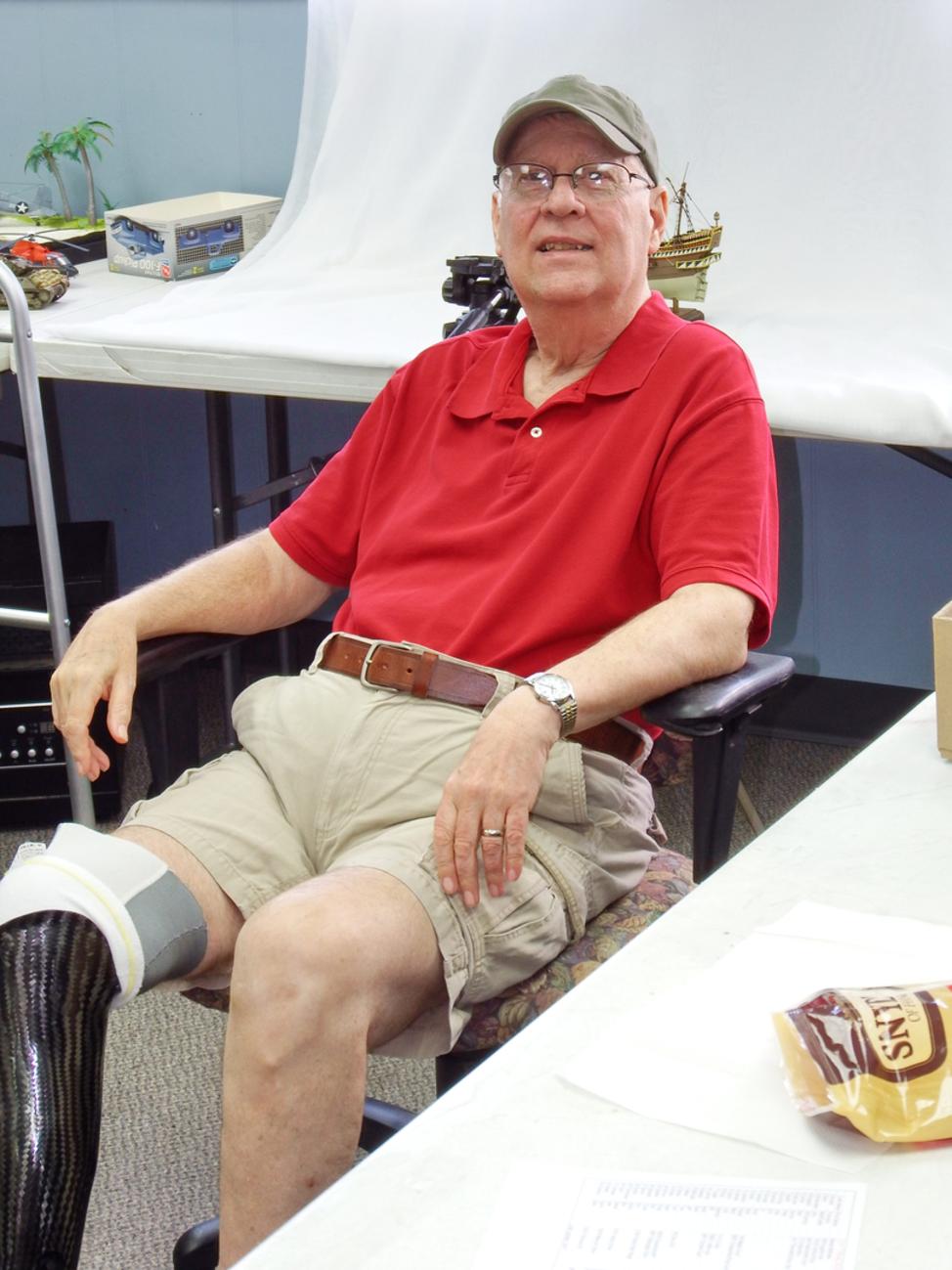 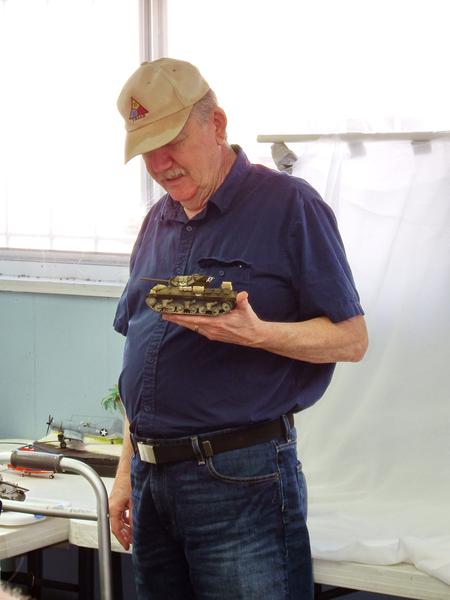 Mark Beck brought in his chromed dummy 25mm round used in the Marine AV-8B Harrier jet.  I got completely lost on who else might use this round and who might be switching to a 30mm or 35mm round.  But I know enough not to be on the receiving end of one of these babies.  And Mark said the decals went on without problem…or not!  Thanks for sharing, Mark!  (I had to remove it from its display case to photograph it.)

Keith Lemke brought in a Revell ’32 Ford Highboy he built a few years back.  Fortunately, Keith has a nice big garage where he can store it!  It was built mostly out of the box with new tires and wheels!  Great Job, Keith!

More gorgeous armor comes to us thanks to Stan Carrier.  First up is his Jagdpanzer.  Stan built this from the Tamiya kit and used Tamiya paints and Mig pigments.  Next is his Zvezda T-26 tank in winter camo.  Wow!  Look at the chipping and mud!  Wow, again!  Stan really liked the Mig mud effects and he managed to combine wet mud with dry earth.  Great!

Skill level 1.55 built this 1/87 Laser Art Dubois house and Cadillac garage for Tom Ralya’s HO scale trolley layout.  Upon seeing it, Tom said if he wanted c**p like this on his layout, he’d build it himself.  Or something like that….  ;-)  The kit has well over 500 parts.  The house has 46 windows and 13 roof panels.  The windows with shades are made from nine parts!  After being rejected by Ralya, Al George took taken pity on it and will utilize it somewhere on the HoH train layout.  Probably inside the tunnel…. 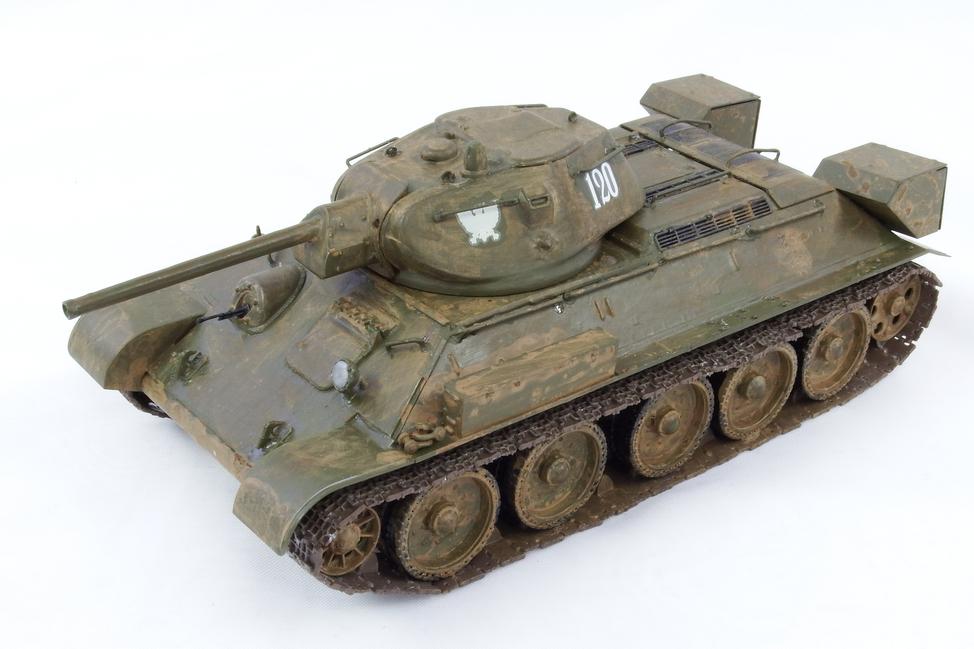 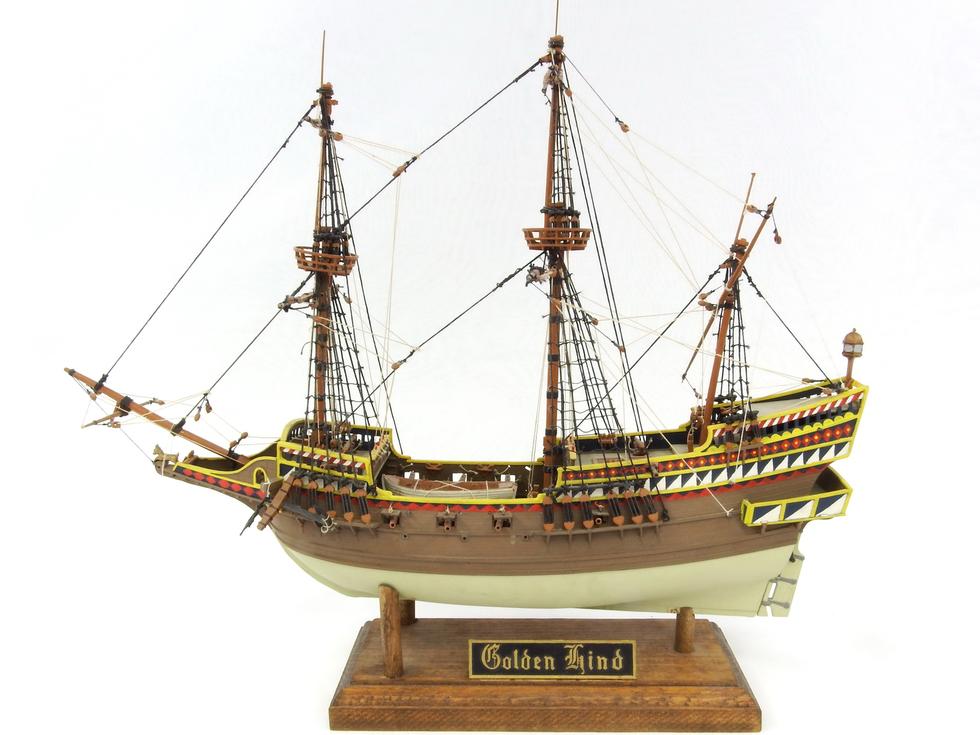 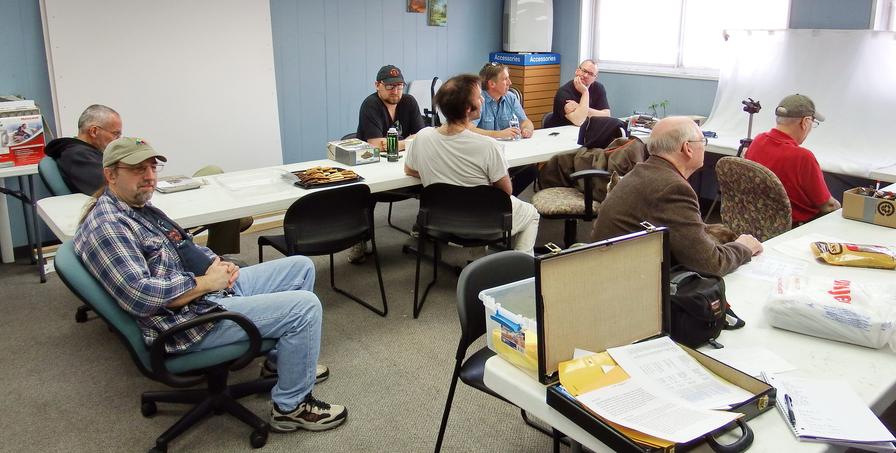 The Pres, JR Burggren, brought in a car which actually hurt our eyes!  The photo doesn’t capture the true brightness of the paint job…but it looked great!  This oval track stocker was an AMT kit of a 1960 Chevy Bel-Air.  JR added a roll cage and an interior, bumper guards, and wider tires.  This looks great!