Old Man Thompson showed us he’s still got it.  We’re hoping the medicine will clear it up whatever it is!  Seriously, Bob just completed this 1975 Monogram/Revell M4 Sherman “Screaming Mimi” tank.  Once again, Bob took advantage of the original plastic color, OD, and added the decals and sprayed with Dullcote.  You’d never know it wasn’t painted…except I just told you!!  Bob weathered with Tamiya “makeup” and painted the figures with Vallejo acrylics.  Another great job, Bob! 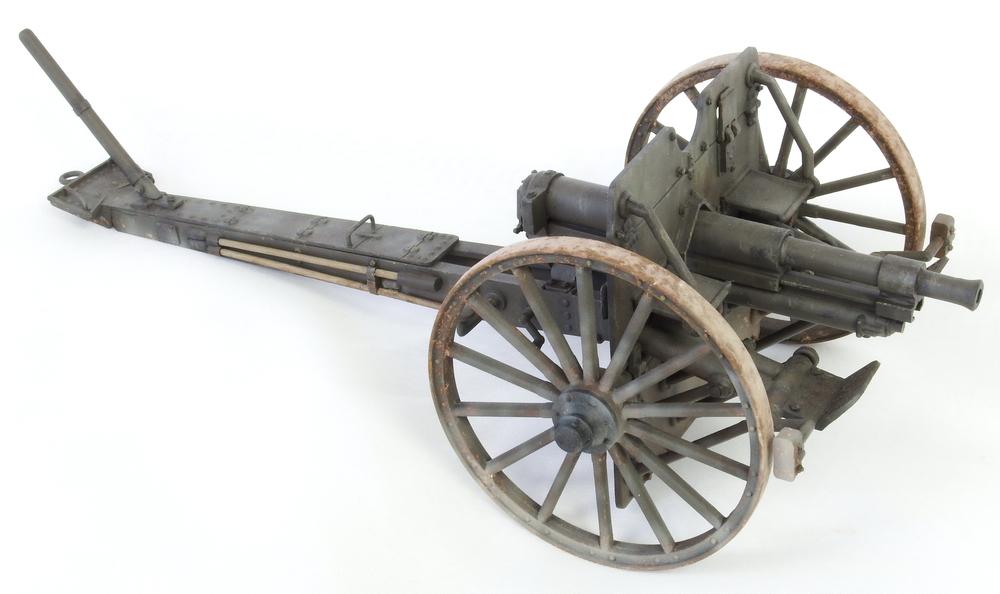 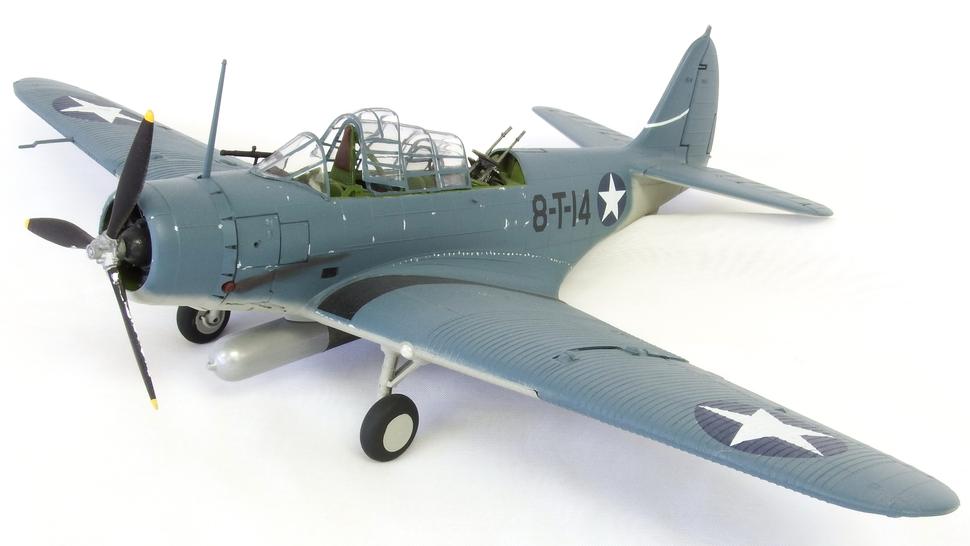 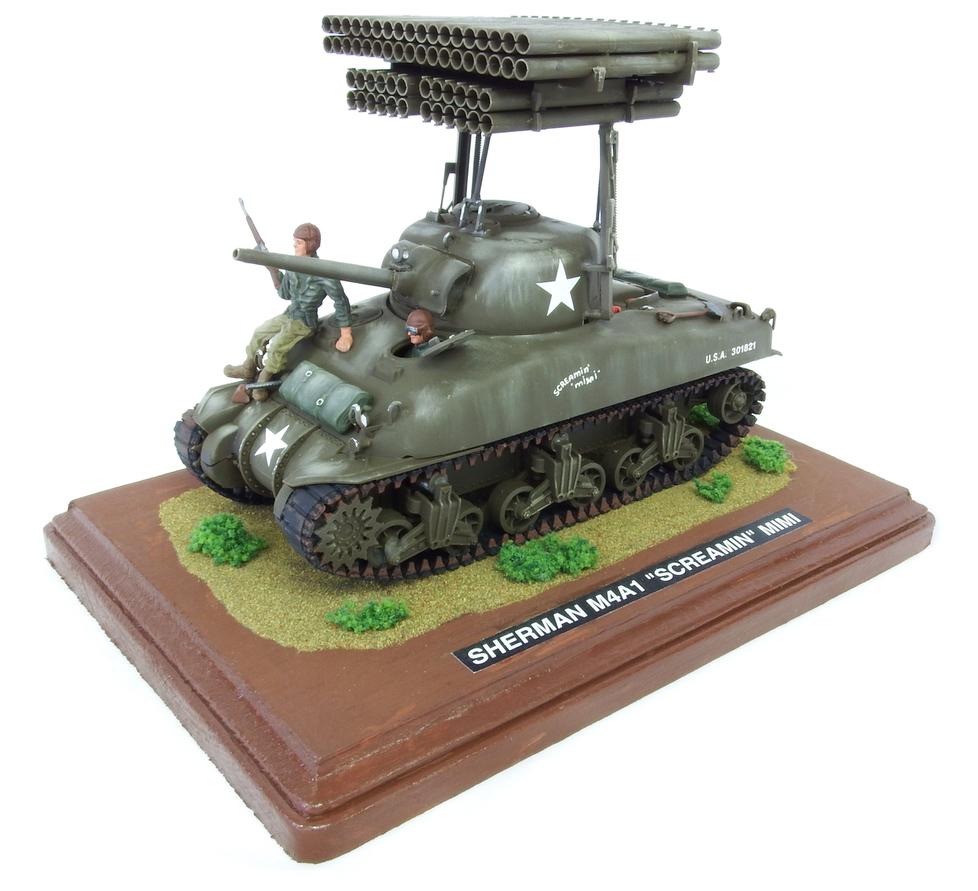 Darrin Watts brought in his favorite disaster…a Porsche 935 “Moby Dick” from Tamiya.  The disaster came about as the kit decals did not behave when sprayed with a gloss clear coat.  He may attempt a repair.  Darrin says it looks great at twenty feet…I think it looks great at a much closer distance! 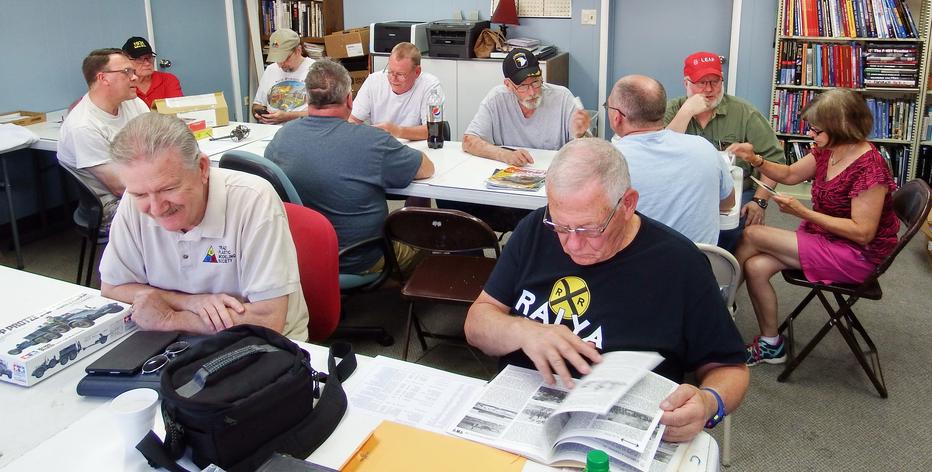 Mr. Feller Dewitt finally got around to building a P-51 Mustang!  About time!  Oh wait…I’m slightly confused…this is his tenth 1/48 Mustang…to go along with his 122 1/72 scale Mustangs!!  Well, he did a bang up job with this Hobby Boss kit.  Feller said it was a simple kit without any frills.  He used Model Master Paints again and decals from his extensive spares box.  Keep up the good work, Feller!

Here are two photos of some of the 18 who were in attendance.  Great to see Judy Jayne at the meeting!  I don’t know what is worse, Jerry B giving me the stink eye or him laughing which makes me wonder what he’s up to.  And Alan Vandam is checking out his dinner.

Doug Seekman blows us away with another aircraft model.  This is the old Monogram TBD Devastator circa 1974-1975.  He used Model Master paint but he used a more realistic color than what is called for.  He used Aeromaster decals and used a white metal .30 cal machine gun.  This plane represents the plane flown by George Gay who was the sole survivor of Torpedo 8 during the Battle of Midway.  Sweet!

Direct from the homepage, here is Tom Howard’s 75mm 1902 gun.  This was the 1960’s Palmer Plastics kit (never heard of them).  To the stock kit, he added Verlindin’s nuts and bolts set, Evergreen rod to make the bore cleaner rods, grab handles, etc..  He also drilled out numerous holes on the foot rest plates.  He weathered with Tamiya black panel liner, Mig dry mud, and Tamiya Buff sprayed overall for dust effect…which was very effective!!  This is just cool! 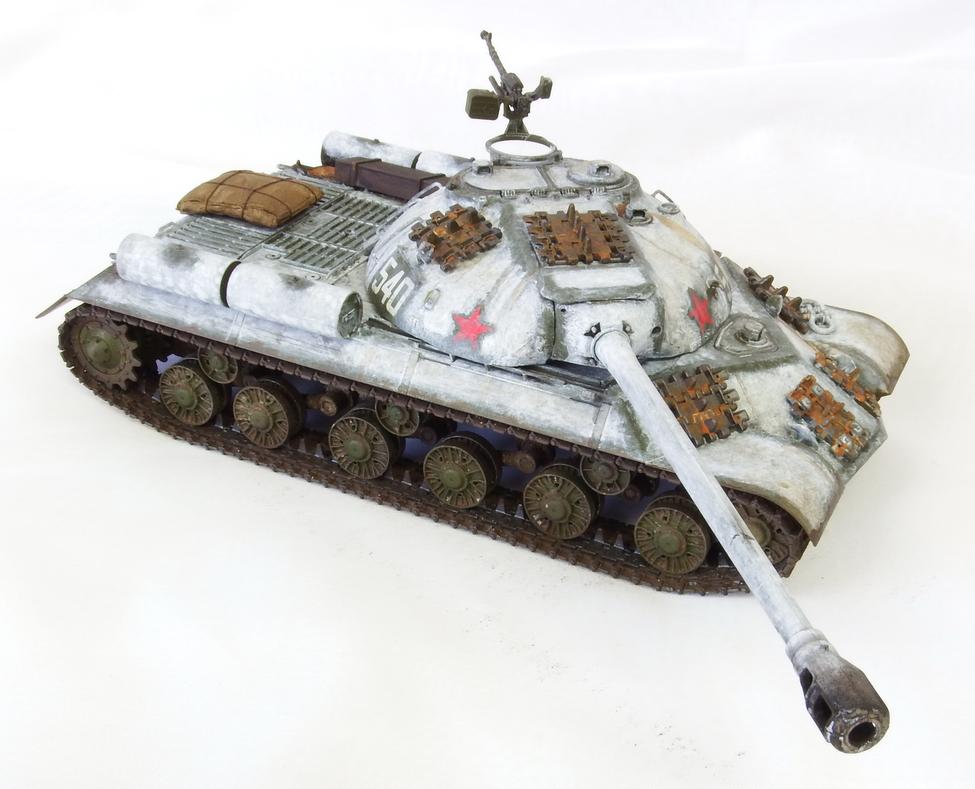 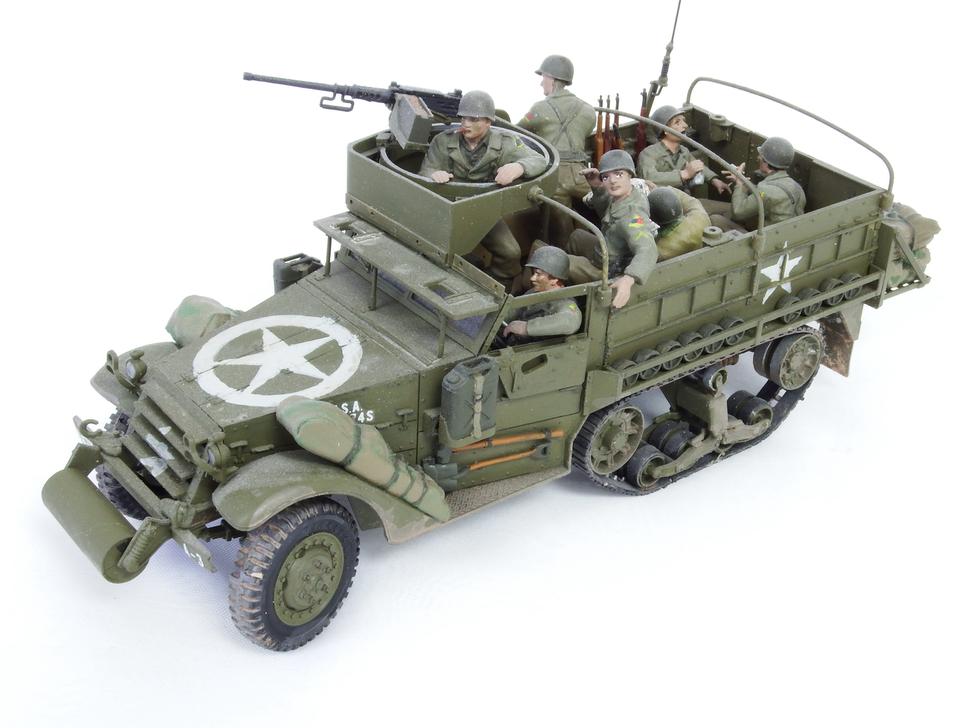 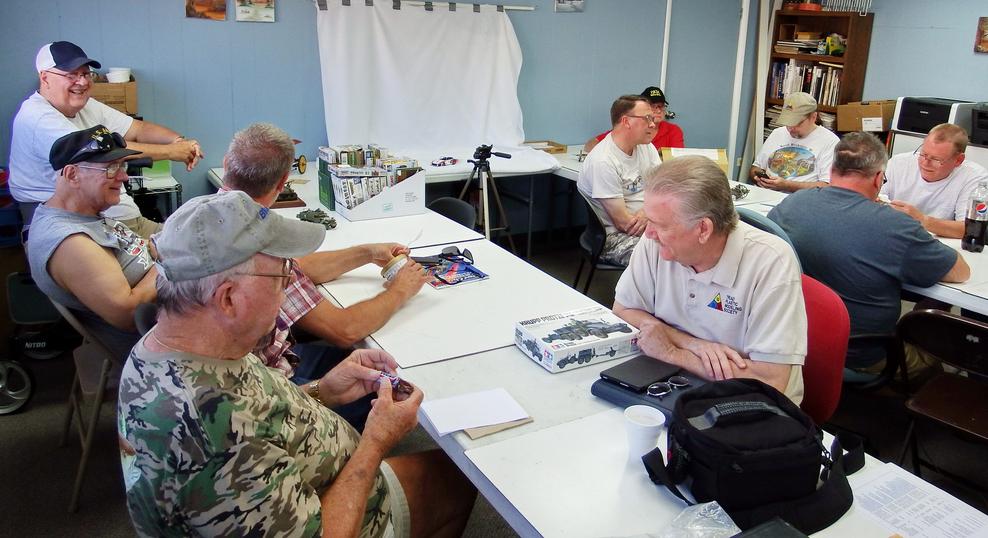 See ya the July WS at NOON!!

From a time long, long ago, Prof Bill Leger built this M-3 halftrack with lots of cool figures…and to some he added cigarettes and other details.  This 1/35 Tamiya build looks great and thanks for bringing it in!

Stan Carrier brought in the Russian IS-3 that he entered in the Ridout Challenge.  The more I look at this model, the more I realize I voted for the wrong armor model.  His brother Matt started it ten years ago and now Stan has completed it.  His weathering techniques are top notch.  He watered down some acrylic white paint and then painted the tank with ten coats…removing the paint from wear areas.  He also used Life-Color rain streaking effects. Is it too late for me to change my vote?

Keith Lemke brought in an awesome 1/8 scale Pocher 1907 Fiat 130 HP-F2.  Keith says it would have looked better if his brother hadn’t knocked it off a 7’ high shelf years ago.  Keith’s Aunt purchased this for him in the 1970’s for around $135…big money back then.  It is made up of plastic, steel, iron, aluminum, brass, rubber, and leather.  It took Keith three hours to put this baby back together but some parts are missing.  Still looks way cool! 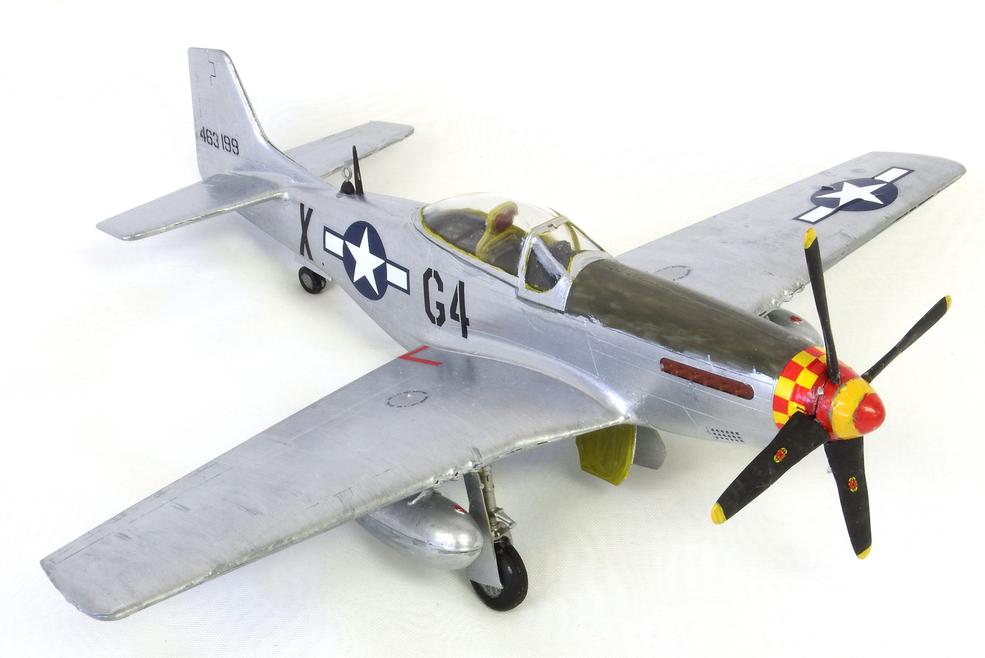 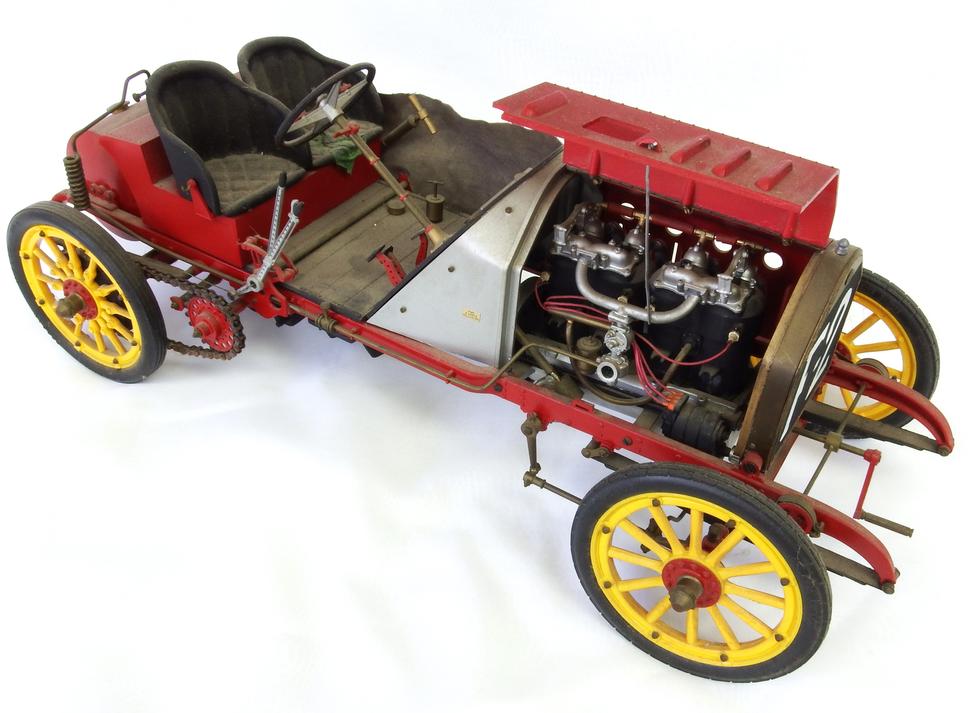