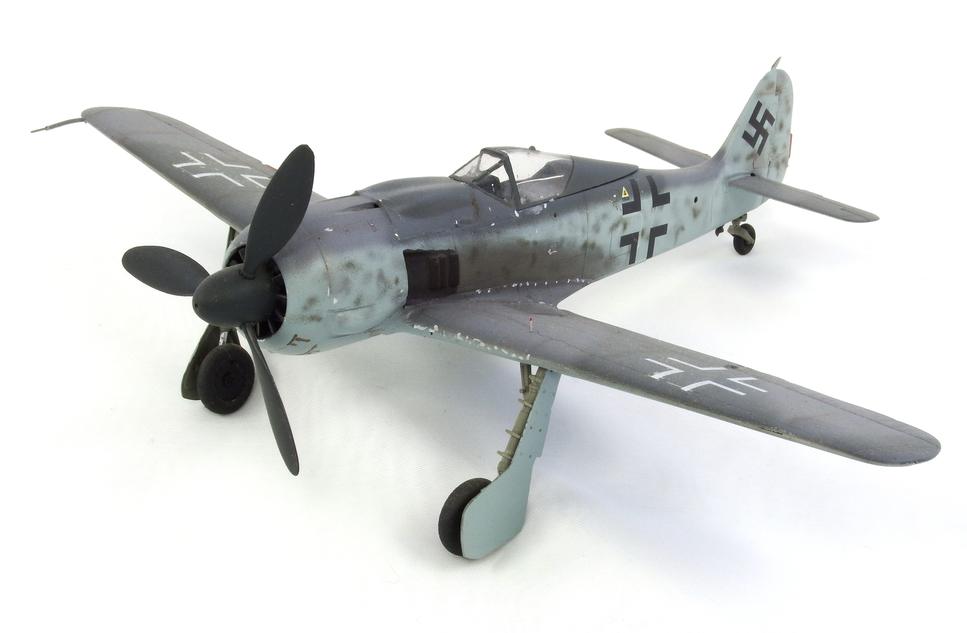 See you at the July Work Session...everybody be safe..... 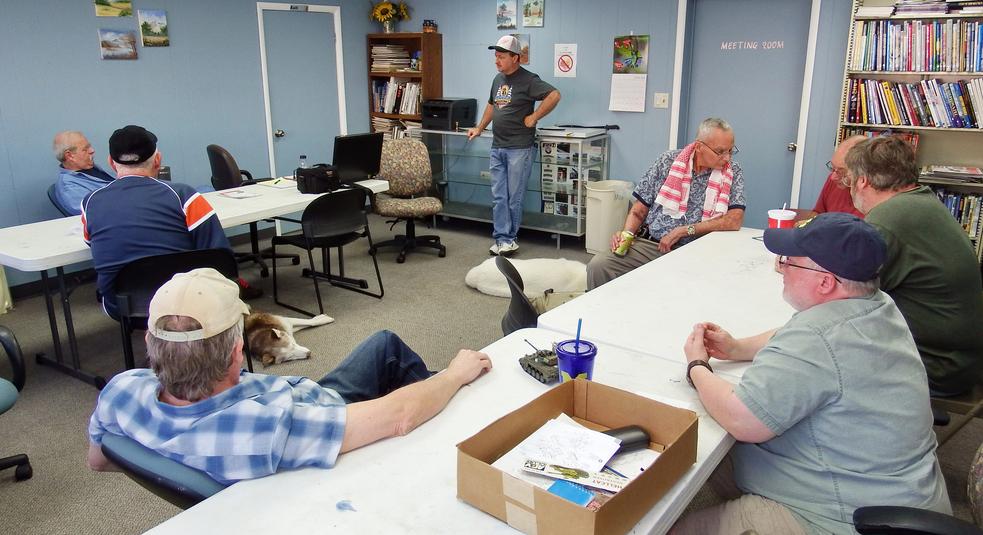 Let’s kick off the S&T with two models from Brad Hicks.  He tried to fool us into believing his M18 Hellcat tank destroyer was a Tamiya kit…but actually it was an AFV Club kit.  I hope Tamiya doesn’t hear about this!  I think he’ll go crawling back to Tamiya…the kit sucked with poor fits.  It did have a brass barrel.  His second model is from Tamiya, an SdKfz 250/9 halftrack with a 20mm AA gun and a MG34 machinegun.  Brad wasn’t too impressed with the link and length tracks.  He used Model Master paints on this 1980 kit.  This particular vehicle was used for reconnaissance.  Nice job on both, Brad.  In the third photo, he is showing off his models on one of Dan Jayne’s bases…just to make the Rust Master happy!  ;-) 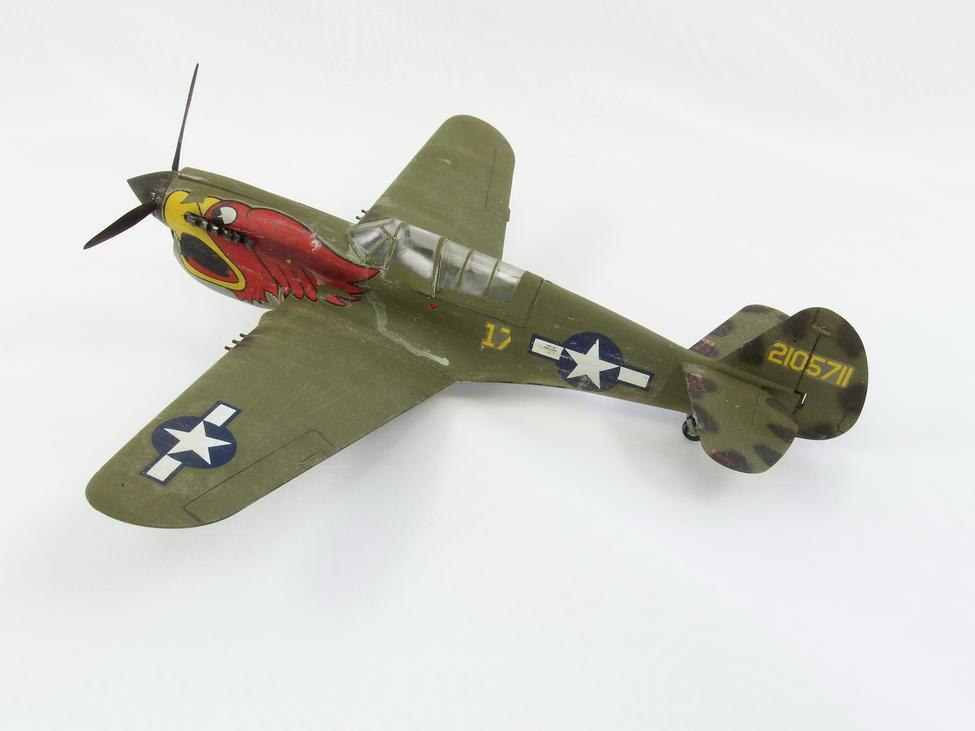 Joel Boon knows how much Bob Thompson likes military motorcycles so he built him one!  How nice…and good job Joel!  Enjoy, Bob! 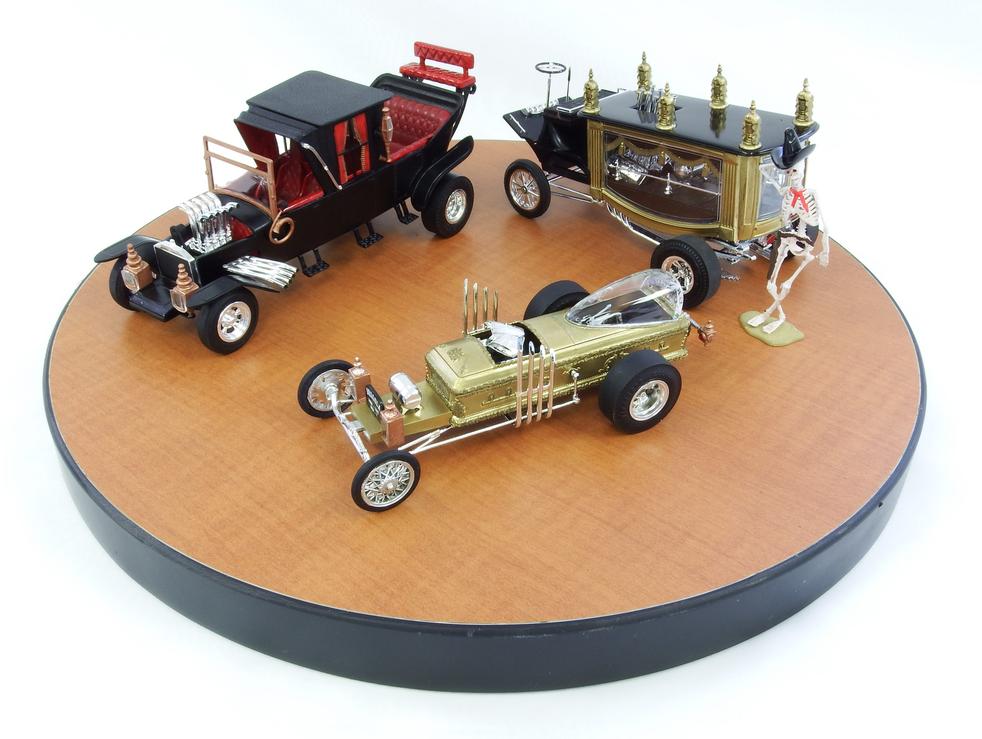 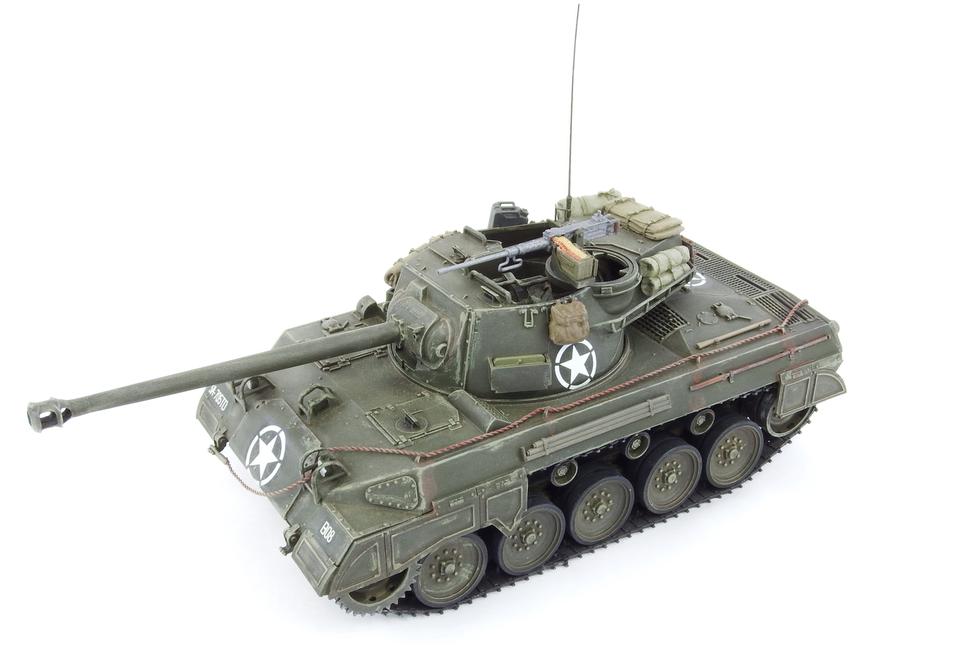 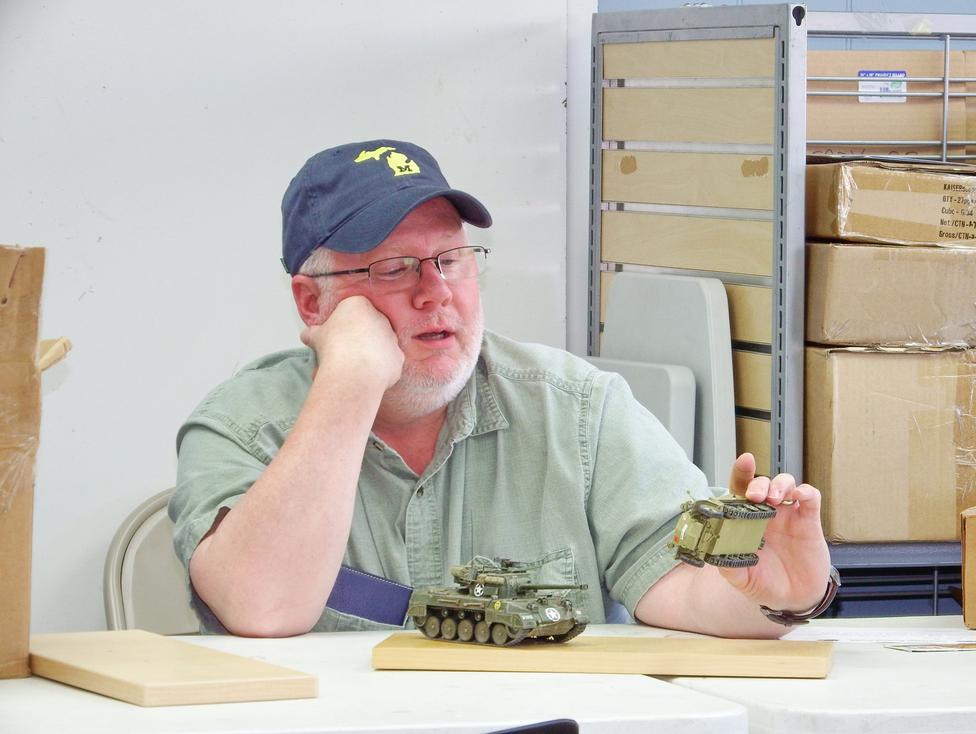 If these guys look familiar, they are!  You saw these Masterbox figures with Big Daddy Jerry Bridenstein’s WWI British tanks that he entered at the Tim Ridout Challenge.  One is an officer and one is a crewman.    Very nice, Jerry!  Hope Bob enjoys them! 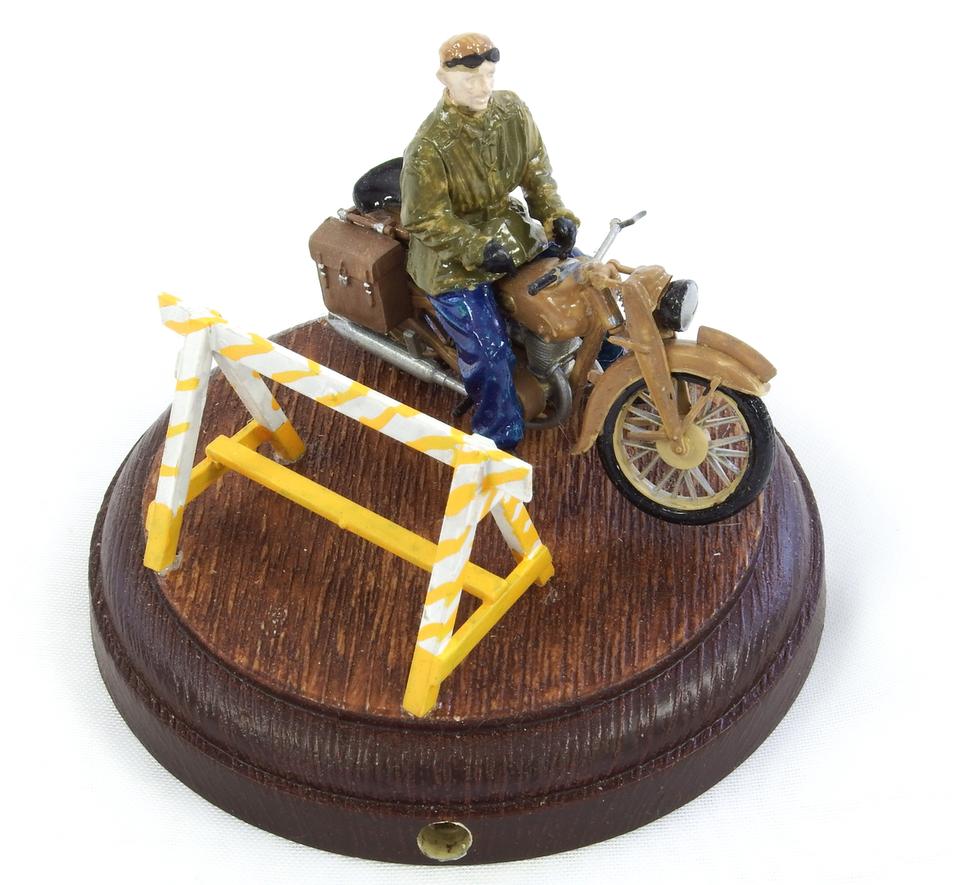 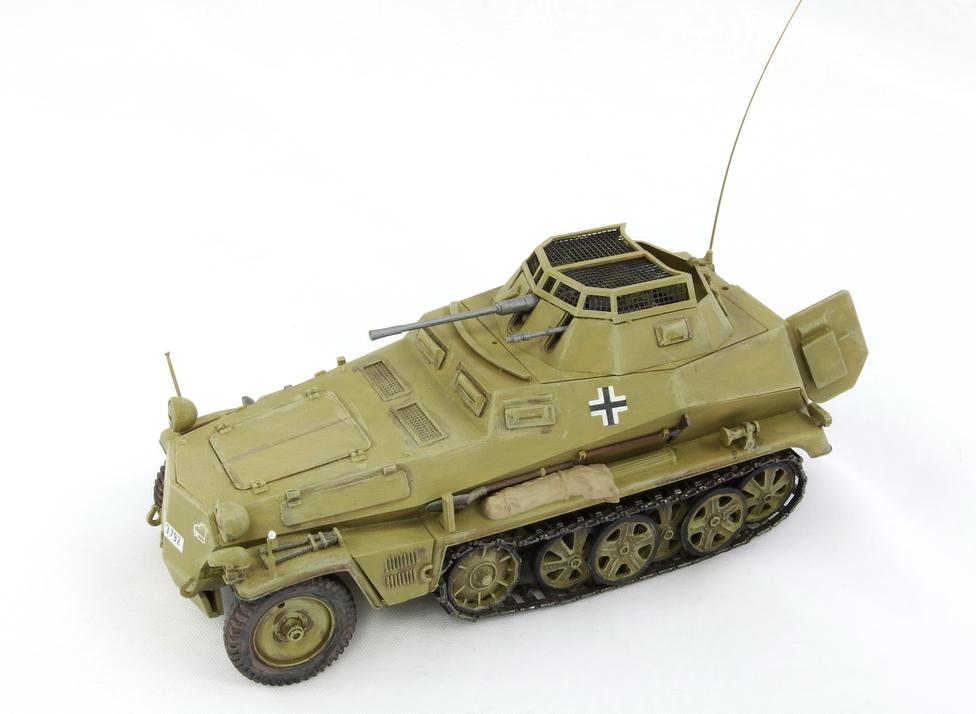 Mark Jahsan, who recently underwent some hand surgery, built these three fun vehicles over the last three months as his idea of physical therapy.  He had these kits for twenty years.  Looks like it worked!  On the top left we have the 1/24 AMT Master Koach and on the bottom is the AMT Draqula.  Both were originally built by the legendary George Barris.  The top right is the 1/24 Monogram Boot Hill Express.  They really used a horse drawn hearse, circa 1850, when building this car.  It was too fragile to operate.   Awesome job, Mark!  Nice change of pace! 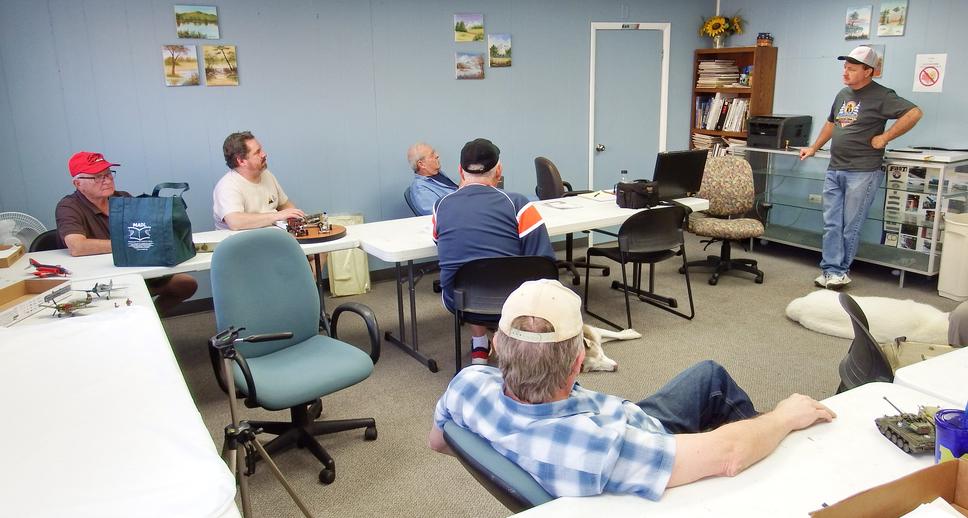 Here are two photos of our President addressing the group.  The dogs are saying, “We’ve heard it all before….”.

Here is Feller Dewitt's German Phantom F4-F in the standard camouflage paint scheme.  Eh, maybe not.  Feller hand painted this beauty with Model Master paints to celebrate the 25th anniversary of Richthofen’s squadron.  All was going well until an electrician picked it up and snapped off the nose gear.  And the decals were a bear, too.  Nice job, Feller.  Sorry about the nose gear!

Doug Schuur brought in two beautiful aircraft models.  First is his AMT P-40N Warhawk and he used Superscale decals.  This plane was used as a trainer.  He used a True Details resin cockpit and it fit perfectly.  The second model is his Dragon Fw190-A8 which sounds like it was a poor excuse for a kit.  But both models are very sharp.  Nice job, Doug!