See ya at the May Work Session! 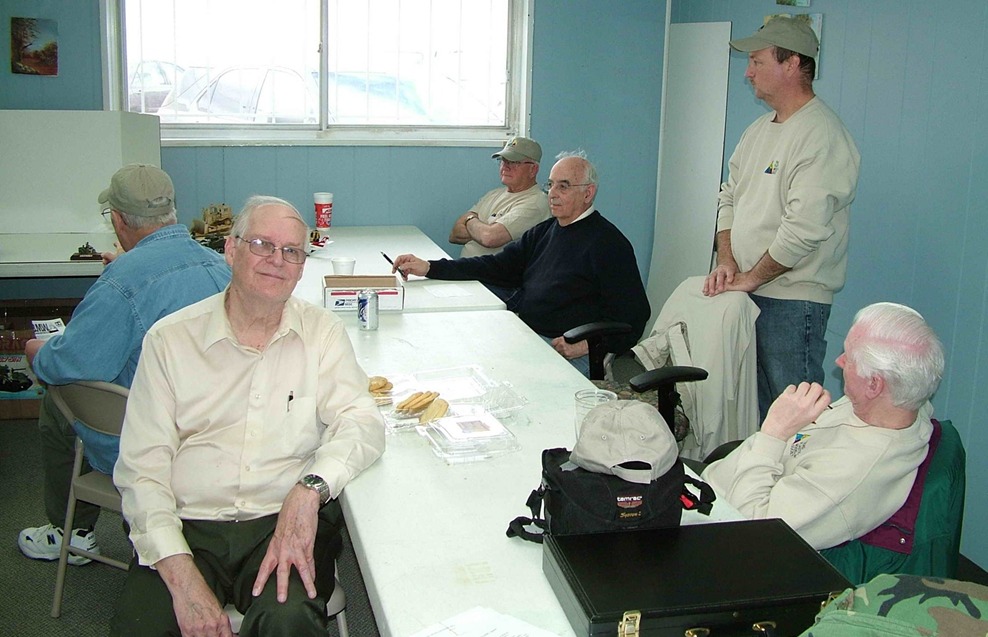 How???  How can Al George talk and sleep at the same time??? 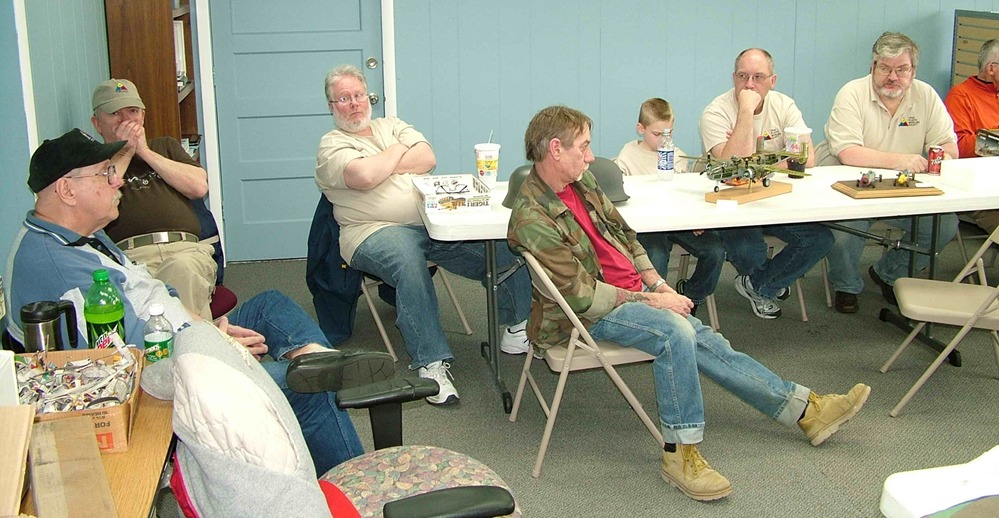 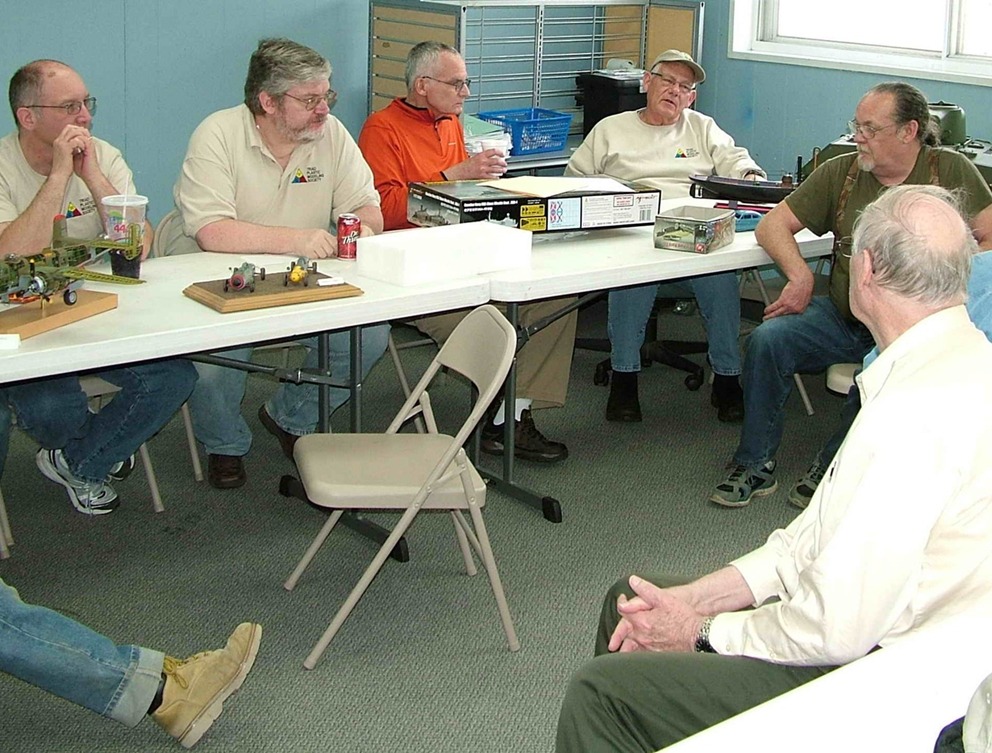 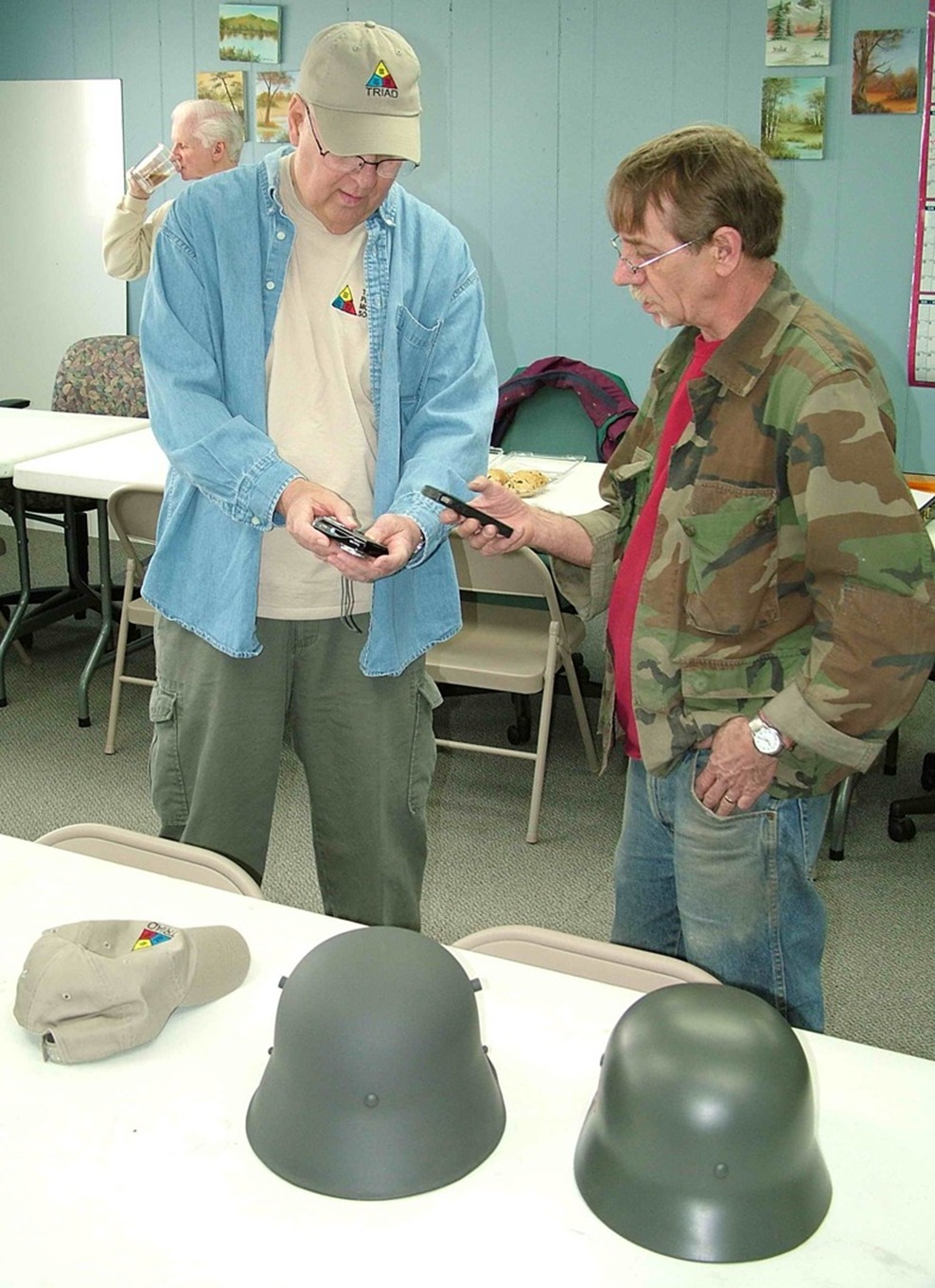 Ok…let’s wrap up this madness with a few photos. 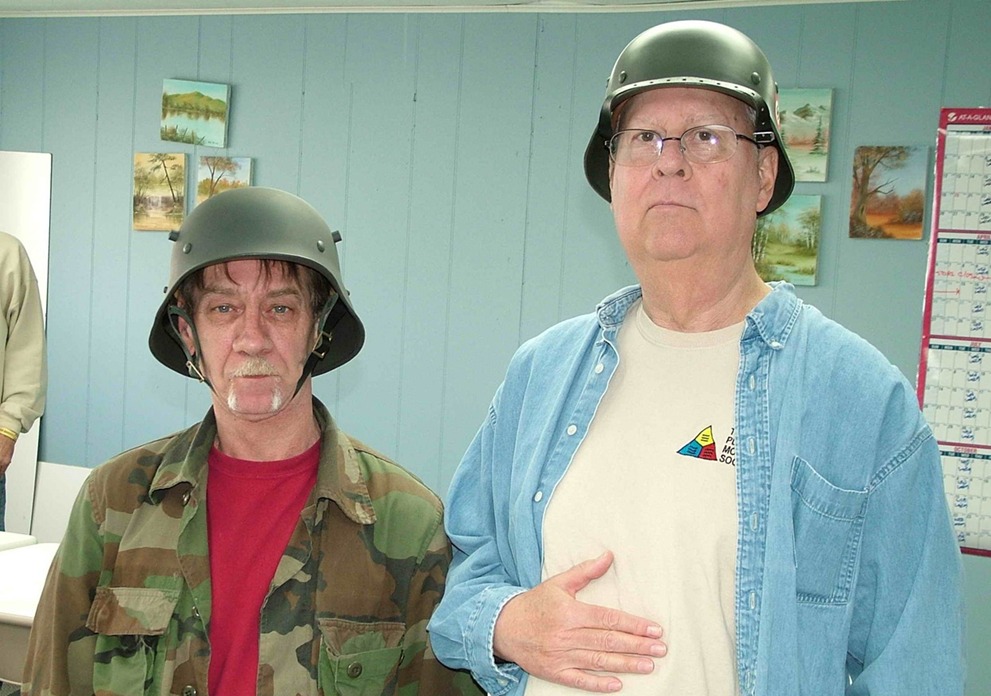 Remember the part where I said something in Dan’s brain may have snapped?  We know something snapped in Bob’s brain quite some time ago.  I have nothing further to say....   ;-) 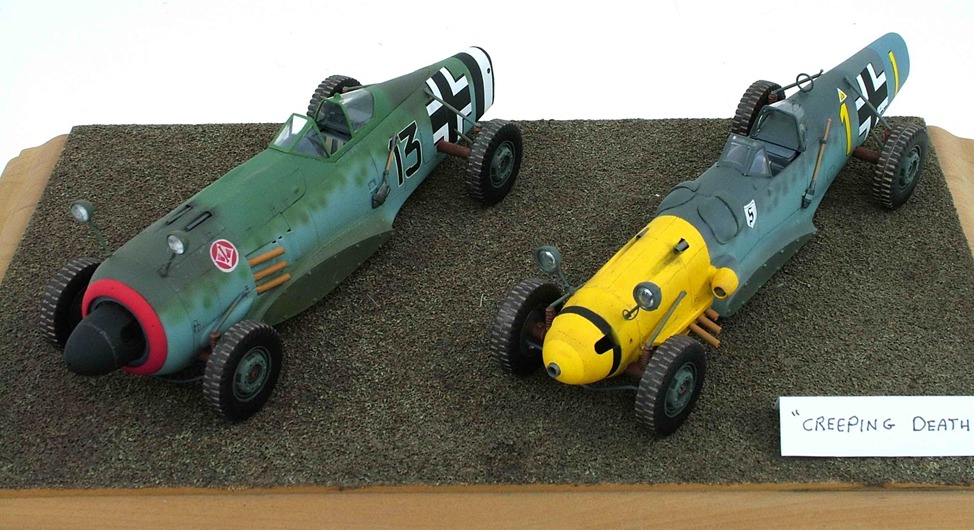 In this next photo, we can see that Dan may have “stressed out” on the B-25J and something snapped in his brain…how else do explain these models?  These vehicles are made from extra German fighter fuselages.  Sure, everybody does this stuff…..  I think they are cool, cool, cool!  He calls them "Creeping Death".... 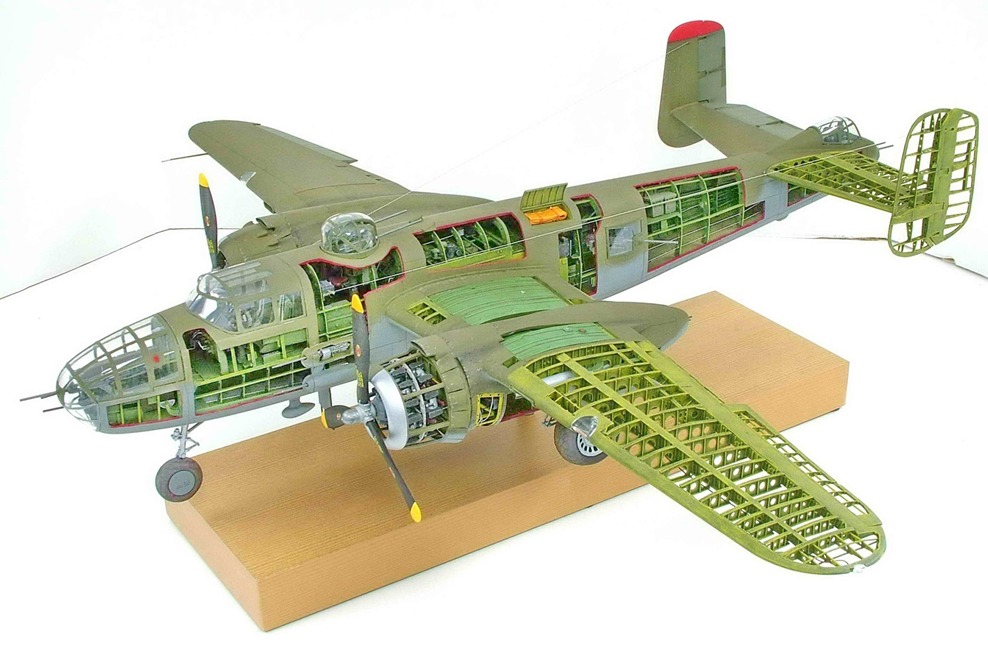 Yes, I saved the best for last.  Here is Dan Jayne’s long awaited 1/32 HK Models B-25J cutaway.  It was worth the wait.  Darn he’s good.  Talk about attention to detail…the kit came with realistic flat spots on the tires…but with the port landing gear in motion, you can’t have a flat spot.  So Danny took the time to add putty to the flat spot, reshape it, and add tire tread.  What a guy!  Skill level 1.55 will soon be taking photos of this beauty and sending them to FineScale Modeler magazine. 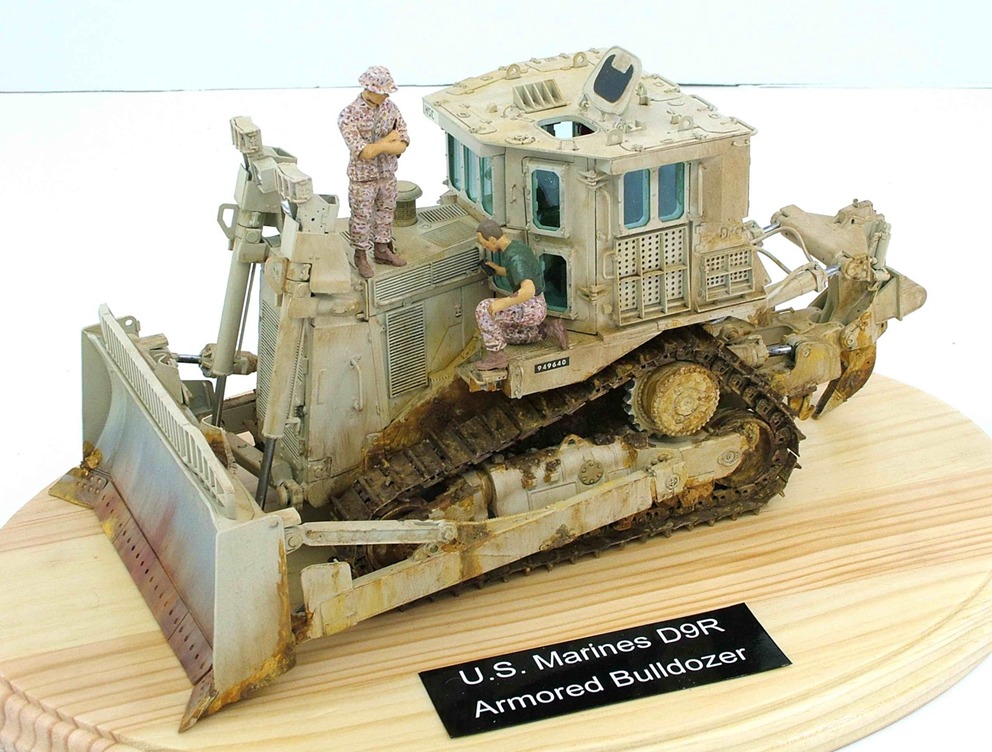 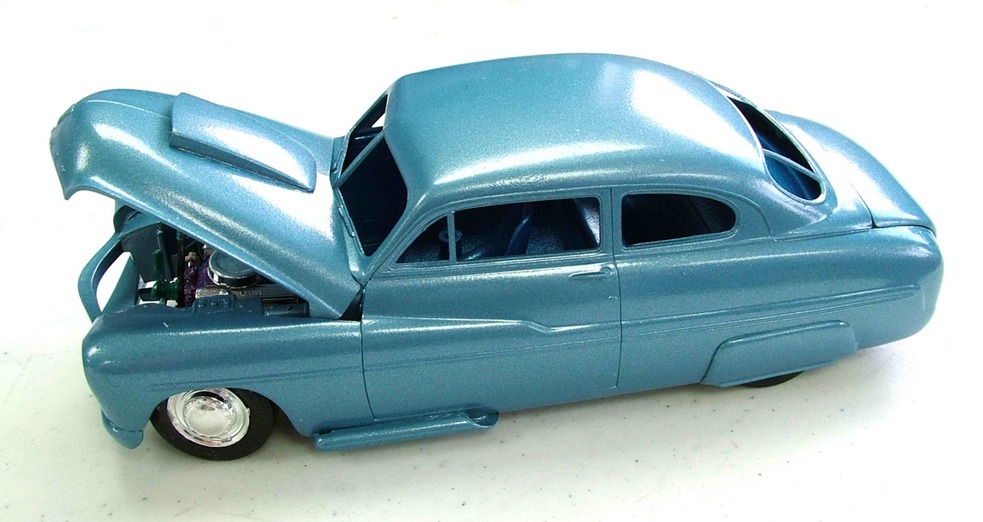 Our infamous VP brought in his MENG Cat U.S. Marines D9R armored bulldozer.  This 1/35 kit was one of the nicest kits he’s ever seen…if you overlook the three-part track links which are impossible to work with…they ended up in the waste basket once.  He added two Trumpeter figures to give a sense of scale.  The kit included tinted windows and a nice interior.  The blade and ripper move up and down.

New guy, Ken Boucher, brought in his WIP Mercury.  Extremely nice.  If the paint job looks nice…it is…and he did it with a rattle can.  This guy is good! 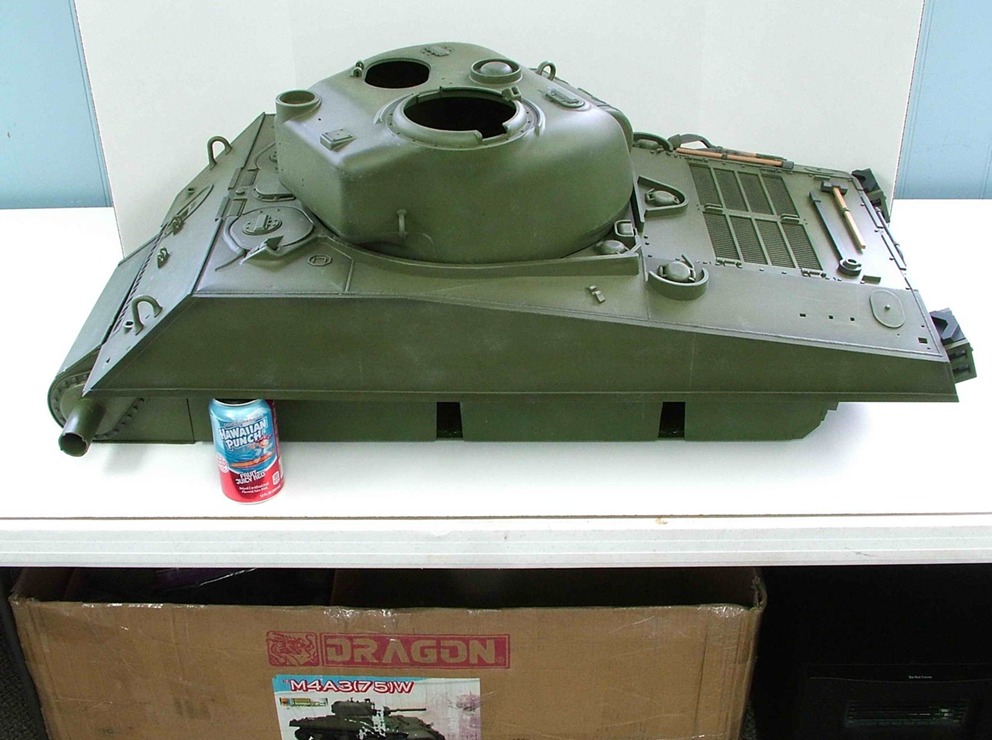 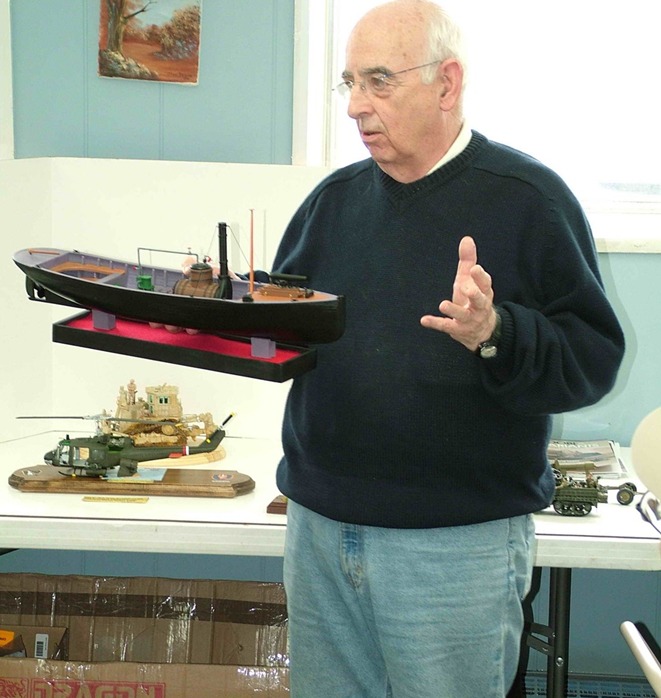 Go figure.  The guy who builds our smallest models is about to embark on building the largest tank model we have ever seen…a 1/6 scale Sherman M4A3 for the Silversides Museum.  Cost of the kit?  $850.  So we wish you good luck and a strong back, Al George!  (I placed a 12 ounce can next to the chassis so you can gage the scale!) 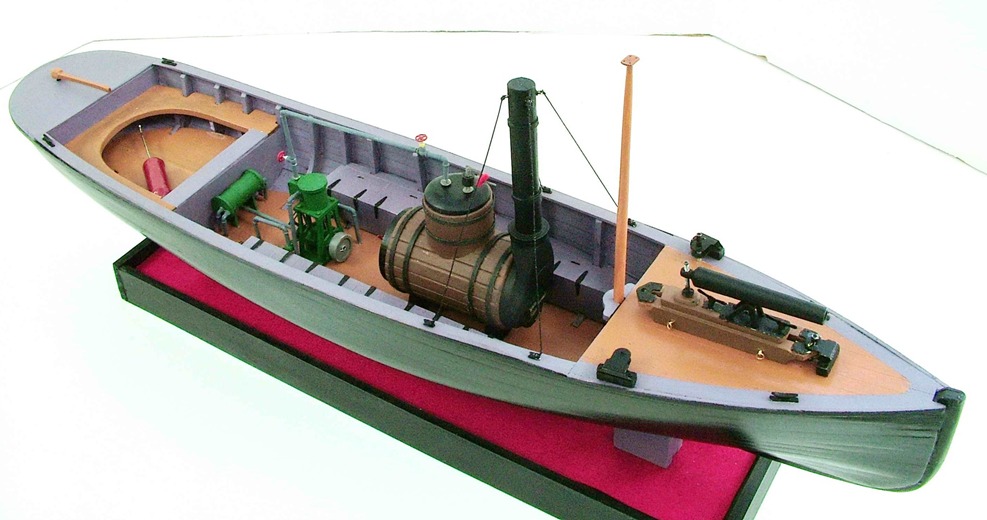 Francisco “Alfredo” Alvarez has finished his latest wooden boat model in record time.  Oh, “Alfredo”?  Bob Thompson accidentally called Francisco “Alfredo” and we kind of liked the name!  Everybody needs a nickname!  Hope he likes it!  But for sure we liked his Picket Boat #1 which was the only Confederate boat to sink a Union ironclad.  Everyone was amazed at his modeling talents.  And I think I met his brother at Olive Garden…Chicken Alfredo!  ;-) 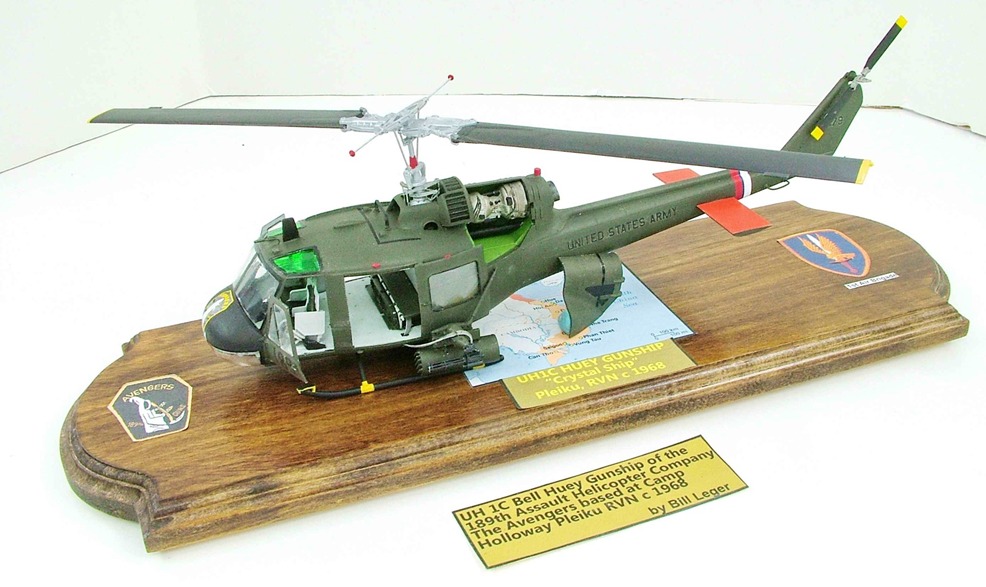 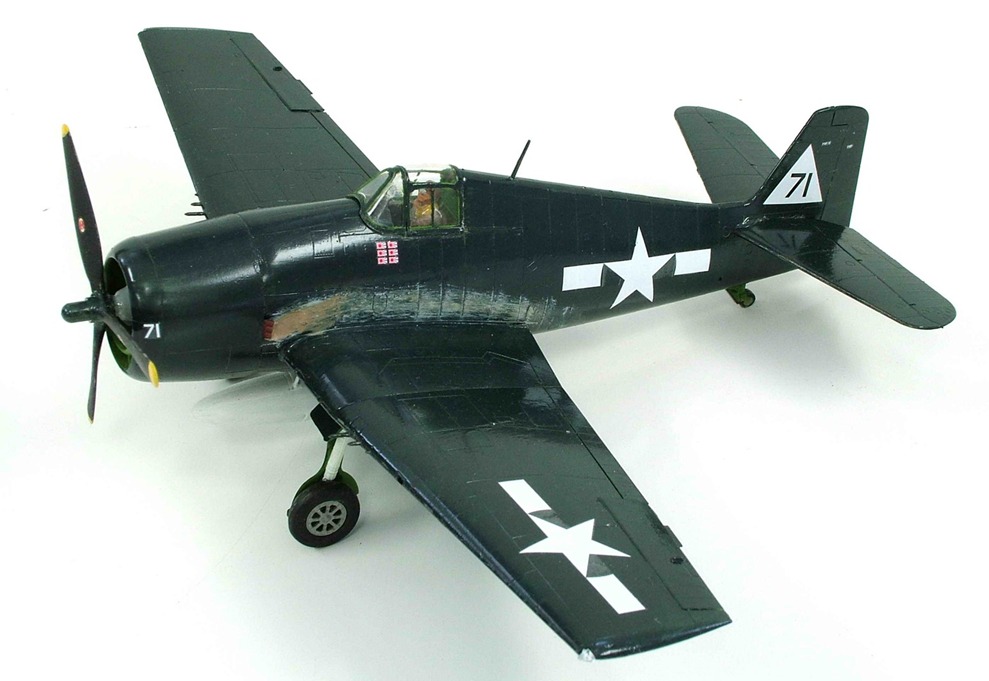 Master Caleb Beck showed off his latest Lego creation which he call the Beetle Fighter.  It is a “scratchbuilt little fighter” according to Caleb.  Very creative…Dan better watch out!  His Dad, Mark, built the model on the left and it is a ATAT spacecraft from the Stars Wars Clone Wars.  It was painted per the animated version and is a snap fit kit from Revell.  Nice work, Boys!

Our beloved Feller Dewitt never fails to deliver a great looking model…and a great story to go with it.  Here is his handsome Hellcat F6F-5.  Eduard said this was a weekend project…Feller says they lied!  He also said the kit had a lot of parts…many of which are still buried in the carpet below his workbench!  He hand painted with Model Master Enamels.  Thanks, Feller! 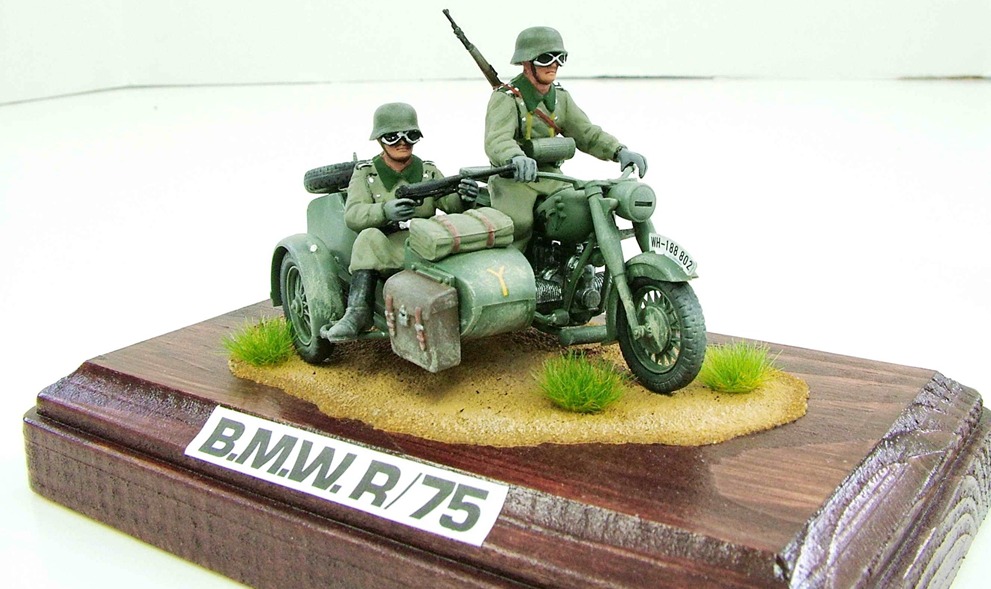 Poor Bob Thompson.  He was the target of many of my humor attacks today and to his credit, he took them like a man and in good humor!  But his German BMW R/75 motorcycle with side car and two figures was no laughing matter.  Look at those dudes with their goggles.  Serious stuff!  Bob loves Tamiya kits and you can see why.  He used acrylic paints and Tamiya “make-up” to finish the job.  Great work, Bob!  And thanks for your sense of humor! 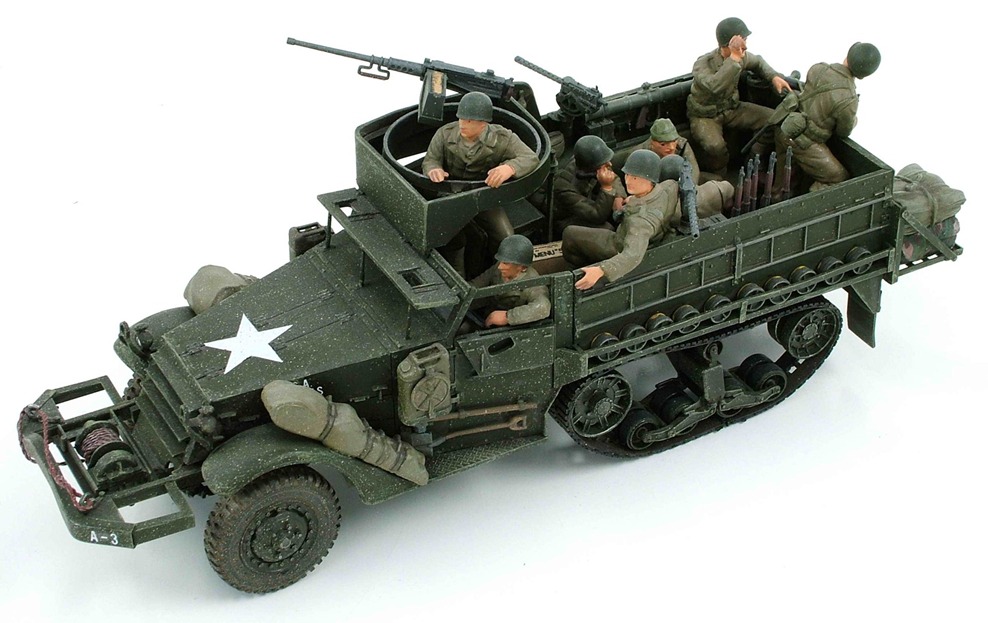 American Armor guru, Brad Hicks, brought in a beautiful Tamiya M3A2 troop carrier from Tamiya with Tamiya figures.  Brad shared his struggles as his airbrushed weathering ran into trouble and his wife accidentally damaged the model.  But in the final analysis, the model looks fantastic! 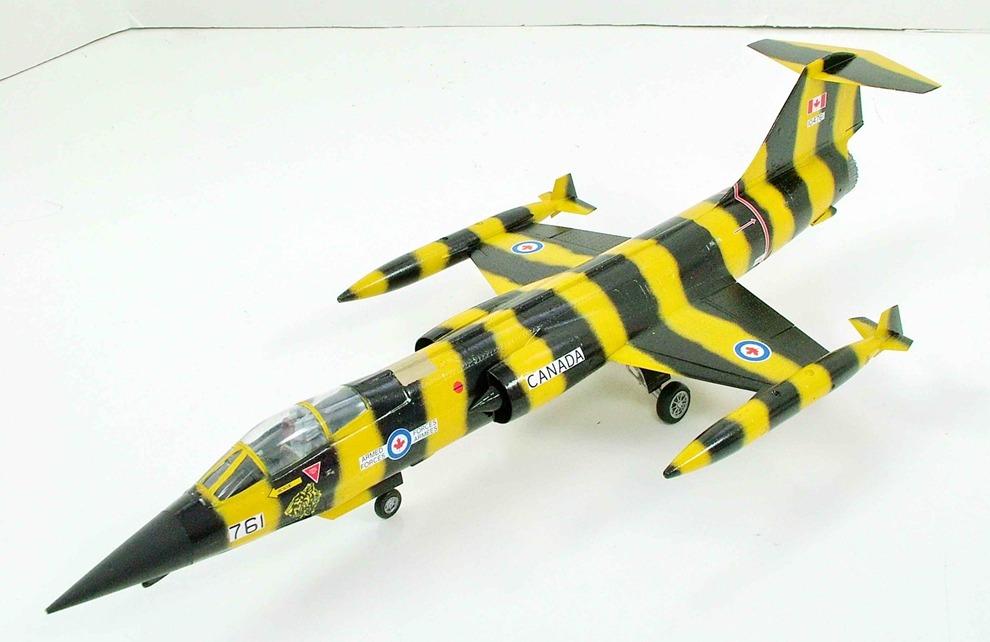 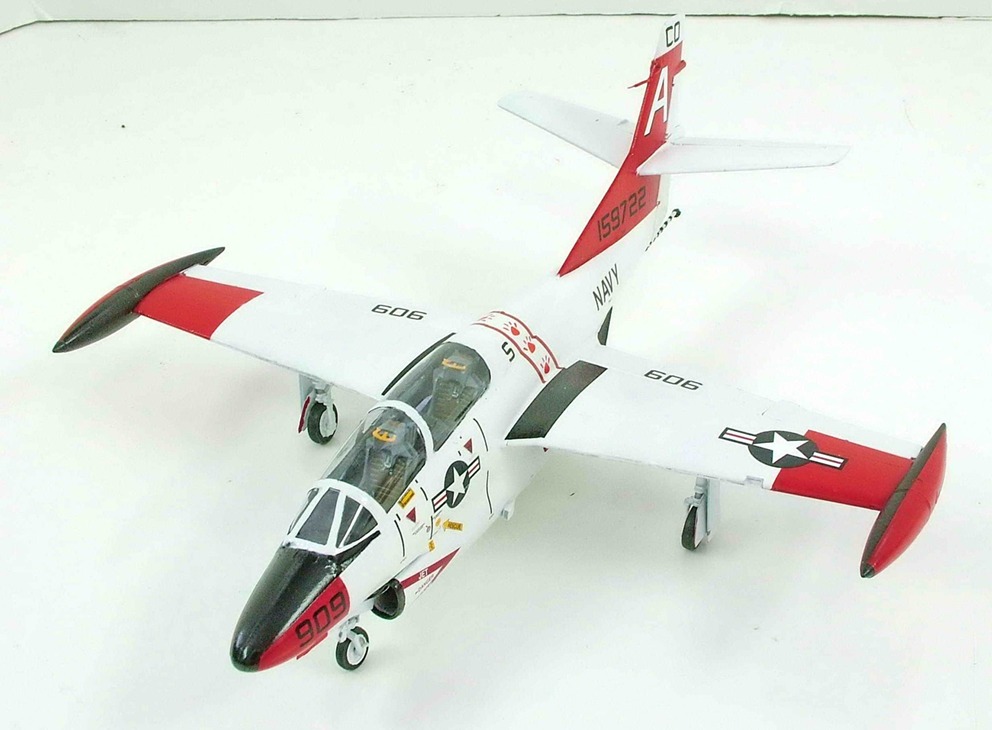 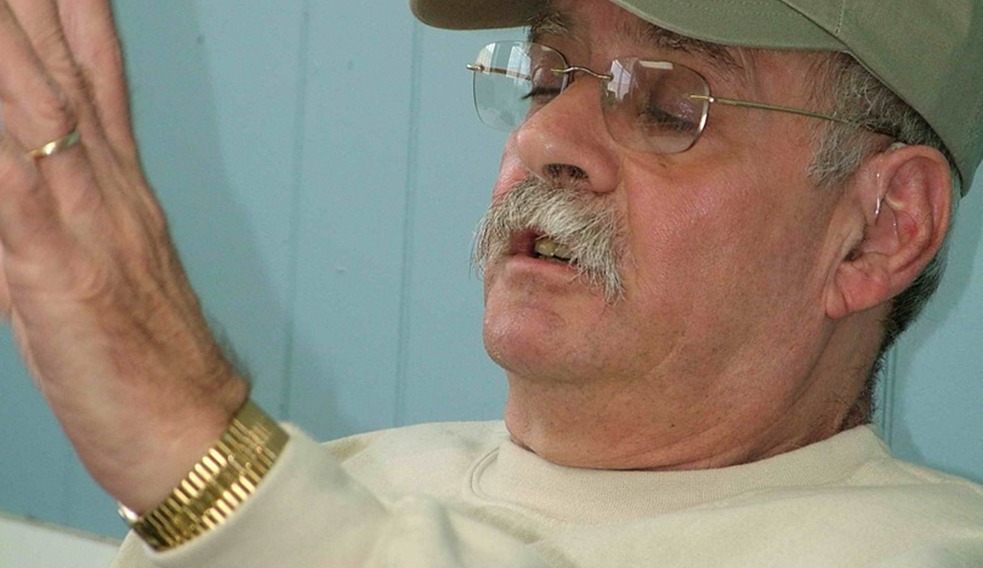