Thanks to all for a great meeting!  Good to have the Master Modeler back!  See ya the March Work Session! 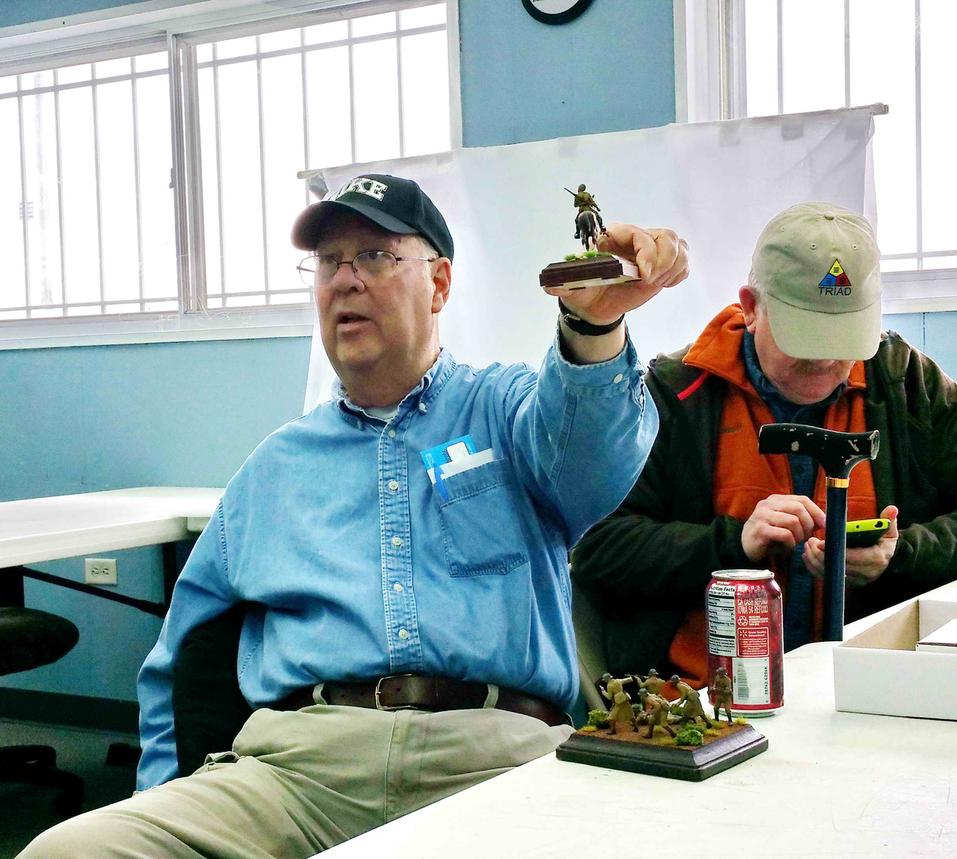 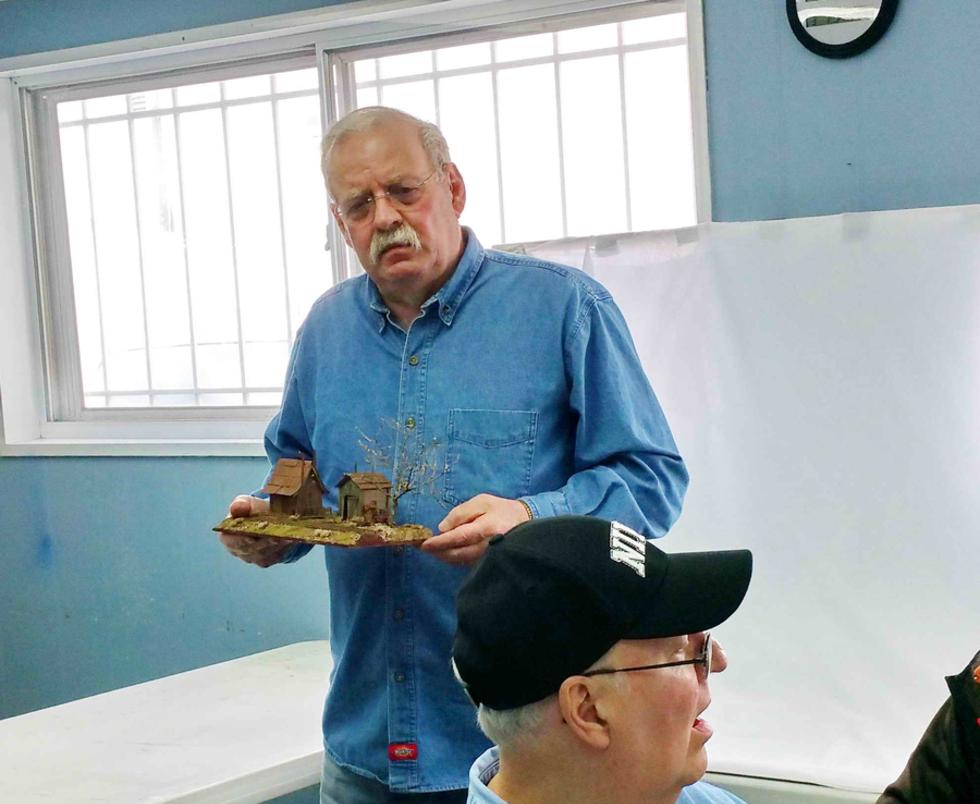 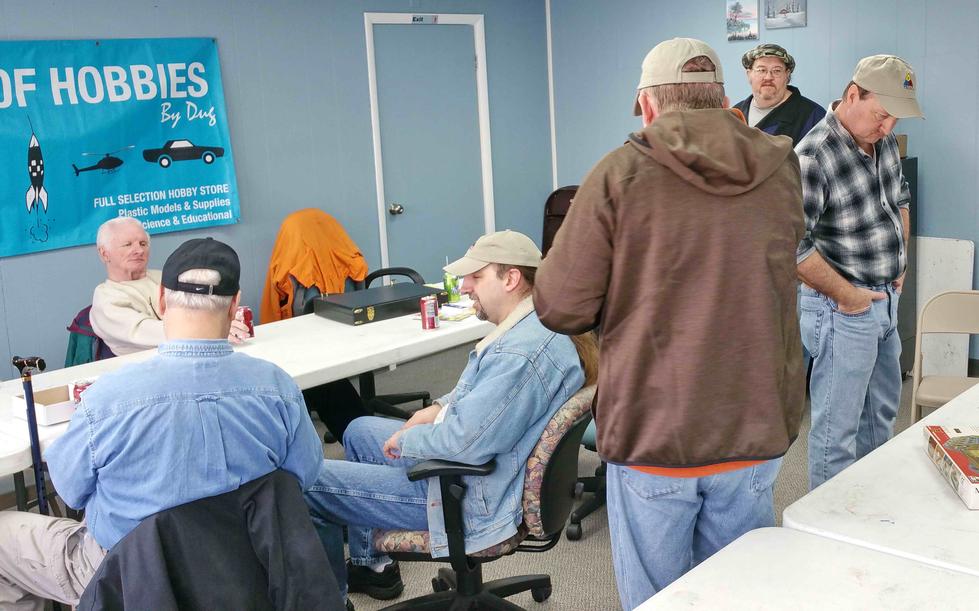 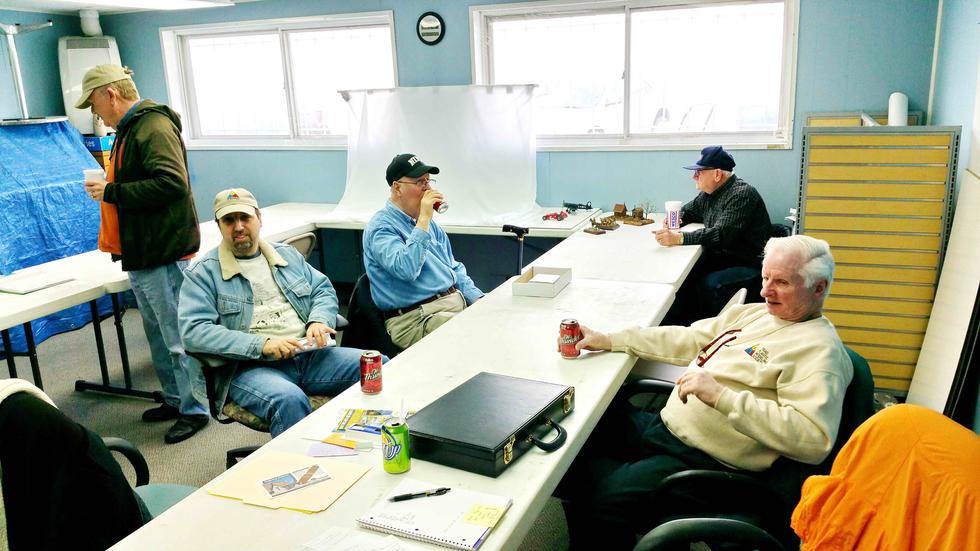 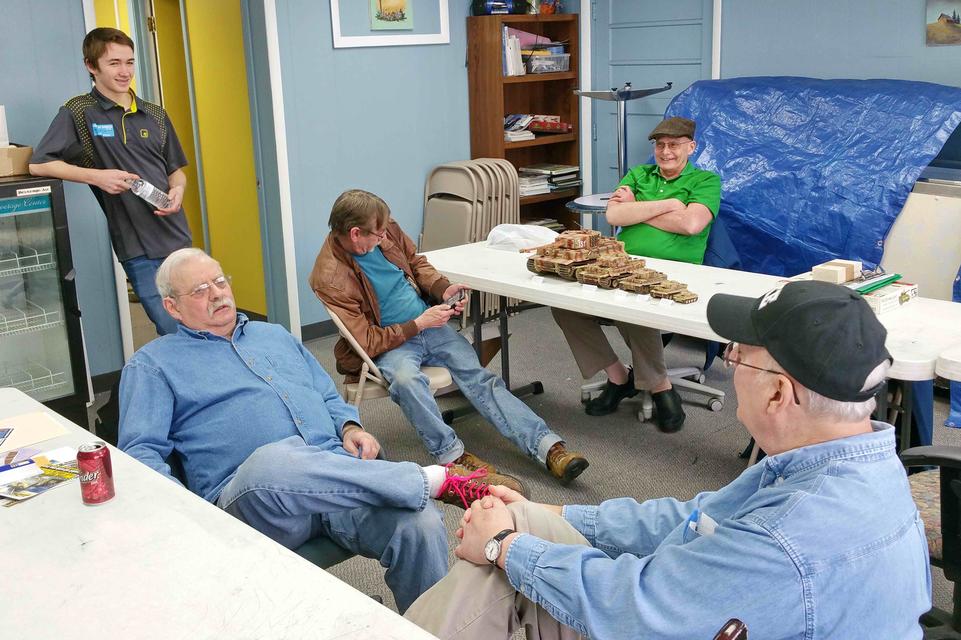 It’s time for some general shots of the guys having fun.  It really was a fun meeting.  Being able to give Al a hard time made it all the more special!  ;-) 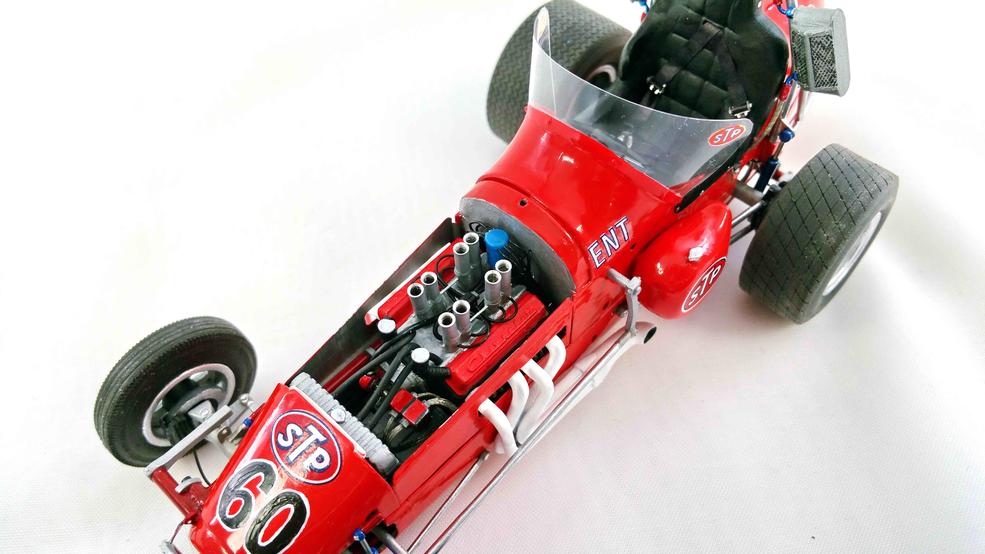 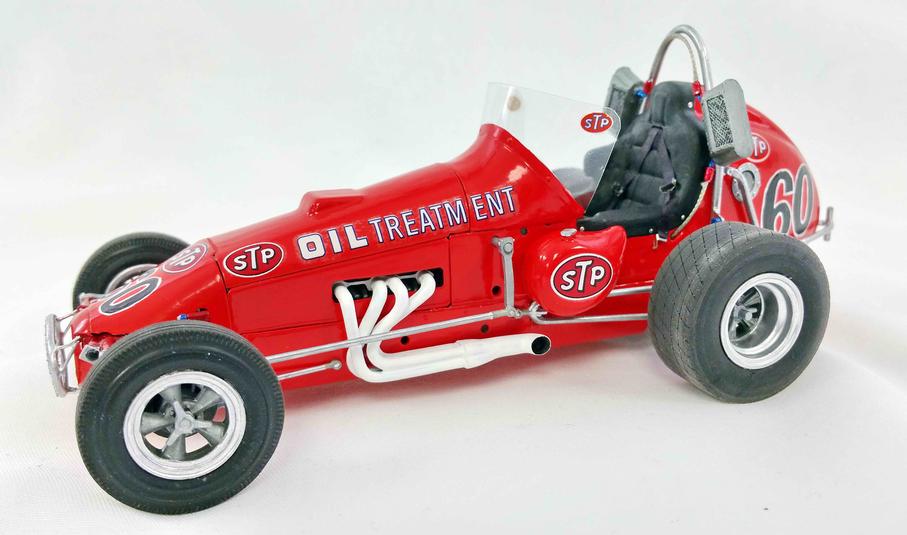 Here we go again.  JR’s 1971 USAC Silver Crown Sprint car generated a ton of oohs and aahs along with a few drools.  How does he do this?  He started with an old Monogram 1/20 midget kit and extensively reworked the entire model to make it 1/25 scale.  Good grief.  He used lots of spare parts, custom made the nose and hood from offset printer’s aluminum.  He also scratchbuilt the oil coolers and suspension.  He detailed the Chevy small block engine.  Don’t miss the left rear tire…he cut the treads himself.  Just incredible.  Amazing. 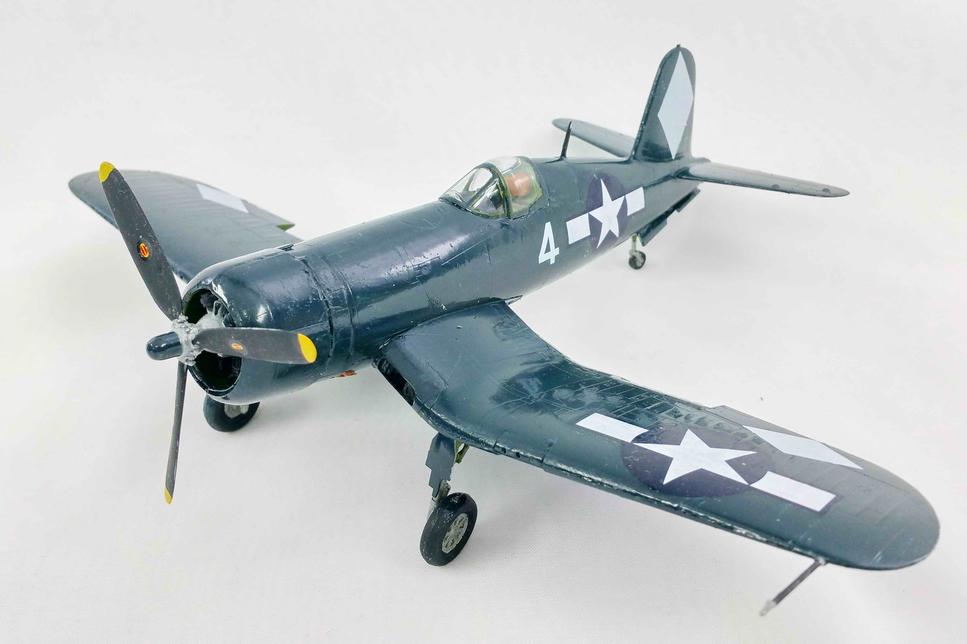 Mr. Feller Dewitt, get ready for this, brought in his 42nd Corsair model…this one a F4U-1D.  And I think he said he had four more kits at home!  Feller used Aero Master and kit decals.  He says that the dark sea blue paint hides lots of modeling boo boos.  I guess it does because we didn’t see any!  Nice job, Feller! 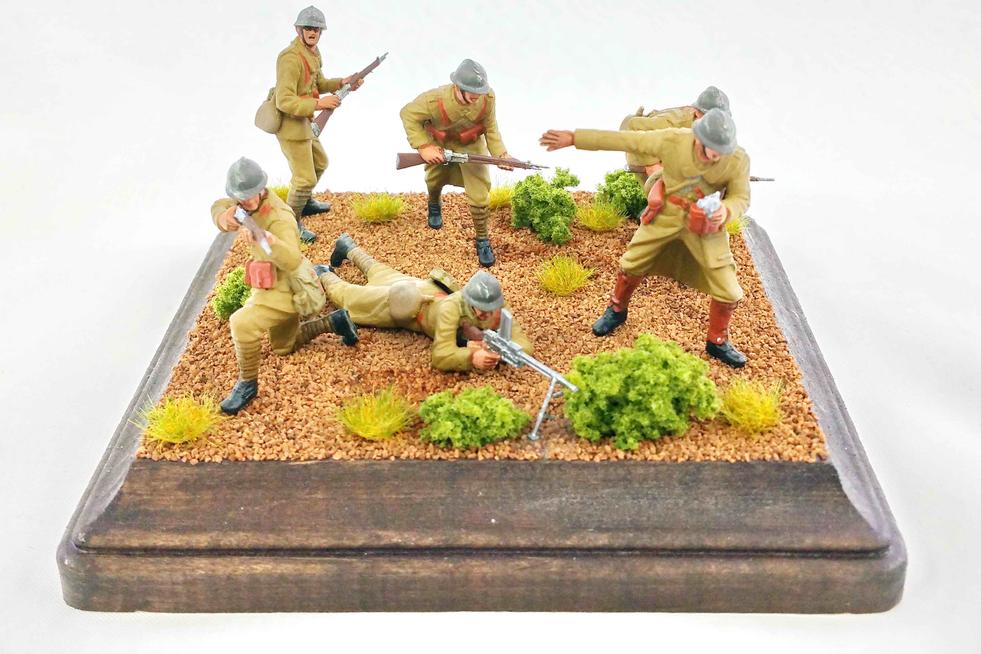 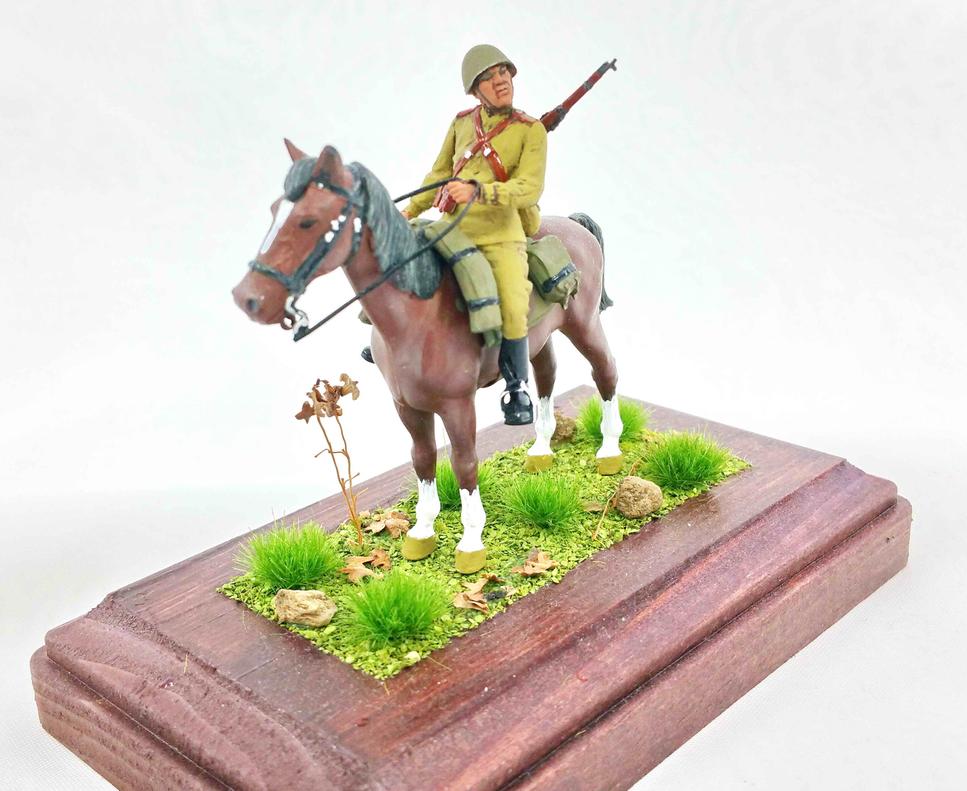 Figure Guru Bob Thompson brought in two vignettes.  The first one is a WWII Russian Cavalry figure from ICM and horse from Tamiya.  Bob painted both with Vallejo paints.  Everyone asked “where were the road apples”…?  The second vignette shows six Tamiya French WWII figures, also painted with Vallejo, in a full charge.  Ya done good, Bob!  We were all favorably impressed! 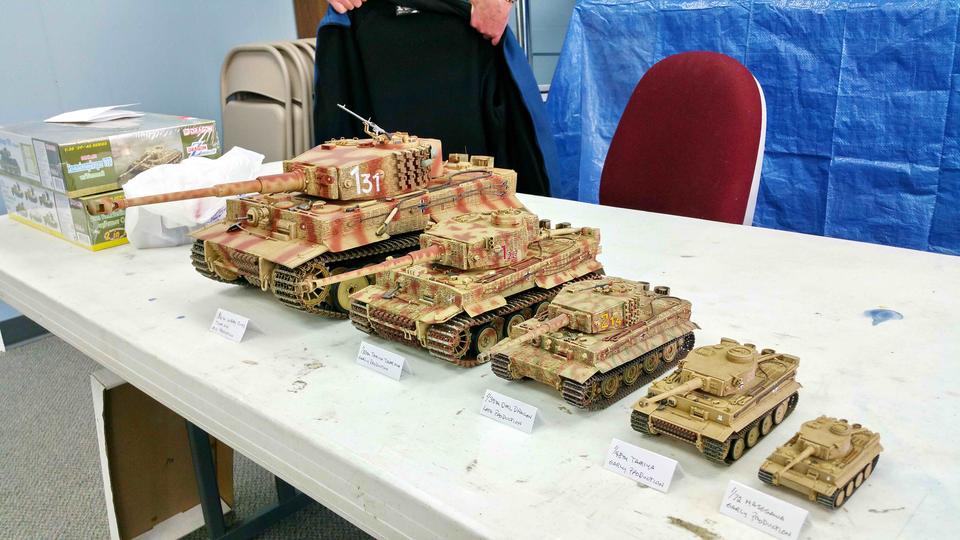 He’s called “Master Modeler” for a reason.  He’s also called “Mad Max”!  Dan Jayne was in a Tiger I mood and brought in five models in five different scales.  Starting on the right, we have the 1/72 Hasegawa early production and then the 1/48 Tamiya which Dan said was a beautiful kit.  It has individual track links.  This is also an early production.  The 1/35 model is a DML kit of a late production Tiger I.  Dan did a lot of extras…tow cables, Zimmerit, jack block, etc..  The 1/25 early production model was built from a Tamiya kit with lots of extra goodies.  The elephant in the room is a 1/16 mid production Tiger I and was built from the Hobby Boss kit.  Dan wasn’t crazy about the kit as it needed a lot of extra work to make it look right…like real metal side shields.  He also had to completely modify the turret mount.  Now, if he could just get his hands on that Tiger I in the movie "Fury"! 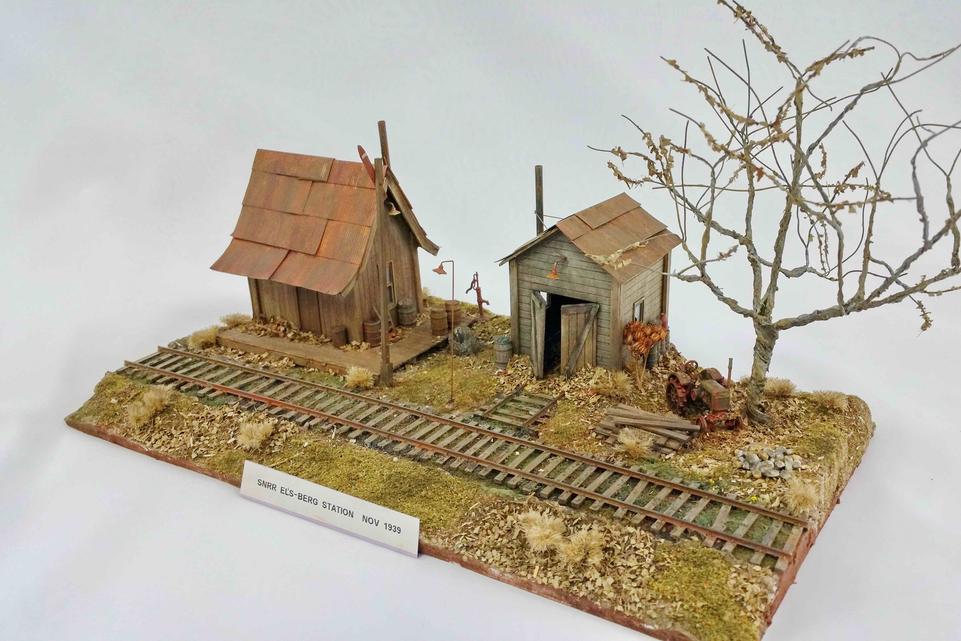 Al George and I are so much alike…I’m good looking and he wants to be.  While he’s working on that issue, let’s take a look at something that is definitely good looking…his latest HO 1/87 vignette.  These structures are on the SNRR (Somewhere and Nowhere RR).  Just about everything you see was scratchbuilt except the castings, the tractor, and the rail.  Even the tree is handmade.  Note the great rust job on the roofs.  The two buildings were made from Midwest lumber.  Track is Atlas code 55…which I love, because it looks so prototypical.  Sit back and enjoy the view…great job, Albert!