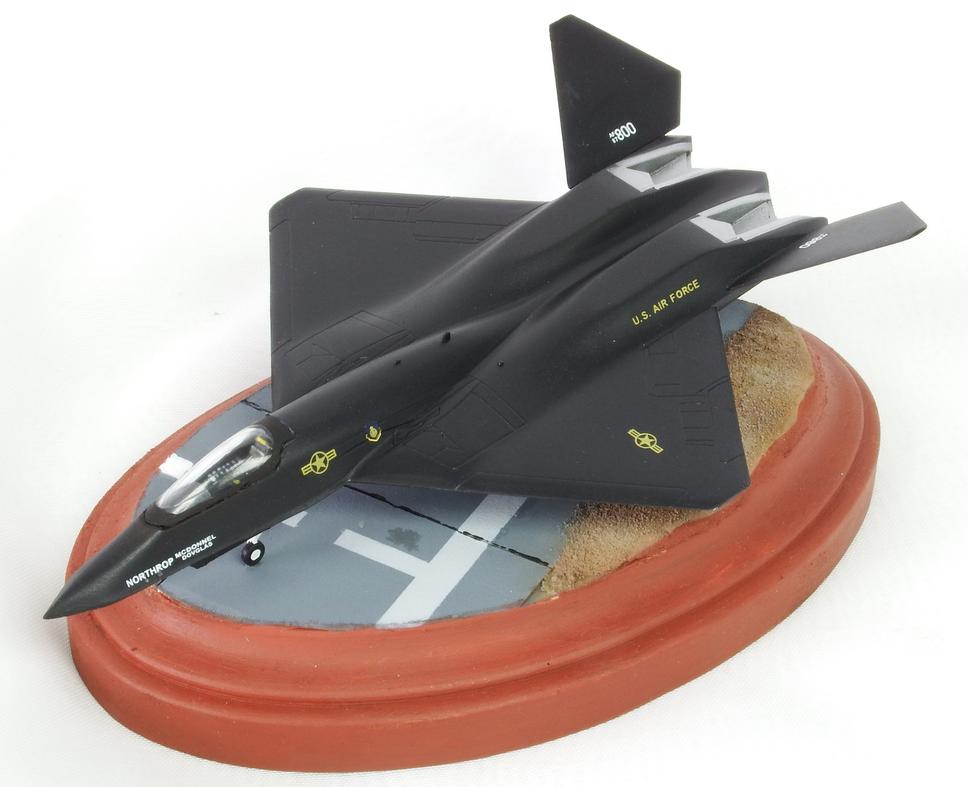 Let’s kick things off with a modeler who is known worldwide for his P-51 models. I can say that because modelers from around the world look at our site!  I’m talking about Feller Dewitt who brought in his Tamiya 1/48 P-51B.  As per his SOP, it was hand painted with Model Master paint and decaled with Aeromaster decals.  It’s a beauty, Feller!

Award winning Keith Lemke brought in his ’37 Chevy Coupe.  He says there are not many Chevy street rod kits...but this is one of them.  It is an AMT kit and is used in his garage diorama.  He painted the figures (awesome!) and are also for his garage.  And here is Deb’s B-17…so good it had to be on the homepage!  This was a Meng kit.  And thanks for the candy, Deb…except Keith made me share…..  Bummer. 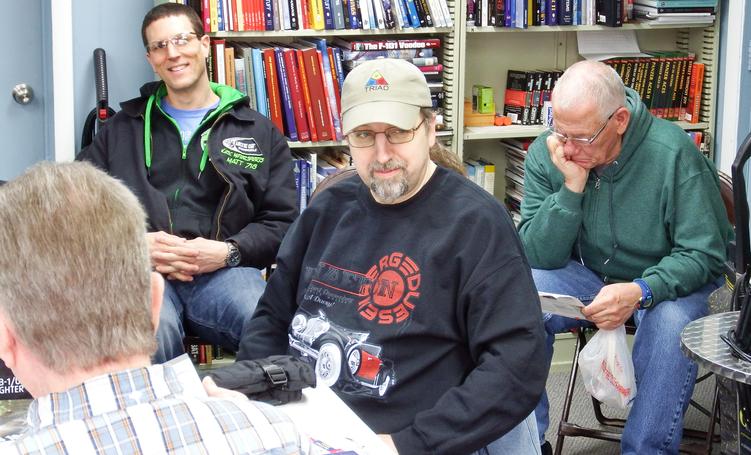 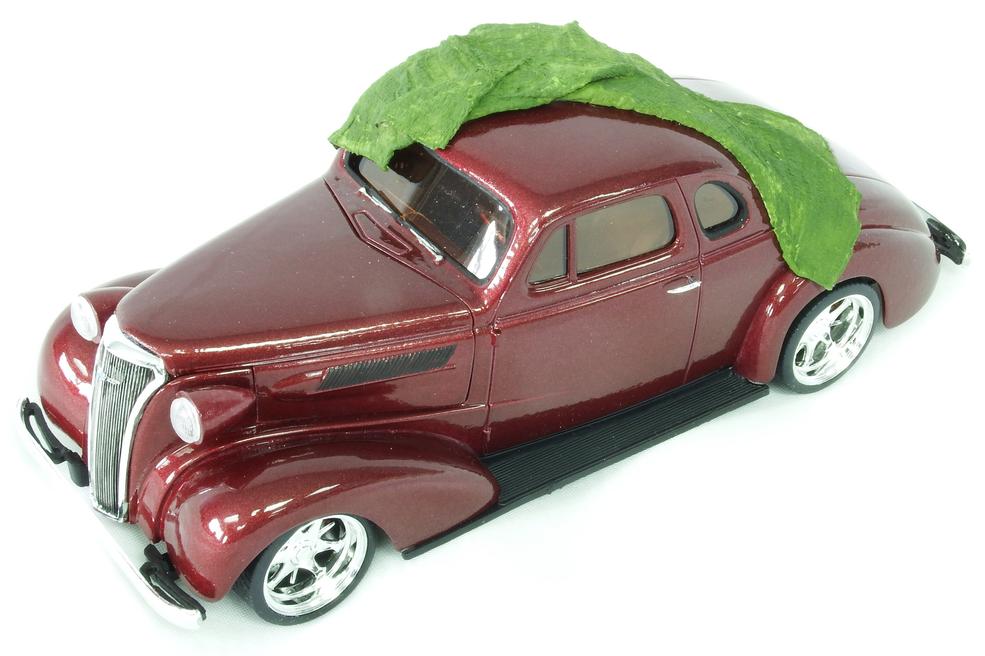 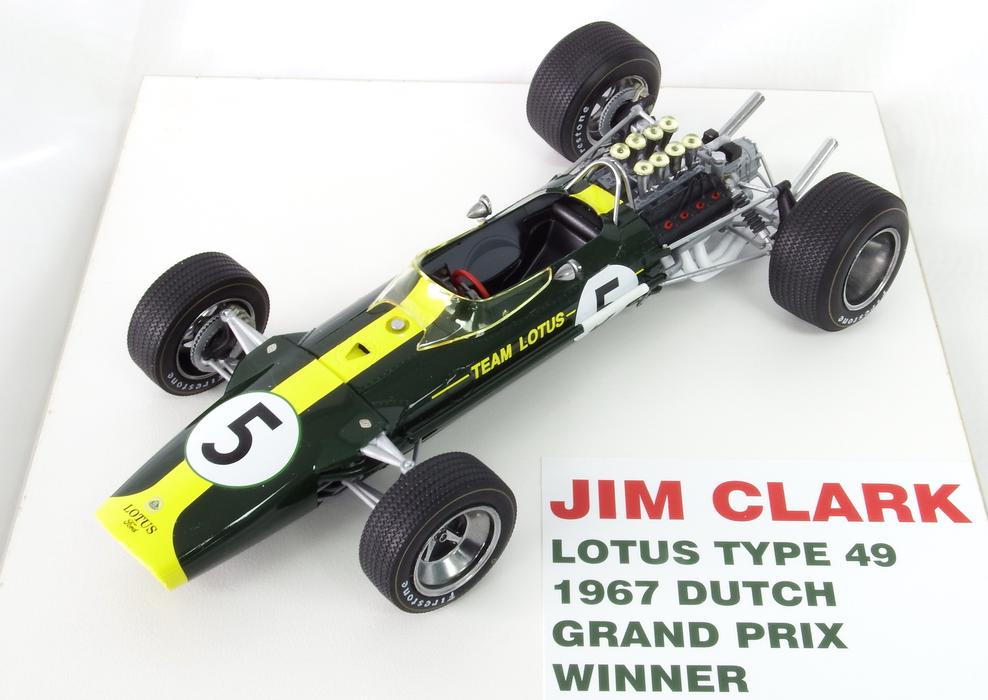 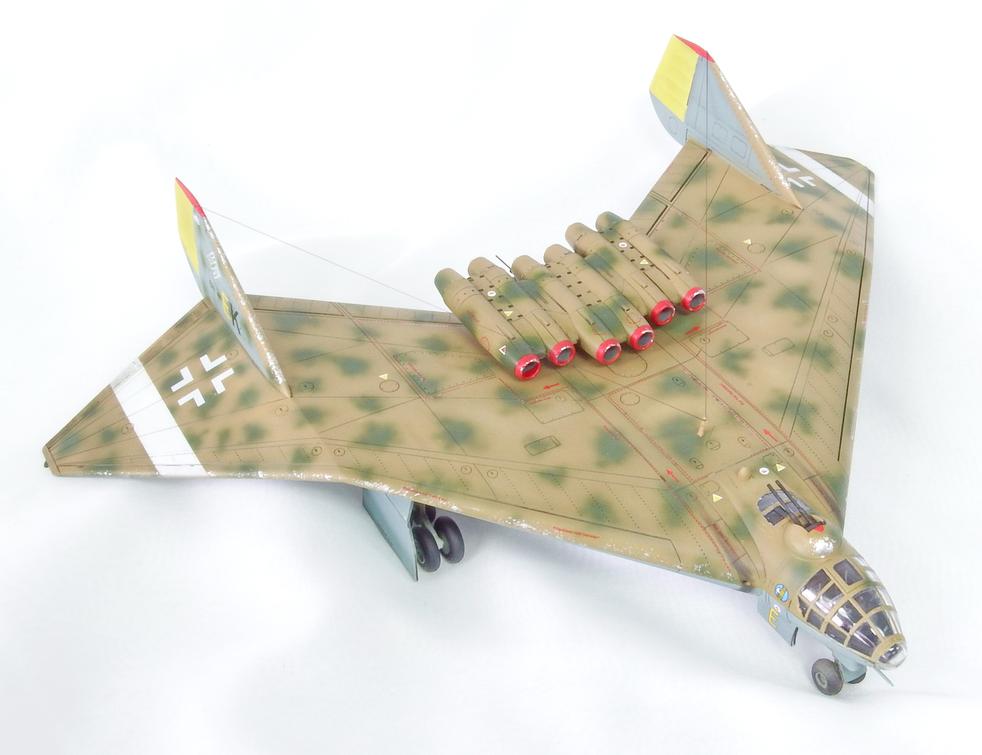 Here are a few pictures of the sardines.  Great to have Judy Jayne join us again!  See ya at the April WS.  Don’t forget your 5 tips or tools. 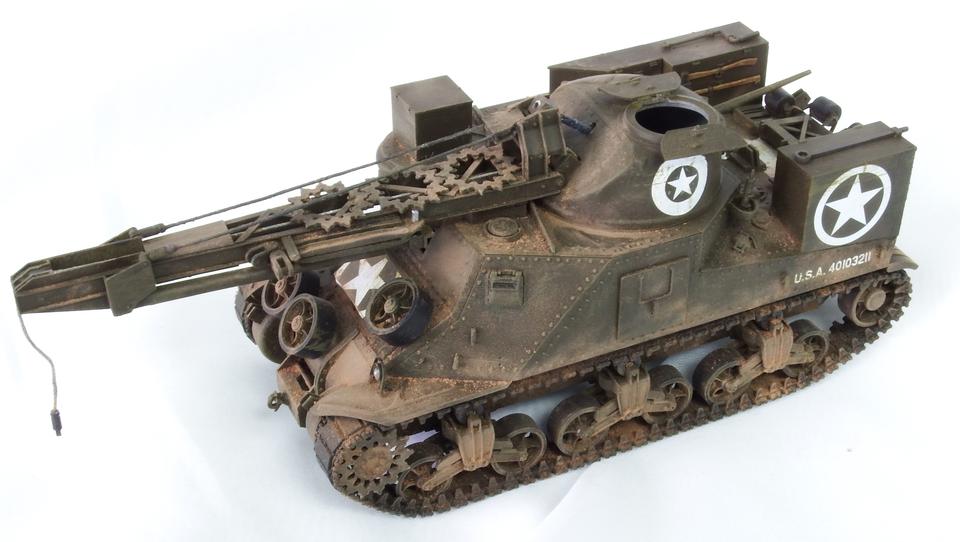 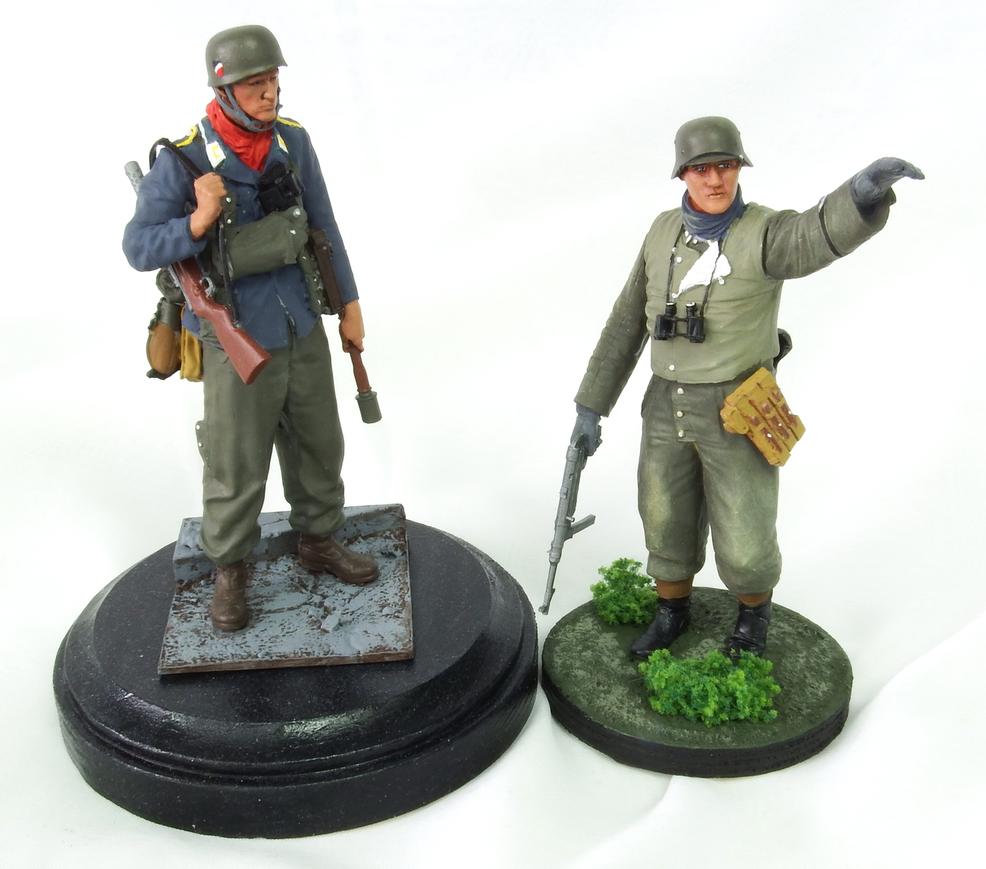 Skill level 1.55 brought in his first 1/20 Ebbro model which is the Lotus Type 49 which first raced in the 1967 Dutch Grand Prix which was won by Jim Clark.  Yes, the windscreen was actually that color!

Big Daddy Bridenstein has completed his M31 tank recovery vehicle and as you can see it is modeling perfection.  He said it was a complicated and delicate kit but goes together well.  (Not recommended for skill level 1.55 types)  He used Tamiya paint and pastel weathering.  Awesome, Jerry! 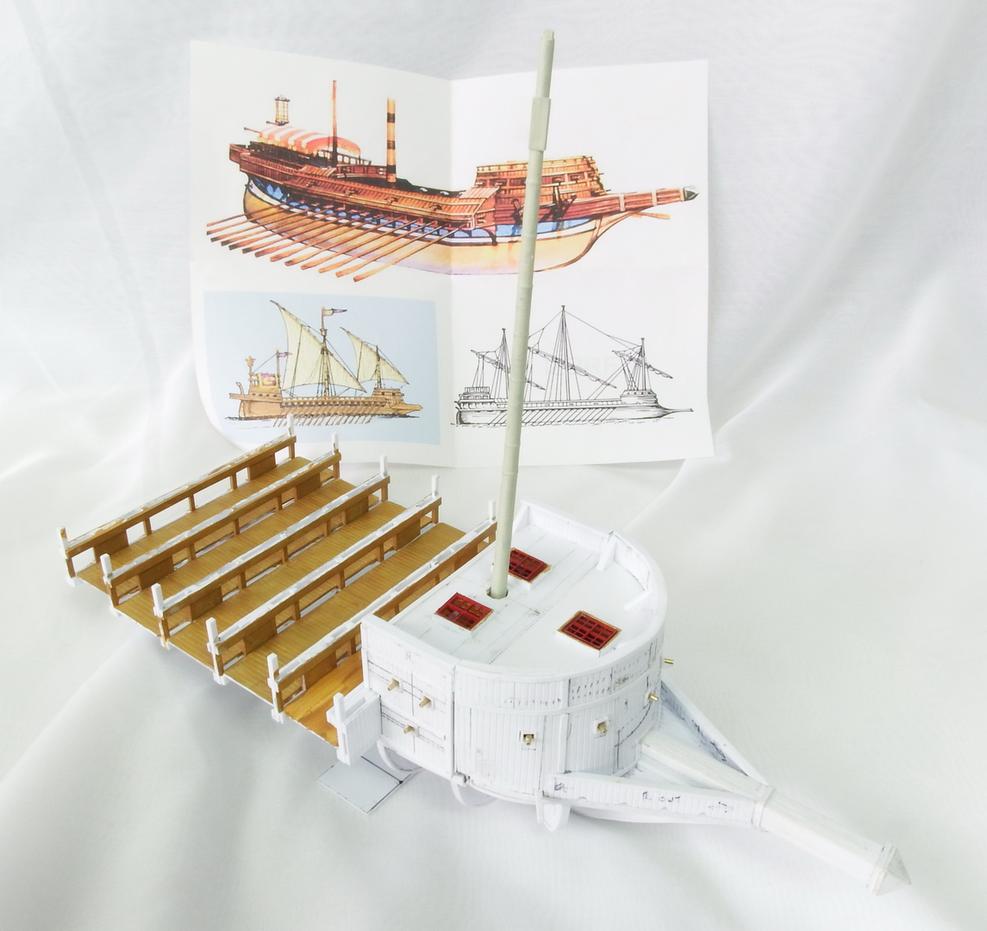 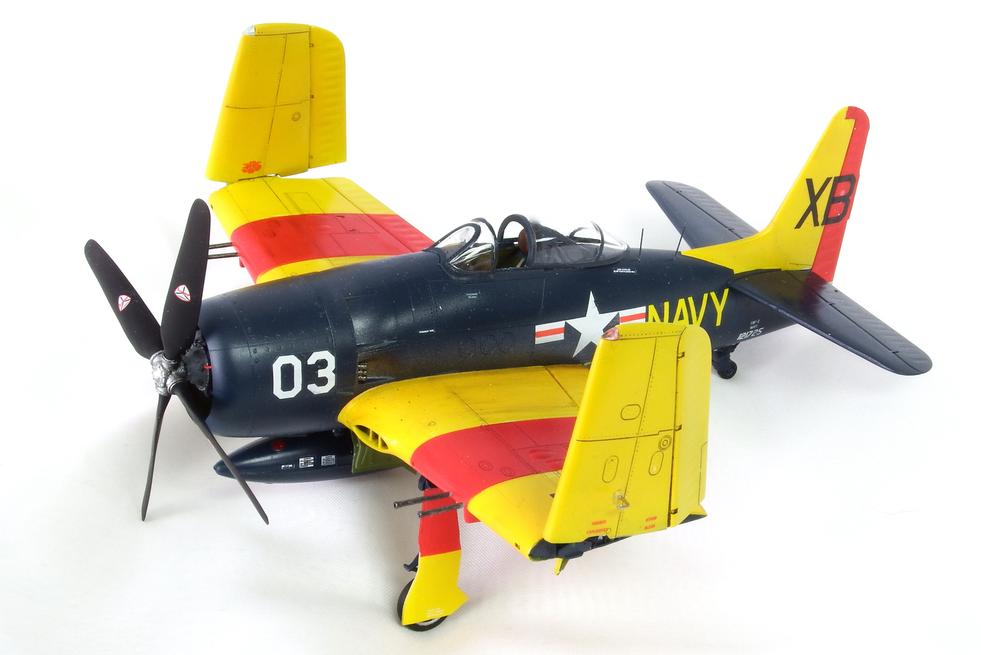 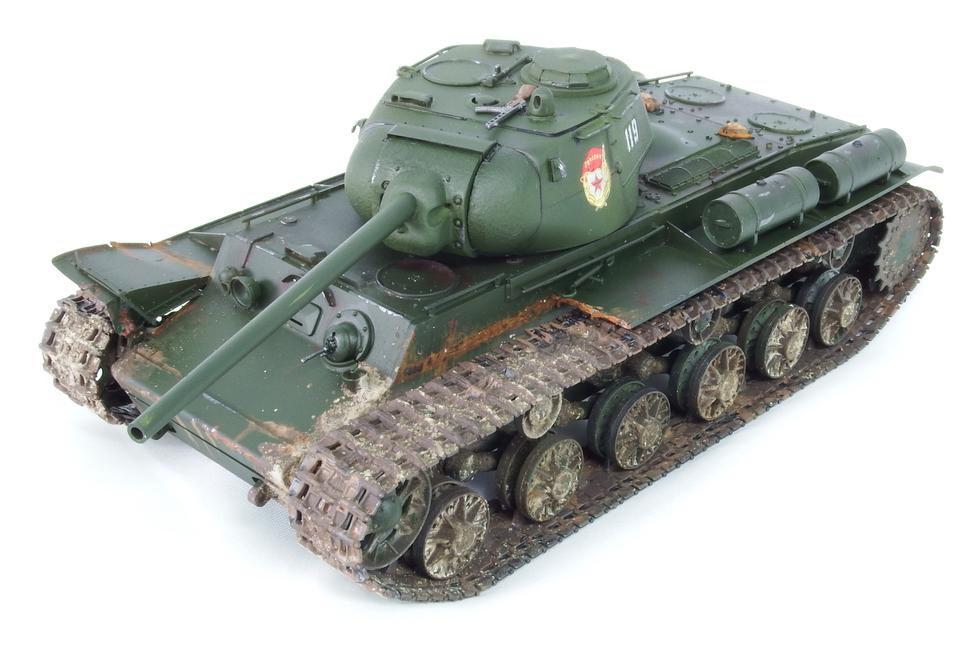 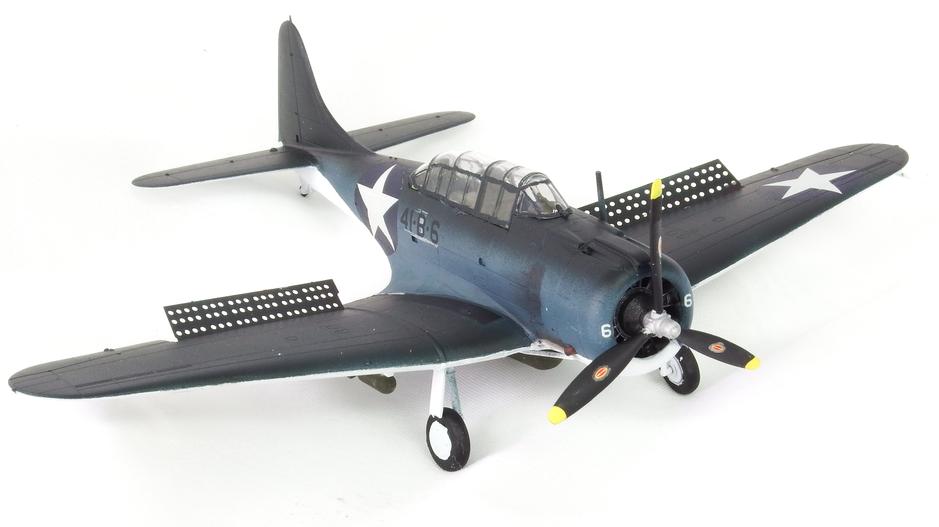 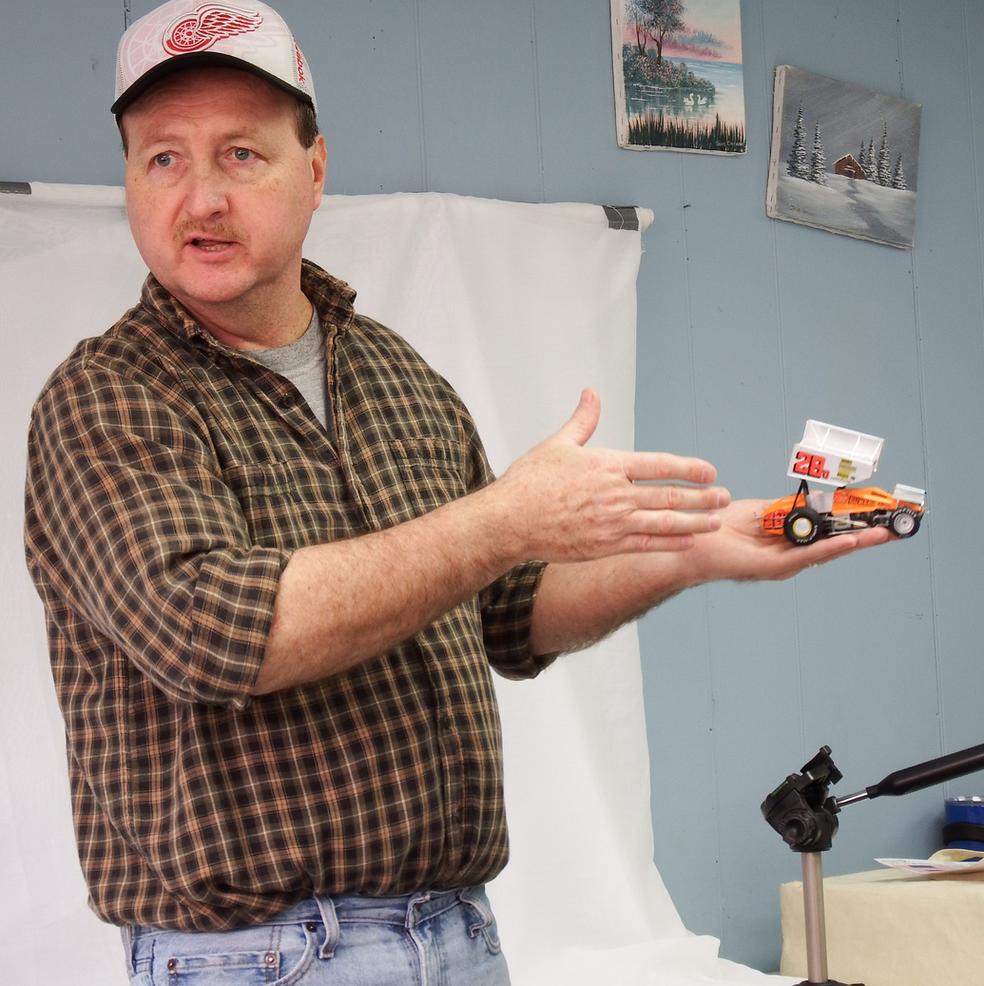 Alan Vandam proudly showed off his Hobby Boss Snap-Tite F8F-2 Bearcat.  Alan didn’t care for the kit as it just wasn’t challenging.  Or maybe I have this completely backward!  As Alan wrote, “Kit is off in every dimension!”  And don’t even get him started about the yellow paint!!!  ;-)  Well, you couldn’t tell by the finished product.
The weird looking sub is a 1/35 kit from Miko Mir.  It is a Hase which is German for shark.  Only one of these suicide subs was made.  This kit was also horrible.  We wish Alan better luck with the quality of his next kit!  ;-)

Old man Bob Thompson is creating some awesome models and figures!  Here is his Tamiya M48A3 Patton tank.  Don’t tell anybody, but he just Dullcoated the OD plastic.  Who would know the difference?  This is the Marine version of the tank.  Then we have two 1/16 resin German figures.  Wow…are they impressive!  The guy in blue is a paratrooper and the other is an engineer.  Fantastic, Bob! 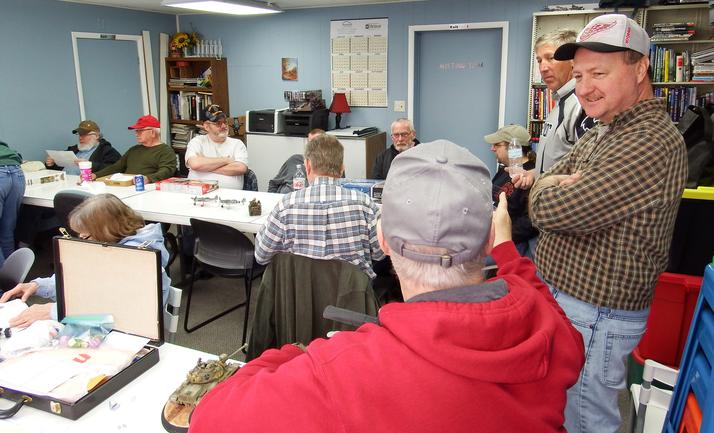 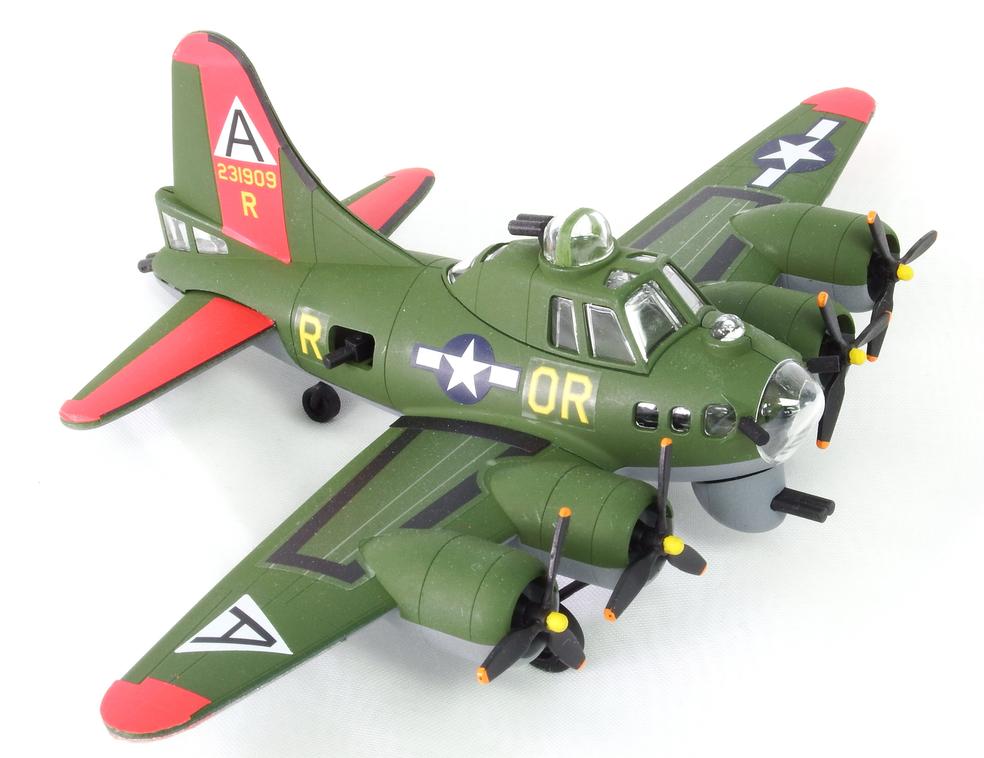 The President, JR Burggren, was showing off again.  He flouts his superiority at every opportunity.  Hey, if I was this good, I would too!  ;-)
This his Mongram model of Brad Doty’s 1982 World of Outlaw Sprint Car.  He says it is pretty much a stock build except for added bracing to the wing and hand painted numbers and sponsors.  All I can say is wow! 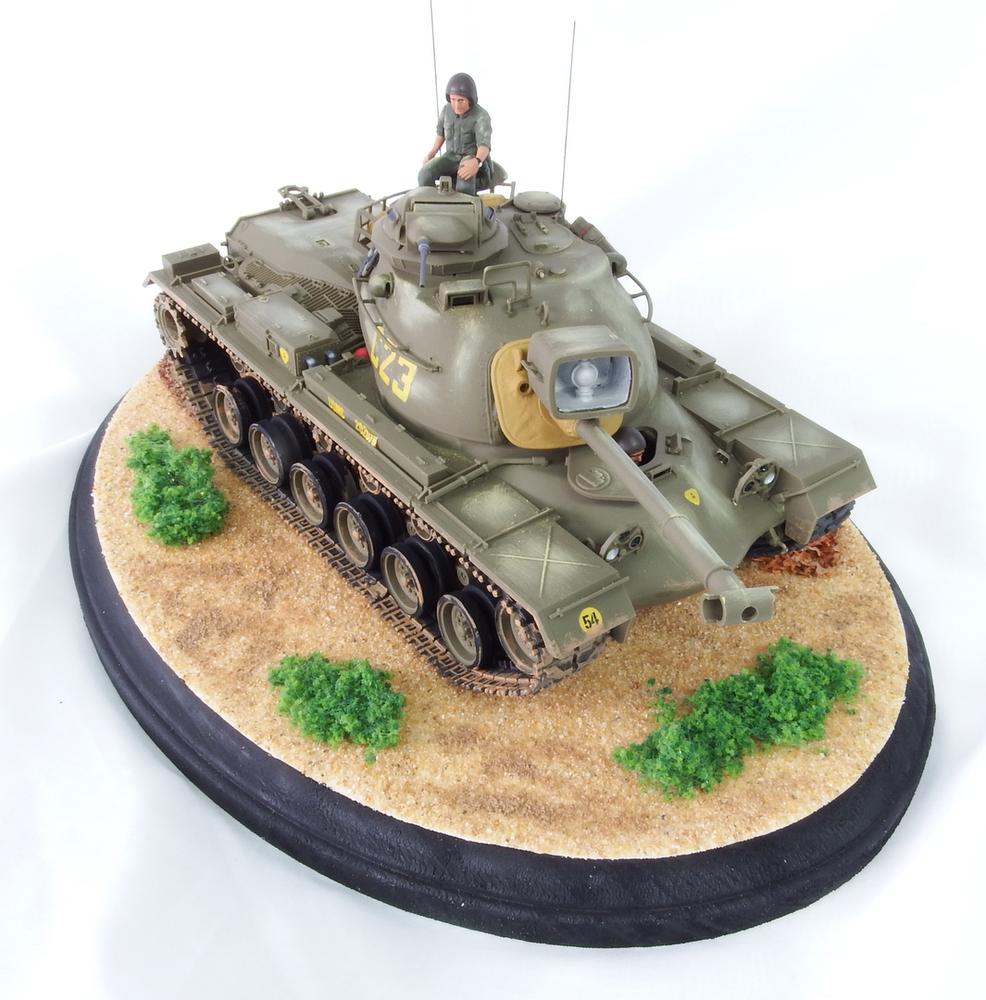 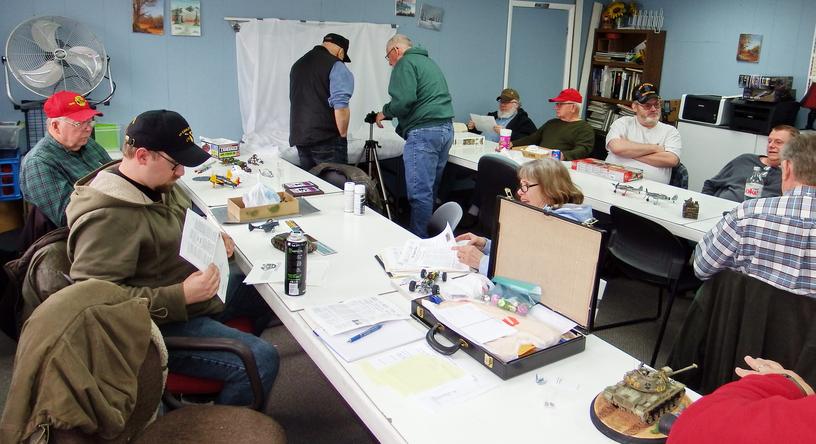 Prof. Bill Leger is making tremendous progress on his Venetian War Galley circa 1570 as it would have appeared at the Battle of Lepanto.  Everything you see is scratchbuilt from Evergreen Styrene.  Bill has been named customer of the year by Evergreen.  Way cool, Bill!  Just amazing! For Doug Seekman, it was a FW-190 day.  The aircraft on the left is a D-11 model painted with Model Master paints and kit decals.  I wish I had a photo of the underside as it was painted so German gun crews would not mistake it for Allied aircraft.  Never seen that before.  Cool.  I think these planes were used to protect the Me-262’s when they returned to the airfield.

The other model is the D-9 also painted with Model Master paints but with Kommandeur decals.  Both models were built around 2009. 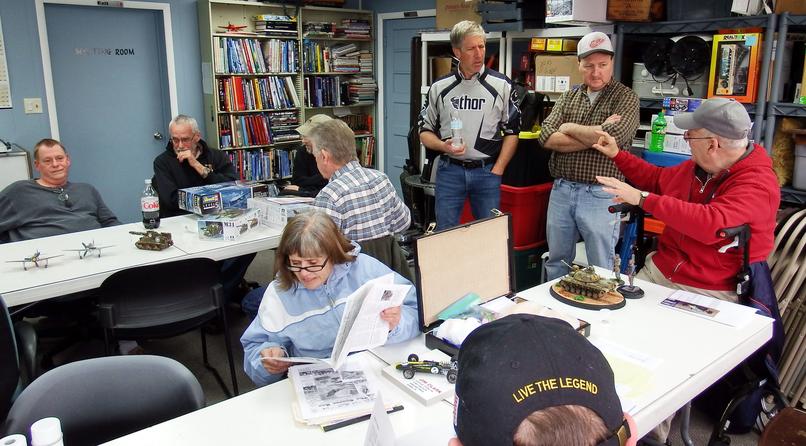 Young Spencer Kosc strolled in to show us how much better he is with an airbrush the rest of us.  I wanted to smack him but his Dad was there….  Check out this Revell 1/72 Arado Ar.(E) 555.  He used Vallejo Model Air RLM paint.  Decals were from the kit except the swastikas.  The YF-23 Black Widow II was a Trumpeter 1/144 kit.  This was built out of the box.  He had to glue the plane to the base as there was no space in the nose for weights.  Love ‘em, Spencer!  Come back again soon…without your Father…I owe you a slap up against the head!

Stan the Man Carrier displayed for our enjoyment his 1/72 SBD-4 Dauntless from Hasegawa.  He did a great job with the PE dive brakes. He used Tamiya paint shot through his Pasche H airbrush.  The next model is the 1/35 Trumpeter kit of the Soviet KV-85 tank.  Once again, Stan did a great job showing battle damage and he weathered with Tamiya and AK Interactive products.  The kit was one track link short…doesn’t that just tick you off!  Great job, Stan!