See ya at the December work session.  Maybe we could have a do-over on the election!  PLEASE!! 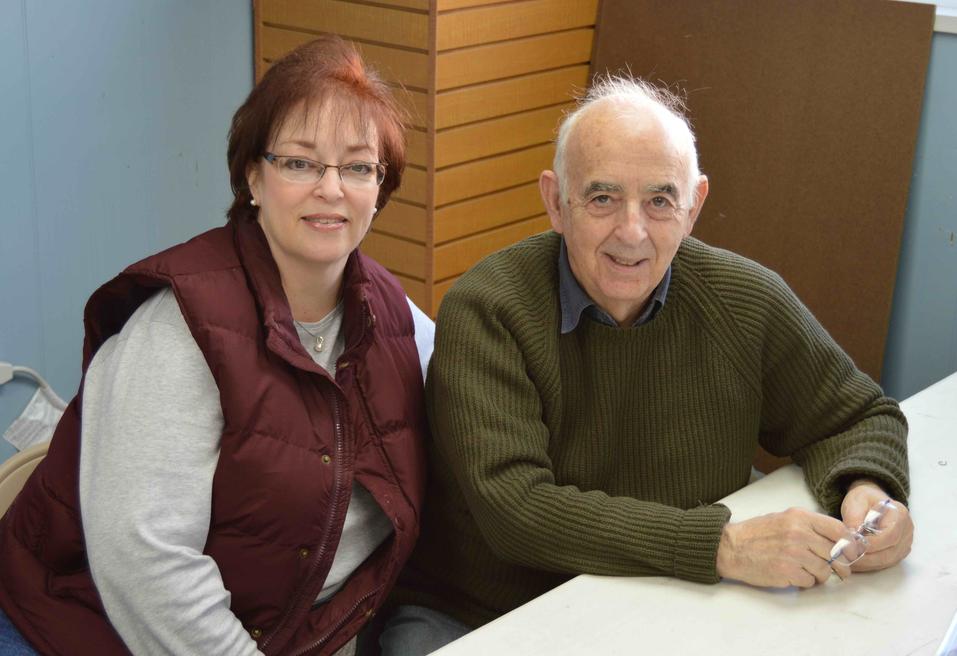 Again, here is my favorite photo.  And I just loved it when Maria called Francisco, "Daddy".  Good stuff! 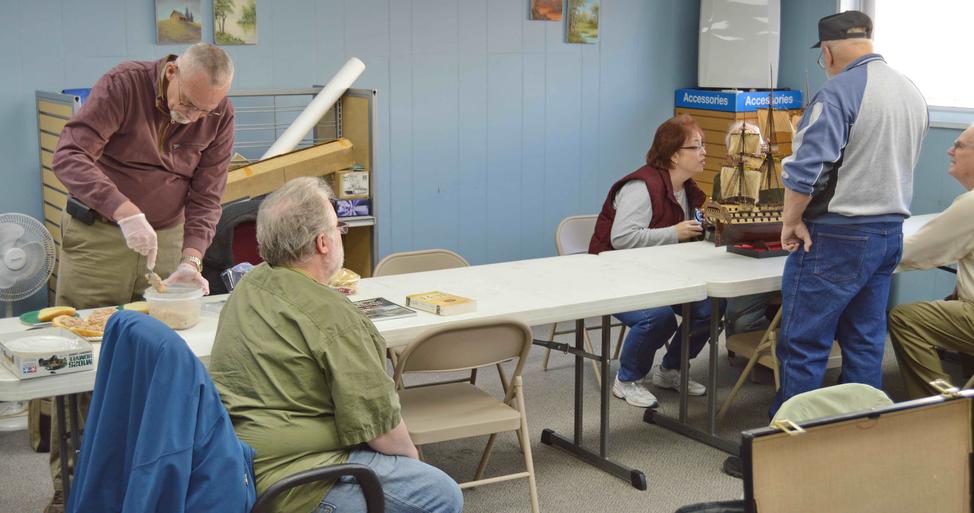 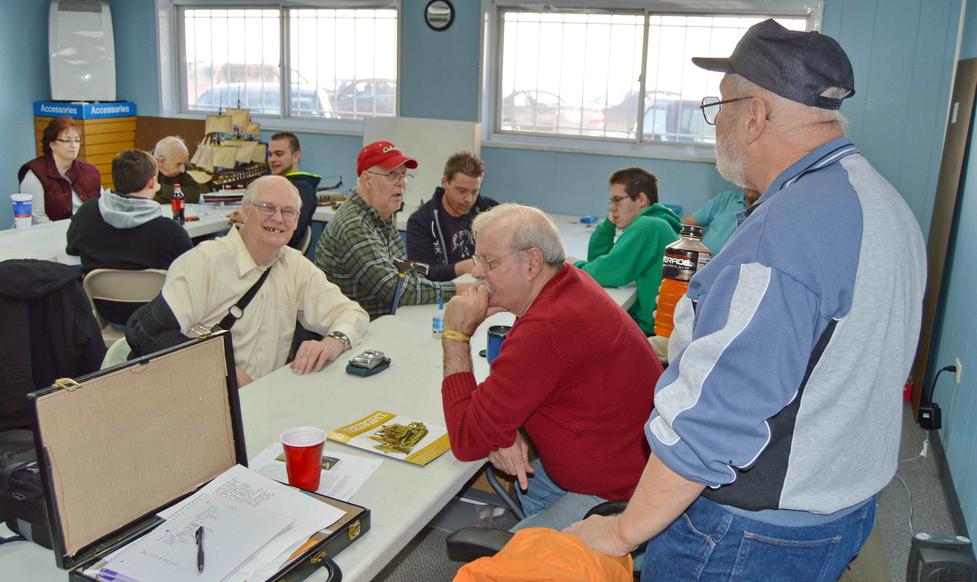 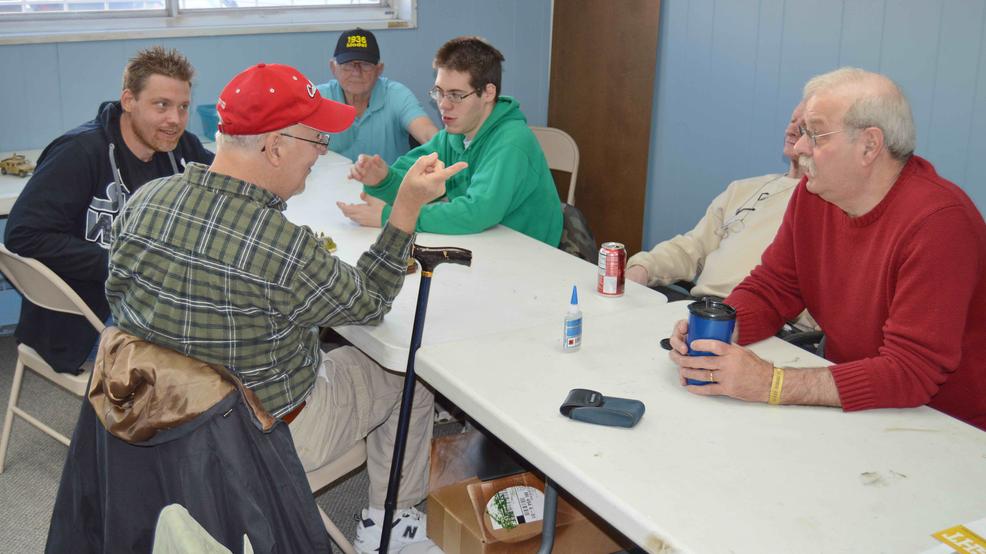 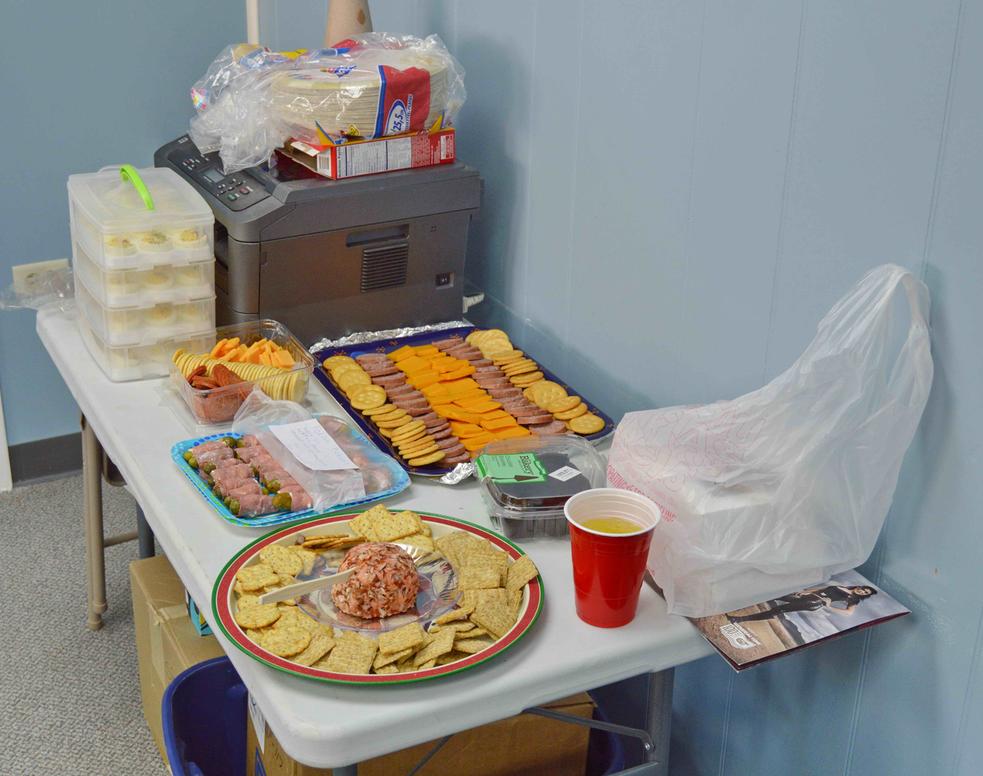 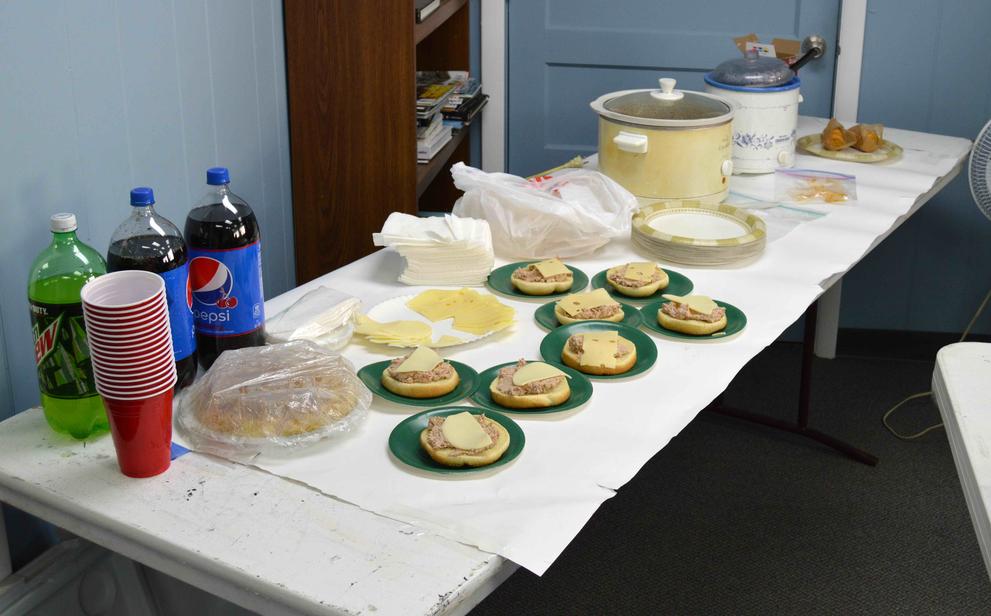 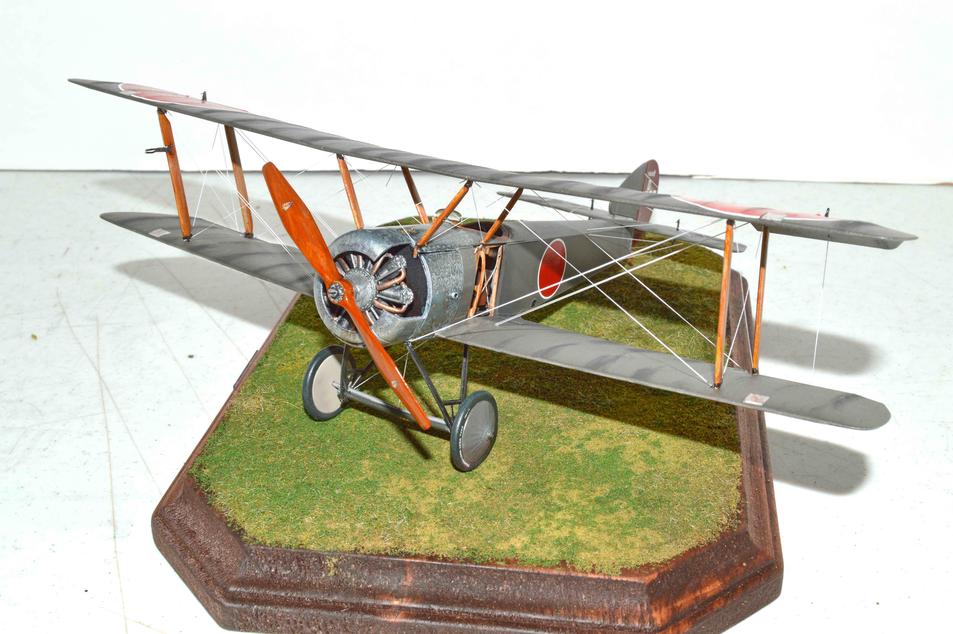 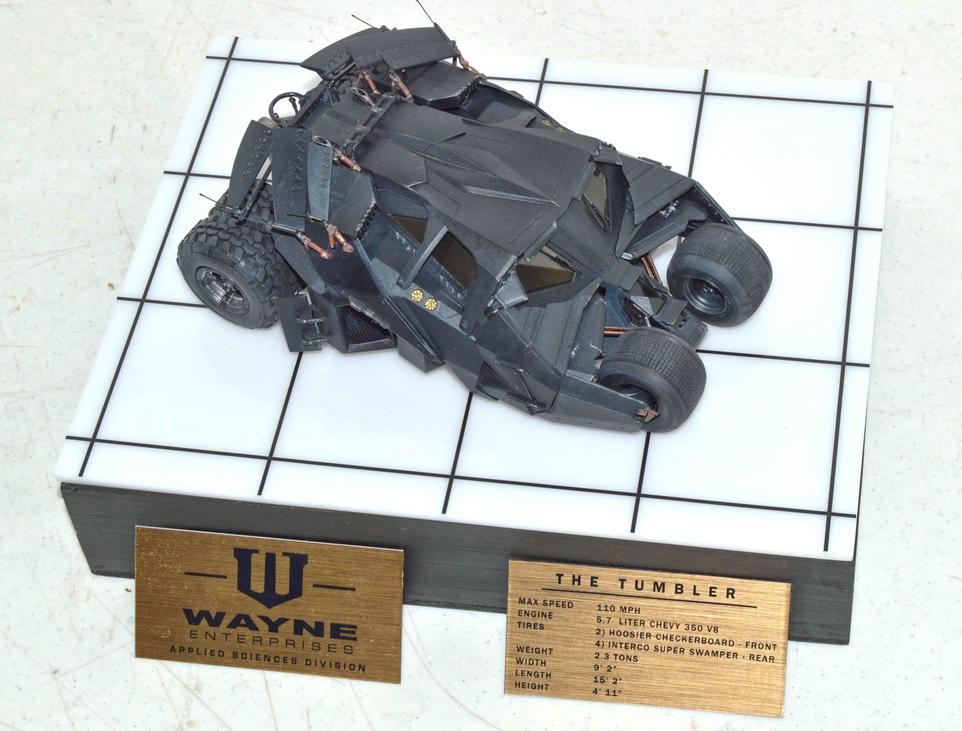 Rob Sheffer showed up with two great looking models and his Batmobile took a first at this year’s K-Zoo contest. And a man after my own heart, he built a 1/32 Wing Nut Wings Sopwith Pup. He used EZ Line for the rigging but told us it was exasperating and he’s had enough of WWI biplane rigging! Been there, done that! Great job, Rob, and we hope your daughter is feeling better very soon.

Doug Schuur presented his 1/48 T-38 Talon all dressed in black as it appeared in its training role. Looks very spiffy! Thanks, Doug!

Danny Sutton has reappeared spreading holiday cheer…and showing off his really sweet 1/600 Revell SS America. The ship was launched in 1939-1940 and served as a troop ship during WWII. Danny added LED lights and they look awesome. By the time I wanted to take a photo with the lights on, we didn’t have any working cameras!  Great job, Danny! 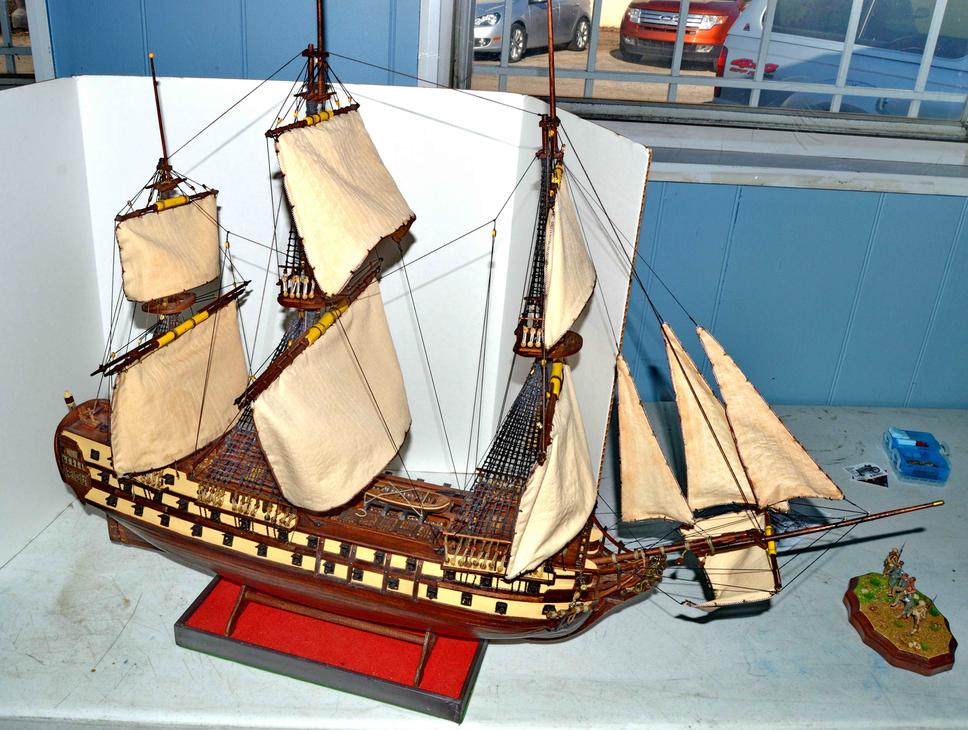 Francisco Alvarez (AKA Alfredo) was there with his nearly complete Spanish Man-Of-War from around 1705. It has taken one year to build…so far. Each deck cannon is made from 17 parts!  But the best part of his show & tell was his daughter, Maria. She sewed the beautiful sails. And what a charmer!  And quick, too!  When she saw the electric wires exiting Sutton’s ship model she said it was a hybrid!  Funny!  Francisco…we’ll trade you Bob if we can have Maria!  Heck, I’ll throw in JR, too!  Be sure and see their photo on the home page and at the end of the report. 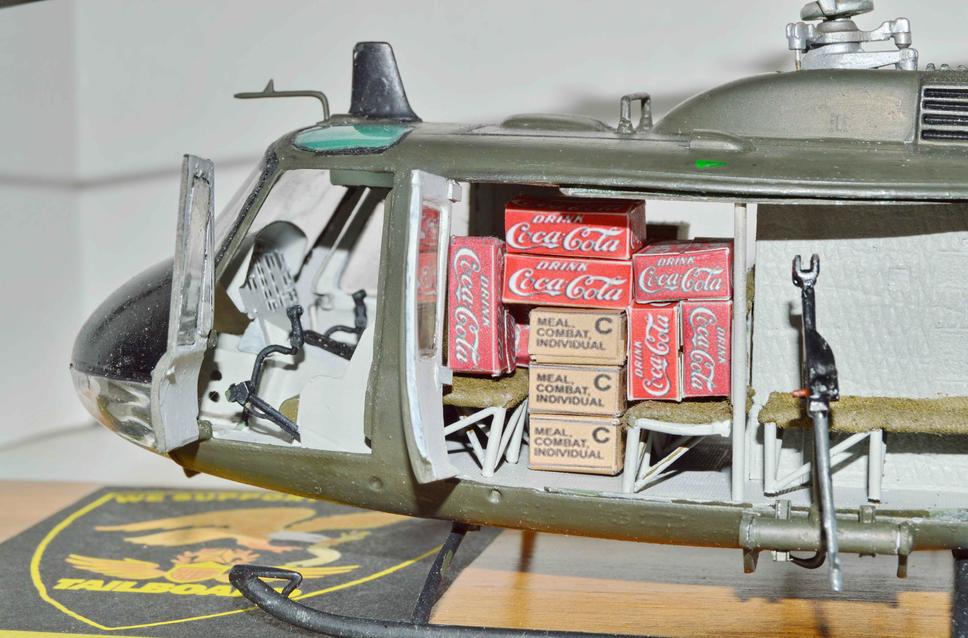 Prof. Bill Leger brought in another gorgeous helicopter…this one a Huey. This was a Revell kit and Bill added a lot of goodies (see second close-up photo) and modifications. Unfortunately, I was eating cookies at the time and missed some of this…hey, I was hungry! ;-) Check this baby out! 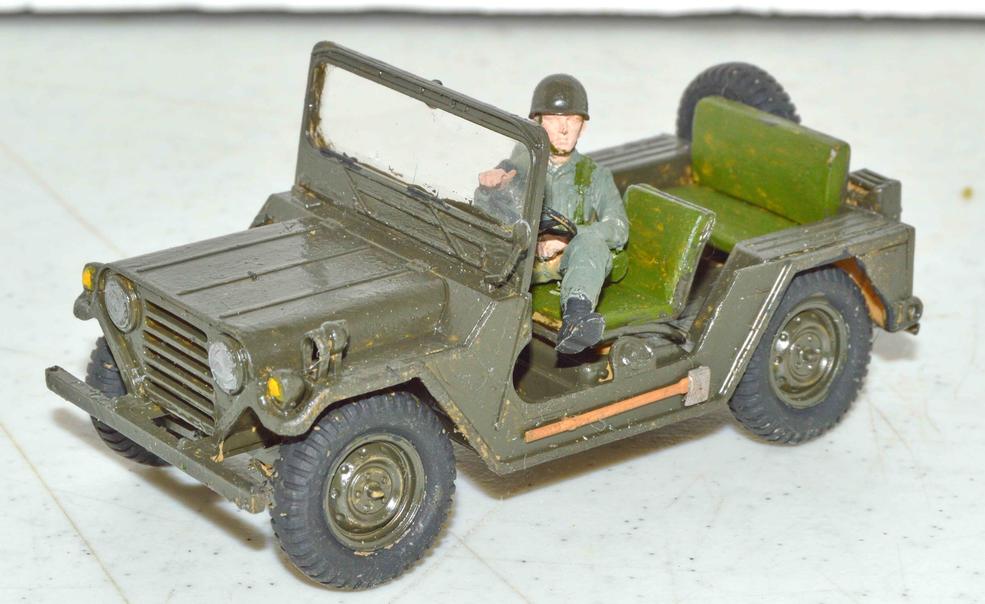 Mark Seng and his nephew Joey Powers showed off their models. Mark had one of his trademark miniature dioramas. This one depicted WWII figures by Italeri and a Pegasus Pershing tank. Joey brought in his sharp looking circa 1962 Mutt type Jeep. Great job, guys! 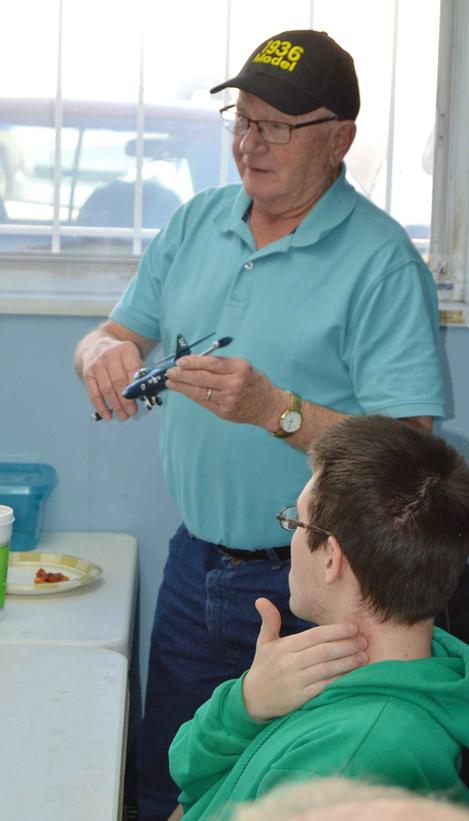 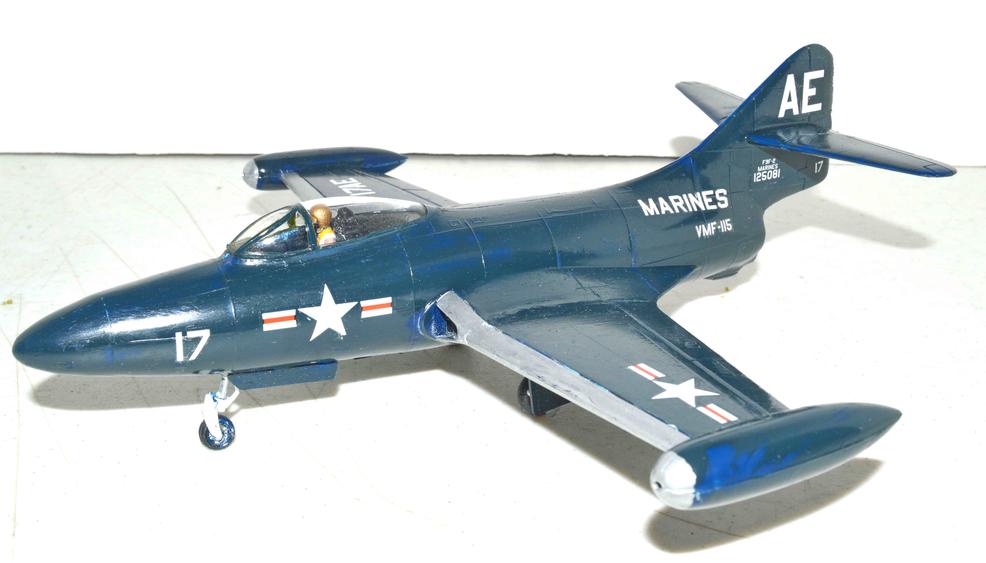 Feller DeWitt cracks me up. He brought in the AMT 1/48 F-9F Panther. Feller says AMT stands for Awful Model Technology. You know what, I agree!  He said he glued his fingers to the nose of the plane. I ask, who doesn’t?   This baby was hand painted and built straight out of the box. He wishes to thank his wife for helping unstick his fingers from the model! 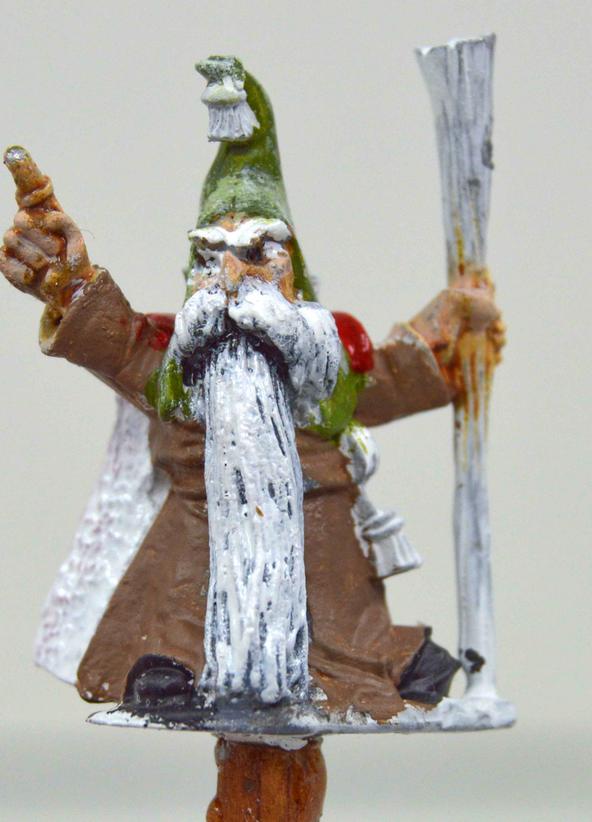 Next up is Robert Jackson sporting a fashionable sling. When asked what happened, he said, “When your wife asks if her dress makes her look fat, be careful how you answer!” Yeah, right!  Complications due to old age are more like it! ;-) Here is his cast metal “angry wizard” in 1/28th scale. Welcome back, Robert. Hope 2015 is better for you! 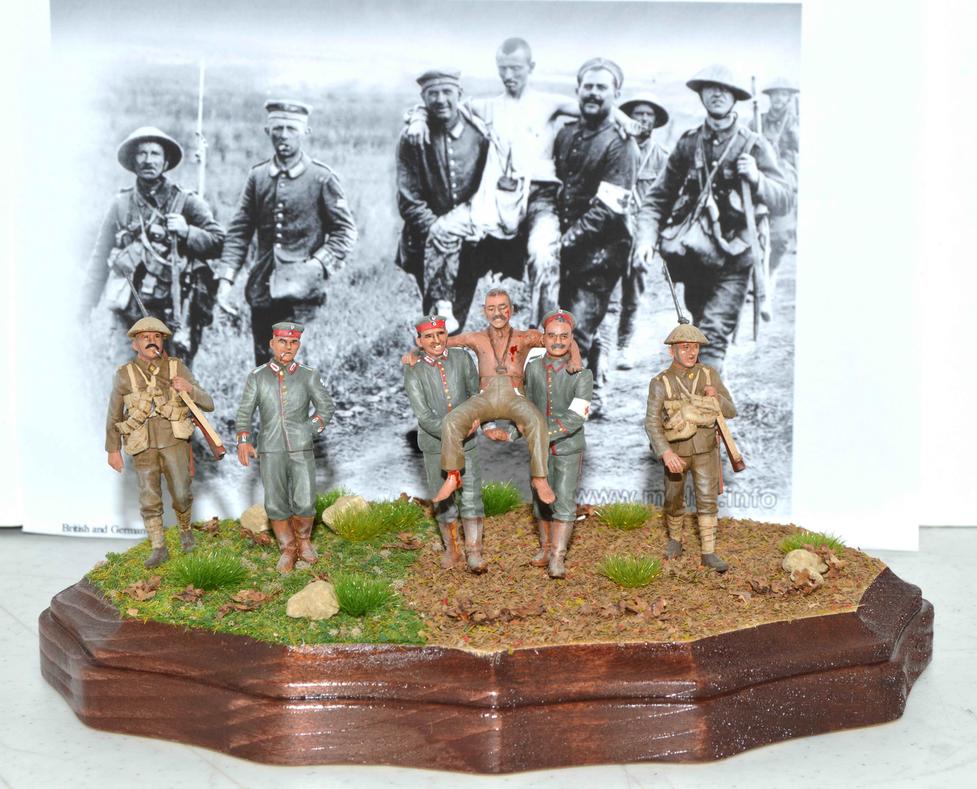 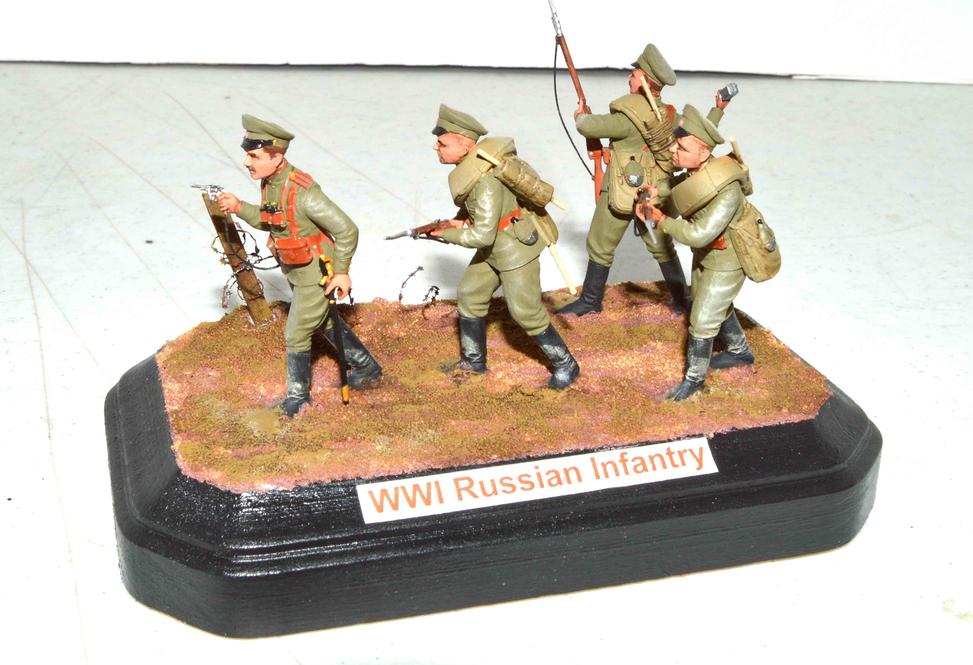 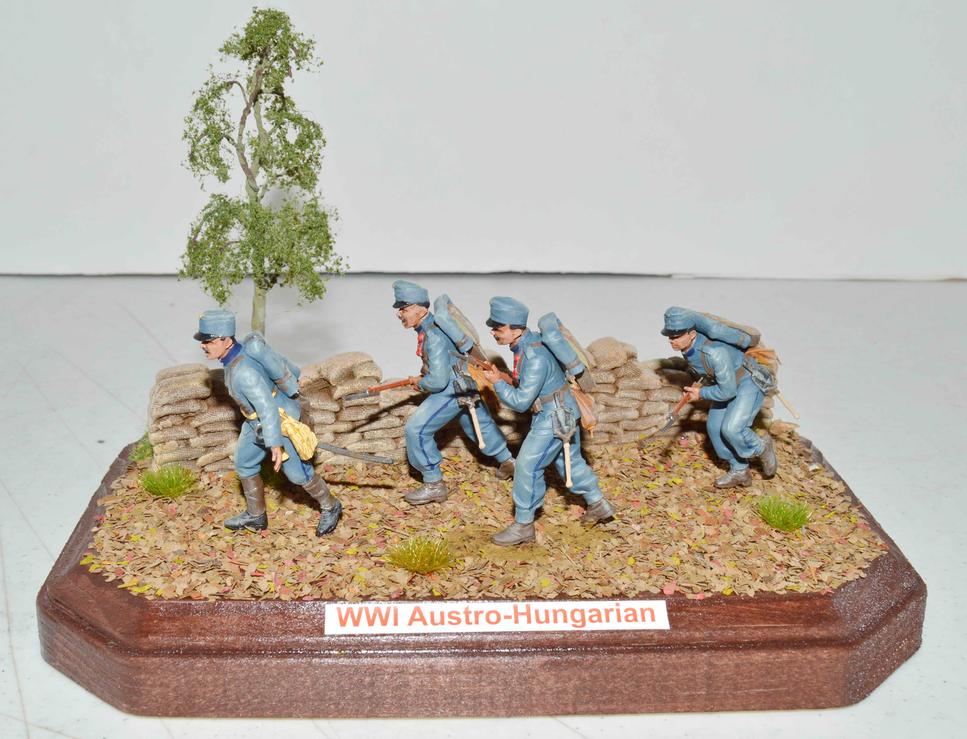 Bob Thompson tried something new today…he spent less time describing his models…and I didn’t care for it. I don’t have anything to write about. Go back to the old way…or give me a write-up. Of course, Al’s camera was giving me fits about then and I missed most of what Bob said and I still didn’t get a shot of Bob!  But your little WWI dioramas look amazing, Bob! 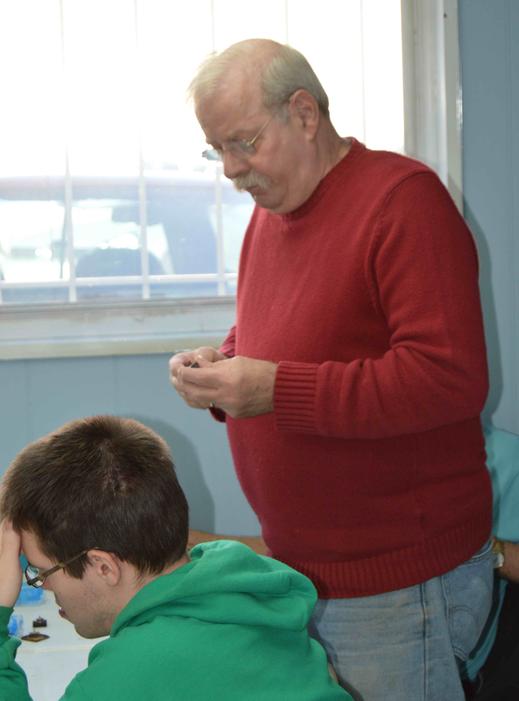 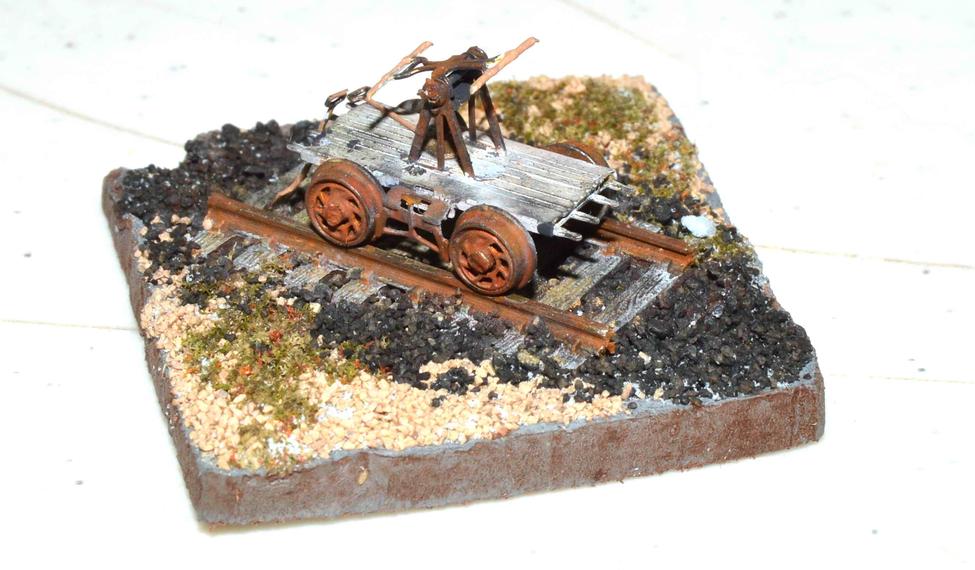 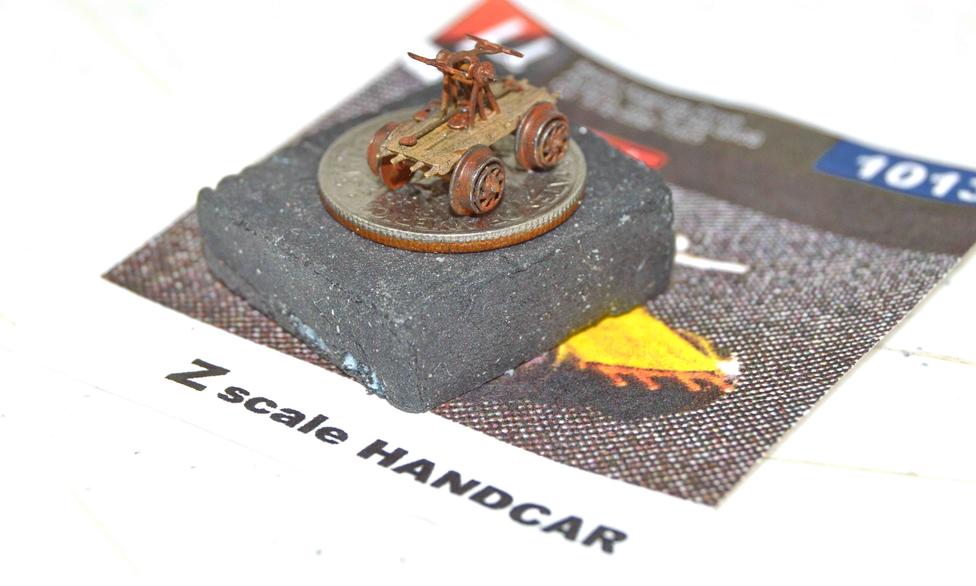 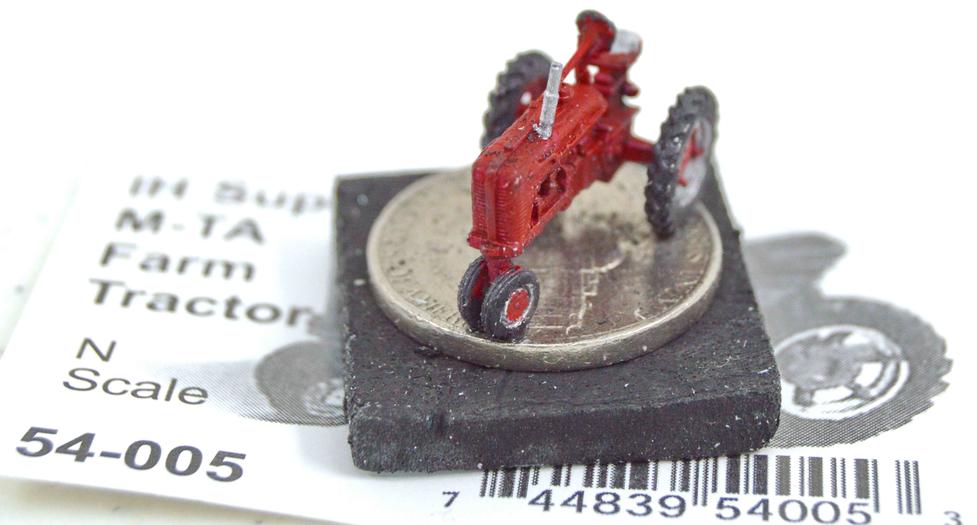 Al George remains the master of the sub-miniature. Not satisfied with N scale, he is now moving into Z scale. Good grief. Those are dimes…not silver dollars! Impressive! 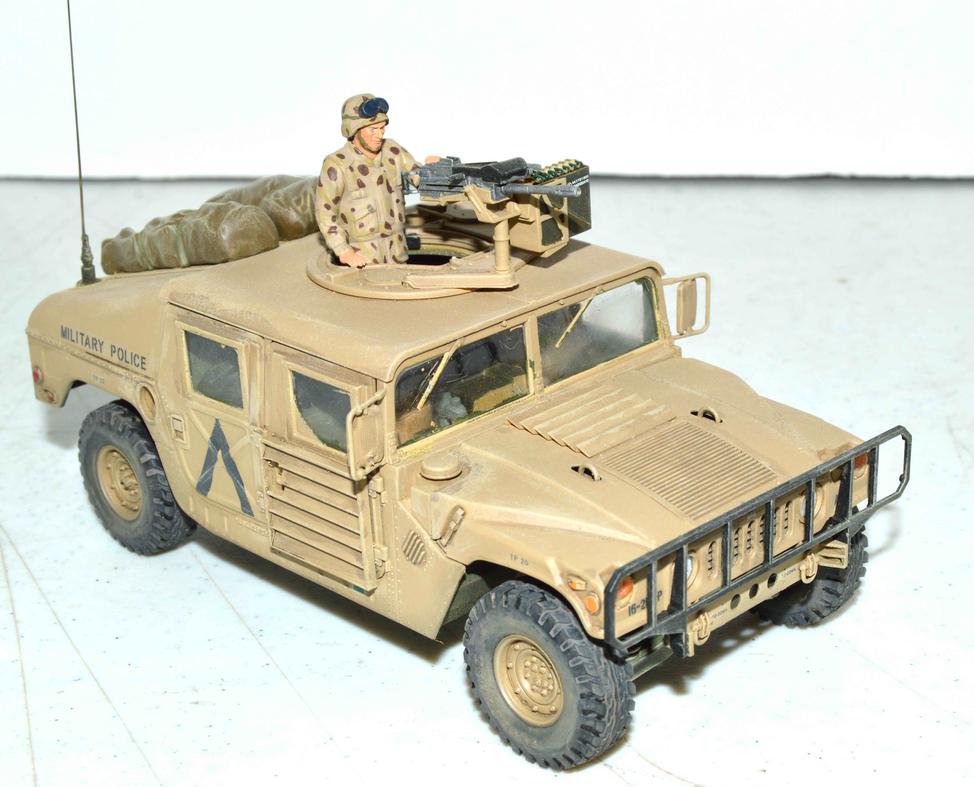 I’ve already warned you about the photo quality…blame the photographer.  Let’s start with Brad Hicks.  This guy is good. Take a look at his M1025 Humvee made from the Tamiya kit…I think Brad is Tamiya’s biggest fan…bigger even than Bob Thompson. He upgraded the model with modern U.S. military equipment, inside and out, including Combat Identification Panels (CIP). He also dry brushed and used Tamiya (of course!) weathering material. Great job, Brad!