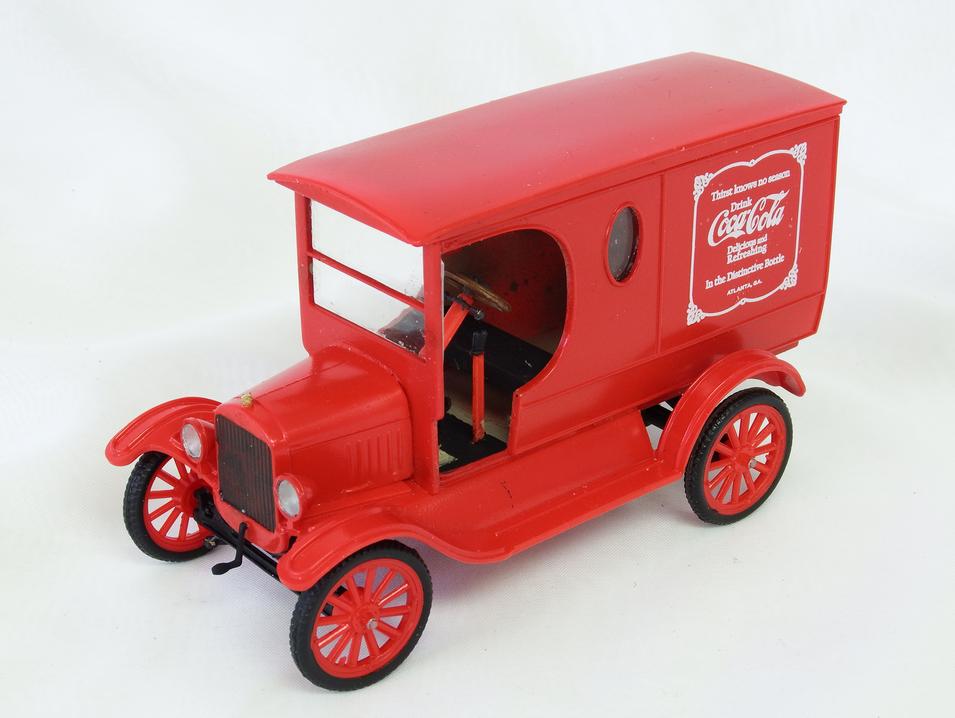 Here is a shot of the deplorables.  Good luck Doug Schuur with your back surgery!! 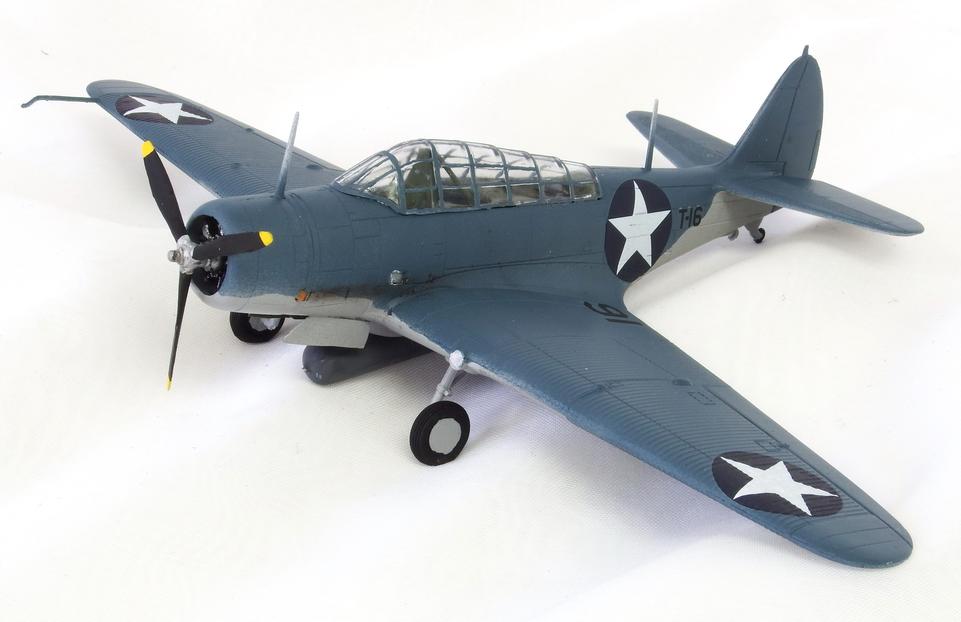 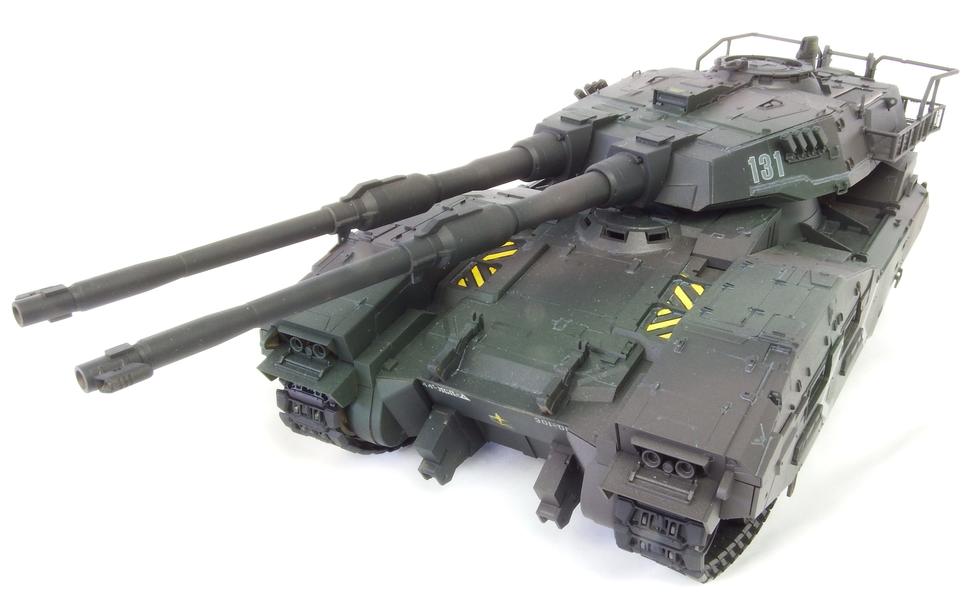 Stan “The Man” Carrier brought in three models.  The tank is a 1/35 Bandai U.C. Hardgraph Semovente twin barrel painted in Nato black, dark iron, and black green.  This puppy is huge.  Looks more like 1/16 scale!  Next is his 1/72 Academy/Minicraft PV-1 Ventura.  The kit sucked.  He painted it with Tamiya paints and I think he said he used Silly Putty.  And then we have his 1/72 Admiral Models (no good!) STBD-1 Devastator.  This was a horrible kit with bad resin, PE, and plastic.  Stan still turned out a great looking model! 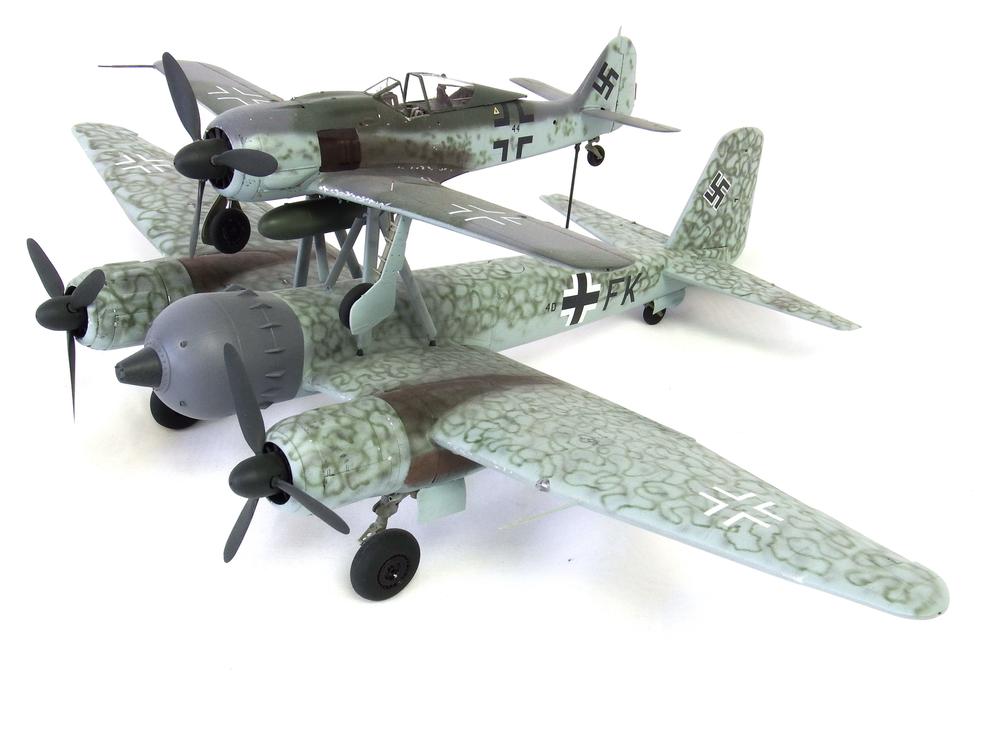 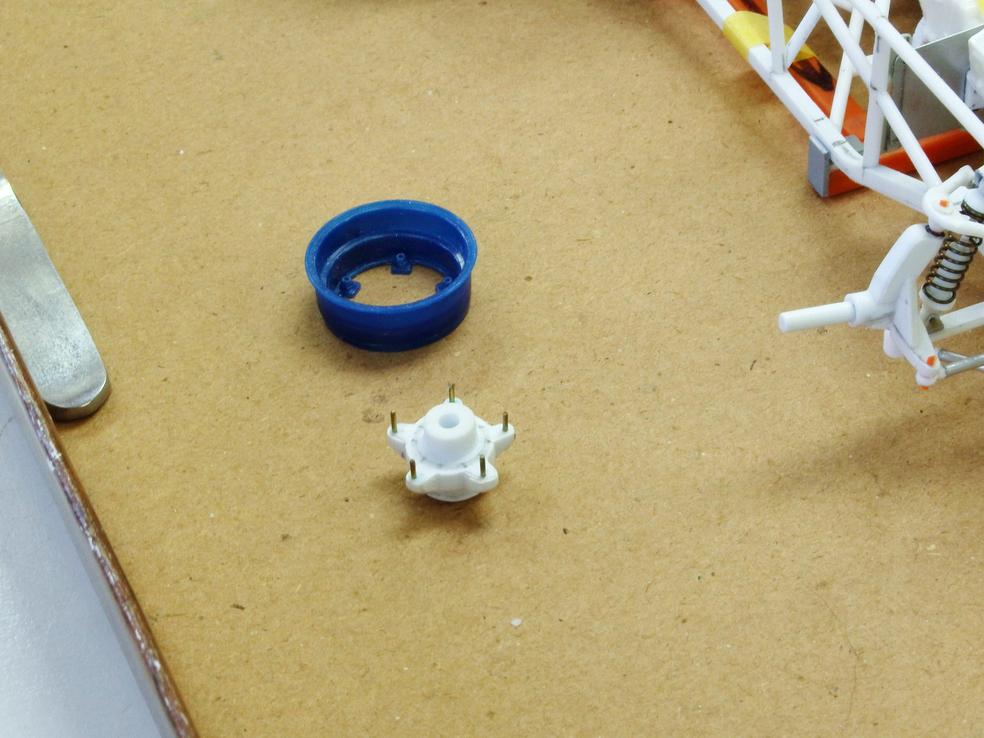 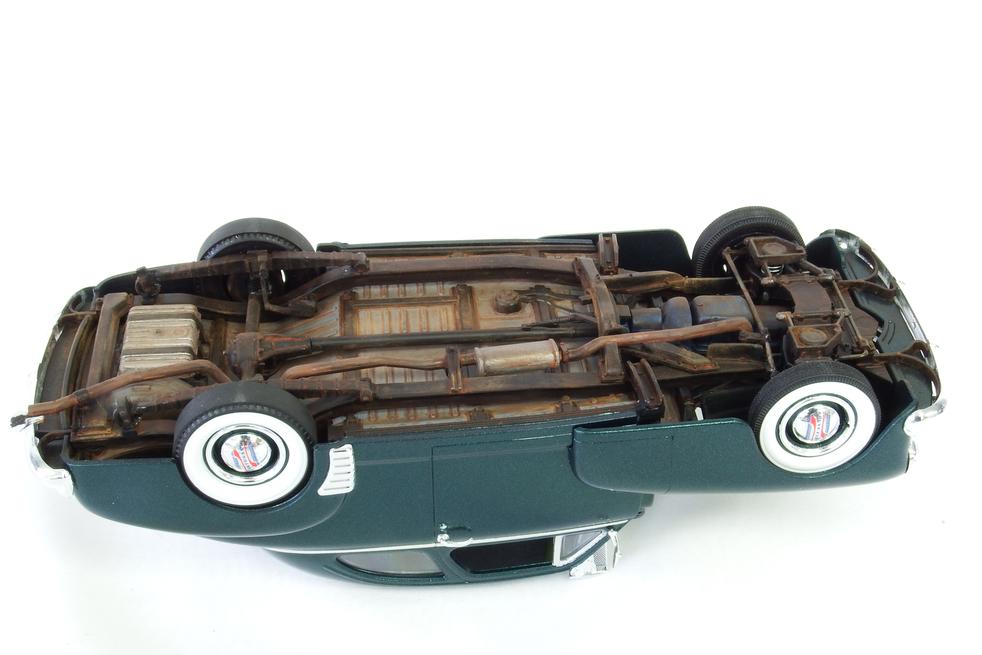 Remember how I used to hate Dan Jayne?  I’m happy to report I have someone new to hate:  JR Burggren.  He’s been working on this mostly scratchbuilt dirt track late model car for about five years.  It has working suspension and steering…see why I hate this guy!  Look at this tiny scratchbuilt rotor…he had to make four of them!  Holy S*#! Again!

And in last place, skill level 1.55 brought in his 1/87 Revell structure model from 57 years ago.  Parts were missing so he had to do some serious kit-bashing.  Dug Boon enjoyed the D. Boon Doggle building!  Even today, nobody comes close to the brick and roof detail on this kit.  Good stuff.

Dave Martin brought in two auto models.  That’s different…but nice!  The ’71 Ford T-Bird is from AMT.  Dave painted it in gold and black with white hubcaps.  The 1984 MPC Chevy pickup is Dave’s tribute to the L. A. Raiders who were Super Bowl XVIII champs.  Dave is a walking encyclopedia of the Raiders!!  Wow!  Dave said the engines in both kits weren’t worth a S*#!  Those are Dave’s exact words….  Nice work, Dave!

Doug Seekman showed off his 2011 build of the German Mistel 2.  A pilot flew the plane on top and from a few thousand feet released the Ju88 to fly to its target.  It didn’t work.  There were problems with the GPS and inertial guidance systems…..  Doug says he used Model Master paints, decals from his decal bag, and that this DML/Dragon kit went together very well.

Bob Thompson, the last surviving Civil War Vet, brought in a model of the cannon he manned at Gettysburg.  This was the ancient Life-Like kit that was acquired from Judy Jayne.  He thinks it is 1/16 scale and he painted it with Vallejo.  Good job, Bobbie!

Well, this is a first for me.  Here is Keith Lemke’s fabulous Galaxie ’47 Chevy Fleetmaster.  He says it was a great kit.  Well, he did a great job on it!  Wow!  He built it stock because of the wheels and tires.  But here’s what’s weird…as fantastic as it is…I think the bottom of the car is even more remarkable!!  Has anybody ever entered a model car in a contest upside down??? 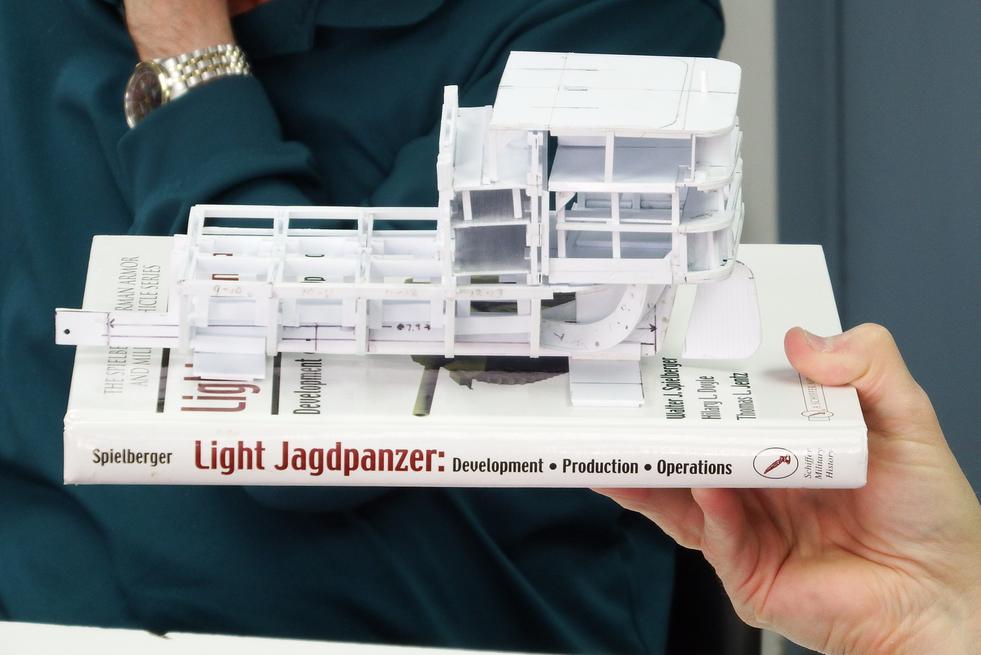 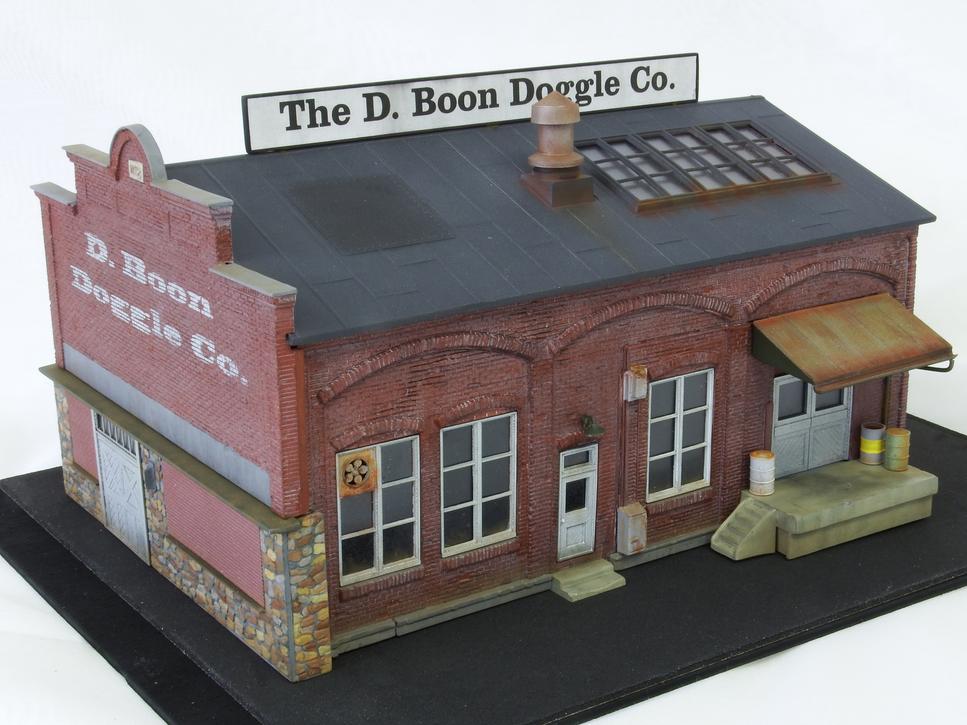 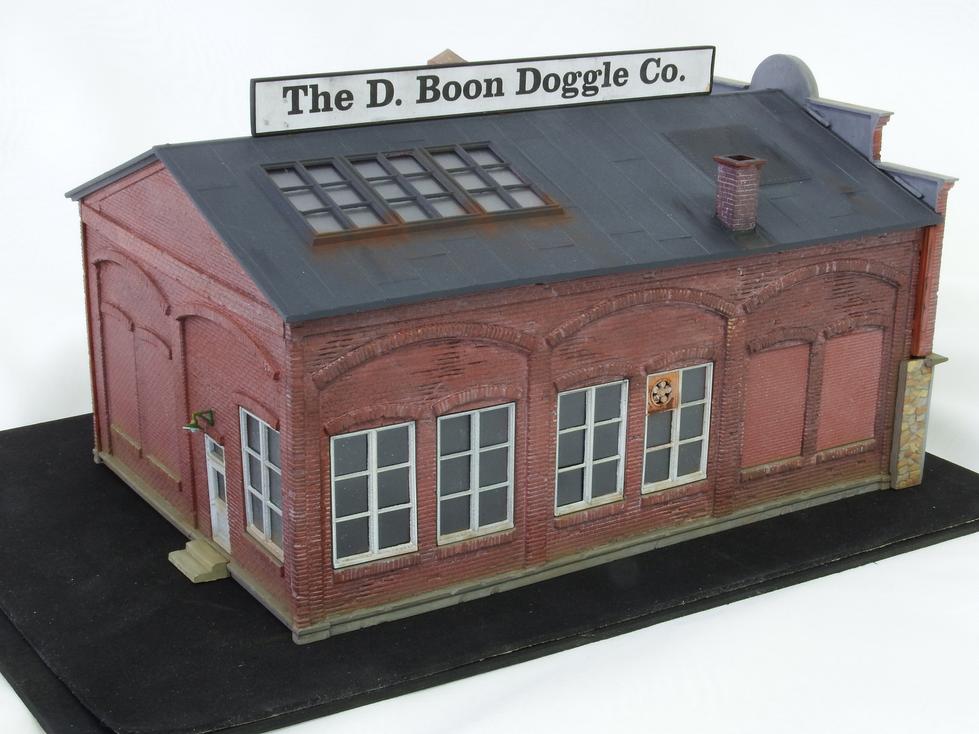 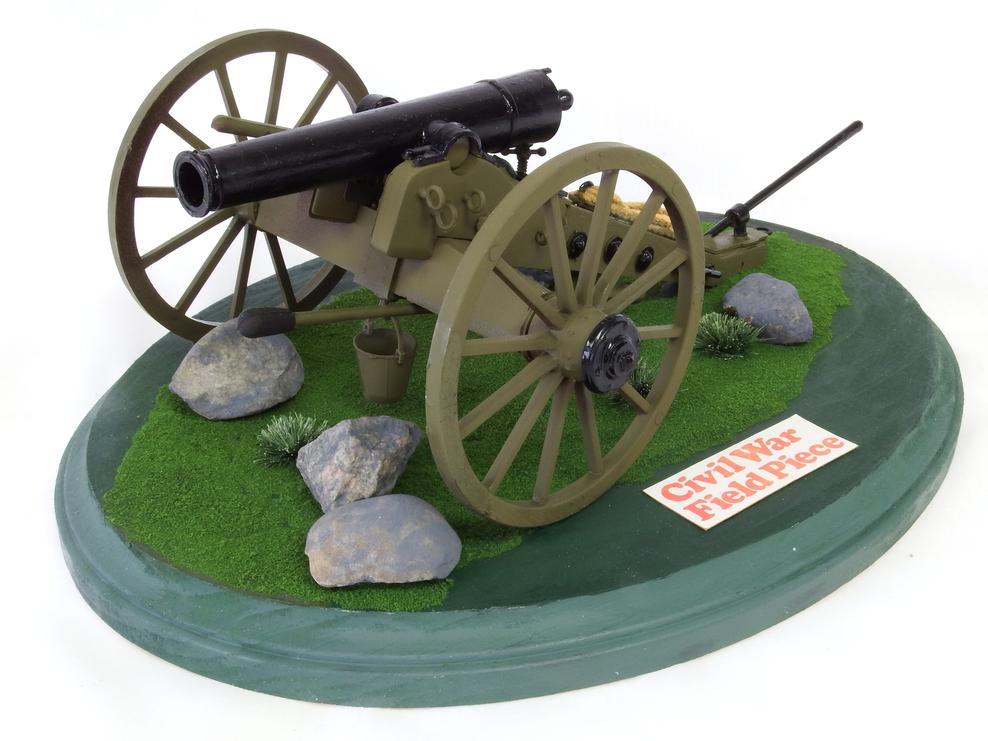 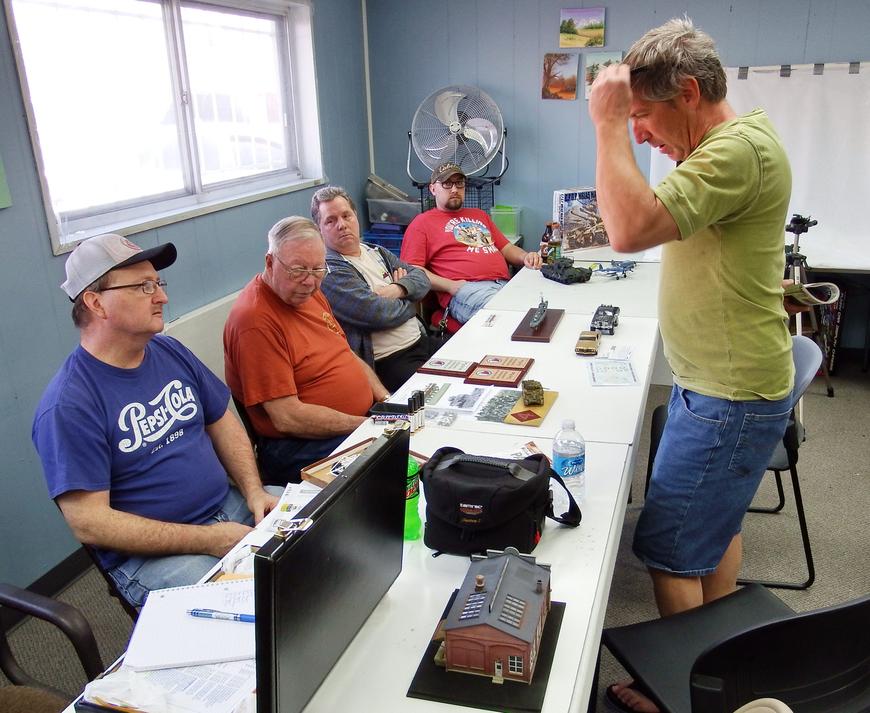 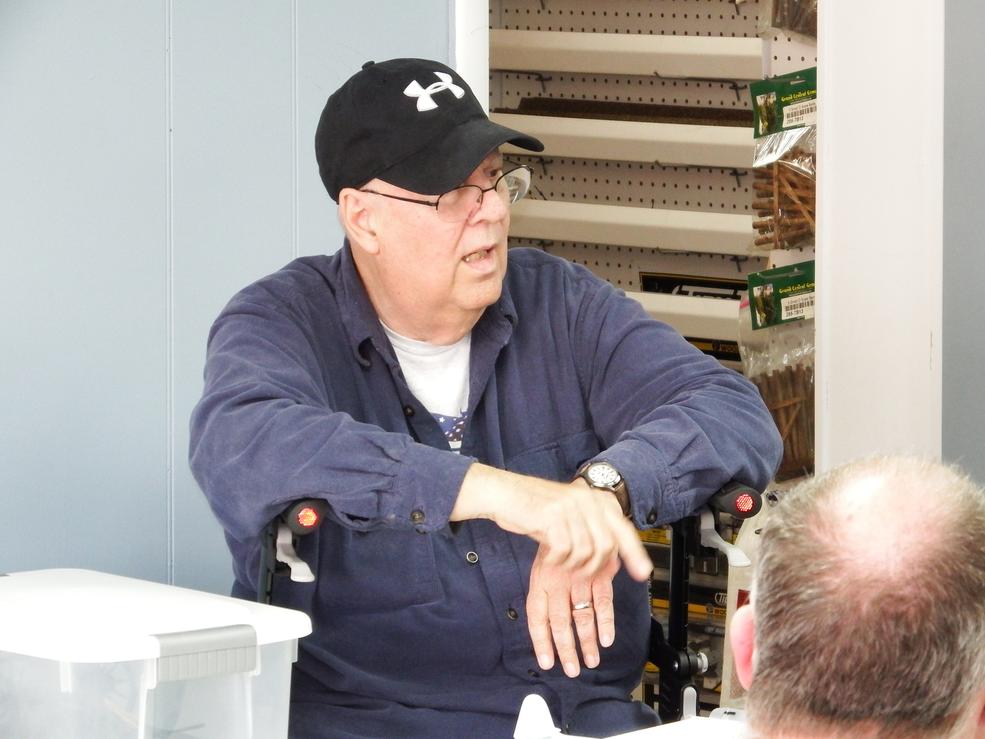 Appears Keith has some explaining to do to the President....

Alan Vandam’s M4 Sherman flame thrower tank (also on the Homepage) looks like the one his Father saw on Iwo Jima.  Alan used parts from three M-4 kits, the sandbags and tarps he made, and he added a ton of extra stuff…too much to list here.  See that gray behind the timbers on the flanks?  That represents the concrete that was added to help protect the tanks.  Never heard of that before.  Fantastic job, Alan!

Ooops…just found another photo.  Big Daddy brought in this model built from the ancient AMT(?) kit.  He made it for a friend.  Way cool.  No other info.

Don't forget 5 more tips and tools for the May Work Session! 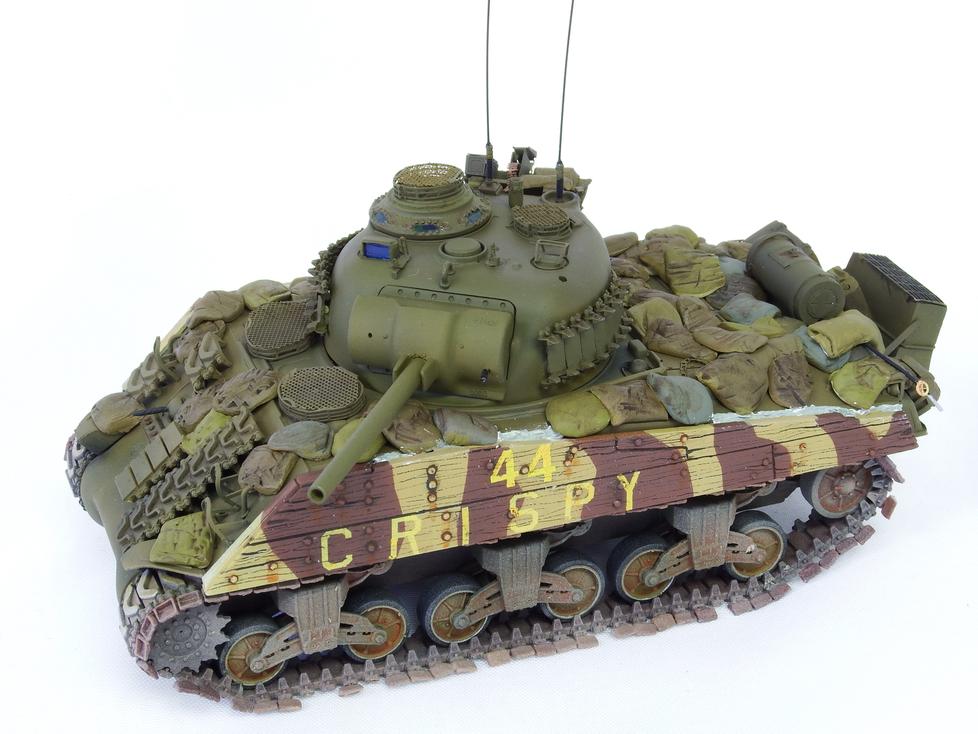 Uh oh….Mark Jahsan just started modeling ships.  Man, is he off to a great start!  Here is his 1/350 USS Fletcher from the late 1990’s Tamiya kit with PE from Tom’s Modelworks.  This is how it looked in 1942.  Also, the cat is out of the bag…he is about halfway through building the HKM 1/32 B-17G.  Holy S*#!  (As Dave would say…)  This thing is absolutely amazing.  One of these took first place down in Indy and Mark's is much, much better!!  Stay tuned! 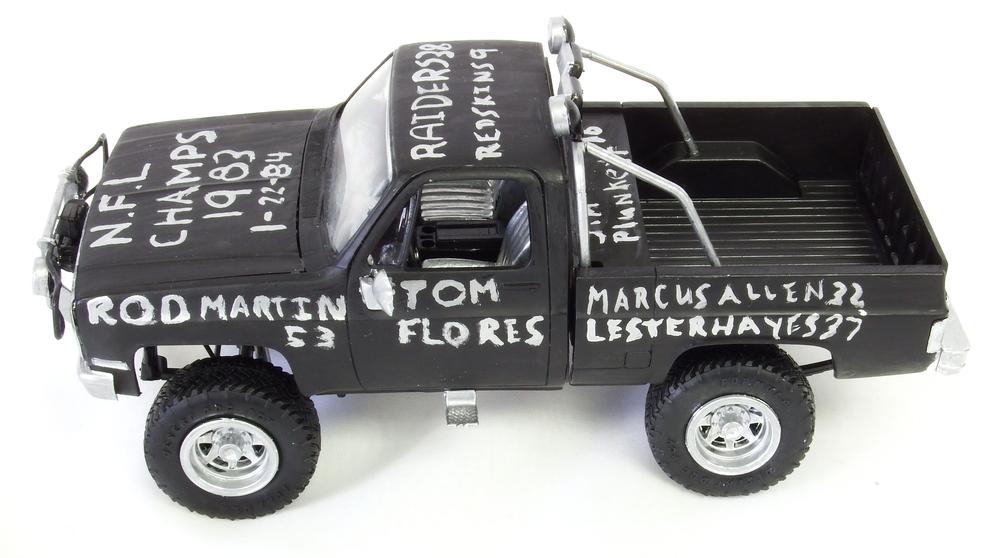 In no order, here is Prof. Bill Leger with his Light Jagdpanther.  I thought he was working on an early sailing ship but photos don’t lie!  Ok, Ok…this is the aft section of the totally scratchbuilt ship he has been working on.  Unbelievable!

This is just incredible!  I love it! 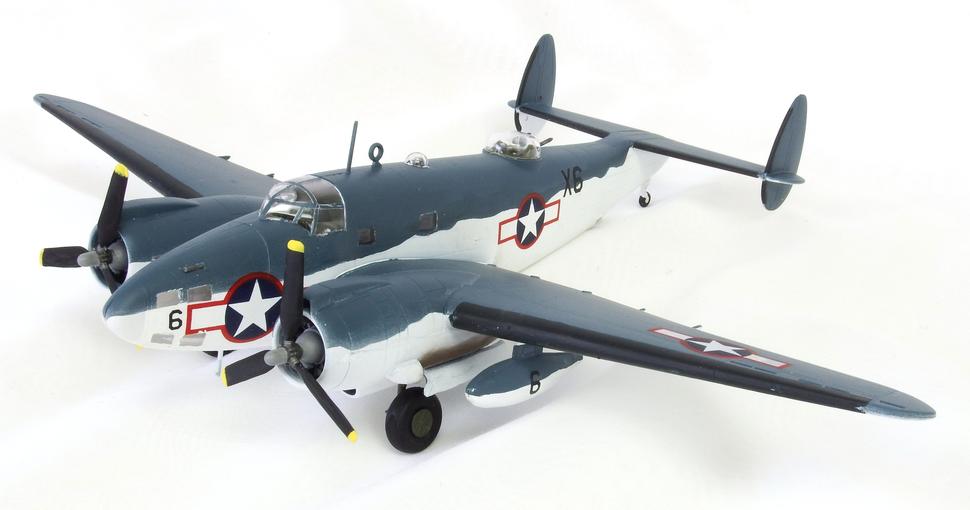 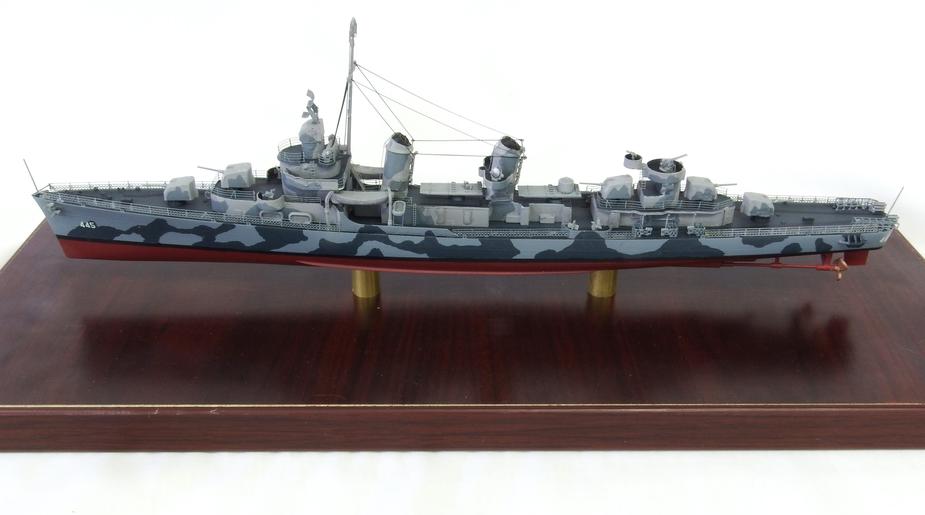 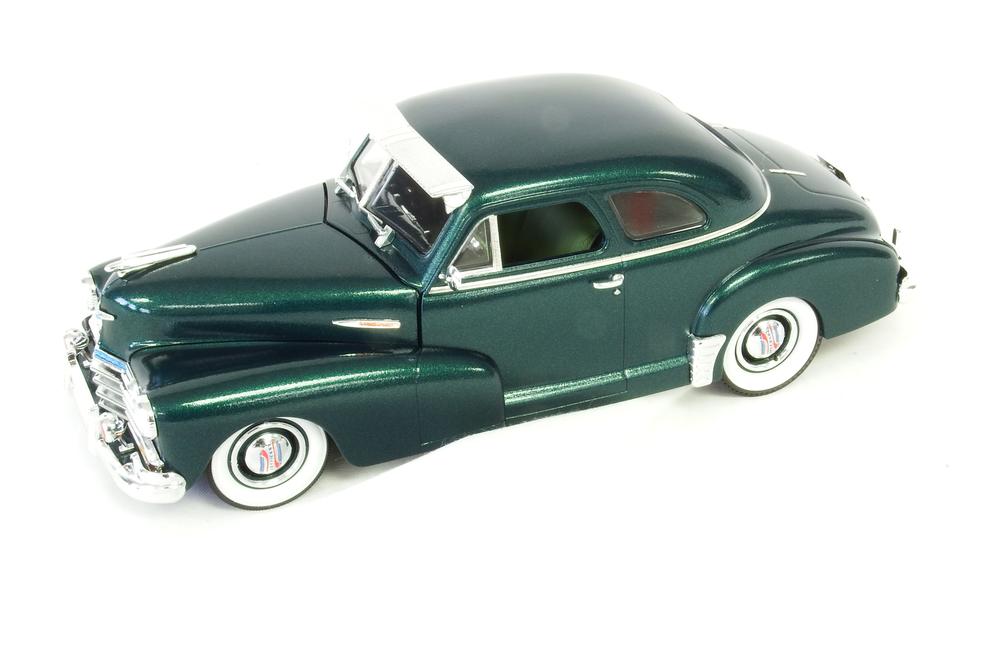 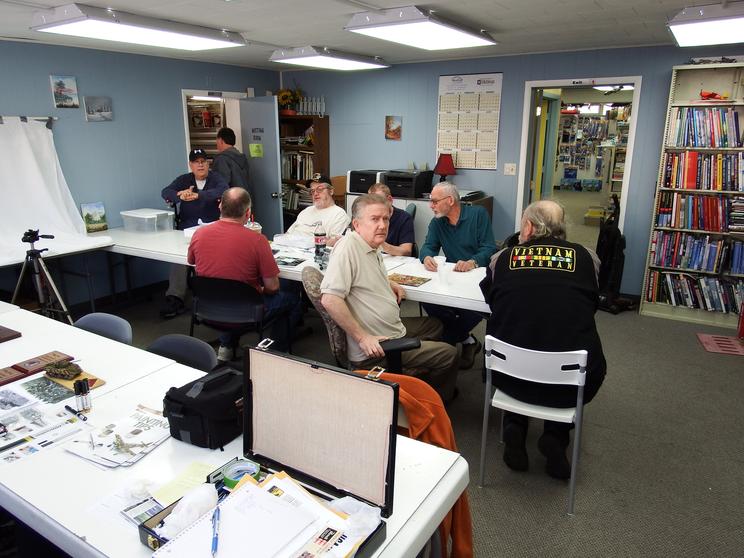