That’s all the news that’s fit to print…that’s why there are no photos of me.  See ya at the September Work Session! 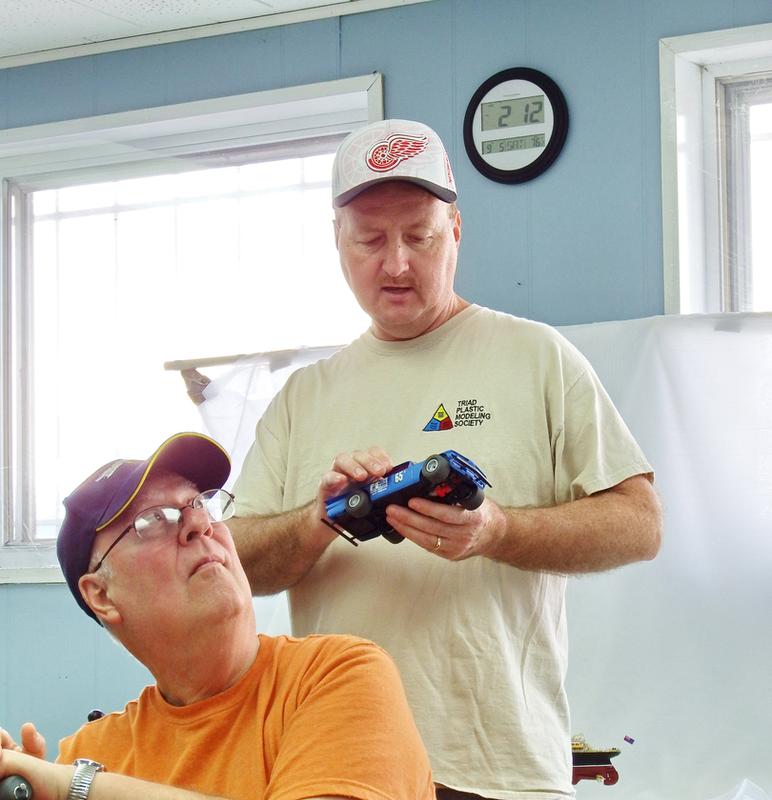 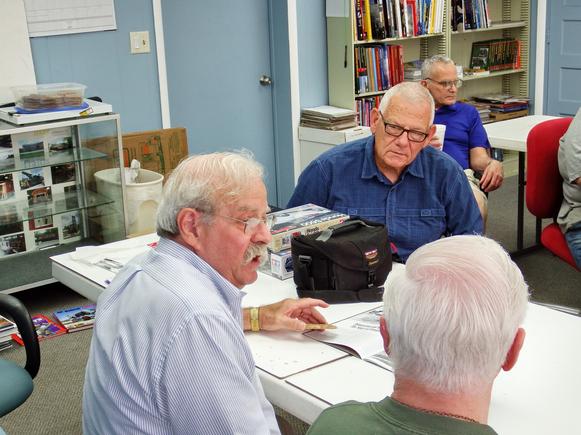 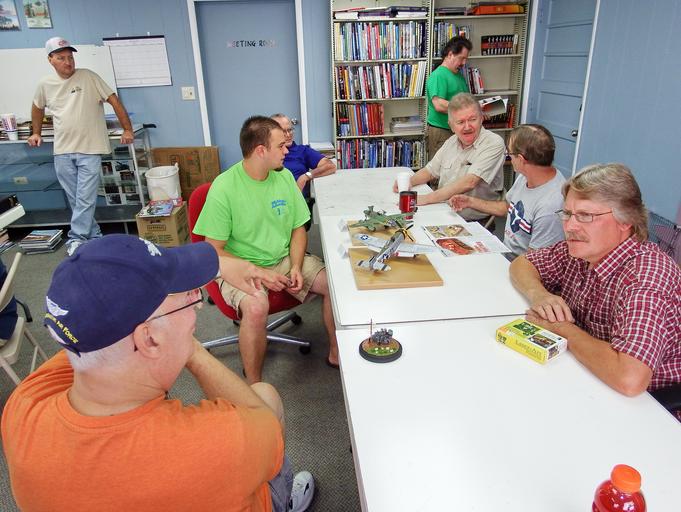 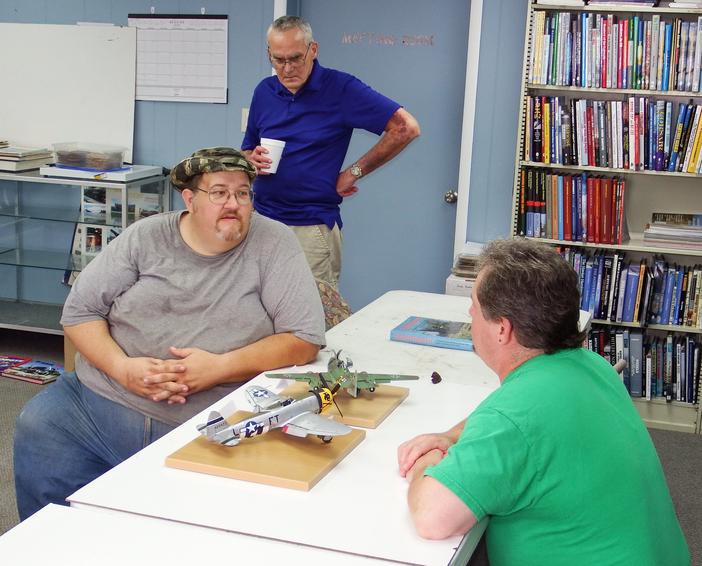 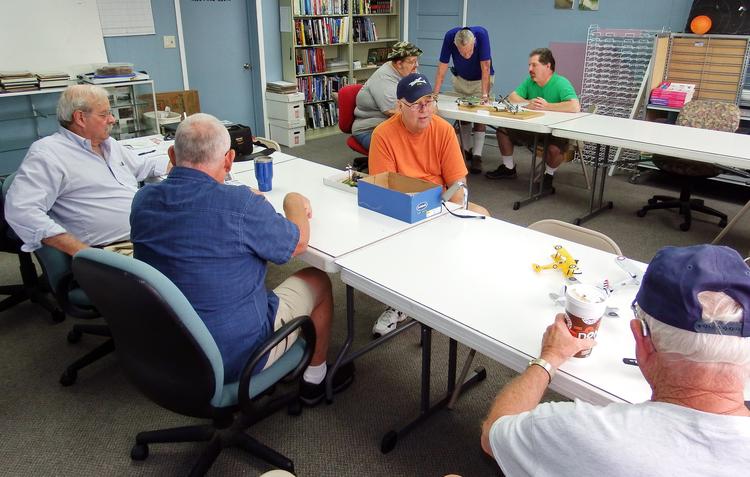 Back by popular demand, here are some photos featuring the stars of TRIAD. 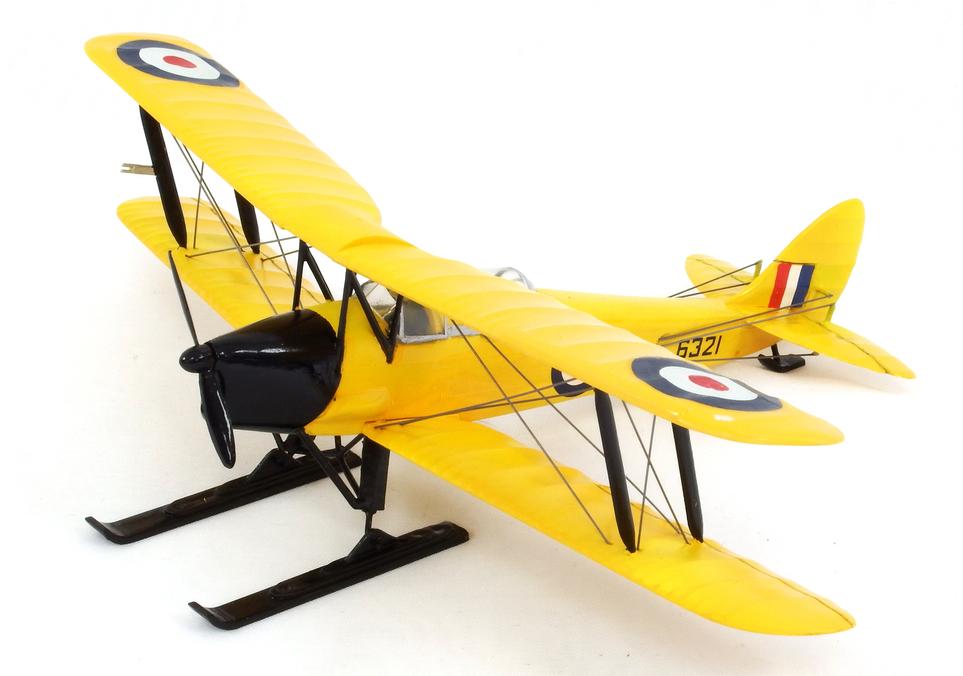 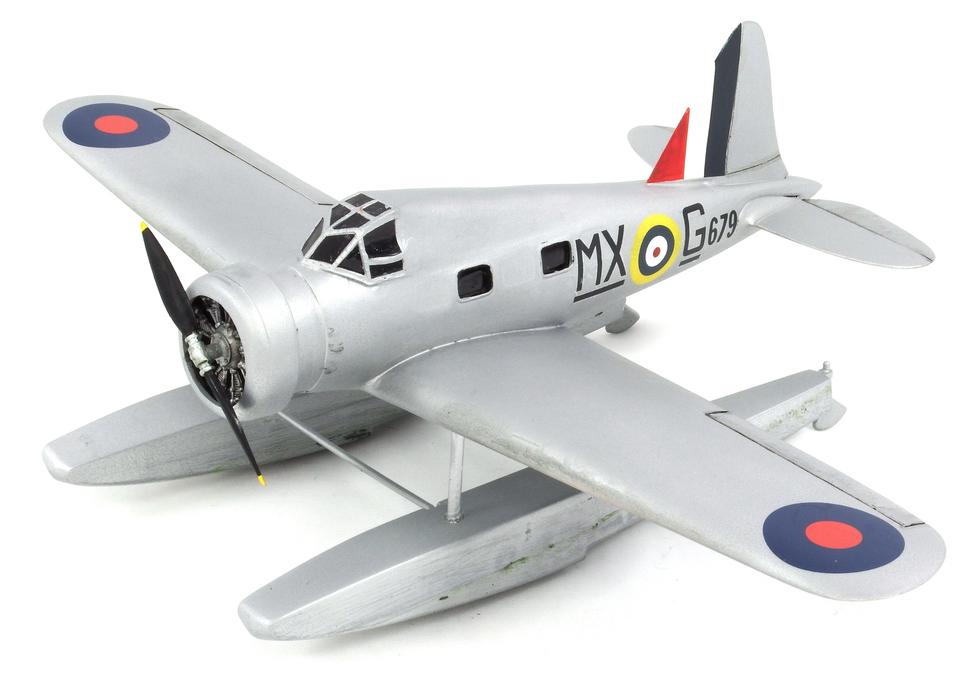 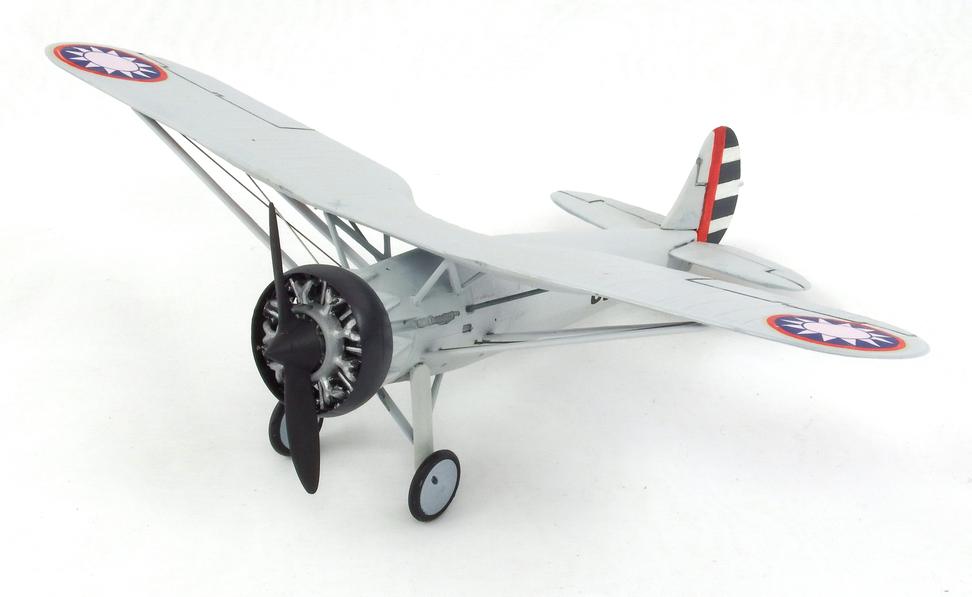 Mark Jason’s theme for today is “modified kits”.  First up is his Nakajima Type 91 fighter in the markings of the Kwangsi puppet government.  He started with the 1/48 Lindberg Bulldog and he left off the lower wing and added new struts, landing gear and the cowl ring.  Good grief.  Next is the Northrup Delta as used by the RCAF for sub patrol.  This one started as an AMT Vega and, get this, converted it from a high wing to a low wing.  Holy cow!  What skill!  He then added floats.  Awesome.  The third model is the Smer Tiger Moth to which Mark added new landing gear, skis, and he just happened to find a suitable vacuum formed canopy in his parts box.  Amazing, stuff, Mark! 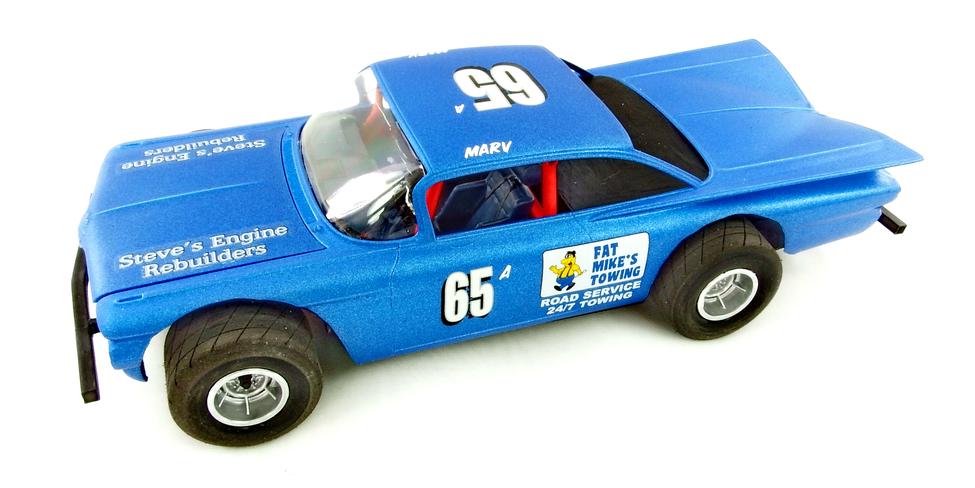 The Pres, JR Burggren, just completed this great looking model of the racecar his Uncle drove in ’68-69.  It started as a Revell ’59 Chevy Impala dirt track stocker.  He scratchbuilt the roll cage, interior, bumpers, added larger tires and grooved them.  He used icy blue one coat lacquer paint over coated with Dullcote lacquer.  This guy is good.  And if he starts paying us to belong to TRIAD, I’m really going to like him a lot! 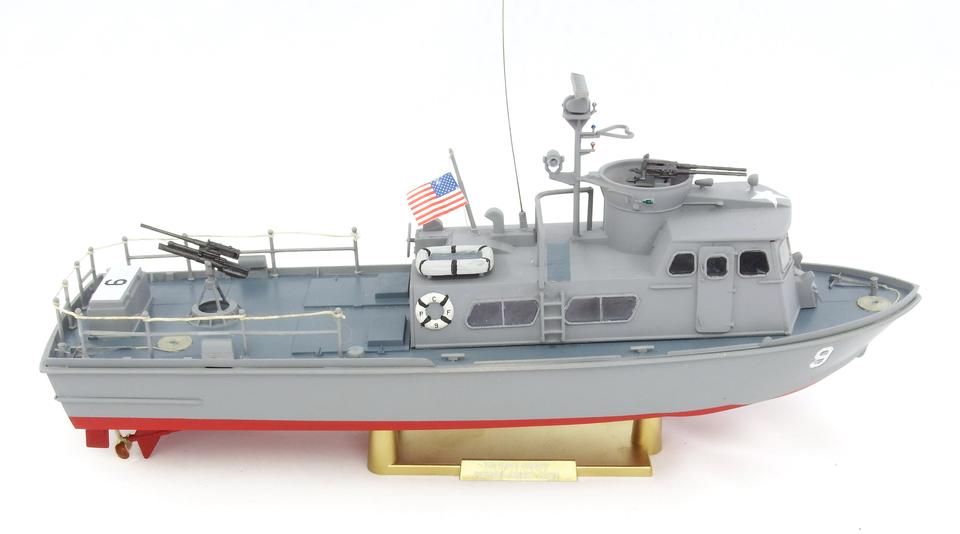 Professional modeler…yes, he has lost his amateur status…Big Daddy Bridenstein sold that PBR you saw in the August WS Report and he sold this PCF (Patrol Craft Fast) or Swift Boat during today’s meeting!  I can’t give my models away and he’s sold two in the last three weeks.  What a retirement!  Great work, Jerry! 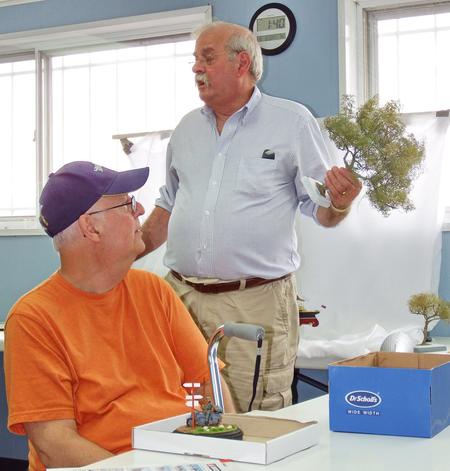 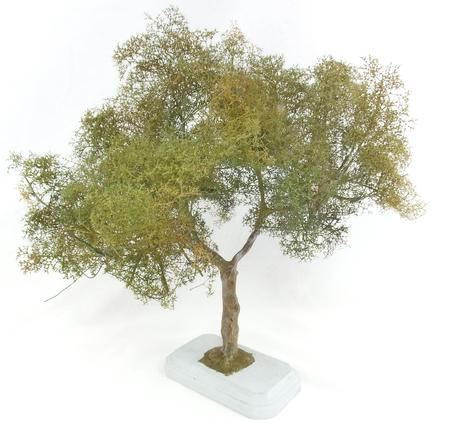 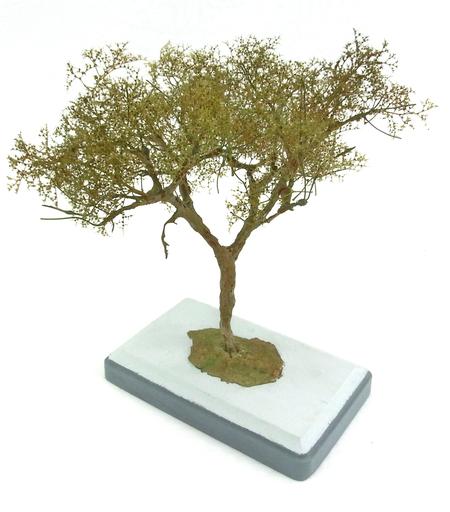 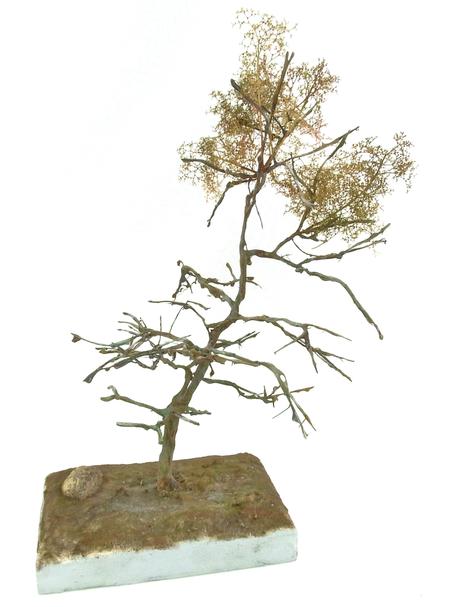 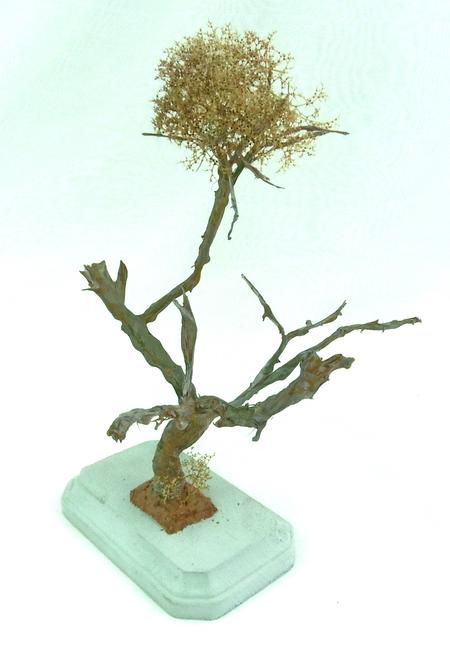 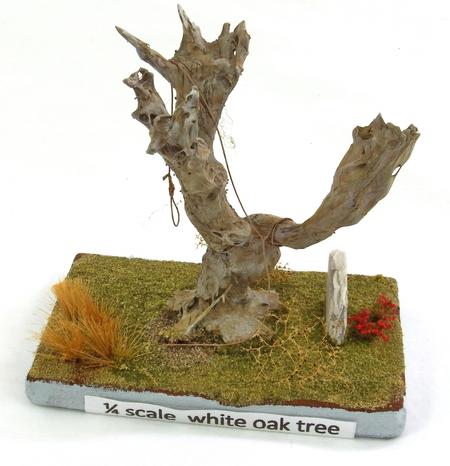 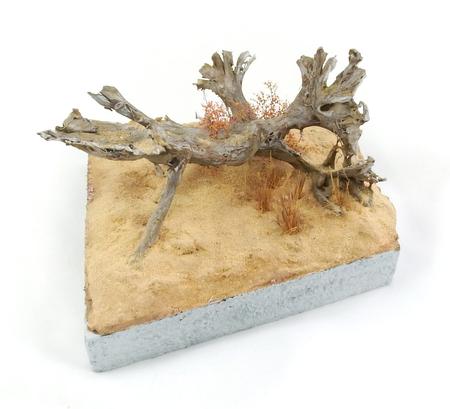 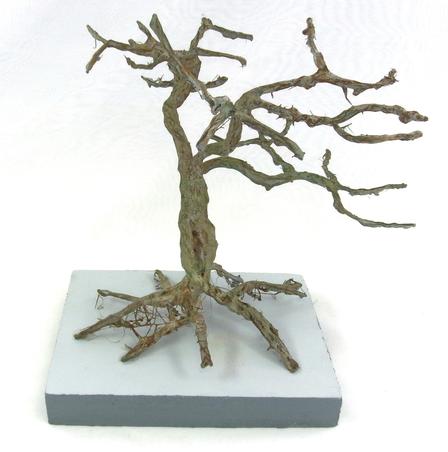 Al George has been busy making trees!  He typically uses wire that is coated with styrene that has been dissolved in Tenax(?).  Here are seven examples of his handiwork! 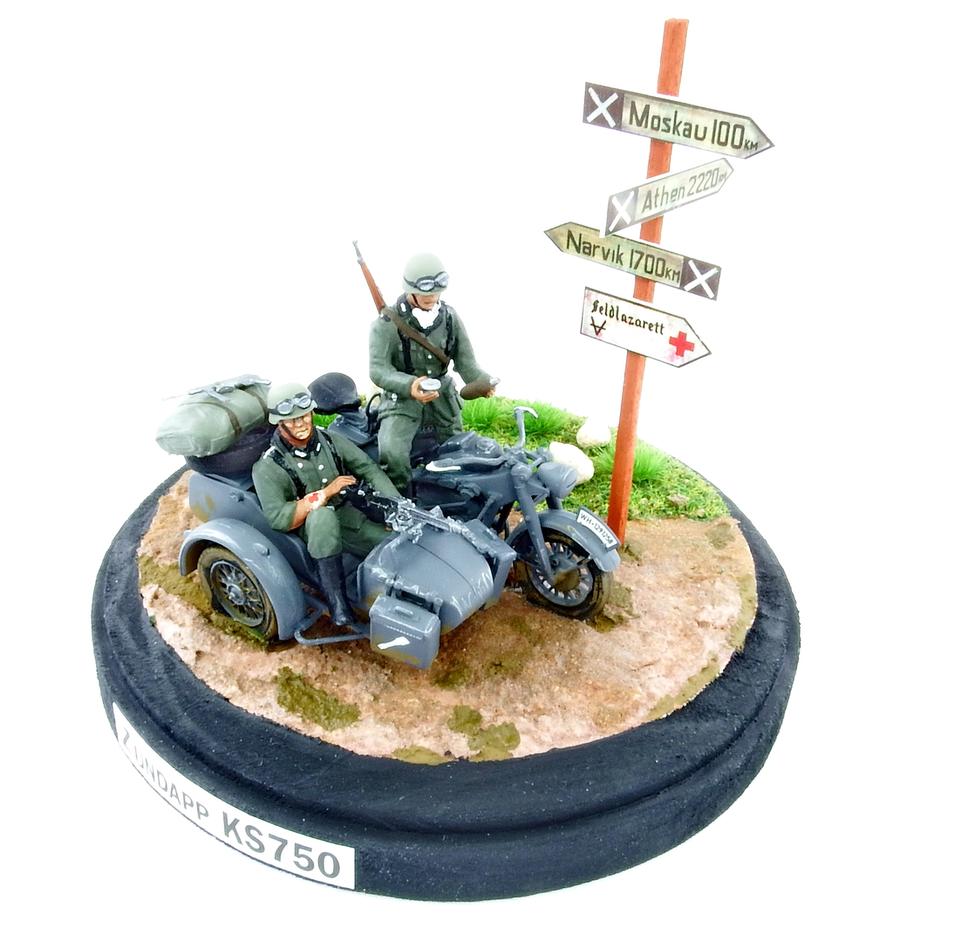 Bob Thompson continues his interest in WWII motorcycles with this 1/35 Italeri Zundapp with sidecar.  18,000 of these things were made during the war and the ones used in cold weather had heaters in the sidecars.  The signs are aftermarket and the post is made from balsa.  The rocks are made from...rocks.  ;-)  The base is Sculptamold and Woodland Scenics and he used Vallejo paint. Great job, Bob.

Feller Dewitt brought in two 1/72 black aircraft.  The first (left) is the MPC/Airfix RB-26C Invader out of Shaw AFB in S.C.  Feller kept us entertained with his revelation that this paint scheme shows all mistakes.  Fortunately, he didn’t make any.  He had a little problem with model being a tail sitter.  A fishing sinker in the nose wasn’t enough…he had to add BB’s to the nose wheel area.  The second aircraft is the Martin B-57B which I have found on line to be a Canberra or the Intruder.  This aircraft was also located at Shaw.  As usual, Feller painted the models with Model Master Enamels.  Great job as always, Mr. Dewitt!  He also told us that a terrorist attempted to blow up a Mona Shores school bus.  But the terrorist gave up after burning his lips on the hot exhaust pipe.  Blow up…get it?  Hey, don’t blame me!!  ;-)

Staying with the ships, here is Ryan Truax’s AMT 1/525 Hindenburg airship.  Oh the humanity.  Ryan did a beautiful job.

Let’s keep the Danny theme going.  Here is the night photo I promised you on the homepage.  Danny Sutton has loaded this Gunze Sanyo kit with led and fiber optic lighting.  The Lusitania is painted as she appeared in 1915 when she was sunk.  During the war, the ship would have been blacked out…but this is what she would have looked like if there had been no war!  Great job, Danny. 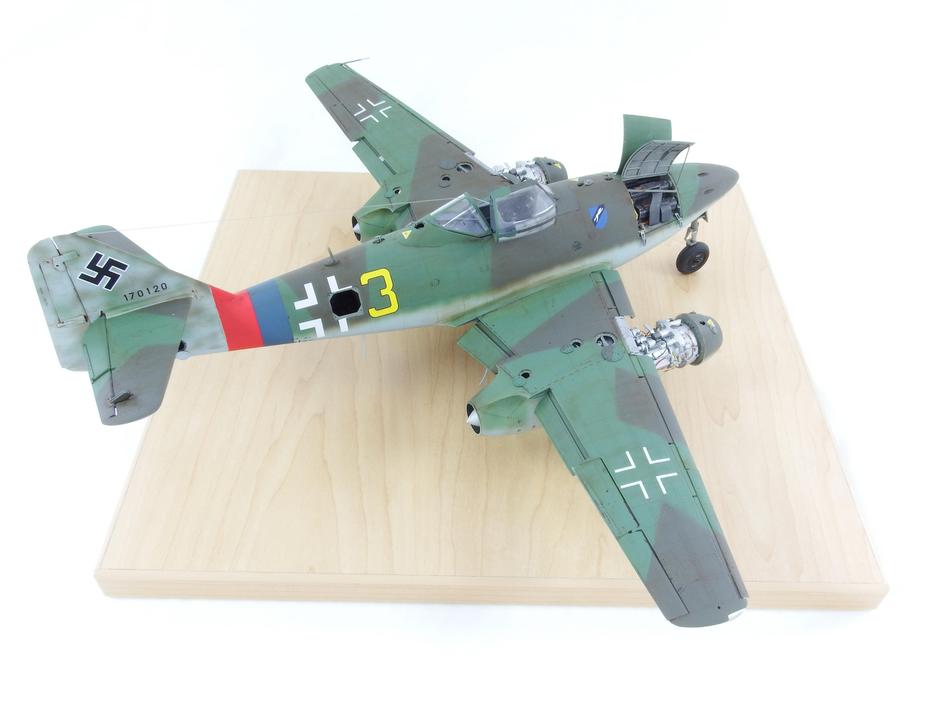 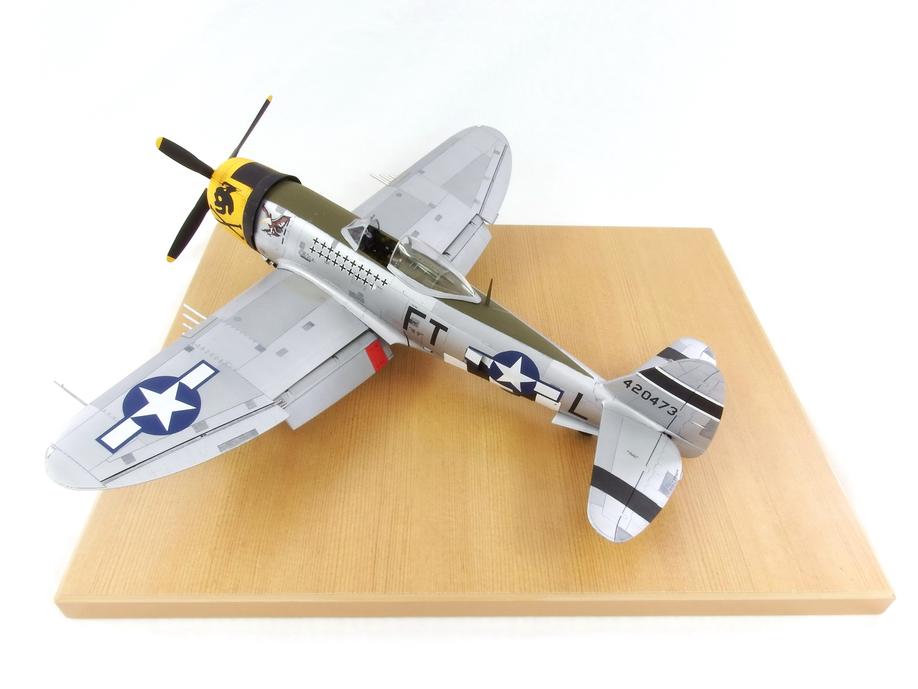 Eighteen members gathered around the tables to ooh and aah over the latest creative masterpieces brought in by our amazing band of modelers.  We also booed and moaned when that darn Tom Bauer won yet another raffle!  What is the deal with this guy!!  I thought he was banned from the raffles?
Let’s start off with the THE MAN.      Dan Jayne brought in two gorgeous 1/32 aircraft models that are not cutaways.  The first is his Hasegawa P-47D bubbletop Thunderbolt.  He painted this with Testors rattle can silver enamel and accented some aluminum panels with dark gray.  He used an acrylic wash and built it pretty much box stock.  Wow!  The second aircraft is one of my all-time favorites…the Me 262A-1 fighter version. He used Testors RLM enamels and an acrylic wash.  He detailed the engines which required extensive revisions to the cowls.  Wow, again!