​Stanley Carrier brought in a beautiful 1/35 Meng Mark 4M with the Trophy System…which theoretically is supposed to deflect incoming RPG’s.  He painted it with a mix of Tamiya and Gunze paints.  He used MIG products for weathering.  The tracks were assembled from metal links from a new source he found.  They are fantastic.  Stan will let us know the manufacturer.  Ammo belts from the spares box.  This is a first-class build, Stan! 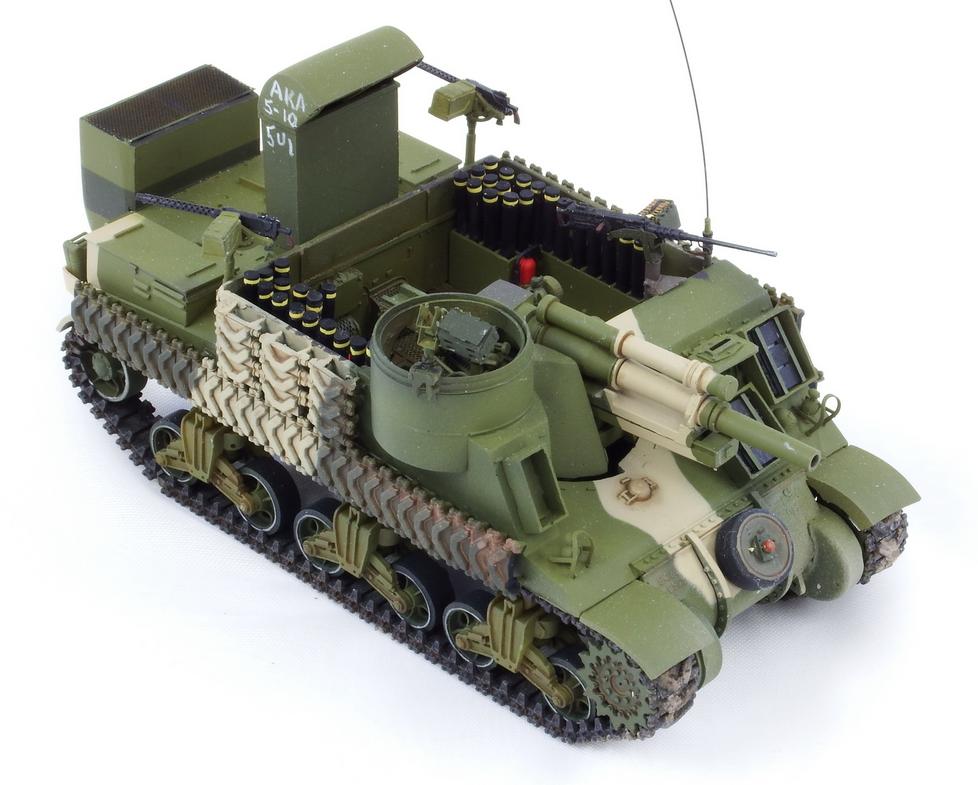 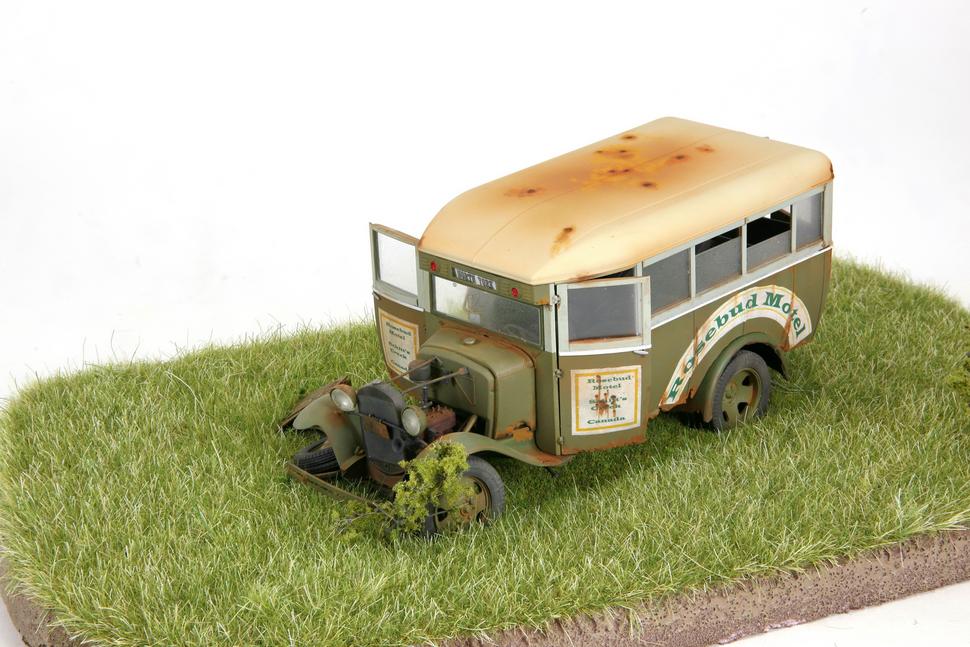 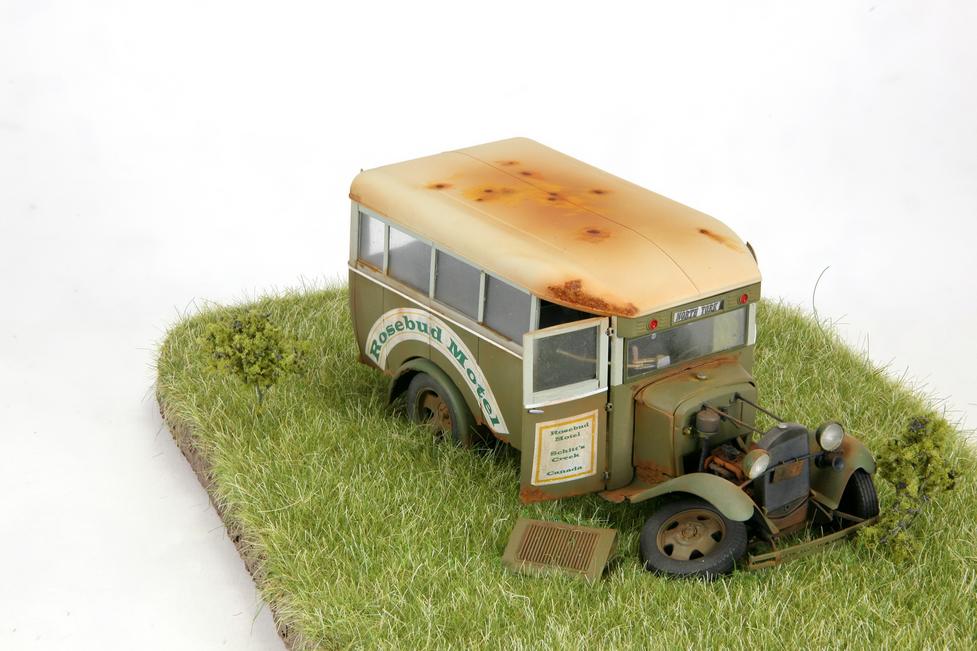 Skill level 1.55 dragged in his Rosebud Motel Shuttle Bus, Schitt’s Creek, Canada
Kit: MiniArt Passenger Bus GAZ-03-30 Kit 38005 (actually a Ford Model AA)
Scale: 1/35
Comments: 7 wheels made up of 58 separate parts.  Wheel rims do not fit tires.  I’d rate this kit a Skill Level 7.  A nightmare.  Super fragile.  But final assembly went well…door hinges lined up and roof fit perfectly.  Engine has 18 parts.  Some of the smallest parts I’ve ever tried to work with…PE windshield wiper a good example!  Did a great job on the exhaust system…which you can’t eve see!
Paint: Gunze MR Color, Floquil, Tamiya, etc., etc., etc……  Used just about every type of weathering powder, rinses, and stains there are.
Base is extruded foam which I reworked to show that the bus had sunk into the ground over time.  Used several types of static grass.
I’m pleased with it but no more MiniArt kits for a long, long time…..as in ever!​ 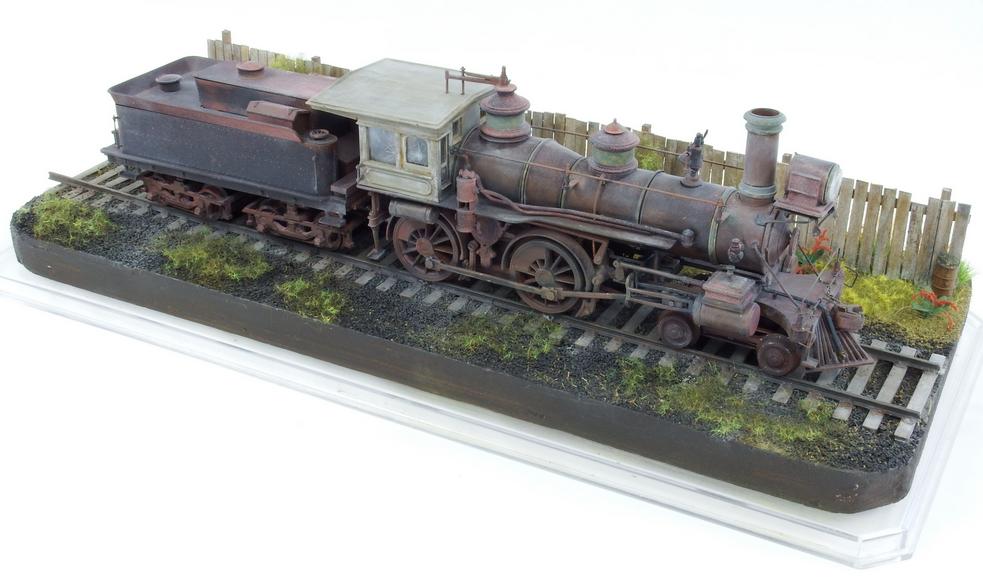 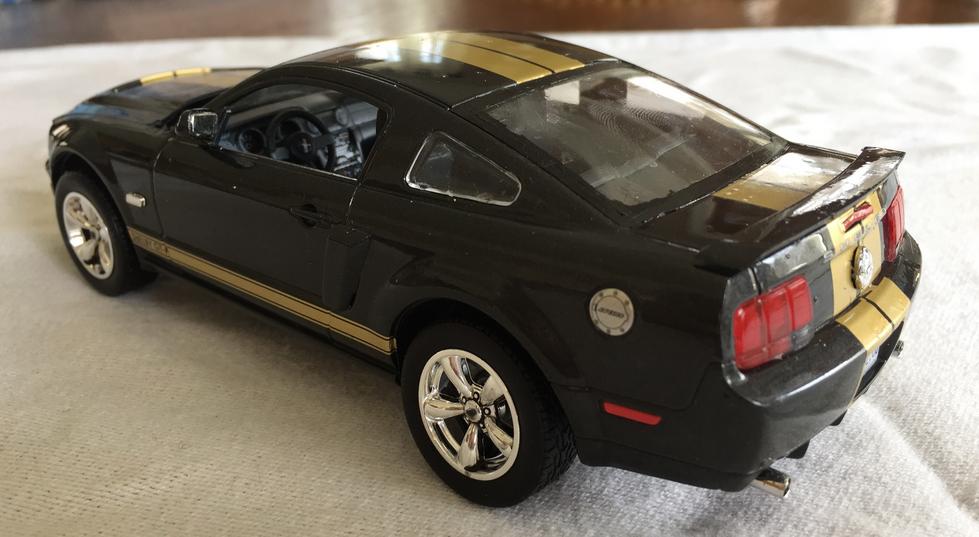 ​Al George presented his Rivarossi 1/48 4-4-0 American type steam locomotive that was built by Baldwin Locomotive Works in 1882.  It worked until the late 1970’s on the Virginia and Truckee Railroad until it was destroyed in a fire.  It was converted from wood to an oil burning locomotive in 1888.  There are many metal parts and many tiny, tiny, tiny screws.  Al says, no more!  I love it!!!​ 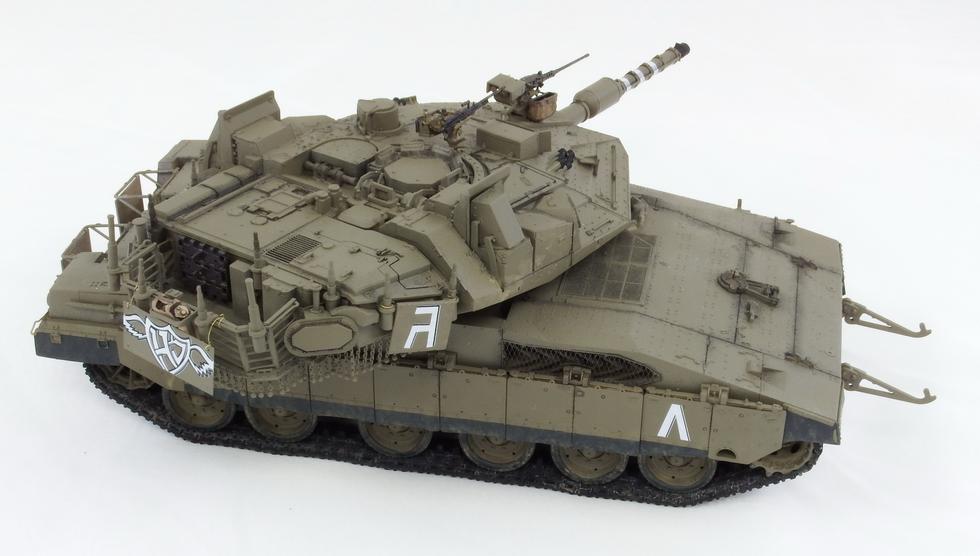 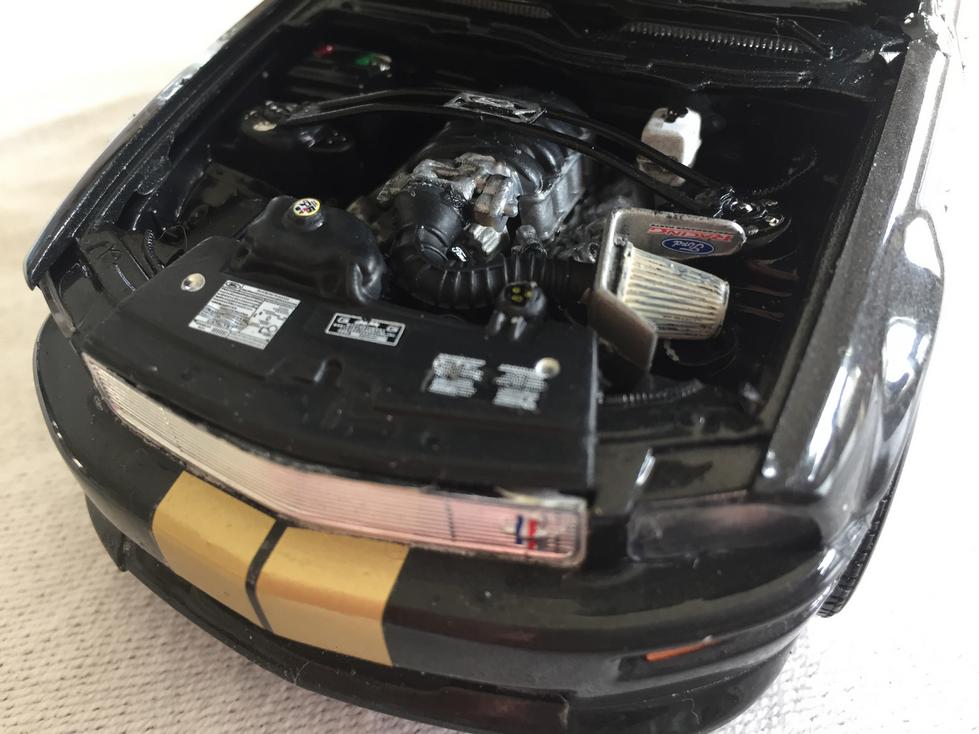 We start off with Adam Burns: This is a 2006 Ford Shelby gt-h
It’s one of the new Germany Revell kits I’ve built 4 of this kits and they fit good and the directions book is vary detailed nice kits 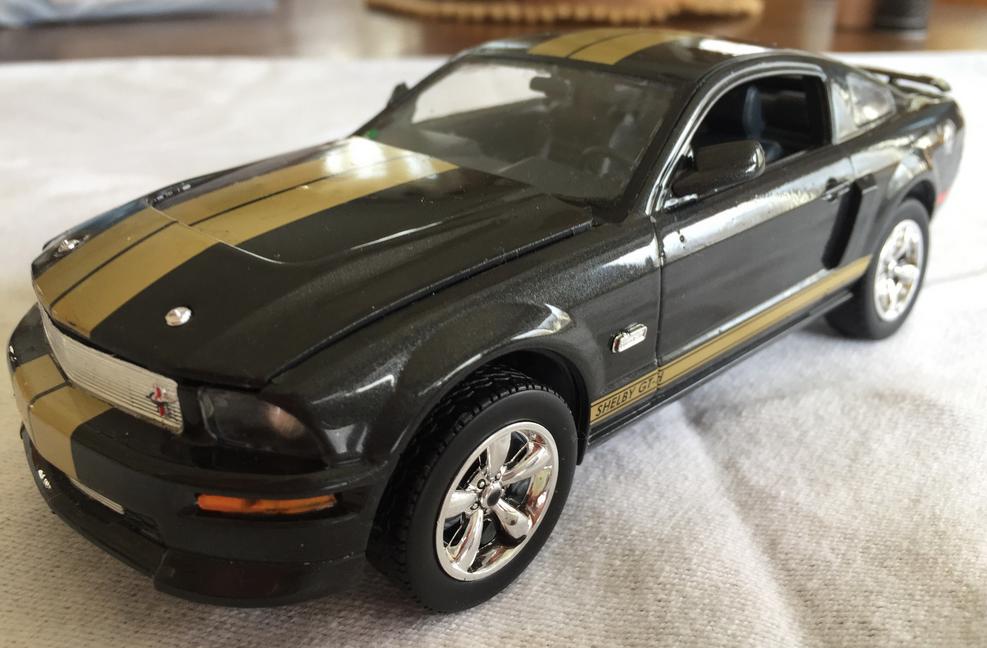 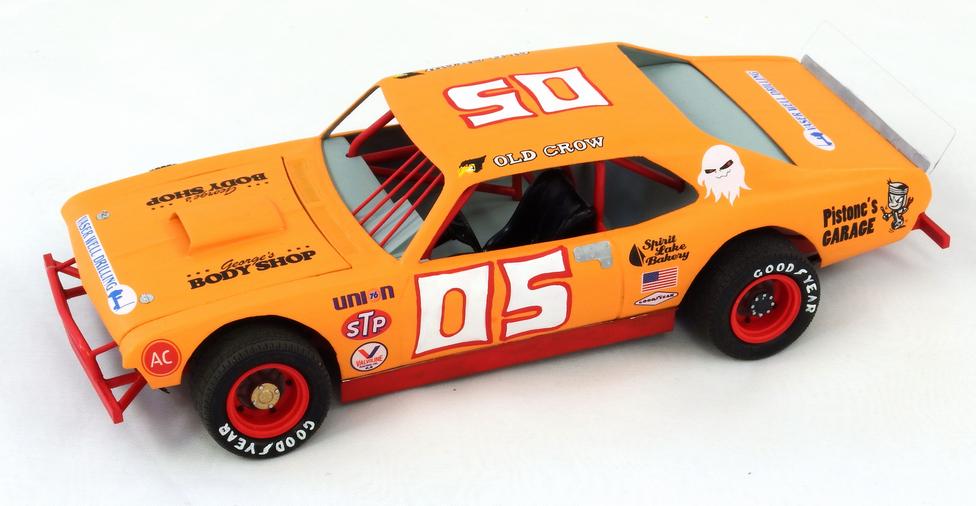 ​The President strikes again!  This is a 1972 AMT Chevy Nova Super Stocker and would have been seen racing in the mid 80’s.  Of course, he built the roll cage and chassis braces and the fuel cell and the 9” Ford rear end (?) and the dash and bumpers and rear clear spoiler and other racing parts.  Of course.  He used Testors flat red on the frame, a mix of Testors yellow and orange for the body followed by Dullcote, and the interior is in Testors flat international gray.  The decals are from his spares box and, of course, the numbers are hand painted.  Of course….  And of course, it is another spectacular model from JR!​

Alan Vandam proudly showed off the cookies he brought in….I mean his USMC M-7 Priest with the 105mm gun.  He brought this in last fall and decided we needed an encore presentation!  And we did!  He used two 1/48 Tamiya Sherman kits (no, he didn’t mess one up and had to start over, he needed to combine two kits!)  He used tons of conversion parts including PE.  Those Eduard M-50’s each had 13 parts!!!  Alan scratchbuilt the rear vents and all those shell tubes were made from styrene rod.  Great job, Alan!