Note: I’ve noticed a grayish “blob” on several of the model photos.  I’ve tested the camera and I don’t think it is a camera or lens issue so it must be some sort of weird light reflection or a 1/35 scale TRIAD ghost.  Will check this out later. 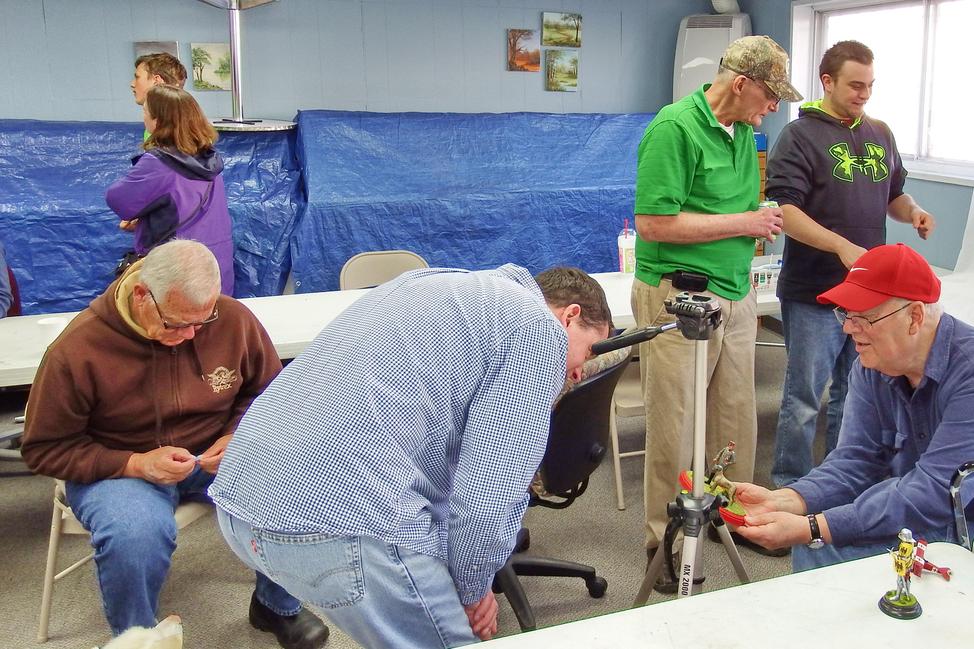 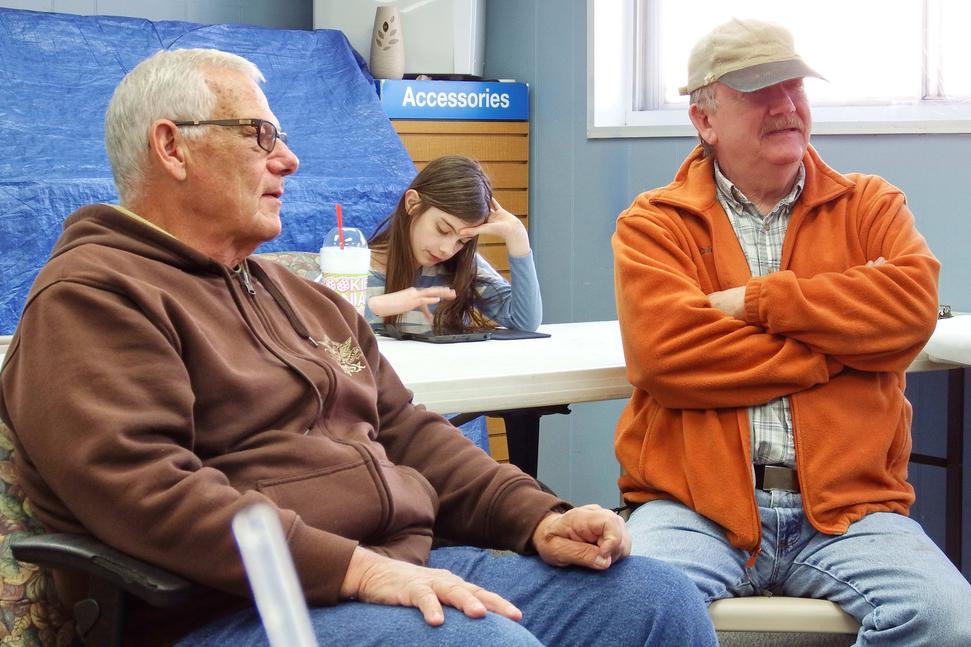 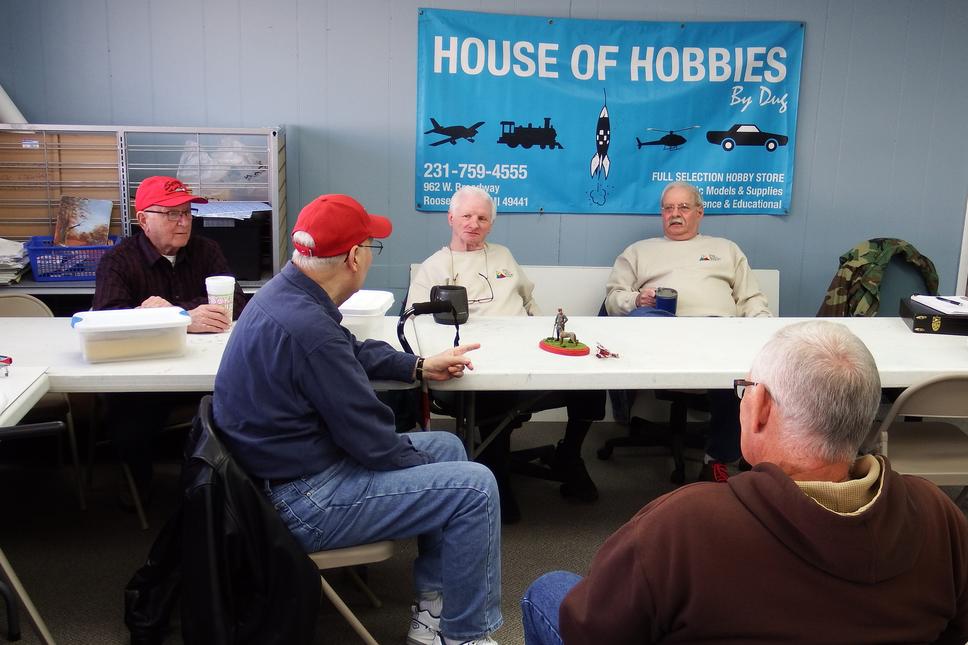 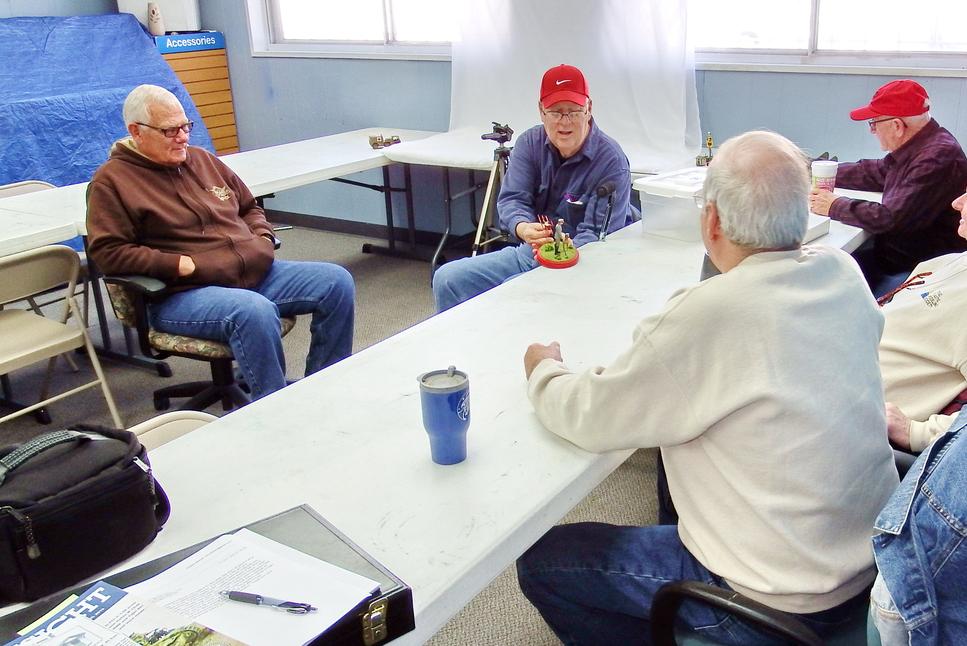 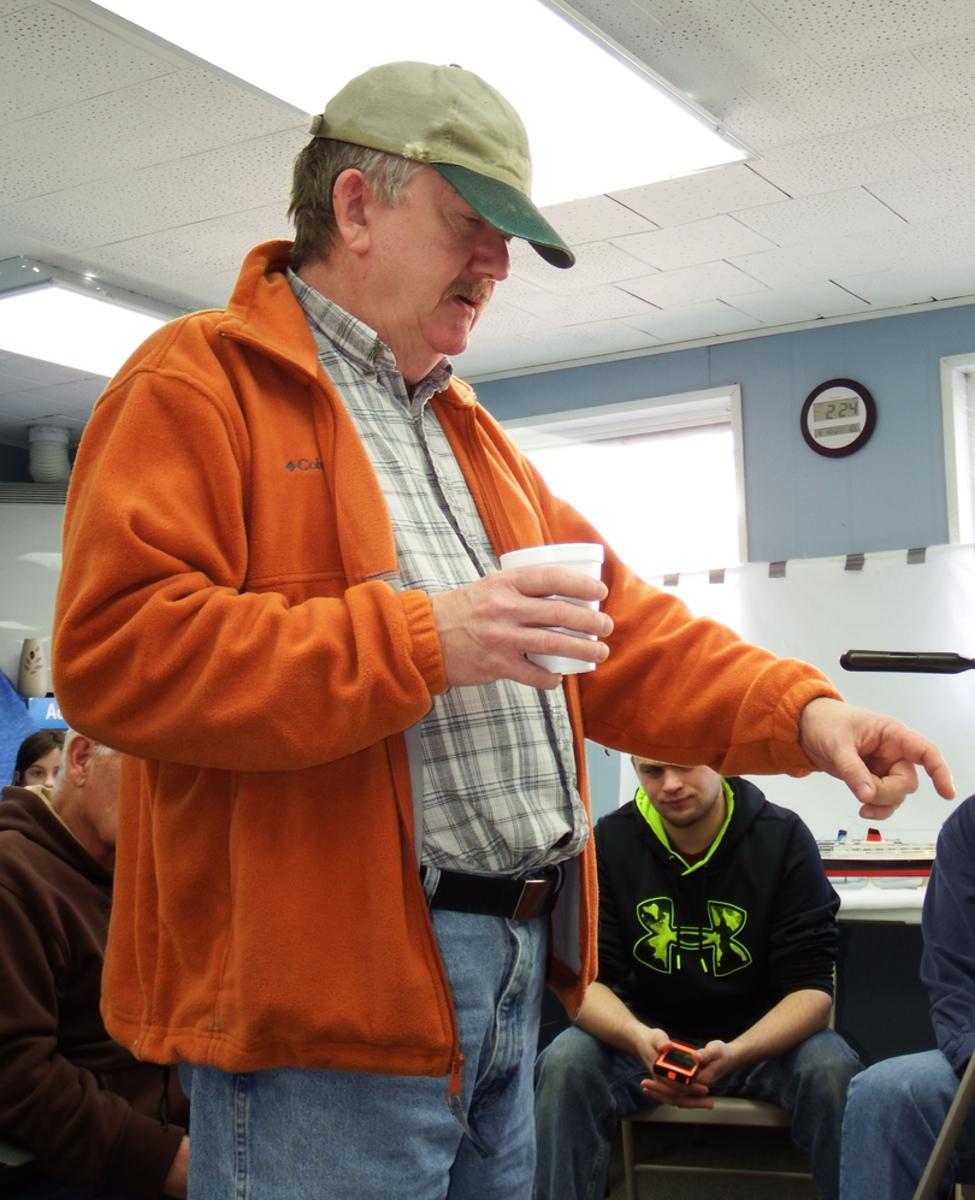 Here we have Jerry telling us about his pet goat. 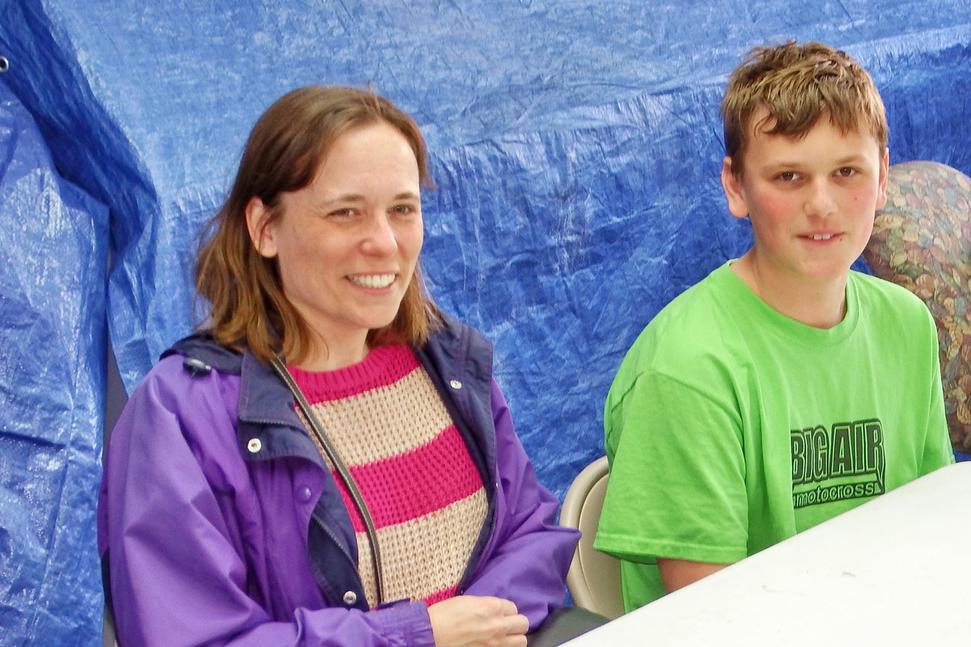 Matt was off motor crossing so Mom Janel hauled Spencer to the meeting.  Good to see her again.  She told me after the meeting she likes the history discussions but she’s not much into tanks.  Hey, nobody’s perfect!  Sorry the photo is fuzzy. 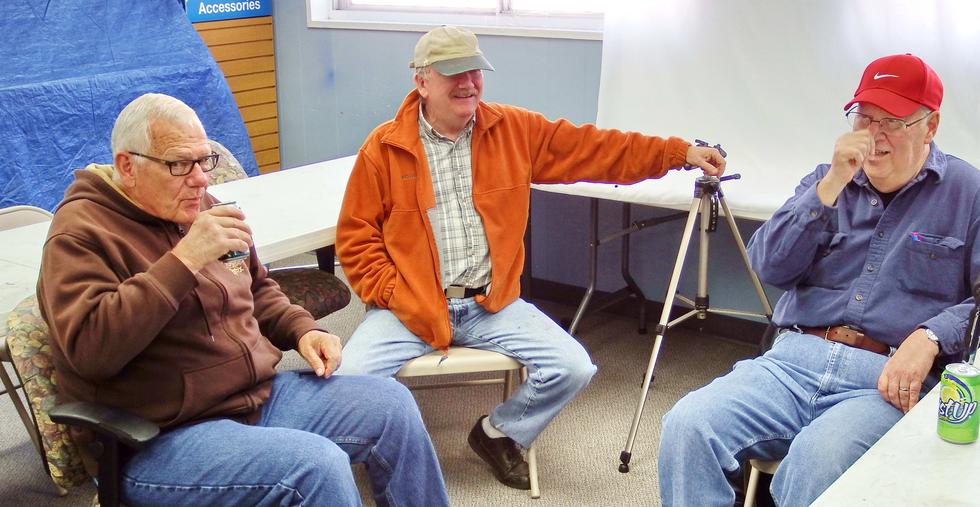 Let’s jump right into some group shots.  In this first one, Bob is NOT thumbing his nose at Jerry…he’s after a booger.  ;-) 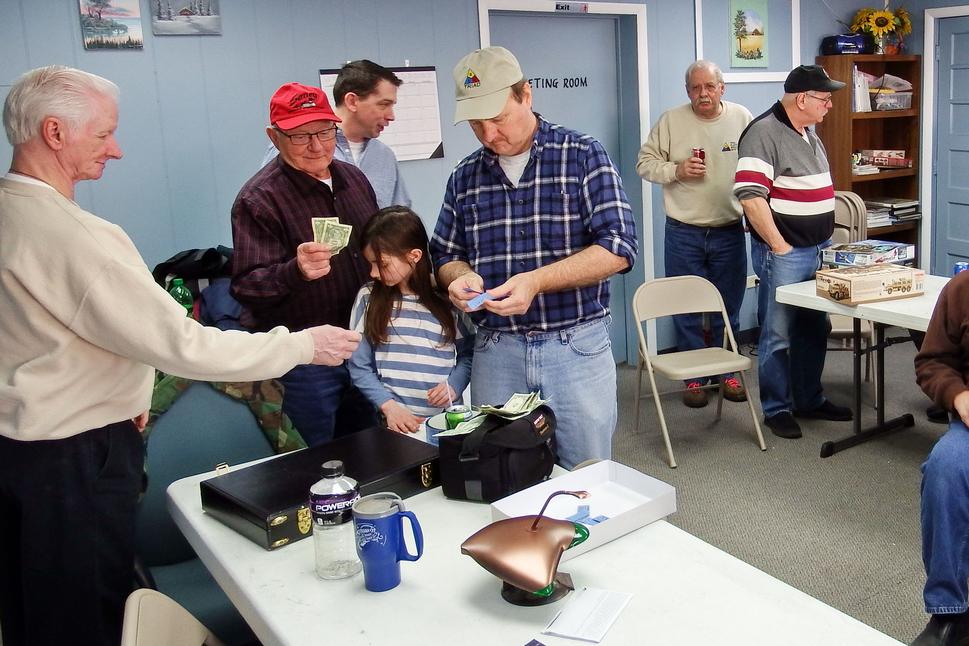 Rob Sheffer missed the photo “shoot” so you’ll have to look for his War of the World’s Martian spacecraft in the photo below.  This is a Pegasus kit and took about 15 minutes to build and install the lighting system…but it took much longer to paint this baby with a base of black and then Alclad II copper.  Really nice job, Rob. 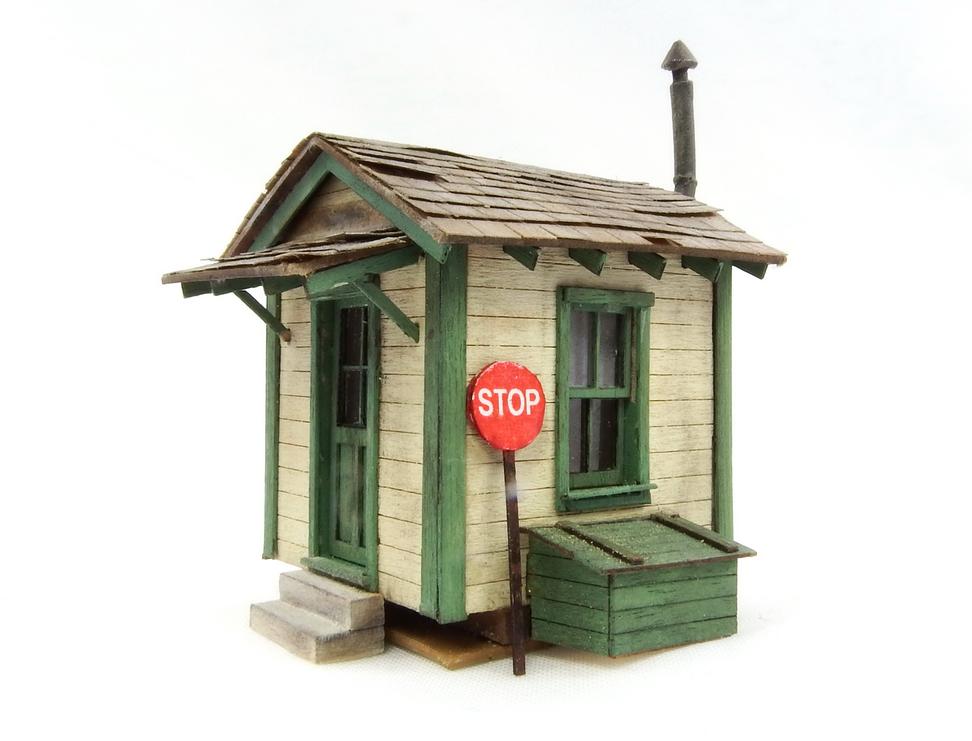 Al George, the guru of model railroad structures, has done it again with his B.T.S. HO scale railroad crossing shanty.  It is just beautiful and will eventually end up on the HoH HO scale layout.  And everything about it appears to be in the same scale…..  ;-)

Danny Sutton returned with not one ship model but two.  The one in front is the SS France as it appeared near the end of its life in 1974 and the ship in the back is the same ship retrofitted in 1979 as the SS Norway.  I have included a “daytime” shot and an “early evening” shot to show off Danny’s LED lighting systems.  Way cool! 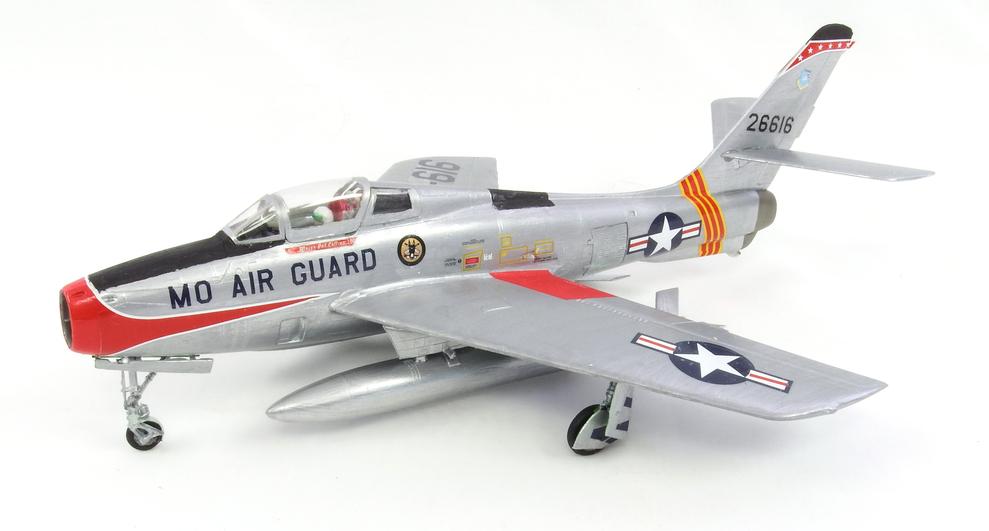 You saw it on the homepage…and here it is again.  Feller said it was a fun build but he had a problem with one of the Aero Master decals.  Well, that’s his opinion.  He painted this beauty with Model Master silver paint.  A great looking F-84F! 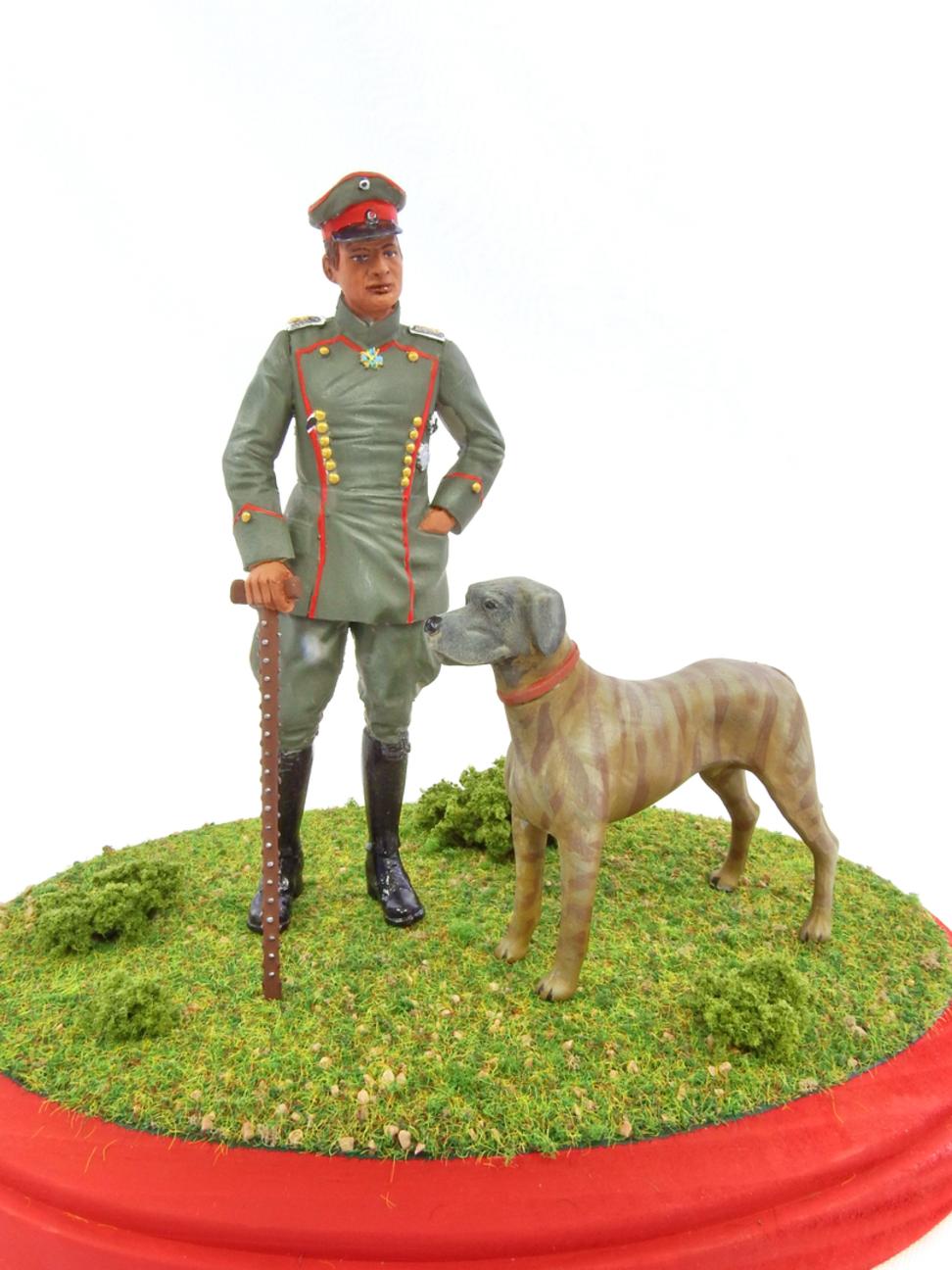 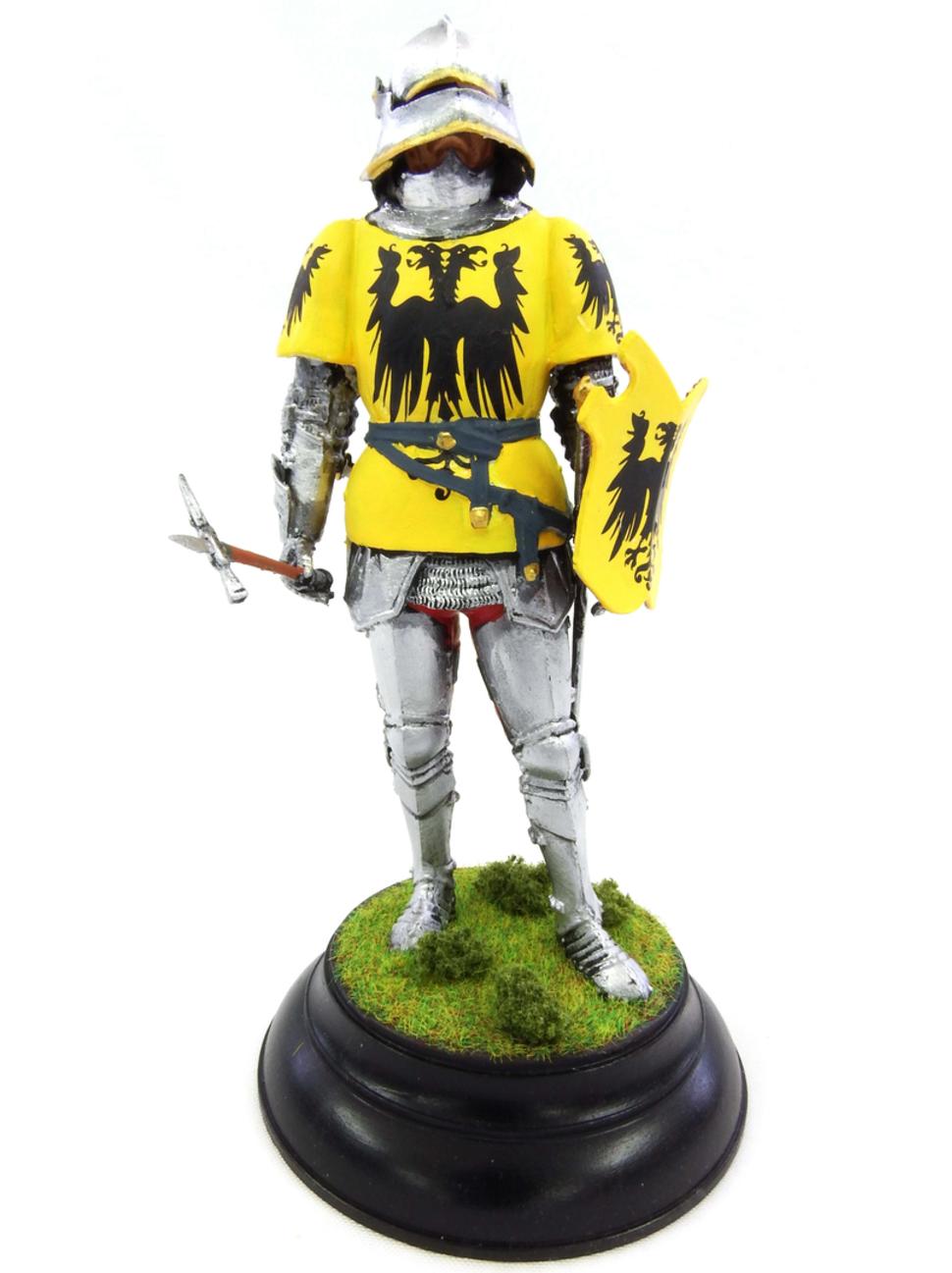 Bob Thompson showed off two large scale figures…his specialty.  First is a 15th century German knight from Mini-Art.  The kit was old and the bad fits gave Bob fits.  Bob needed a lot of carving and putty to bring this figure to life.  The next guy is the legendary Red Baron of WWI…along with his Great Dane Moritz.  This was another Mini-Art kit but was a much easier build.  Both figures were painted with Vallejo Acrylic.  Nice job, Bob! 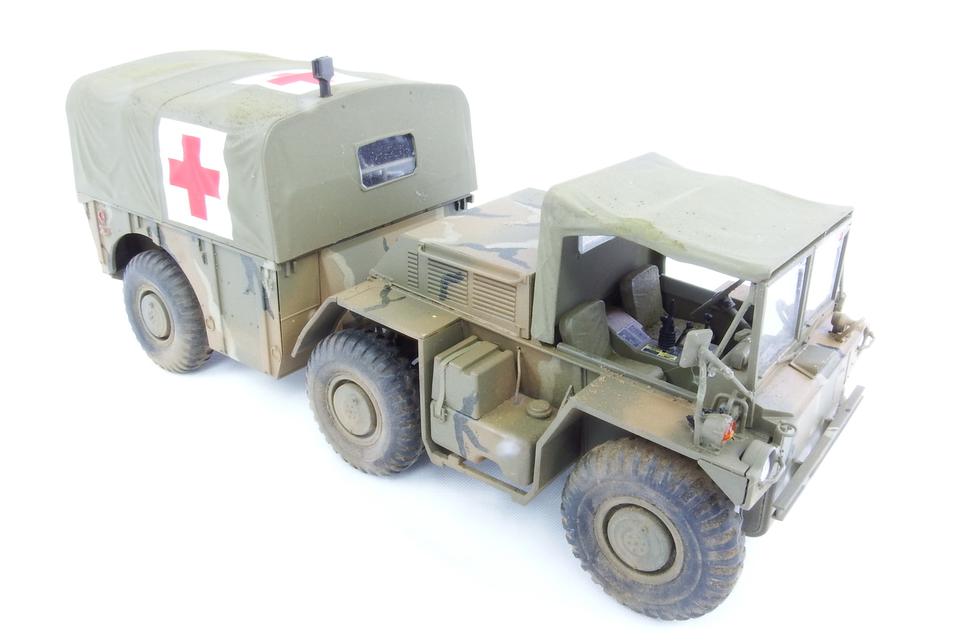 Big Daddy Jerry Bridenstein brought in his just completed Tamiya M792 1/35 Gama Goat ambulance.  The trailer even had its own space heater.  The vehicle had a 3 cylinder diesel engine which was…well…not stealthy.  The goat was used in Vietnam, Korea, Germany and other places.  Apparently, the vehicle was not well liked…except for Jerry’s model…it was very well liked! 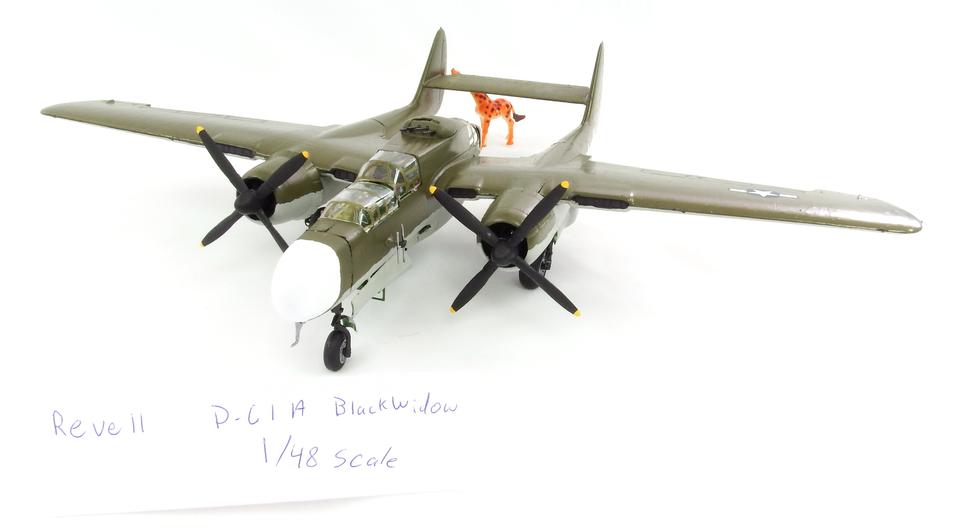 Seventeen members were in rare form.  I’ve never seen so many insults flying around!  Al was insulting Feller.  The President was insulting his VP.  And, of course, everybody was insulting Bob!  A good time was had by all!
Dave Martin was AWOL but he dropped off his handsome Revell/Monogram 1/48 P-61 Black Widow…in olive drab.  Dave’s plane was flown by the 422 Squadron of the 9th Air Force in England well after D-Day.  This plane was normally painted black when flown in the Pacific theater of war.  OK…you’ve probably spotted the giraffe.  Dave forgot to put weight in the nose so the model is tail heavy…so he is using the toy giraffe to prop up the tail.  Well, that’s different…but it works!  ;-)  Thanks, Dave!