Long lost Robert Jackson reappeared and was trying his best to deceive us with his WIP Trojan Horse.  The horse was purchased at Hobby Lobby and Robert will add wheels and boards to the horse.  I think the guy on top better keep their head down!  Thanks, Robert!

It must be because he’s retired, but Big Daddy Jerry Bridenstein is building some amazing models lately.  Take a look at this MENG WWI British Whippet tank.  Check out that weathering and the shine on those tracks.  I love this thing!  Thanks, Jerry! 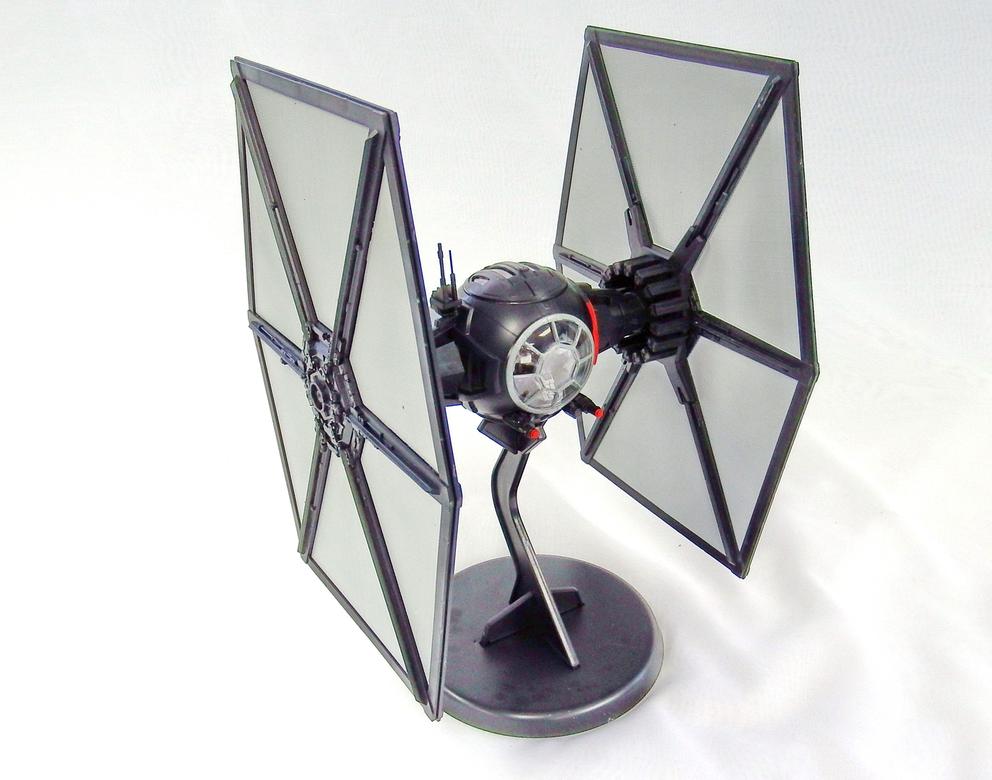 See ya at the May S&T…in three weeks!
PS…several photos have a white blur in the middle of the photo.  I tried some quick photo editing with very limited success.  I later determined the problem was a small speck of dust on the lens.

We it comes to rusted, worn, dirty, broken down stuff…we turn to Al George.  I guess he calls upon his own life experiences for inspiration!  ;-)  This 1/25 Revell 1941 Chevy pickup is a testament to Al’s talent.  He used Lifecolor rust and dust, earth pigment paint, Floquil dust, and some graphite. The base is covered with a mixture of groundcover from Woodland Scenics and his Ho Made Products.  See Al for pricing…  ;-)  Awesome as usual, Al! 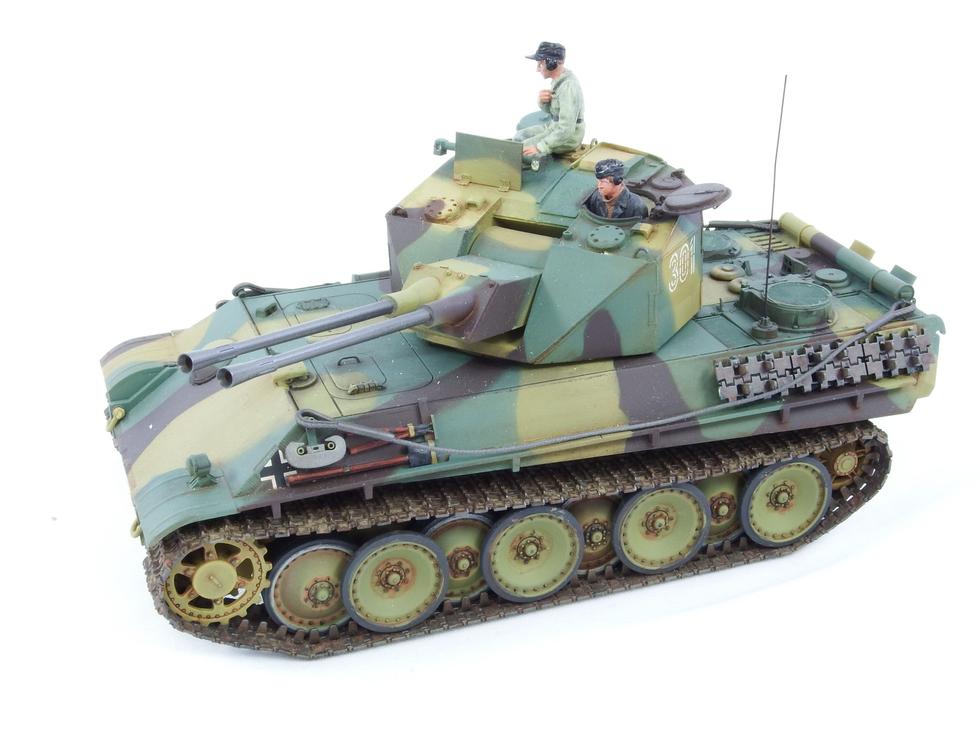 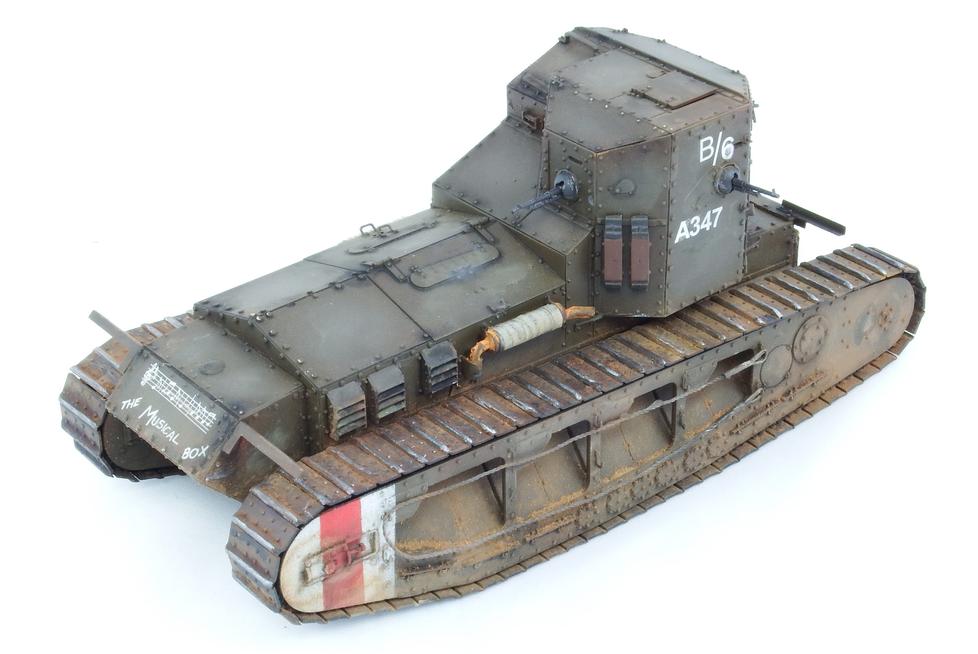 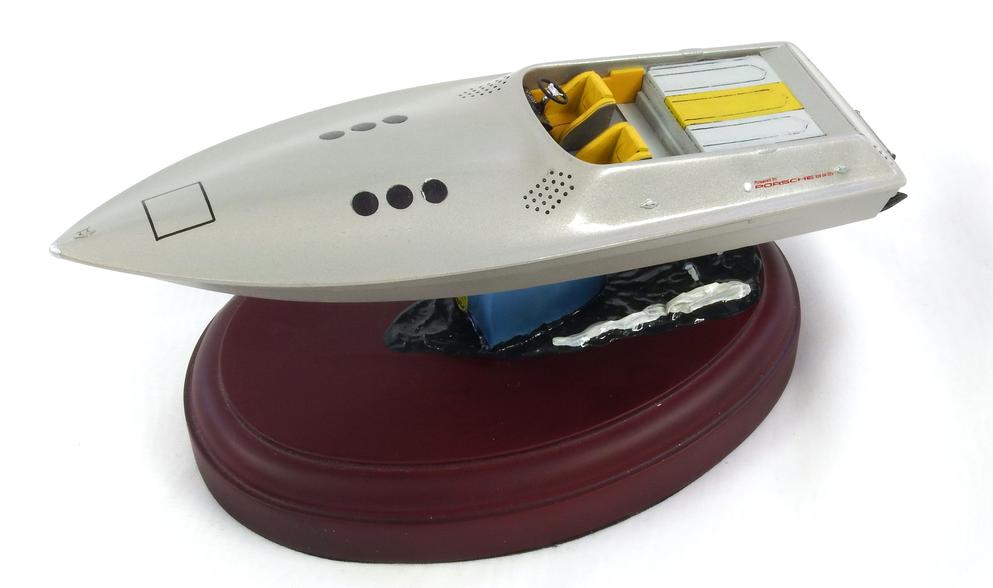 Doug Schuur brought in the second F-84...this was an old Monogram kit that he built awhile back.  He painted it with Testors Chrome Silver paint…probably took this long to dry….  His second model was an AMT ’66 Impala that he built for a customer…who never showed up to claim it…or pay for it.  He even wired the engine!  Nice job on both, Doug! 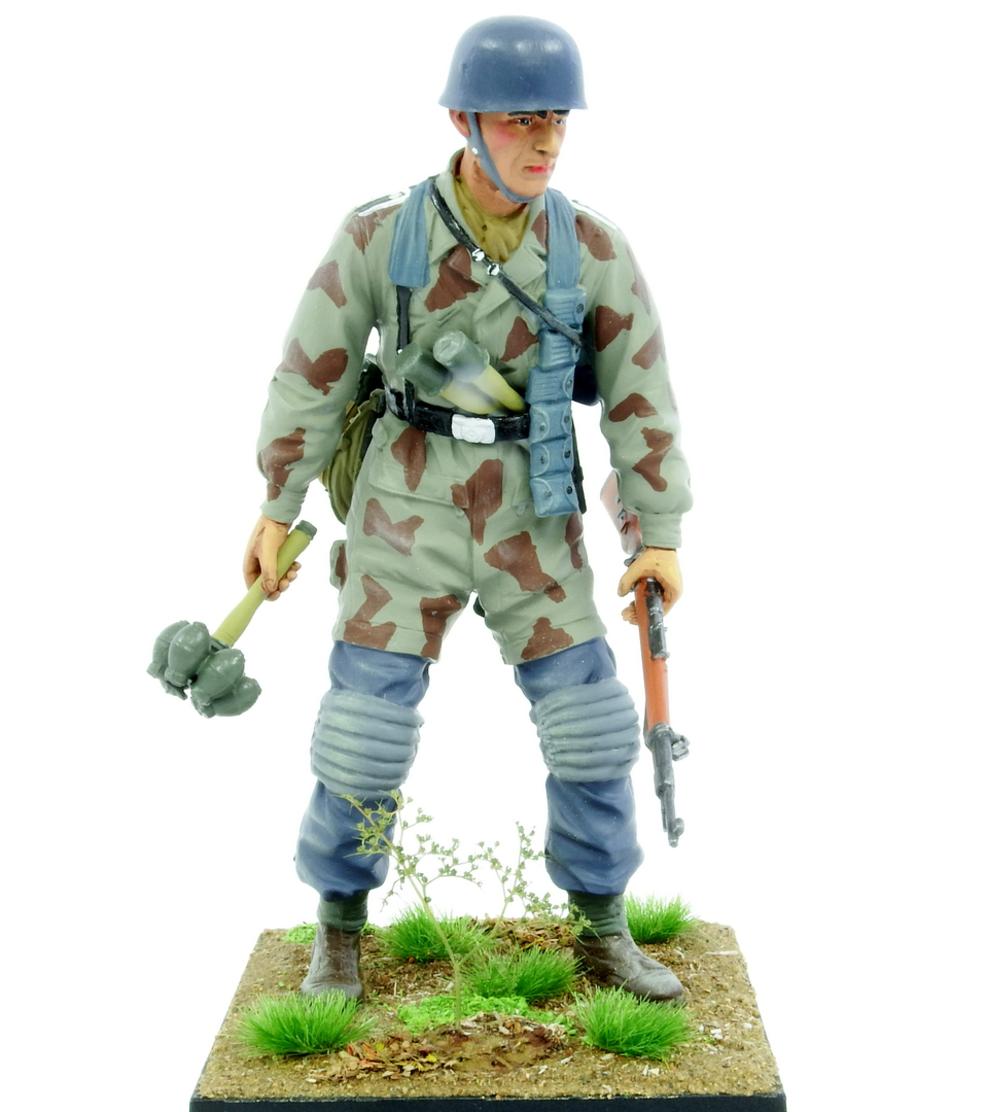 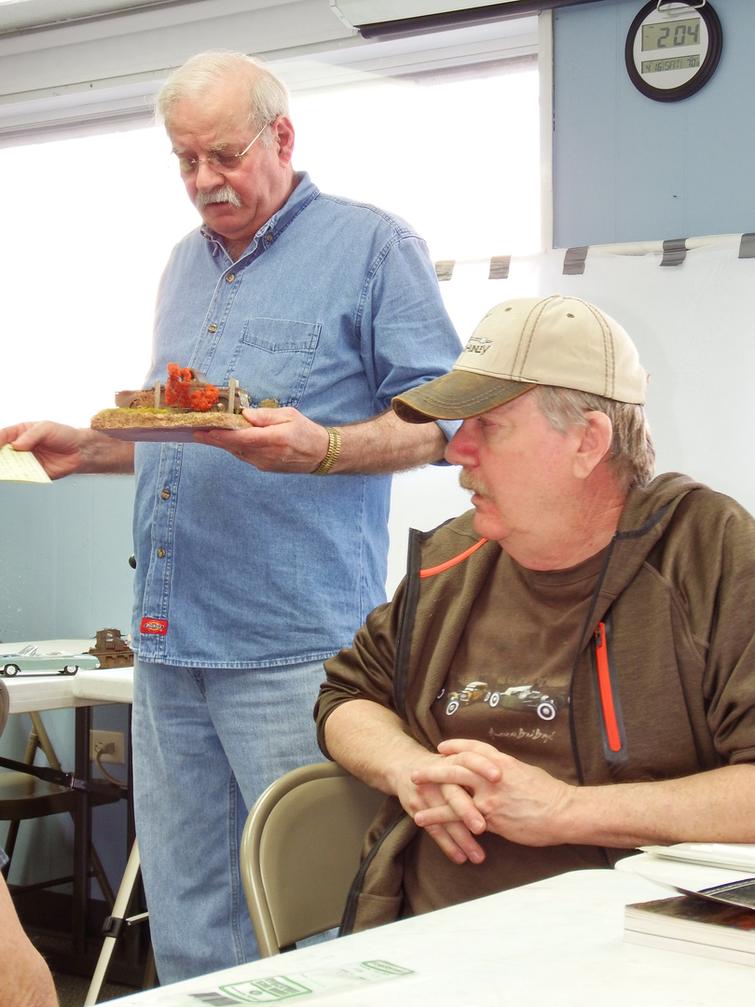 Eric “working full time” Gemzer lowered himself to model an ’85 Chevy Camaro Z28 (He’s a Ford guy.)  He built this stock.  I don’t think any wheels fell off until after the meeting.  He’s making progress!  ;-) 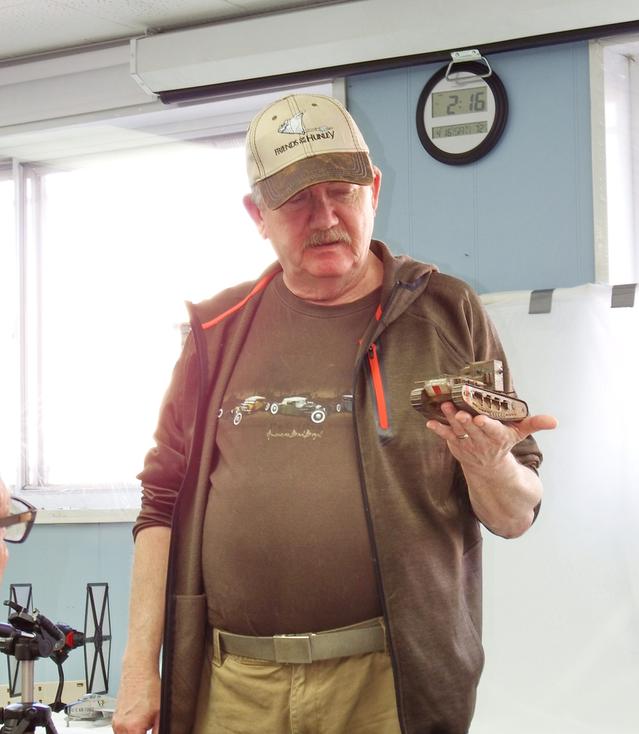 Mark Jahsan brought in four 1/48 military support vehicles.  He also brought in a ton of Dan’s Evergreen plastic which was passed around.  Yes, I took more than my fair share.  I was greedy…and proud of it!  ;-)  Starting at the bottom left, we have the Monogram Celtrack tow vehicle, kitbashed tanker combing a Hiro tanker and a Renwal 1934 cab, Tamiya 6X6 CCKW 2-1/2 ton truck, and an Ace GA2-M415 Russian pickup truck.  Great job as always, Mark!

Alan Vandam displayed four beautiful models.  Unfortunately, he didn’t provide me with a write-up so the best I could do was catch about every fifth word!  The tank is a special German Panther, only three were made, and the later version had twin 57 mm guns.  The boat, believe it or not, was built by Porsche…and again…only three were built!  They were built in 1980 and used two 928 Porsche engines.  I guess you can purchase one in Florida for $300,000+.  The planes…one is a German Bf-109…the other one is a mystery…couldn’t write fast enough to keep up!  ;-)  Both are magnificent.  Man, I don’t want to go to a model contest and compete against this guy!

Mark Beck comes strolling in late.  Who does he think he is?  Bill Leger???  ;-)  Mark showed off his Snap-Tite Tie Fighter.  Mark actually had to use some Tenax.  I got the impression it was a new experience for him!!  ;-)

Feller Dewitt brought in the first of two 1/48 F-84’s.  Feller said this Italeri kit was a nice.  Decals were from Super Scale international.  He added nose weight to keep this puppy off its tail.  As usual, it was brush painted with Model Master paint.  Sweet!! 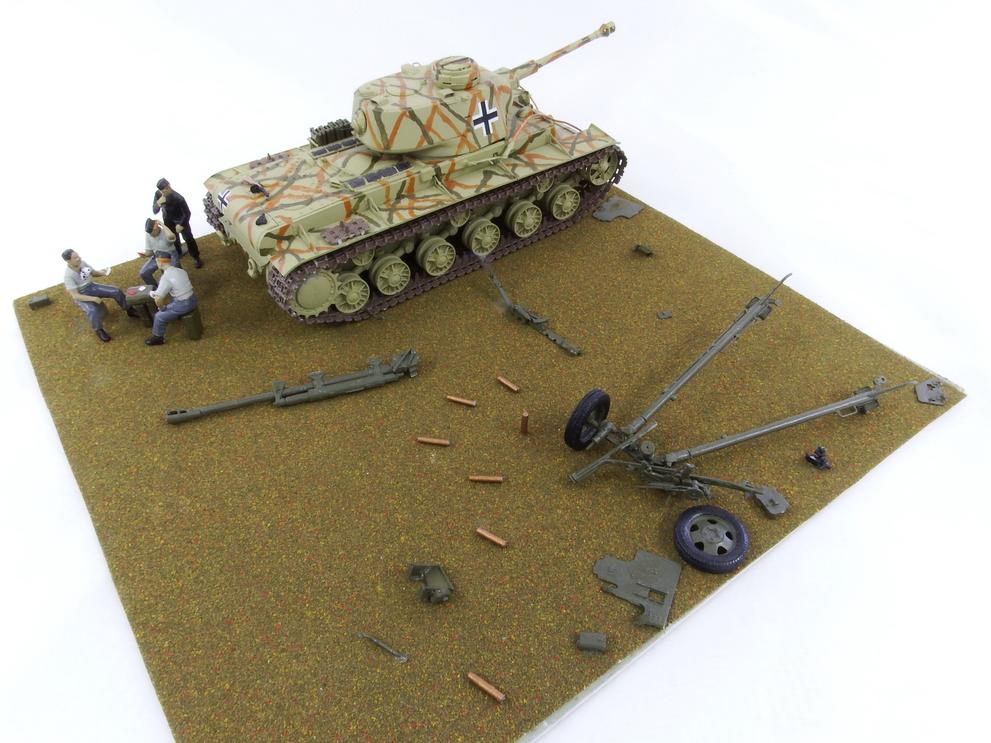 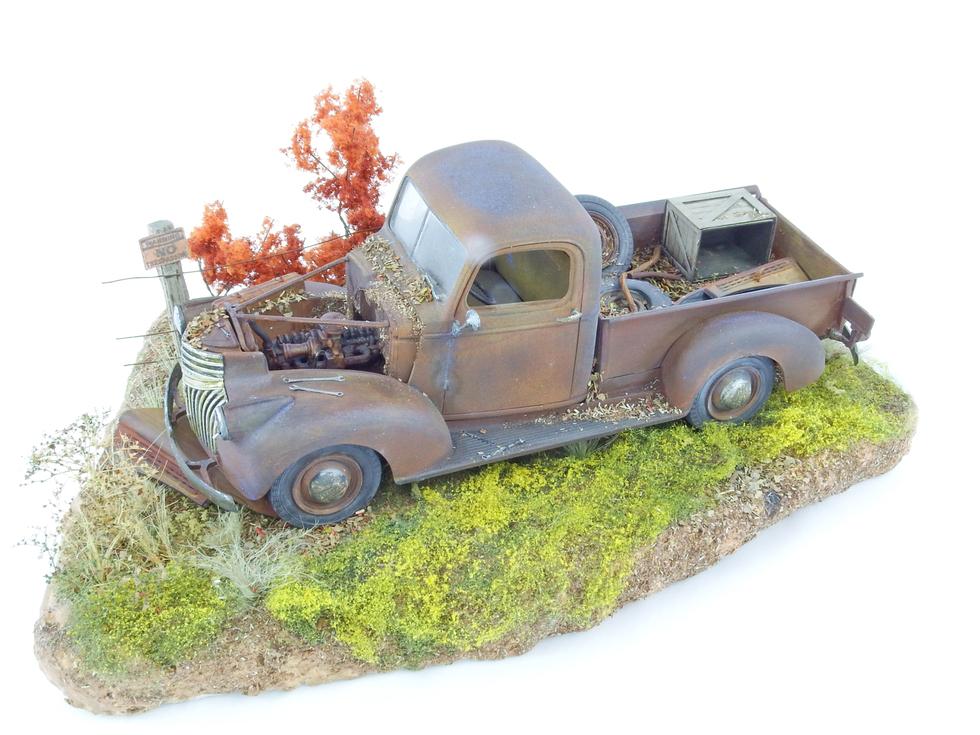 We’ll wrap up with three photos.  In the first photo, Jerry is saying, “Pick a hand”.  I don’t think I want to know what you would have won if you picked correctly! 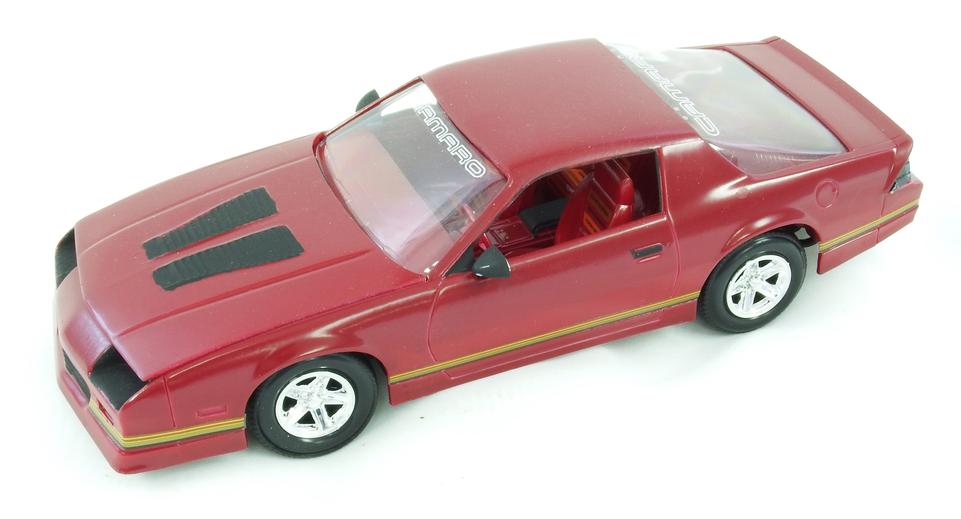 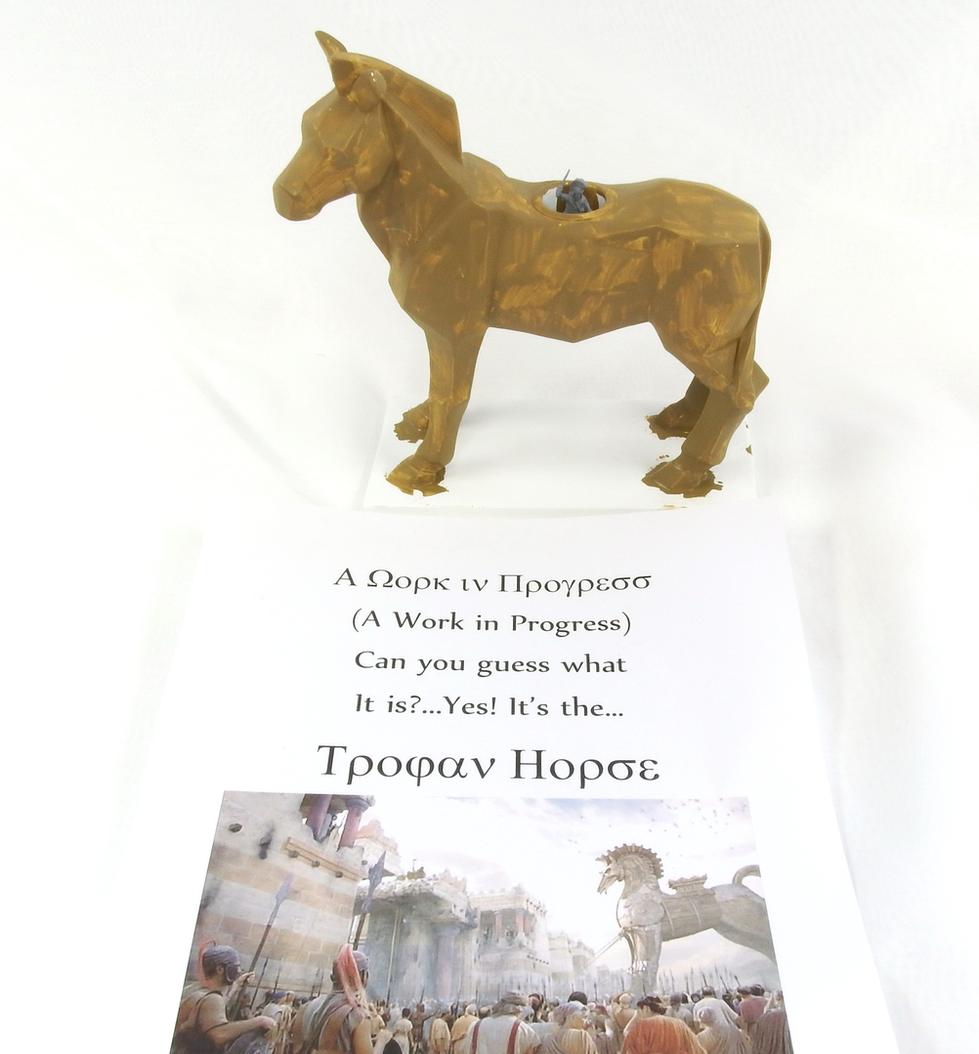 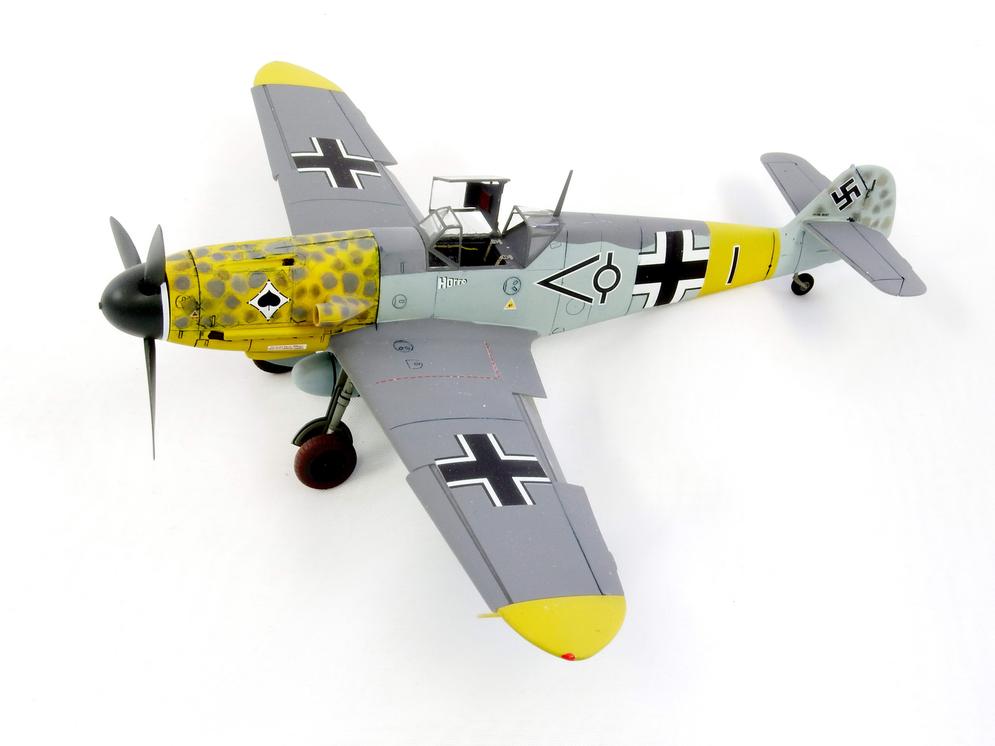 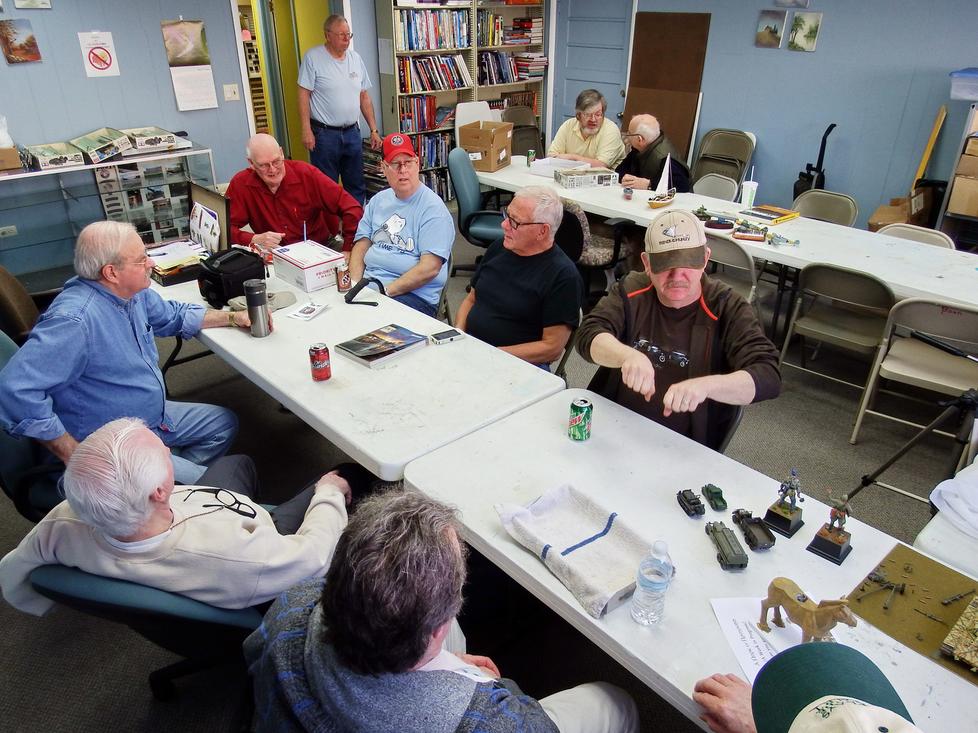 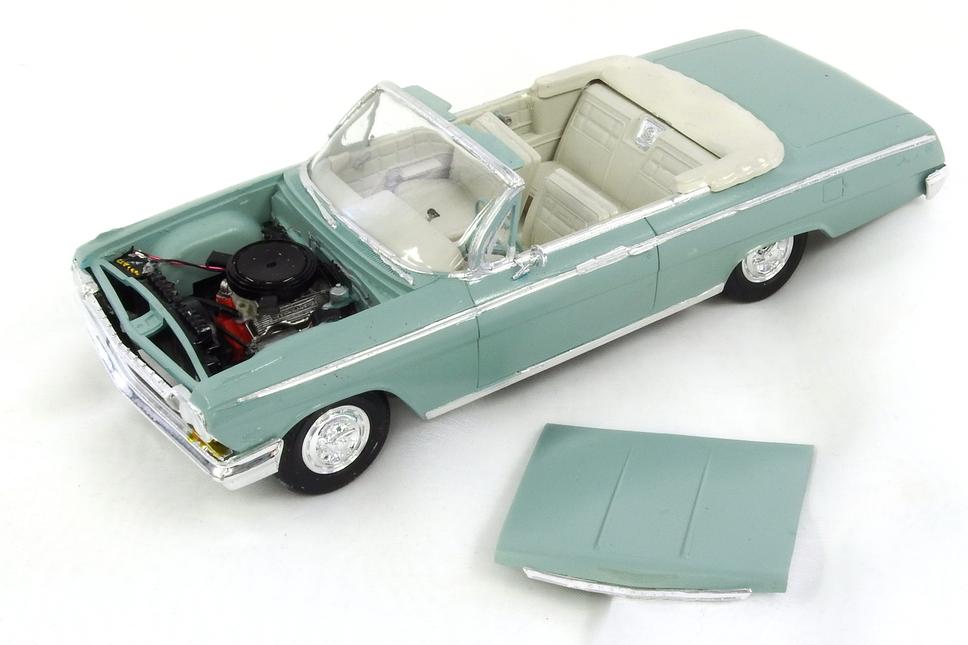 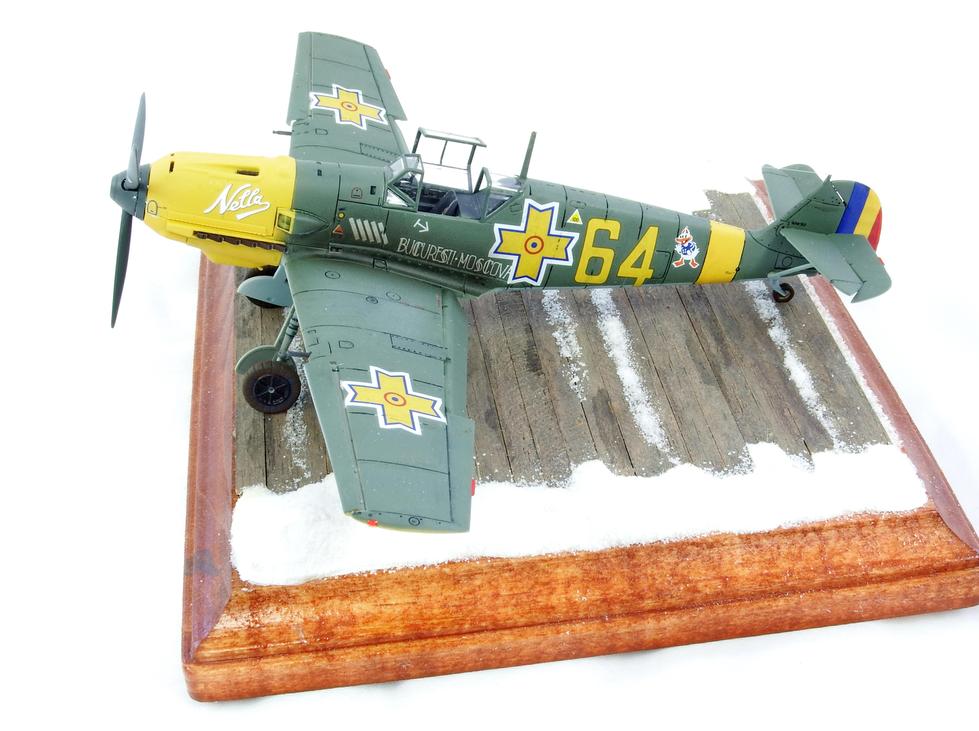 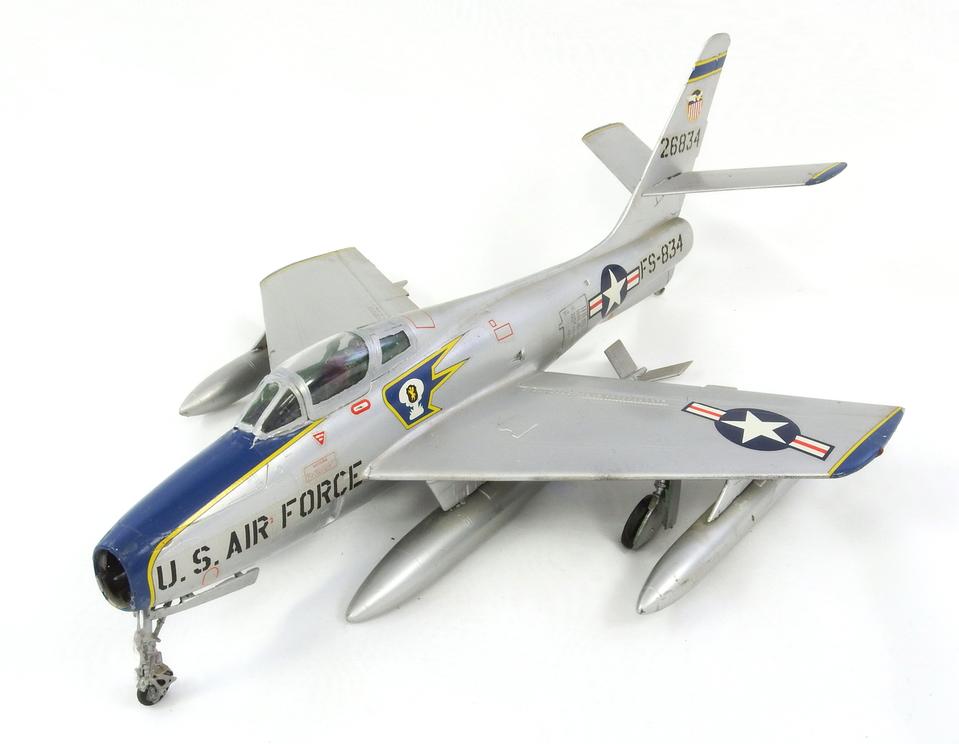 Bob Thompson showed off two beautifully executed 1/16 Tamiya figures.  First up is a Russian field commander.  Very impressive job, Bob!  Second is a German paratrooper.  His potato masher has extra grenades attached.  I hope we stop this guy before he does a lot of damage!  I guess the foliage, or part of it at least, was created by Al George.  The figures were painted with Vallejo.  Keep up the good work Bob! 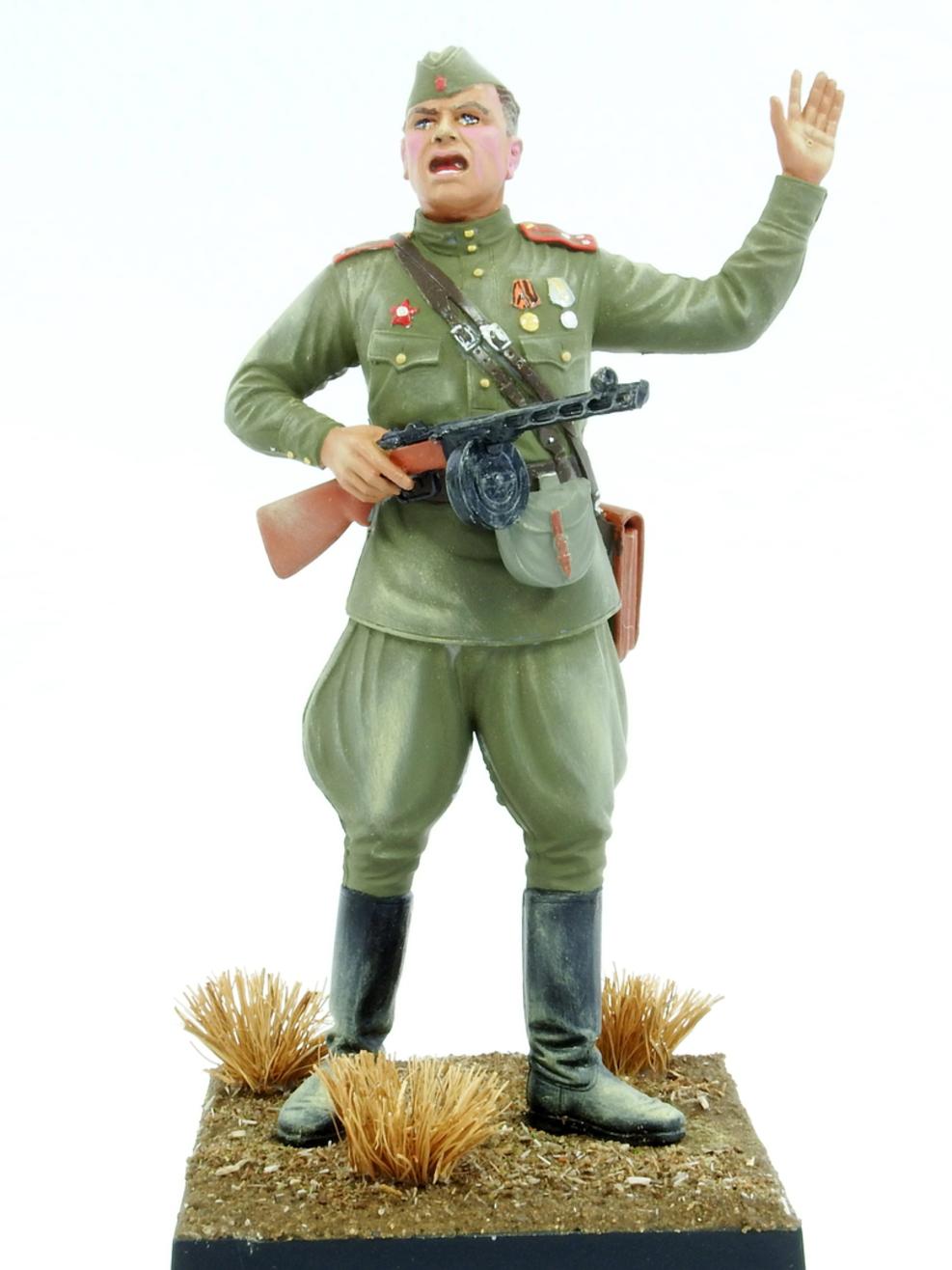 Francisco’s second boat model was started by his 7-year-old granddaughter who was visiting from Switzerland.  She started the first seven planks and he finished it.  Great fun for both!  He finished it this morning and he will send it to her soon.  Good stuff!

Dave Martin was at work but he dropped off his captured KV-1 which we have seen before…but he has added several figures at the rear of the vehicle.  Dave says this is still a WIP.  The tank is a Trumpeter kit.  Nice job, Dave!  See the Dalmatian in the shirt on the guy on the left?