Danny Sutton is the kind of guy who just lights up a room.  Oh wait…it’s his SS United States that lights up the room!  This ship still holds the speed record at 36 knots/43 mph.  That is quick!  Danny used Model Master rattle cans and he used tons of LED’s and fiber optics to light this puppy up.  He utilized sold brass screws (props) and PE from Gold Metal Models.  It took Danny six months to build…and I suspect most of that time was spent drilling out all those portholes!!  Very nice, Danny!  I think this photo enables you to see some of the lighting effects and I "removed" the wires. 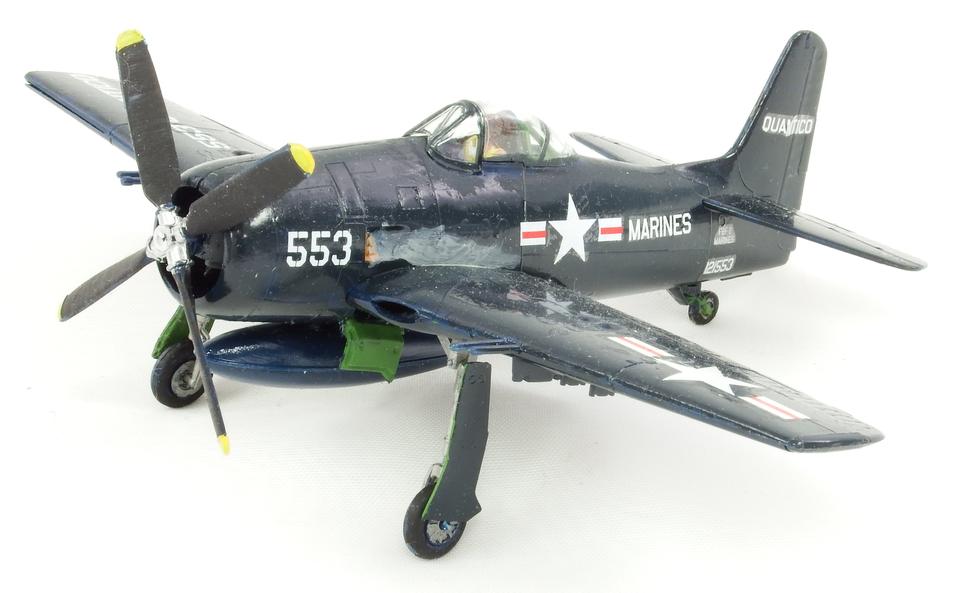 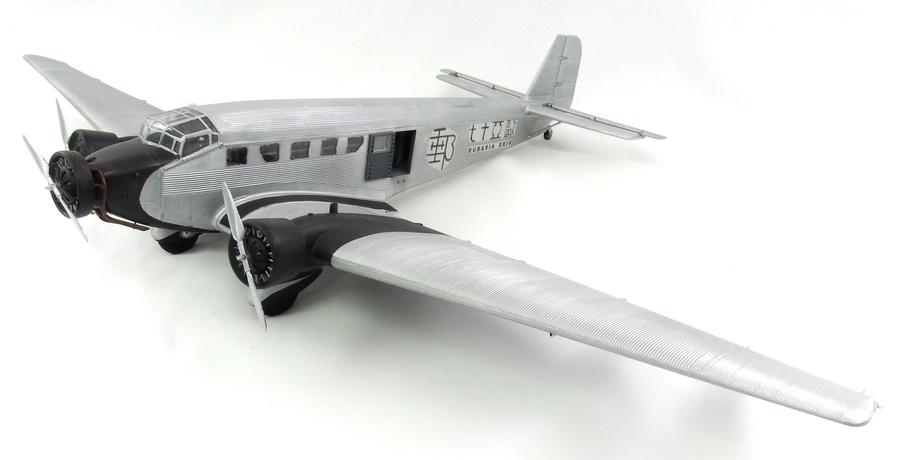 Mark Jahsan brought in one of my favorite planes, the Junkers JU-52. These planes were used by the Eurasia Airlines in partnership with Lufthansa and the Chinese.  This particular plane was destroyed on the ground by the Japanese…who apparently forgot that Germany was on their side!  And check out the photo of the progress Mark is making on his flying wing!

Well, we got through the meeting.  We miss our Danny boy.

We all know that member Rob Sheffer lives in a fantasy world…and here’s the proof!  He has done a magnificent job on this 1/48 Bandai Star Wars AT-ST chicken walker.  Rob said the kit was great.  He used Alclad II and Tamiya acrylics, scratchbuilt the catapult from twigs, and made the Ewok from Sculpey.  First class, Rob! 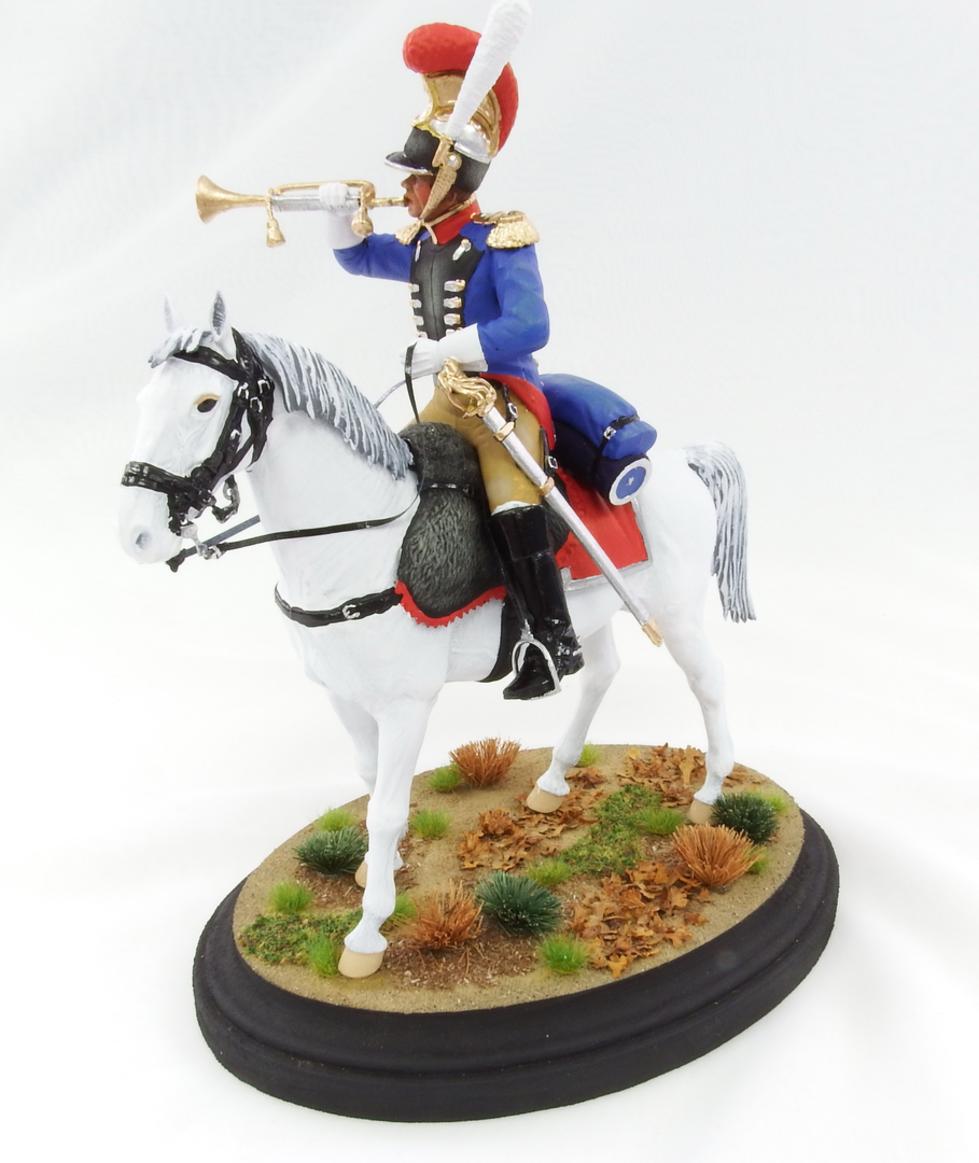 Boy, what a great modeler Alan Vandam is.  Wow.  Check out this Bf-110 G-2 from Revell/Monogram.  Both models used Moskit metal exhaust stacks…but now they are out of business.  What a great looking model!  The second model is of the HS-129B-3 which started life as Hasegawa special kit.  The problem was the resin gun bay kit.  Alan could find no glue which would bond the parts.  Very frustrating!  Well, I’m glad it stayed together long enough for us to enjoy this baby! 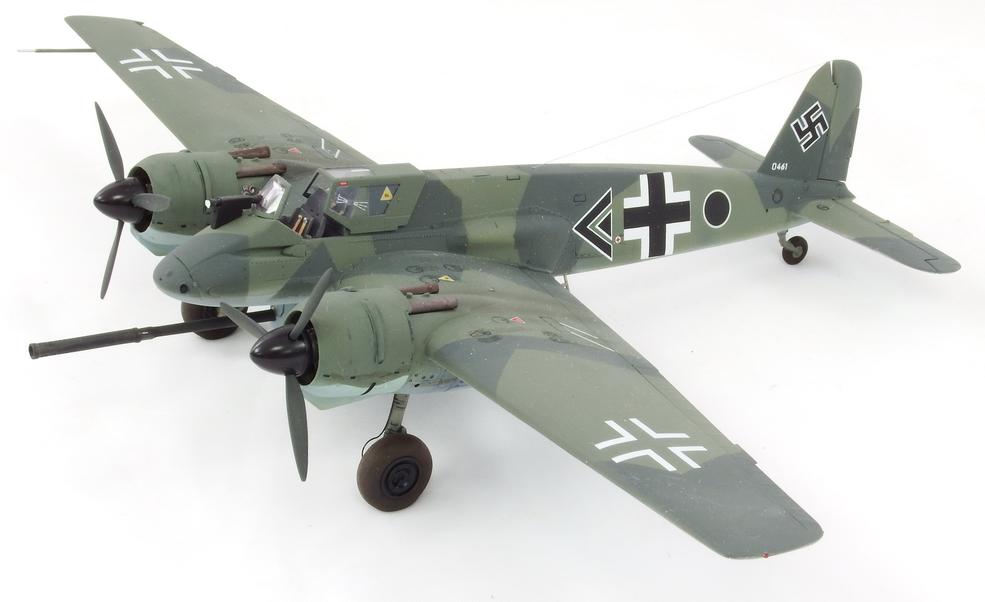 Feller Dewitt was no fun today.  He built this Monogram 1/72 F-8F Bearcat in seven hours in one evening.  It had 20 parts and the 1967 instructions posed no problems.  He brush painted it with Model Master paint.  Yeah, the model looks great…but where is the excitement, the drama, the humor!!!  Come on, Feller!!  ;-) 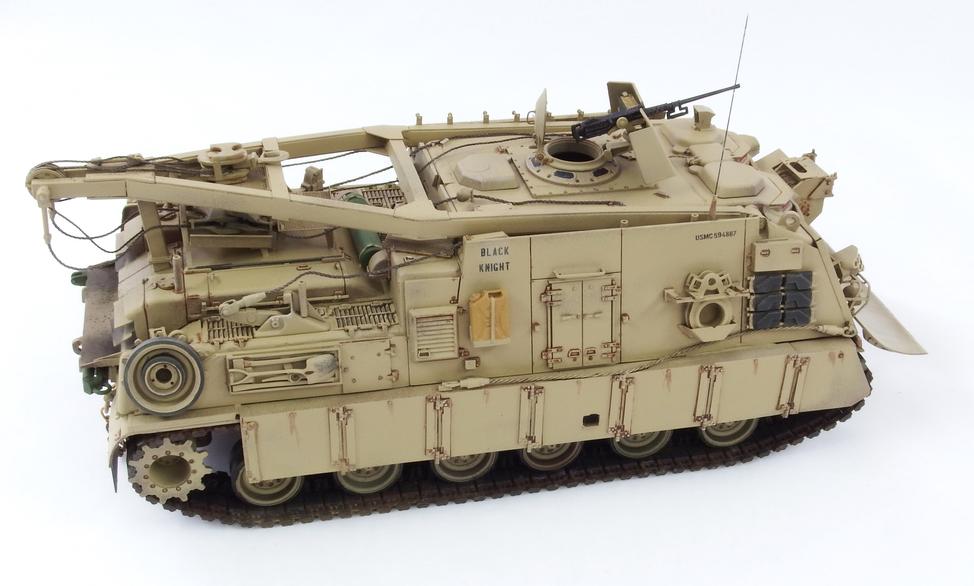 Bob Thompson proudly presented two 1/16 figures.  The first is a Dragon kit and shows a German Feldgendarme holding a weapon and a lollipop.  Nobody will be stealing his candy!  Wait, Bob says that is not a sucker, it is a traffic sign.  Well, then…I guess nobody will be running his stop sign!  Bob made the bricks look wet to go with his raincoat.  Great job on the eyes, Bob!  Sweet!  Next we have a Napoleonic trumpeter on horseback by Mini-Art.  Bob followed historical records and modified the paint scheme using Vallejo paints.  Great job, Bob!  Nice to see you working in large scales again!

When it comes to modeling stuff that looks worn out and tired, nobody does it better than Al George.  I wonder why that is?  I guess at his age, he’s had a lot of life experiences….  ;-)  Take a  look at what I mean…Al took a 1/25 diecast 1948 Ford F-1 pickup and “painted” it with paint pigments.  It is an involved process using these pigments and Dullcote.  He also used Lifecolor paints…rust and wood.  Well, you certainly can’t argue with the end result!  I have also included his old barn.  And you should have seen his old rusty engine!  Fantastic!

Hope to see all of you at Dan's visitation tomorrow, 3/6.  We owe it to our Superhero.

It feels like somebody ripped the heart out of TRIAD.  Dan was the man.
Let’s start off, in random order, with Tom Miller.  Now, I’m not much of a modern armor guy but Tom’s great models are changing my mind.  This stuff is way cool!  First up is his AFV Club M88A2 Hercules with the Legend conversion.  This is a U.S. armored recovery vehicle.  Man is that sharp!  He used Model Master paints, acrylics and Mig wash/pigments.  Tom said, “It was a lot of work!”  Next is the Kinetic U.S. RG-31 with mine roller.  He added the Legend mine roller and DEF wheel set.  Tom says this was a nice kit.  Note the nicely done tinted windows.  Great job, Tom, and always good to see ya! 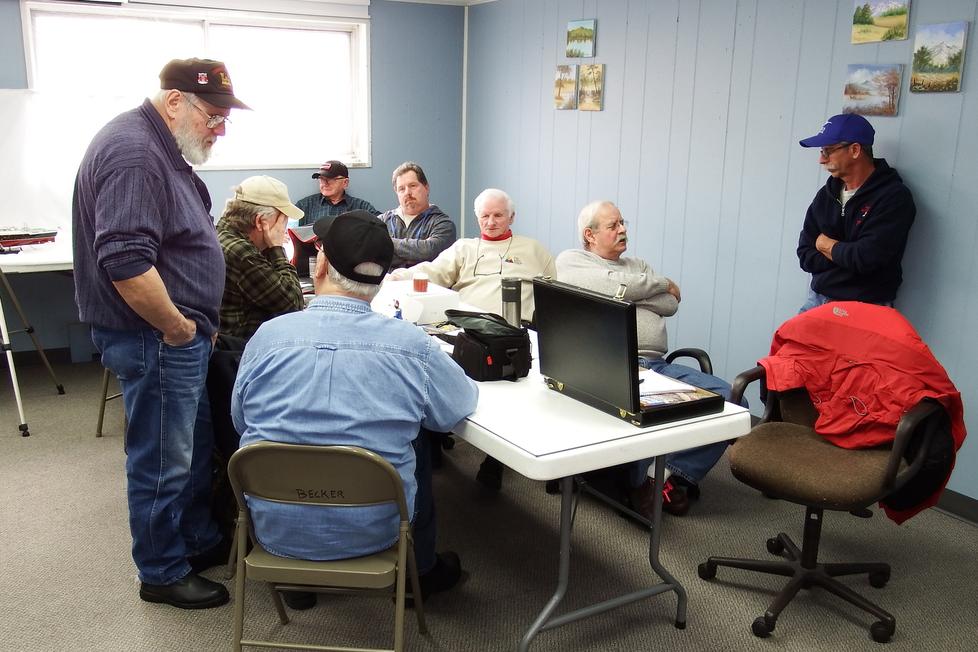 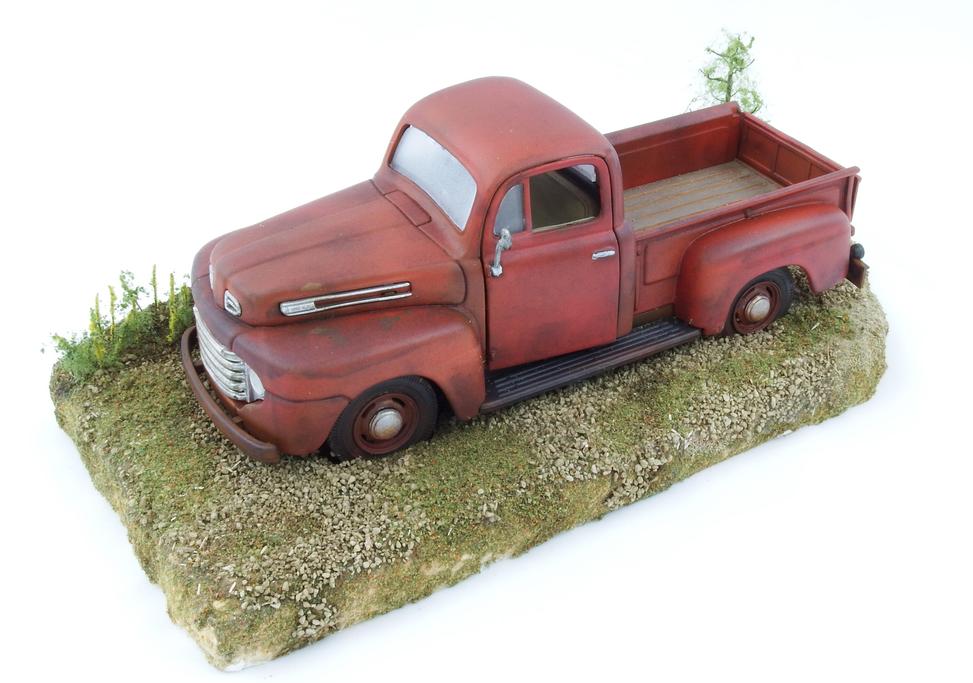 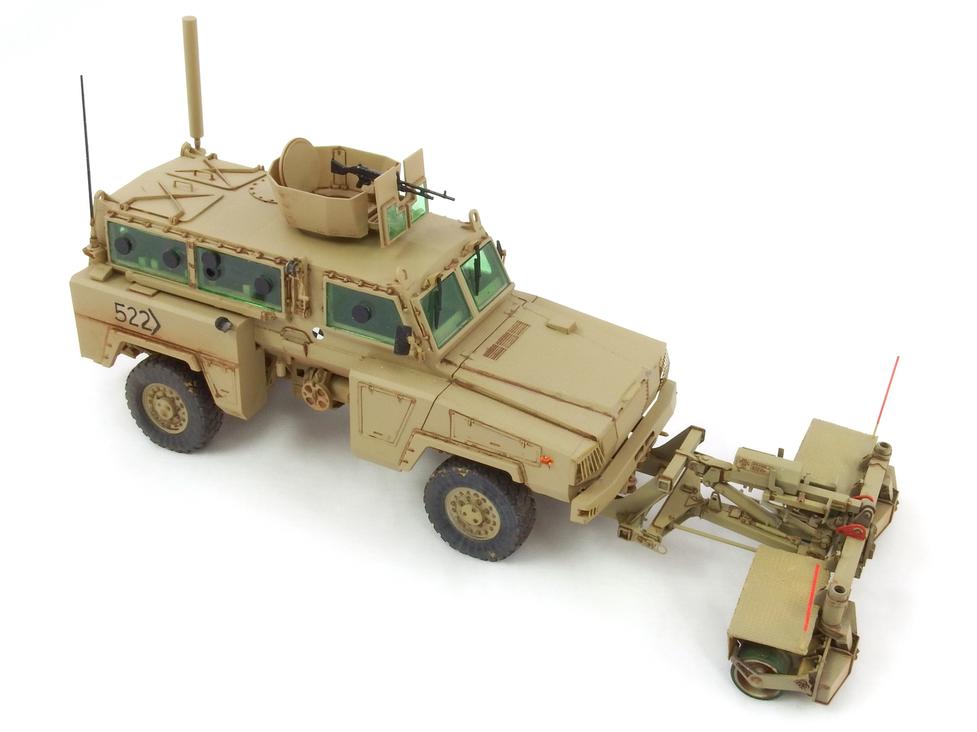 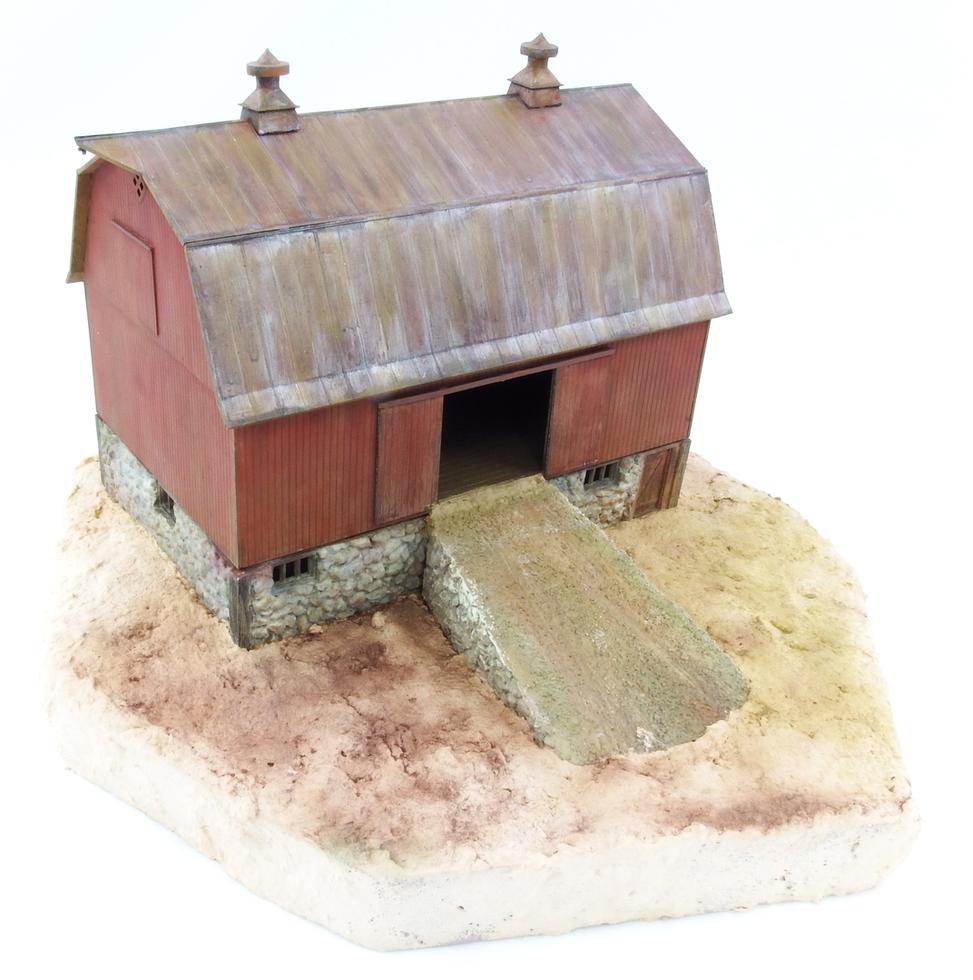 Big Daddy Jerry Bridenstein (Jerry, I looked up Bridenstein online and they say the name is German and translates as “he who glues plastic”…but we still love ya!  ;-)  ) displayed medium and heavy French WWII tanks.  The heavy tank we have drooled over before.  Today, we focus on the medium Somua S35 medium tank from Tamiya.  Interestingly, both tanks used the same turret and 47 mm gun.  Fantastic job on both, Jerry.  “He who glues plastic” also knows how to paint and weather!. (I have also included the heavy tank because it is cool!) 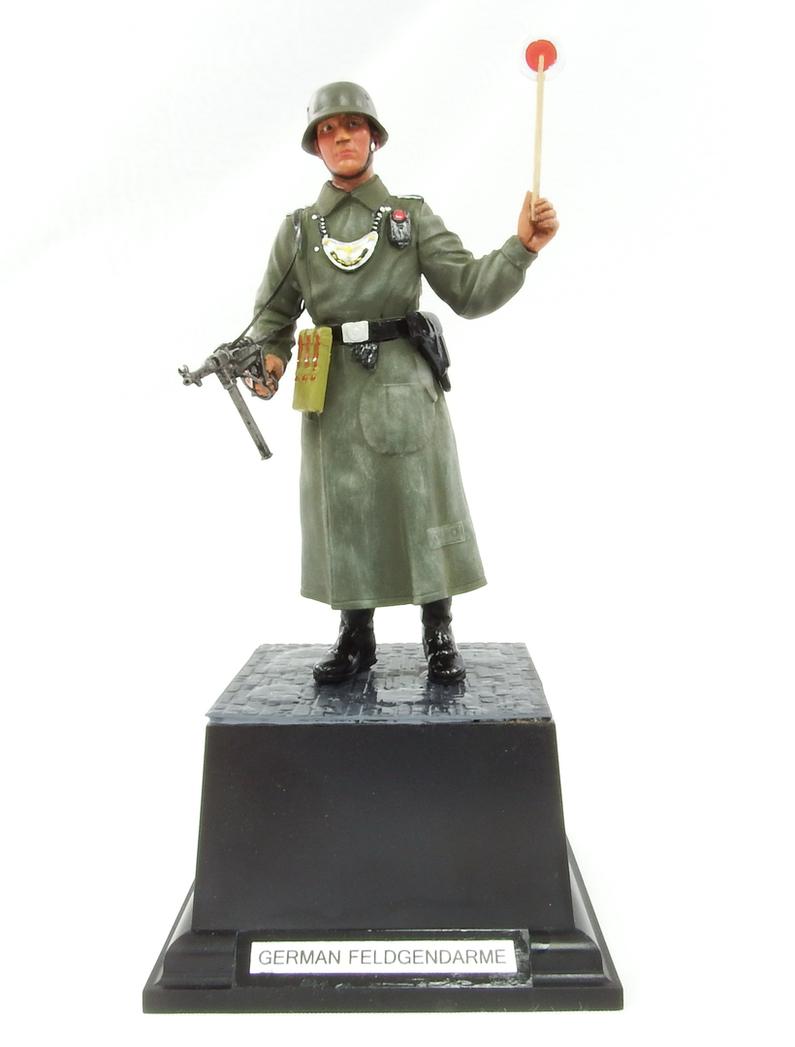 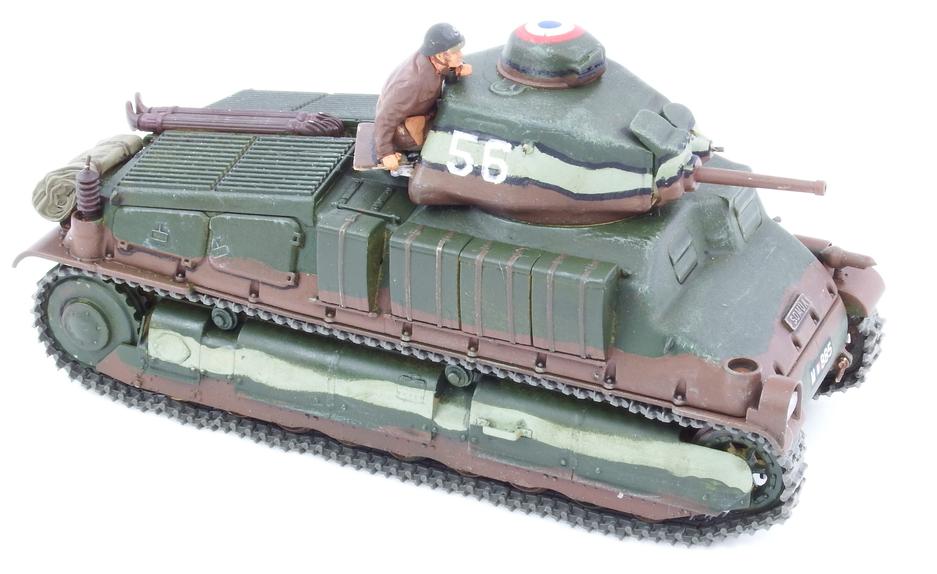 The Pres, JR Burggren, is on a roll with this 1966 Chevy Impala modified stocker built per the kit instructions…huh??  Oh, wait.  He had to make the roll cage taller, modify the rear deck of the interior, and ground the tires.  He painted it in Krylon safety yellow, Testors flat red, and Testors black one coat lacquer.  Sharp, sharp, sharp! 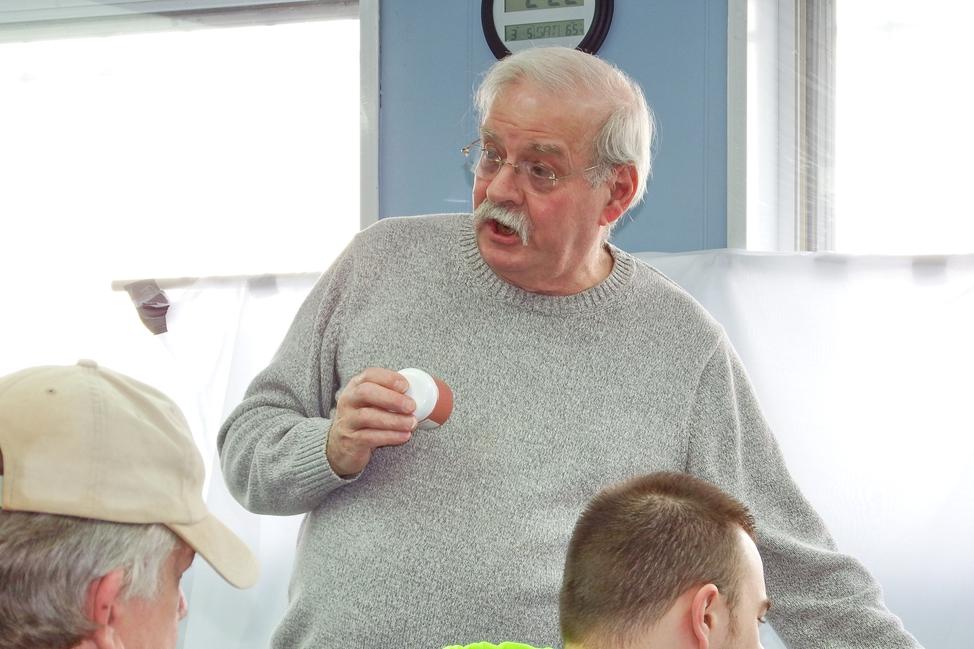 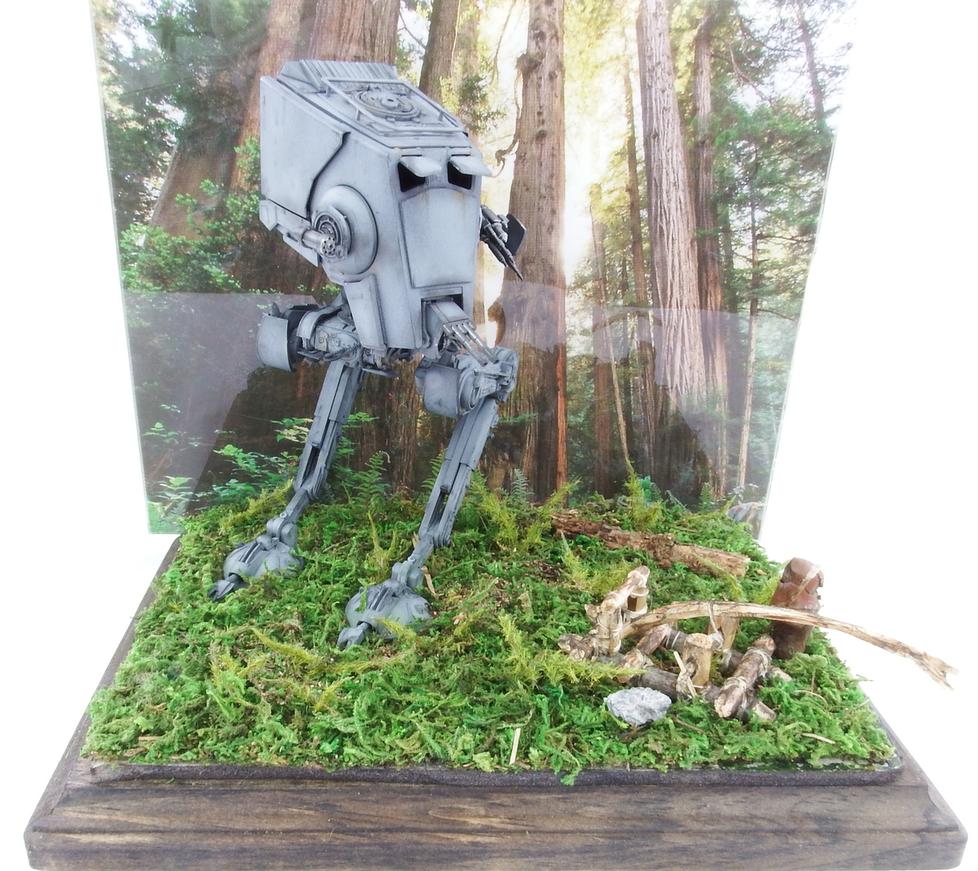 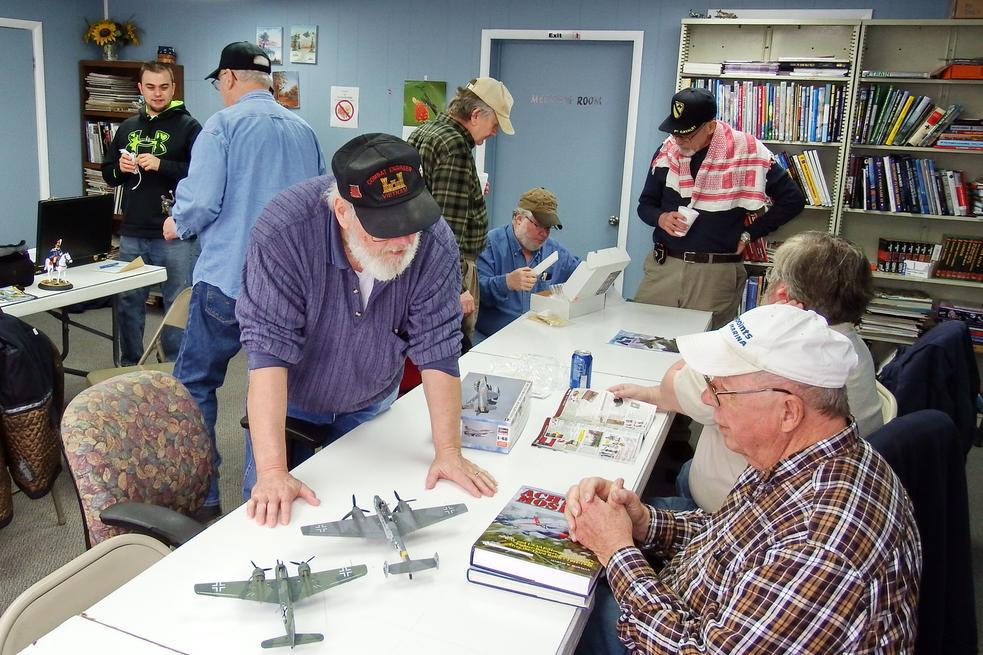 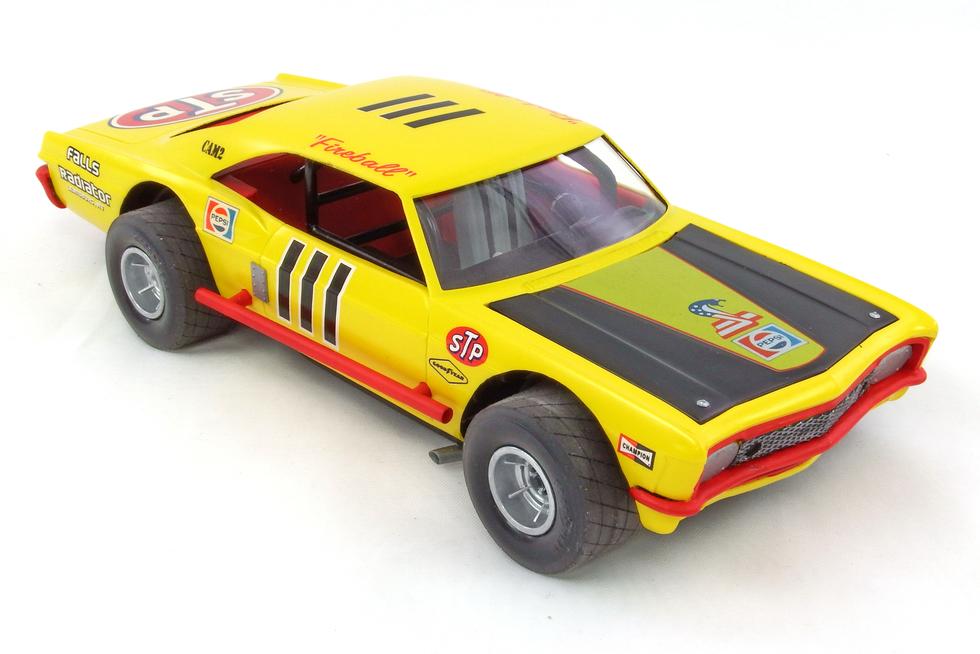 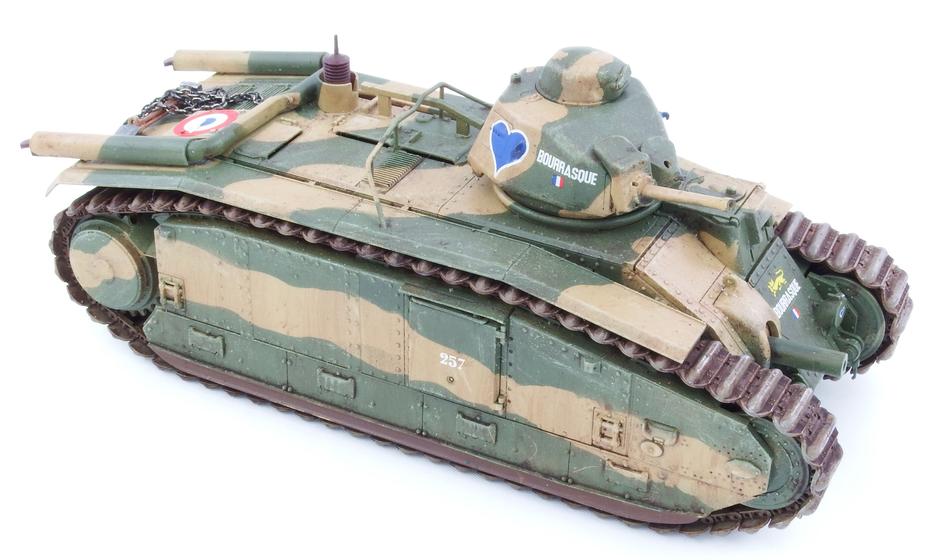 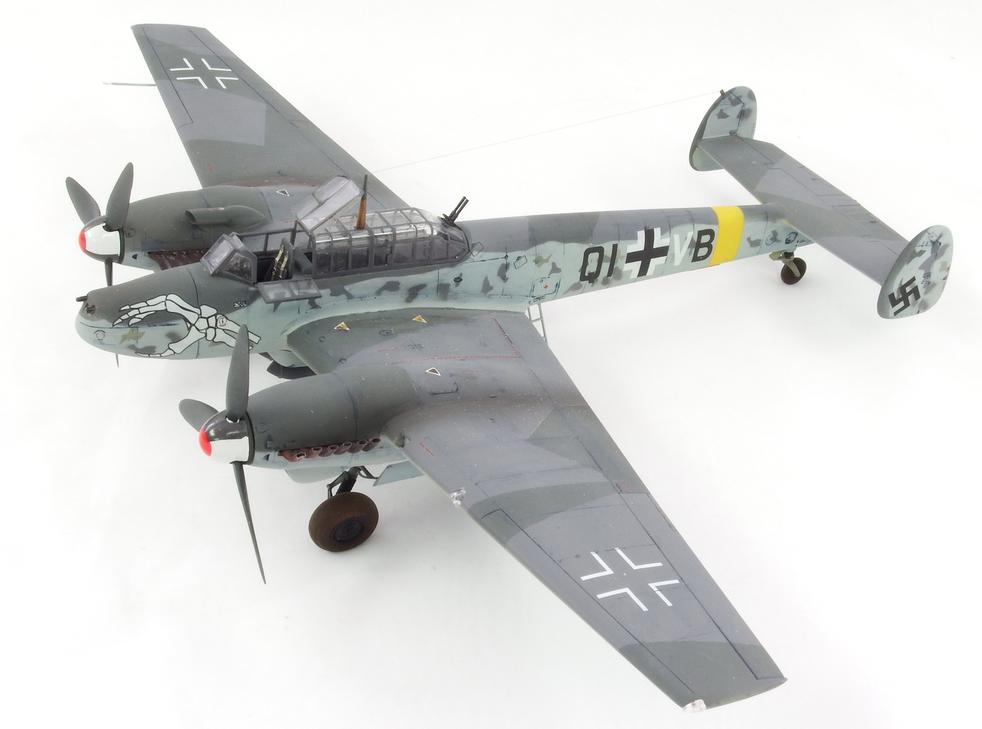 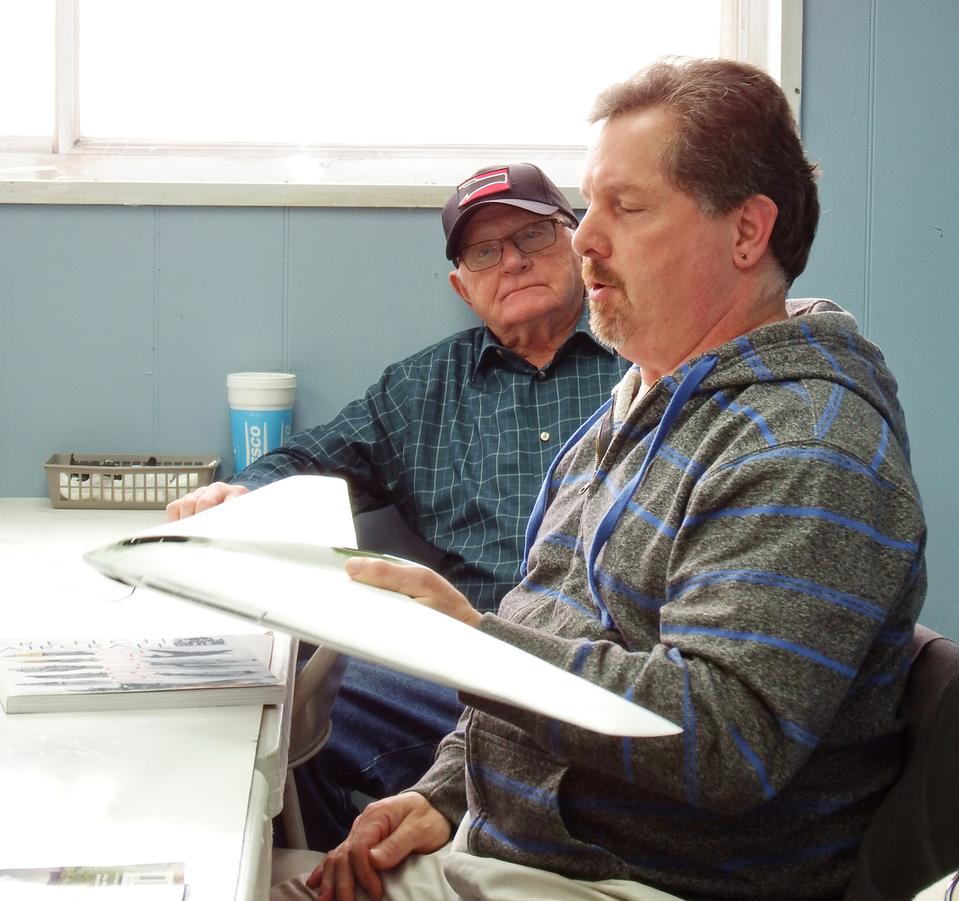