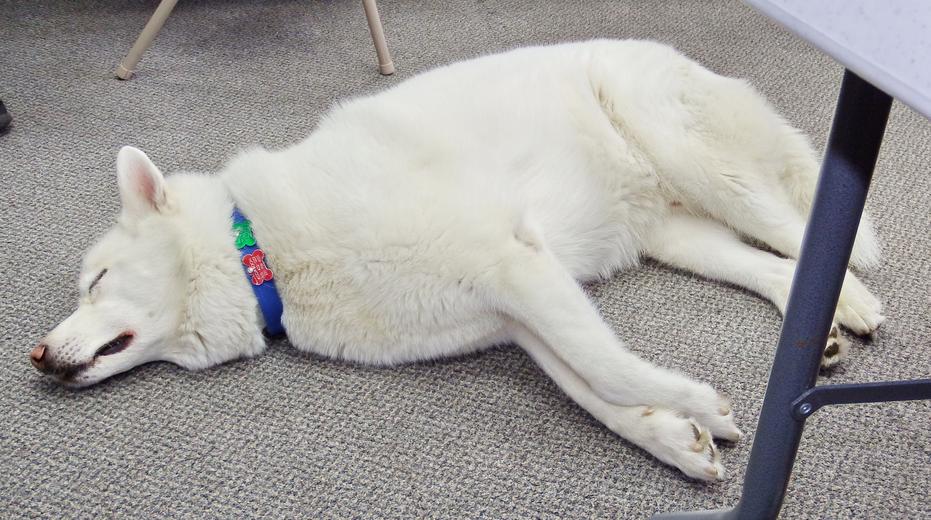 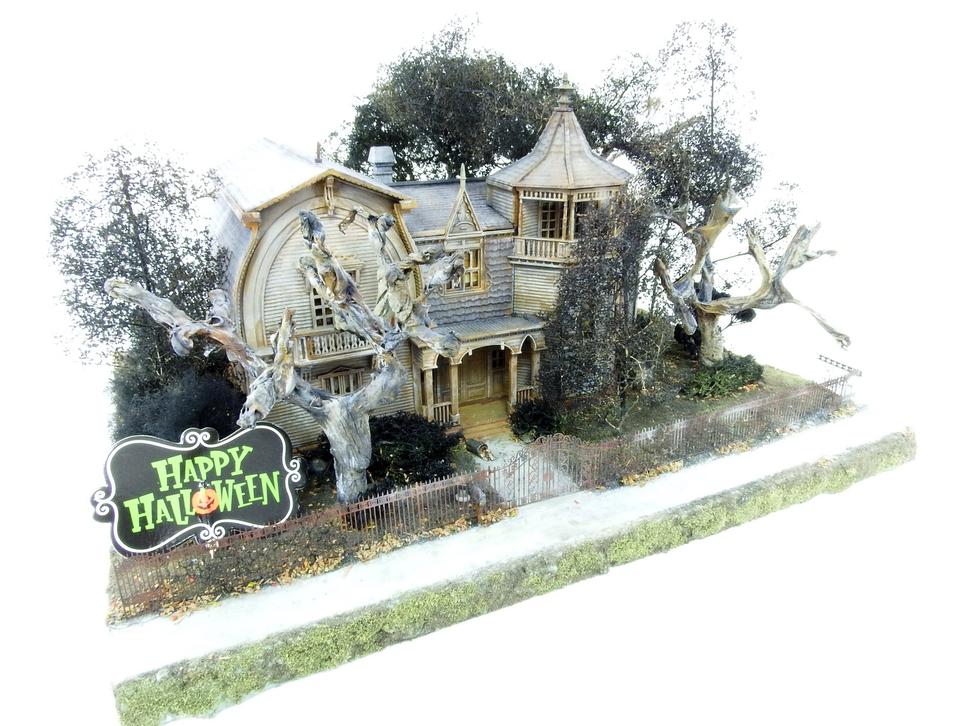 Mark Jahsan reported the sad news that he and his partner have closed their restaurant business in Grand Haven.  Darn.  We wish him great success in his next endeavor.  The theme for today is Oscar…as in the Japanese plane.  I don’t have a data sheet from Mark so here goes nothing…and I do mean nothing.  Starting at the top left, we have an Oscar in Indonesian colors.  Clockwise, we have one in Chinese markings, Taiwan, and then French.  Boy, Mark does great work!  Good to see you again, Mark! 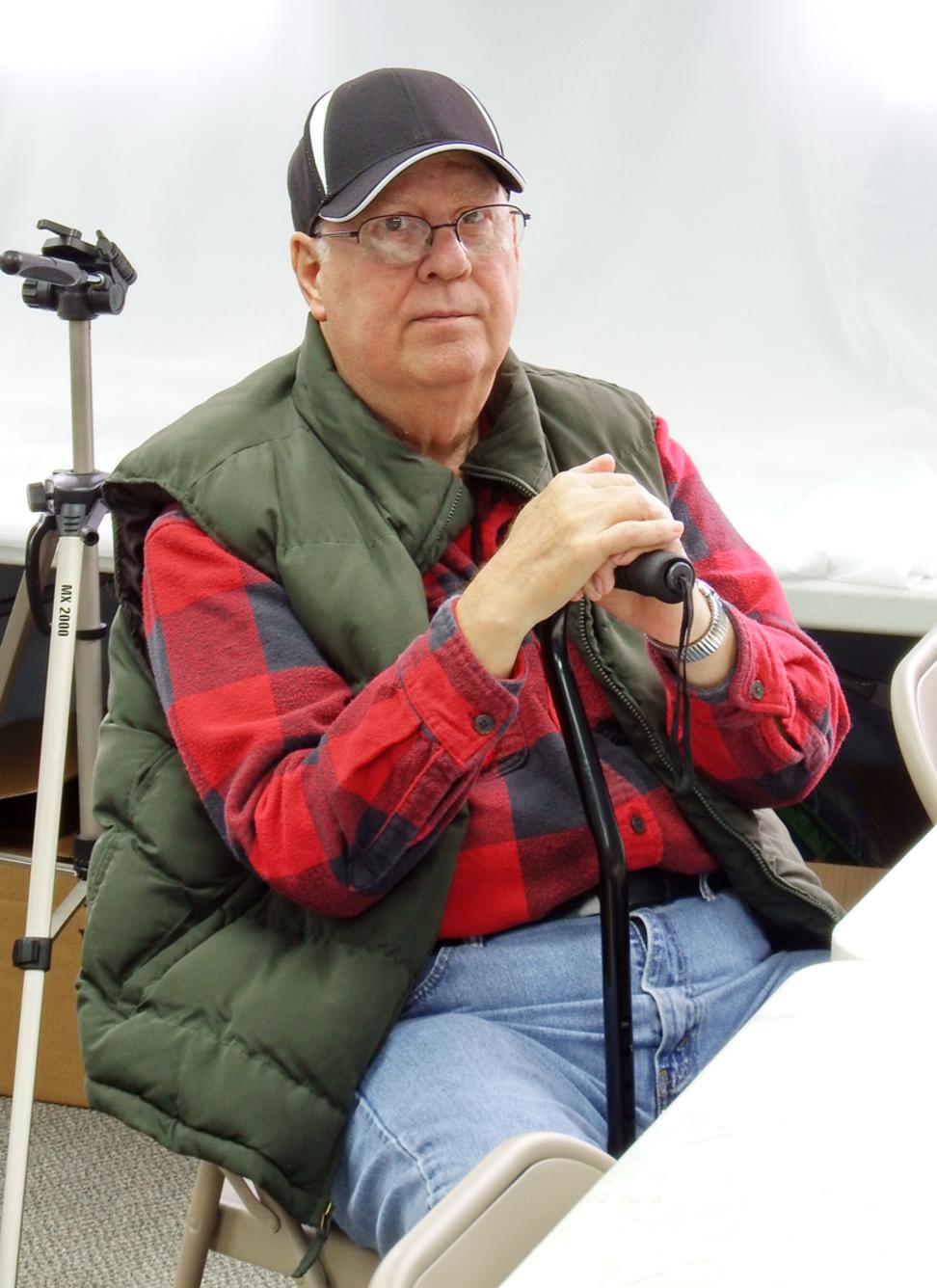 Our President, JR Burggren, amazed us with another one of his racecar models.  He started with the Monogram racing classics dirt modified and converted it into an old sprint car.  He changed the tires (grooved them) and the wheels and added the wing.  The injector tubes are made from heat shrink tubing.  That’s all well and good.  But what really blew us away was he painted this puppy with a brush.  Wow.  My airbrush finishes aren’t this good.  I don’t like this guy.  I’d like to get rid of him but you knuckleheads keep reelecting him…year after year after year.  ;-) 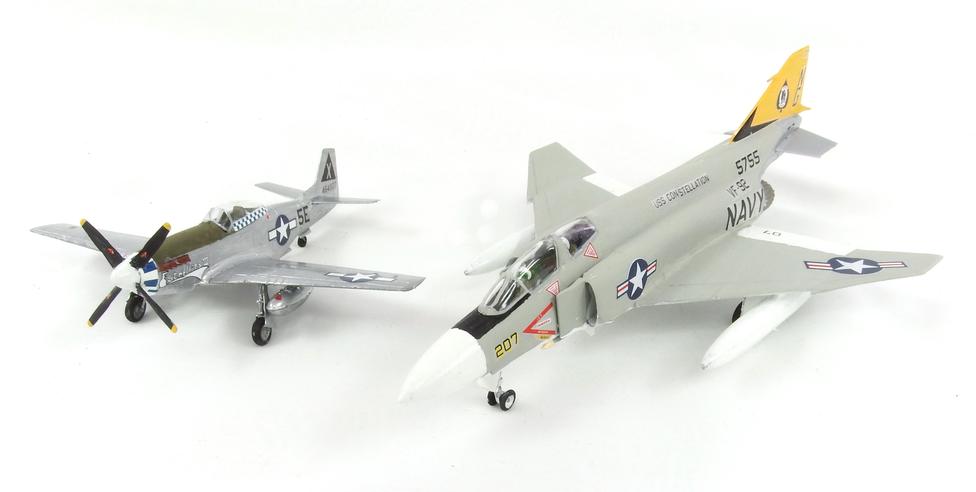 Alan Vandam brought in three beautiful models.  We have an Airfix Spitfire, 1/48 Tamiya Crusader to which he super-detailed the guns, and a magnificent 1/48 Navy E-2c from Skunk Works…which was not an easy kit to build.  Alan uses lacquer paint for all his models and often has then custom mixed to meet specific FS numbers.  Awesome!

Dave Martin was a no-show but he dropped off this very nice 1/48 Revell Bf-109 and carries the name Rosemarie.  Dave originally wanted to paint this model in RAF colors but this plan fell through.  The guys thought this was one of Dave’s finest models.

Let’s start off with structure pro, Al George.  I apologize ahead of time for the quality of this photo.  It may sound weird, but it should be much darker!  You may see this model in the background on some other photos so you can see what it really looks like!  This was a plastic (not wood) kit by Moebius of the Munster house.  The house is hand painted with Life Color “weathered wood” and pan pastels.  There are four scratchbuilt trees and check out the PE fence.  All the foliage is painted black for effect.  So cool.
In the second photo, you’ll see a highly detailed dime with perfect coloring and weathering.  Oh, and there is also a Wheel Works 1/87 scale Fordson tractor.  Al did all kinds of cool weathering techniques.  I think the dime is pretty nice…   ;-)
And in the final photo, Al goes off his rocker and builds a Jimmy Flintstone 1/87 Willys resin body with a Muscle Machines 1/64 chassis.  And the headlights are painted and look remarkably realistic.  Great job on all, Al. 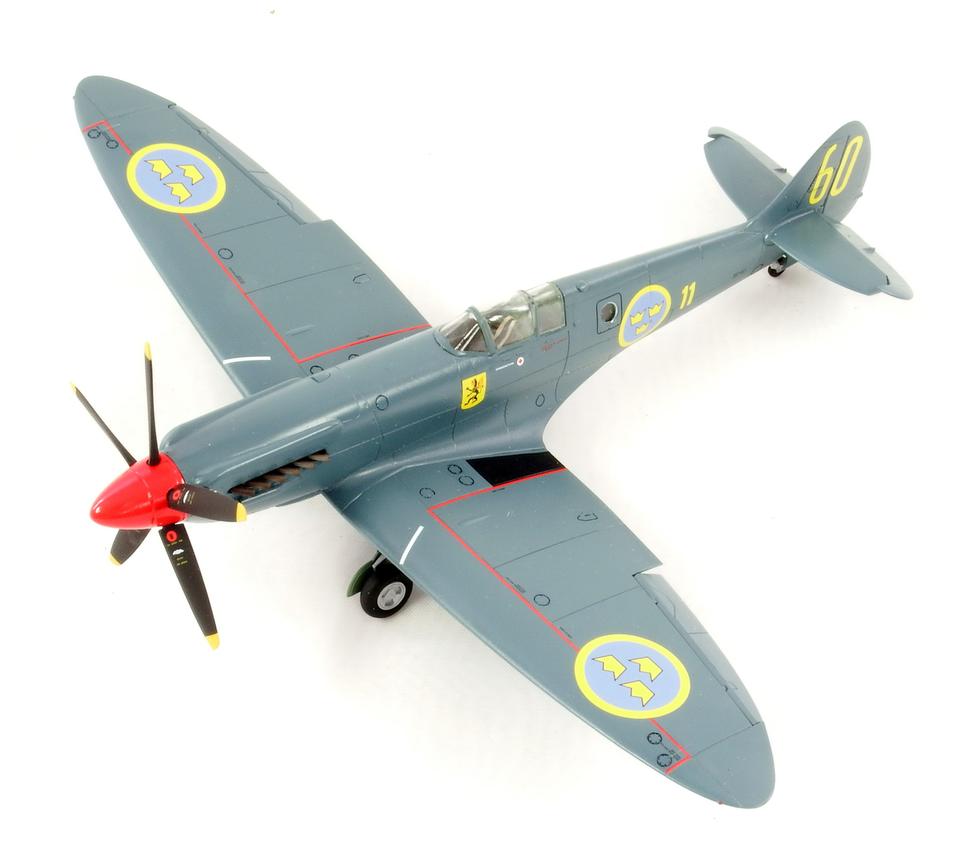 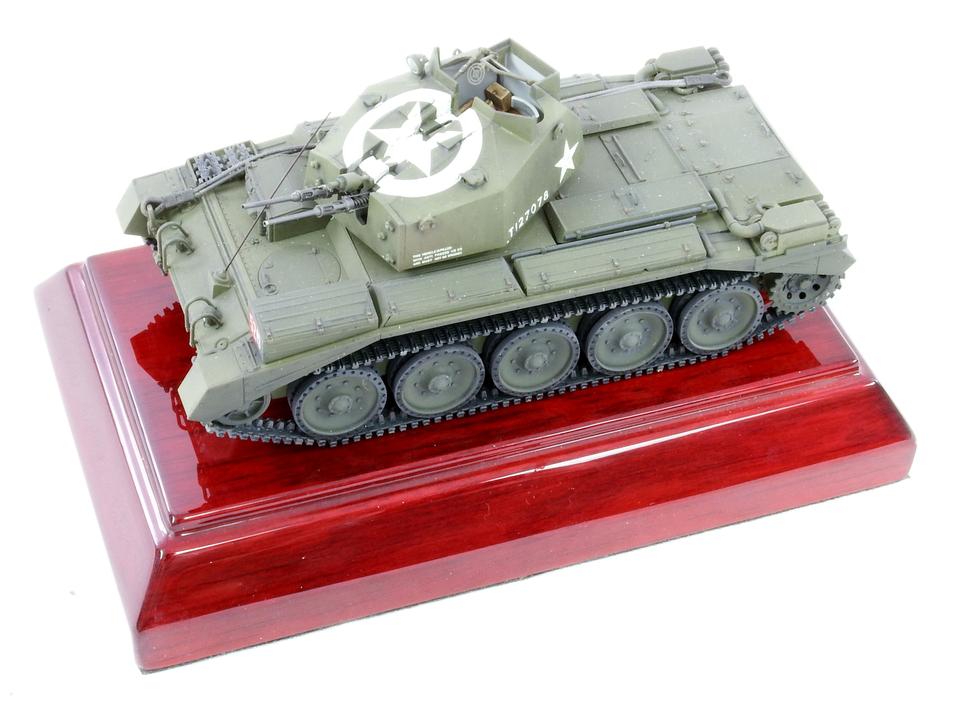 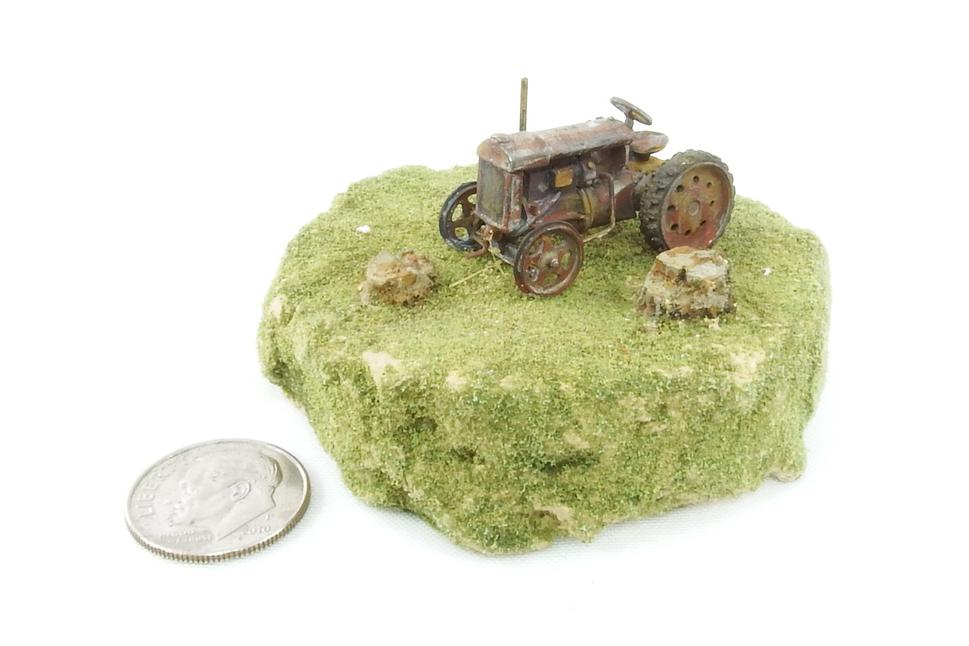 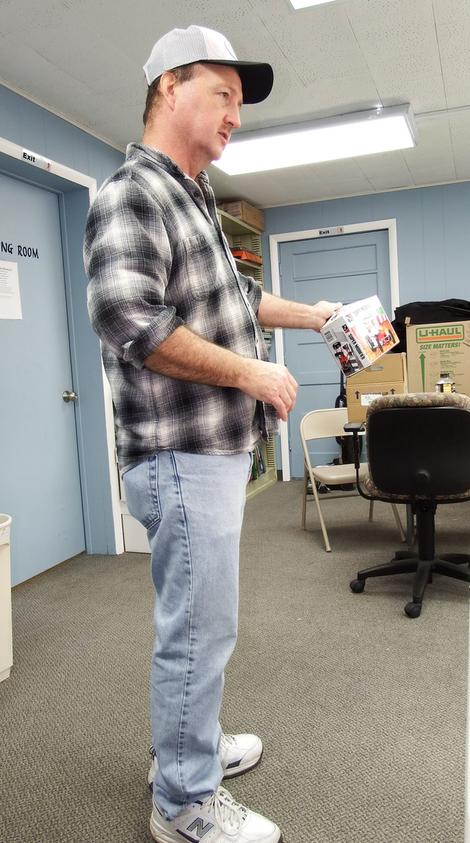 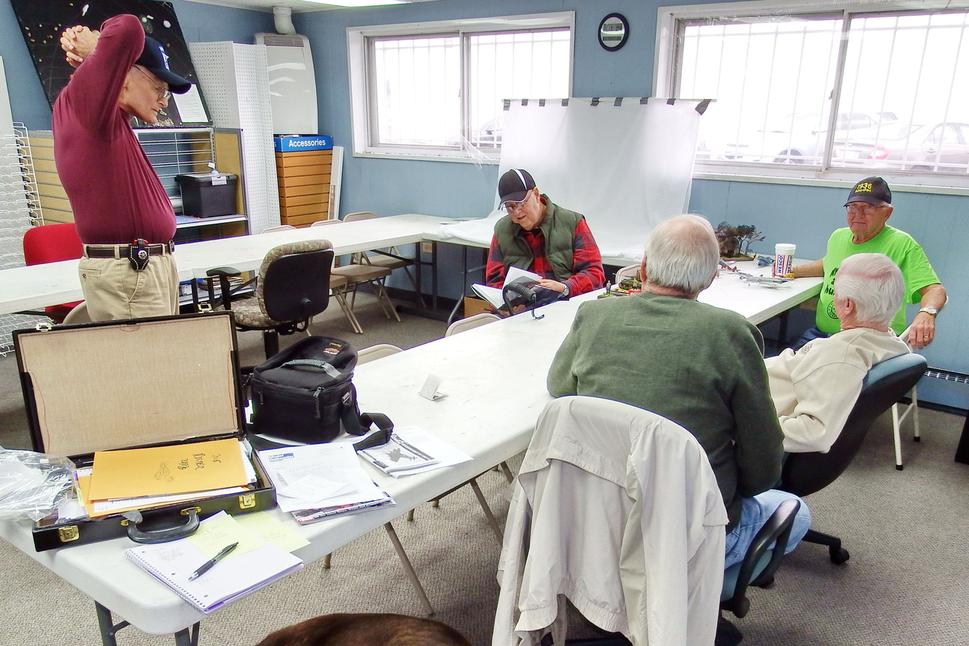 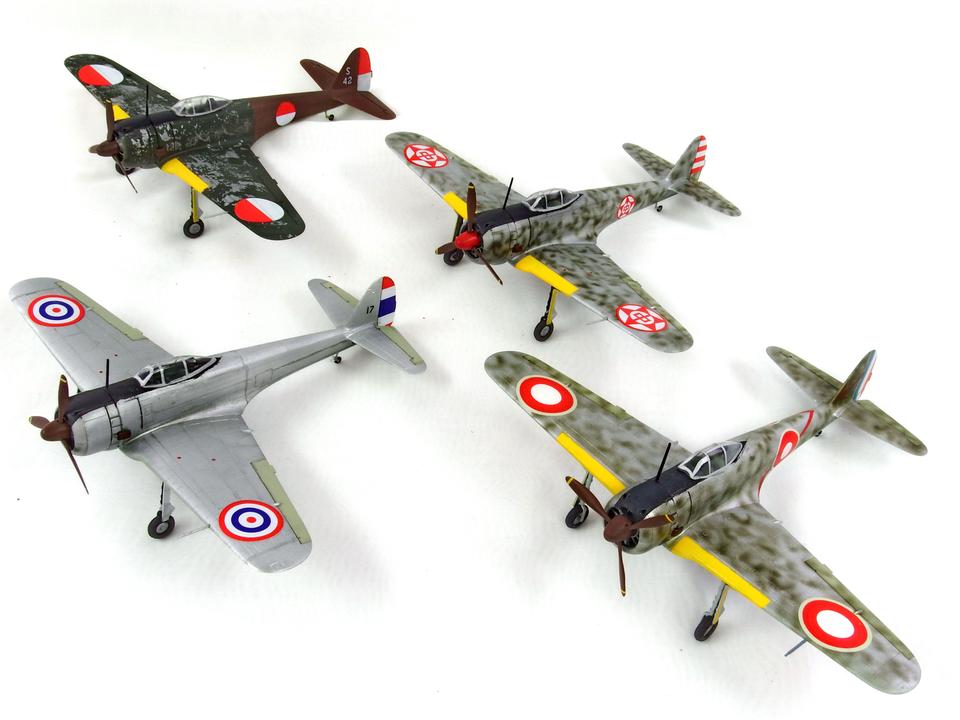 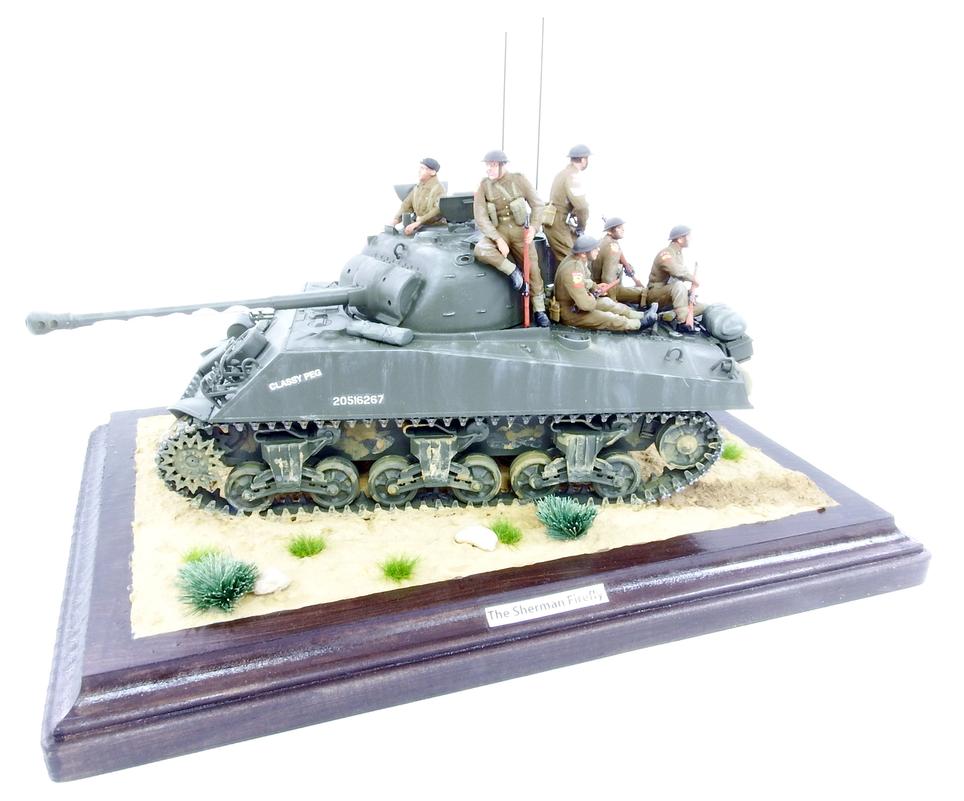 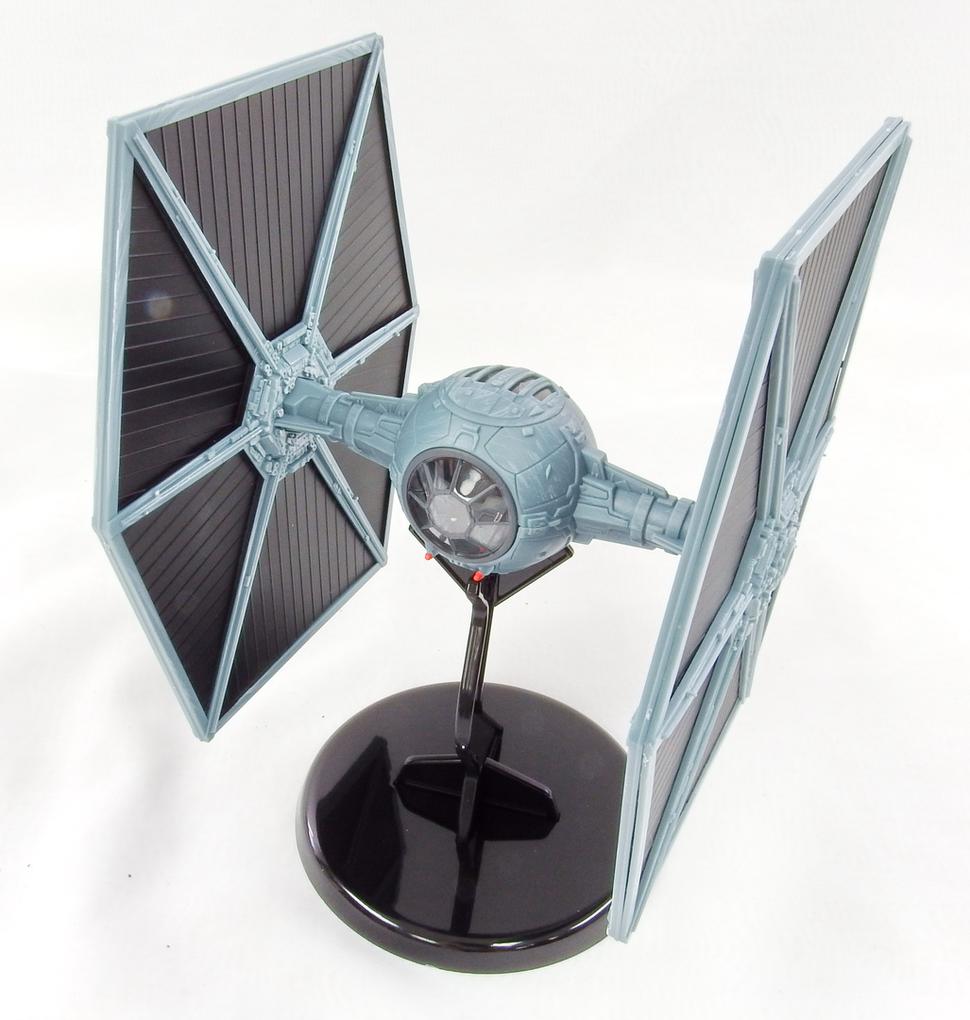 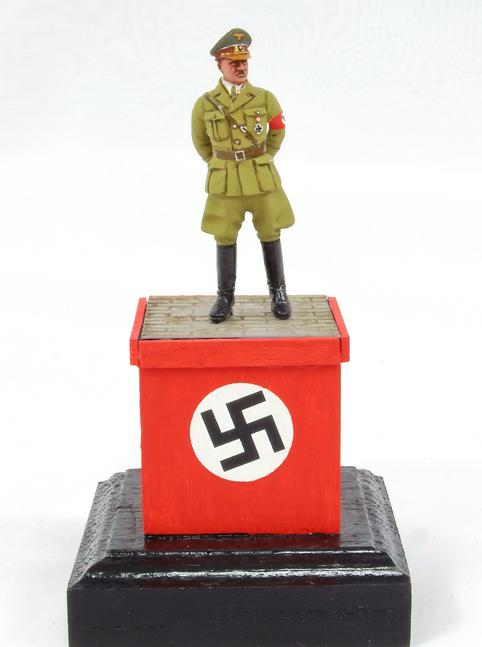 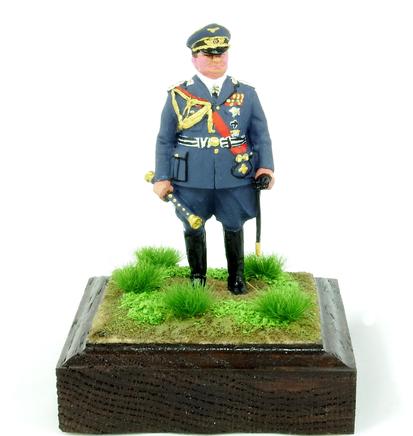 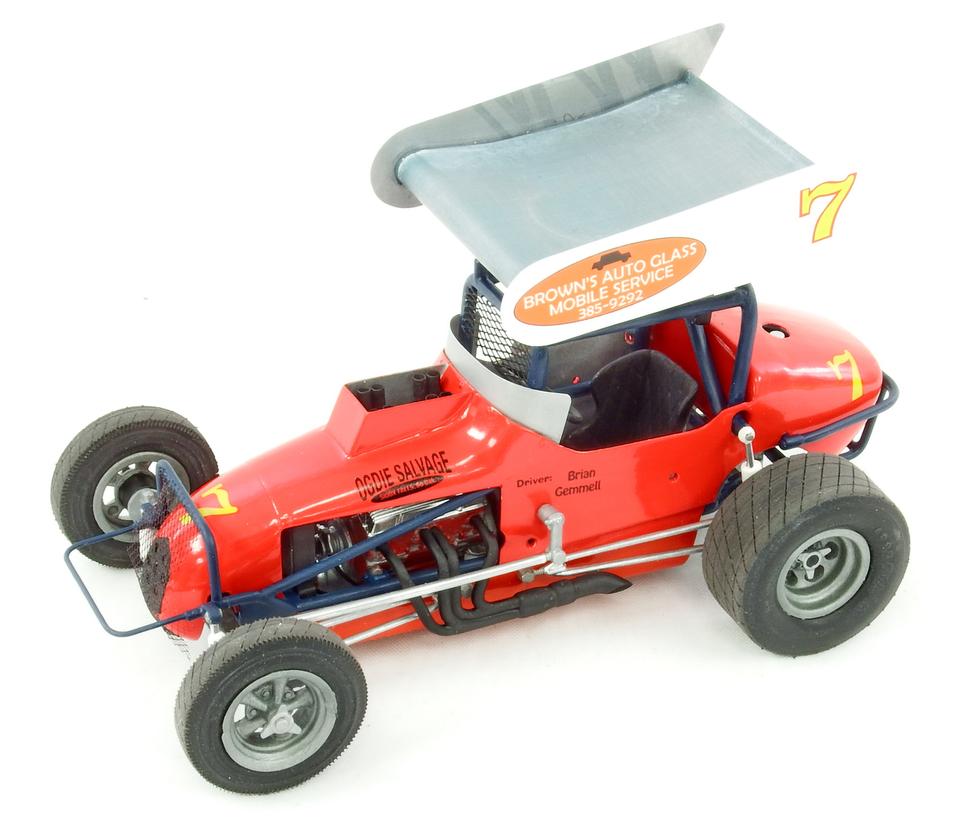 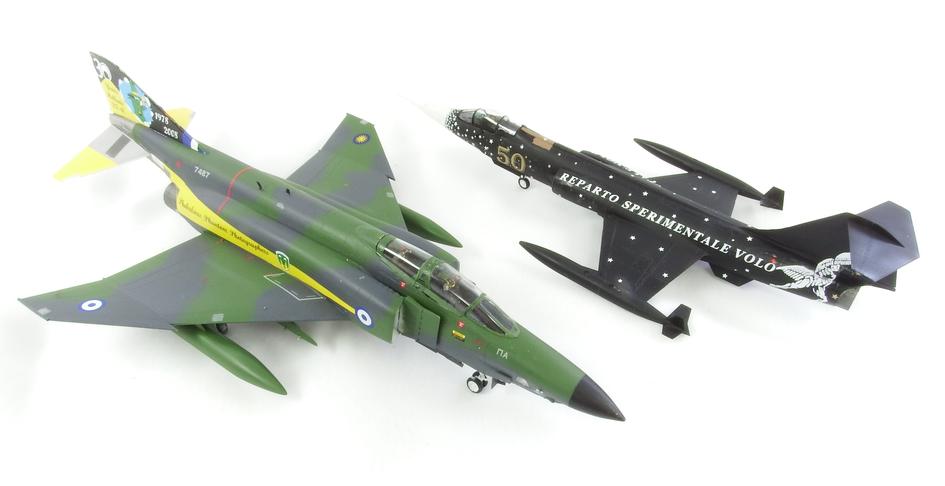 OK, we’ll close with four dynamic and awe inspiring photos.  Well, maybe not the one of Bob….   ;-)

Mark Beck, without sidekick Caleb, brought in a Revell Snap-Tite model of the Star Wars TIE Fighter.  The kit was pre-painted.  And yet Mark still managed to build the model upside down.  OK…I made that up.  Very cool looking.  Thanks, Mark!

Doug Schuur brought in two gorgeous models…an F-104 and a Greek F-4 Phantom.  Both kits are from Hasegawa.  Proving that even Doug is human, he accidently grabbed the Dullcote instead of the Glosscote and used it on the Starfighter.  They both look classy! 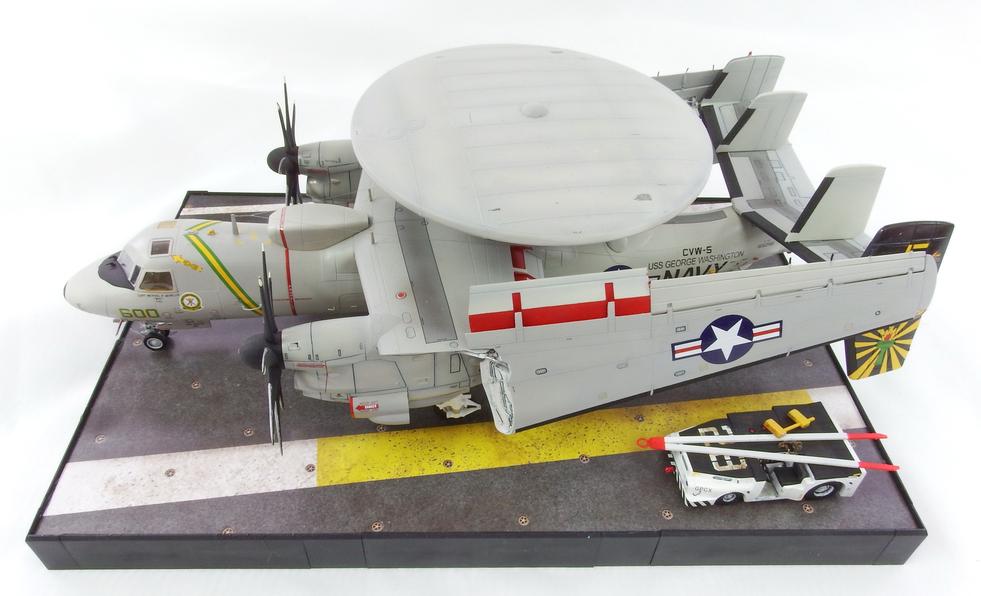 See ya at the November Work Session and don’t forget the Potluck on December 5th! 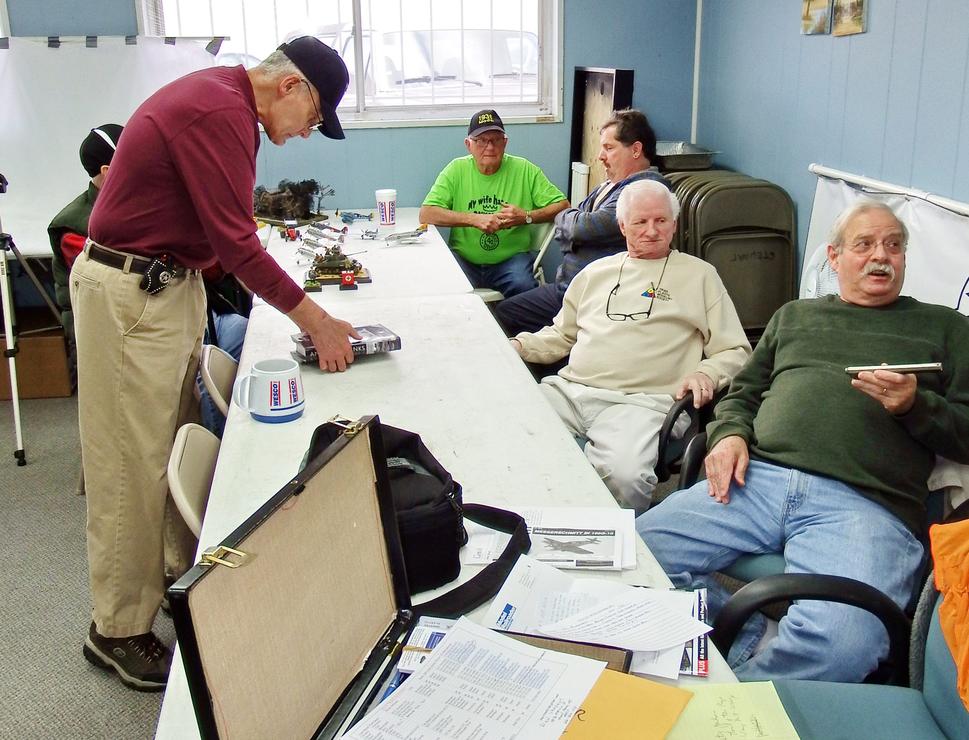 Bob Thompson pleasantly surprised us with a Tamiya tank model…but it included Verlinden resin aftermarket goodies to turn a Sherman into a British Firefly.  Check out the British tank riders. The next two photos are of Hermann and Adolf.  Goering would weigh about 300 lbs as shown and is a metal figure.  Hitler is a Verlinden resin figure.  Bob used Tamiya OD on the tank and Vallejo on the figures.  Great work, Bob!