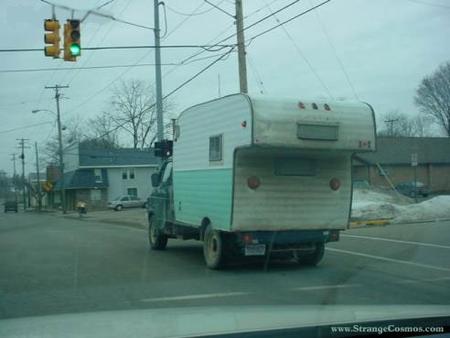 Also from Bill: this photo of a dyslexic camper!

Spring had reportedly sprung but it was nowhere to be found as it was 25 degrees, windy with snow showers.  Seven members in need of a styrene fix came together to swap wild tales, misinformation, and just good old-fashioned lies.  President Tom Miller held our attention while he conducted club business.  Well, something like that!  Tom did have some important topics to cover.  TRIAD will be participating at the MCC Mayfest on Saturday, May 19th.  We have at least three club members currently signed up to bring in models and be available to answer questions from the public regarding TRIAD and the hobby of model building.  This is going to be a fun day!  PLEASE CALL DAN JAYNE NOW (MAY 1ST AT THE LATEST) AND CONFIRM THAT YOU WILL BE ATTENDING!  Dan’s phone is 616-842-3901 in Spring Lake.  MCC is supplying us with indoor accommodations and six tables upon which to display our models.  You can even work on a model while you are there.
Another important topic is that the club wants to hold another picnic this summer.  We are looking for a park where we can reserve a pavilion and a place for the kids to play.  If you have any suggestions, let somebody know!  Also, TRIAD will again this year be a $20 sponsor at the Kalamazoo military model contest in September.  You may recall, we had quite a gang of TRIAD members (and a bunch of their wives) attend last year and the club hauled out a lot of awards.  But most importantly, we had a ton of fun.  Plan now to attend.  (Just watch out for Jeff McClain’s wife as she can be pretty mean!)  ;-)
We think Tom said some other stuff but nobody could remember what it was.  Hey, it’ll be the old business at the next meeting!  ;-)  Oh, and happy birthday to Julie Miller today!
What’s up:
Robert “classy” Bell: Hey, what a great surprise!  We didn’t expect to see Bob again until sometime this summer!  Bob was working on a 1/32nd WWII Ju87 German Stuka (AKA krap) that he was building under duress, pressure and coercion from Dan Jayne.  You could tell Bob didn’t want to be building it but saw no safe way out of his predicament.  Too bad, Bob.  Ya gotta learn to stand up to the bum! Bob also showed me the instructions, or should I say instruction book, on a Heller sailing ship.  For me, a skill level 1.5 kind of guy, this kit was my worst nightmare.  Way, way, over my head.  Good luck with it, Bob!
Tim “tiny” Ridout: No surprises here.  Tim was once again working on this miniscule kit.  He said it was a 144th Mig 29 but it could have been a car or ship model for all I could see.  Tim is one sick puppy.  Not even Dan’s messes with this guy!
Tom “911” Miller: Speaking of no surprises, Tom has been busy with cop cars!  Lots and lots and lots of cop cars.  Oh how I bet Tom longs for the day when he can once again build an M4 Sherman!  Tom was showing off the custom made decals he purchased for his cars and they looked fantastic.  I just wish I could make that kind of quality decal at home.  Hang in there Tom!
Mike “diorama” Eckstein: Mike is working on a Japanese pillbox/cave emplacement on Iwo Jima.  I can hardly wait to see it.  I know the judges at Rider’s and Kalamazoo will be impressed!
Brad “all-American” Hicks: Brad reported to duty with not one but two WWII American vehicles: the M8 Greyhound and the M26 Dragon Wagon.  With the attention to detail that Brad showers his models, these guys will be just awesome!
Chuck “skill level 1.5 and falling” Stewart:  Yours truly is really struggling with the Accurate Miniatures B-25.  I have found the kit not as precisely molded as I had expected and in my foolhardy and over confident attempt to follow in the great Dan Jayne’s footsteps, have messed the model up from nose to tail and from wingtip to wingtip.  Once again my grandiose visions have been dashed by my total lack of basic modeling talent.  Maybe I’ll just show it crashed on some tropical island all covered with jungle growth!
Dan “his eminence” Jayne: Was hard at work on a ’40 Willy’s Coupe which will be severely customized.  This was an expensive kit as it cost Dan six of his kits in trade.  John “car guy” Moore said there was a sucker born every minute!  ;-)  I wonder what Dan would trade me for my B-25?  ;-)

Raffle winners: Dan Jayne, Chuck Stewart, and Tim Ridout.  Thanks to those who donated kits to the raffle!