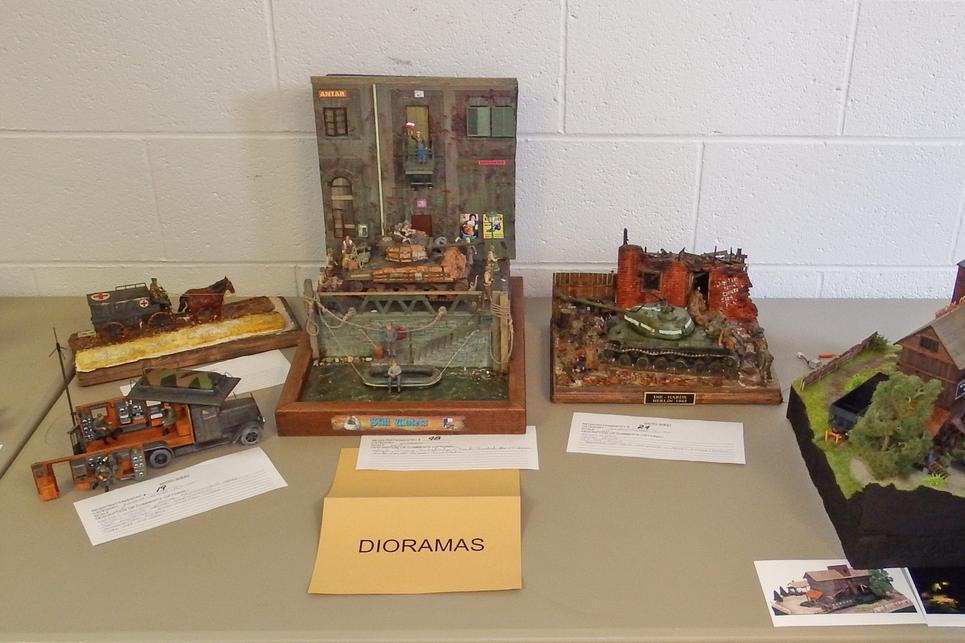 It was forecast to be 92-95 degrees in GR but fortunately the rain and clouds kept the temperature down…for most of the contest.  Big fans helped!
In attendance were JR, skill level 1.55, Jerry "Big Daddy"B, Prof. Leger, Alan Vandam (dual citizenship!), Deb Fowler, Dale Yonkers, Spencer Dobson, Mark Beck, Darrin Watts, and Mark Jahsan.  Of those ten, six entered the contest.
Our President took first place in the automotive category.  This is the seventh time in twelve outings that he has won that category.  Awesome.  In this photo, JR is awarding himself the first place plaque.  Congrats, Pres! 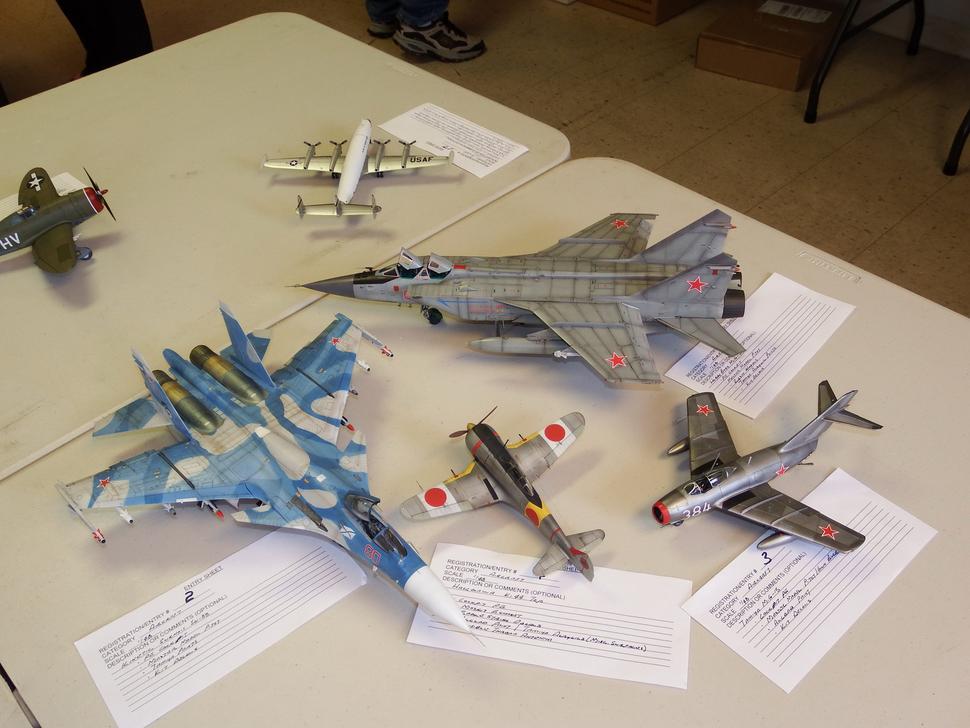 Here’s something ingenious from John Tinay of GR…but he’s a Purdue grad so you expect great things!  He created a clear booth for working on small parts that are prone to disappear…e.g. PE when you are cutting them off the fret.  He has four more for sale but not everything you see here is included.  John is also a fantastic modeler!

Speaking of aviation, here is Mark Jahsan’s magnificent HKM 1/32 B-17.  It is fantastic.  My only regret is that Mark didn’t have photos of the interior…which is spectacular. He did a fantastic job and I can’t wait to see it at the July S&T.

I want to thank Tracy Cummings of the GR club for the great meal which included delicious lasagna and strawberry shortcake.  You can imagine how hot the kitchen was!  Thanks, Tracy!
Finances:  The meal cost was only $85 (thanks again, Tracy!) and there was a $140 contribution to the church for the use of the room and kitchen which left TRIAD with a $75 profit!
Here is a shot of the TRIAD table with a few missing. 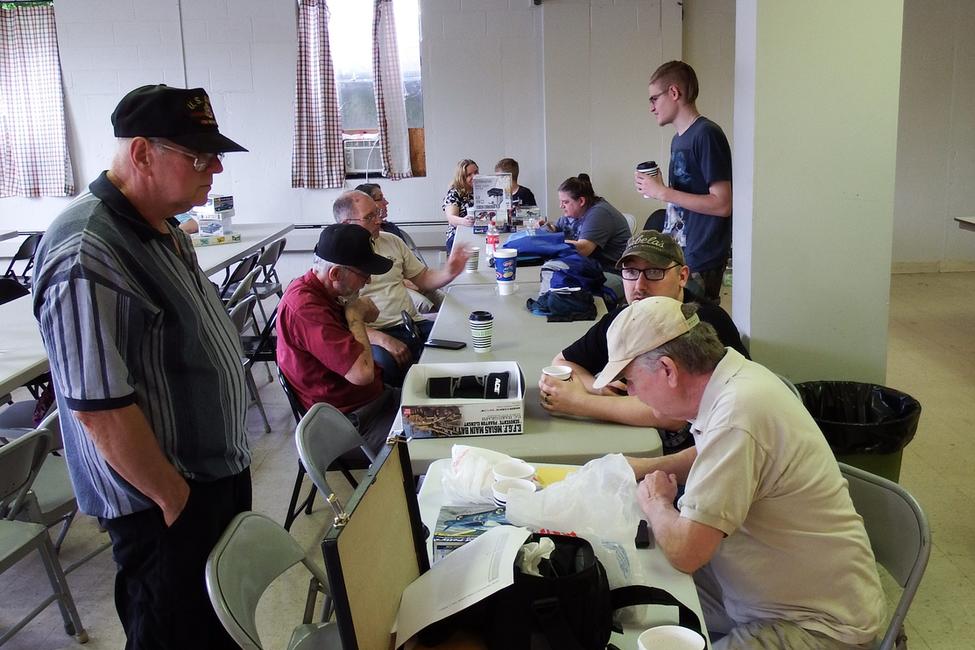 Well, another year, another first for our President!  I hope everyone who attended had a good time.  It will be interesting to see what the K-Zoo club comes up with…they certainly have the experience after running the K-Zoo contest for so many years. 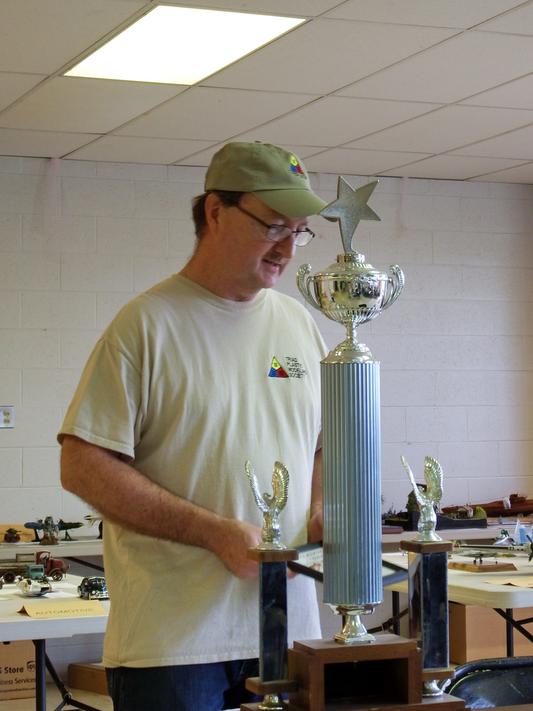 By overwhelming popular demand (hey, you keep telling me there is never a photo of me…I bet you’re sorry now!!), here is a photo of skill level 1.55, taken by Deb, receiving the first place plaque in the small model/Ridout category.  I kept this model a secret as I wanted it to be a surprise.  I’ll bring it in to the July S&T but it is a model of a hypothetical Ridout’s Big Rounds Pizza shack.  Skill level 1.55 also tied for first place in the diorama category with his Vandam Coal Company.

Here are a couple shots that encompass the Ridout small category, misc/sci-fi, dioramas, watercraft, automotive, and I don't know what happened to the photos of figures and armor. 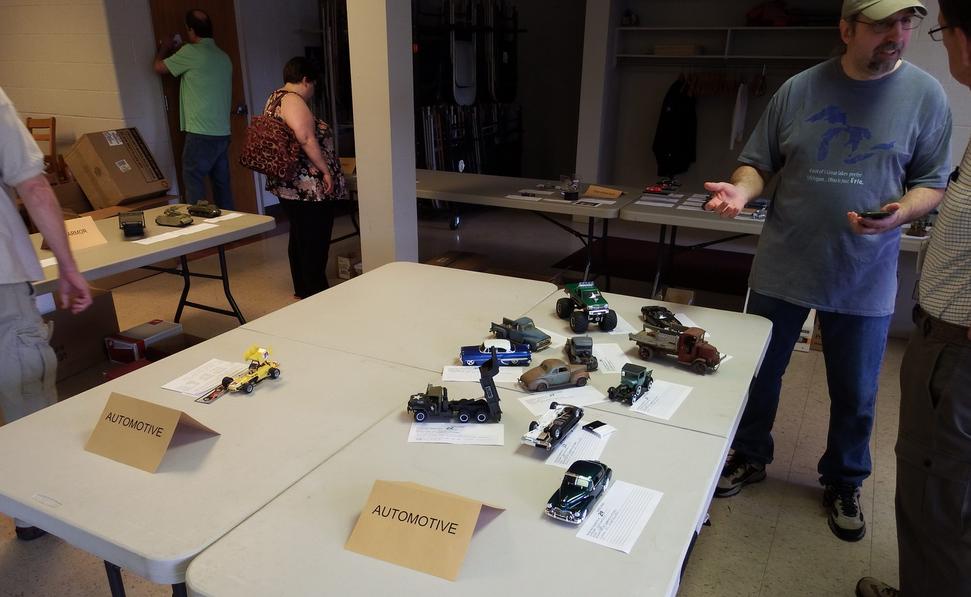 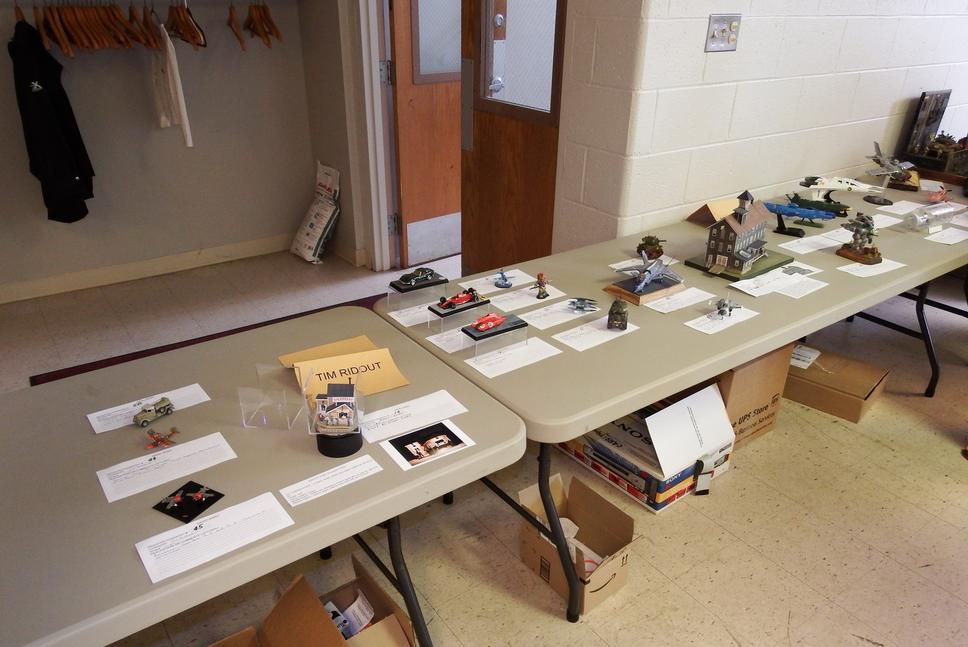 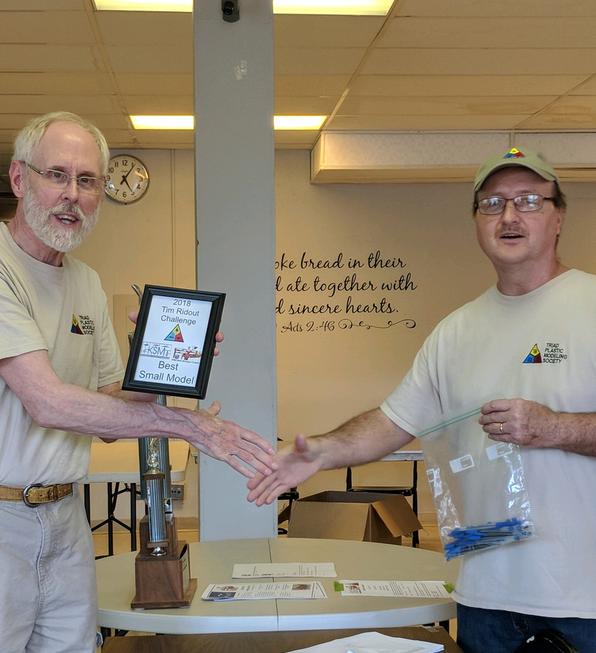 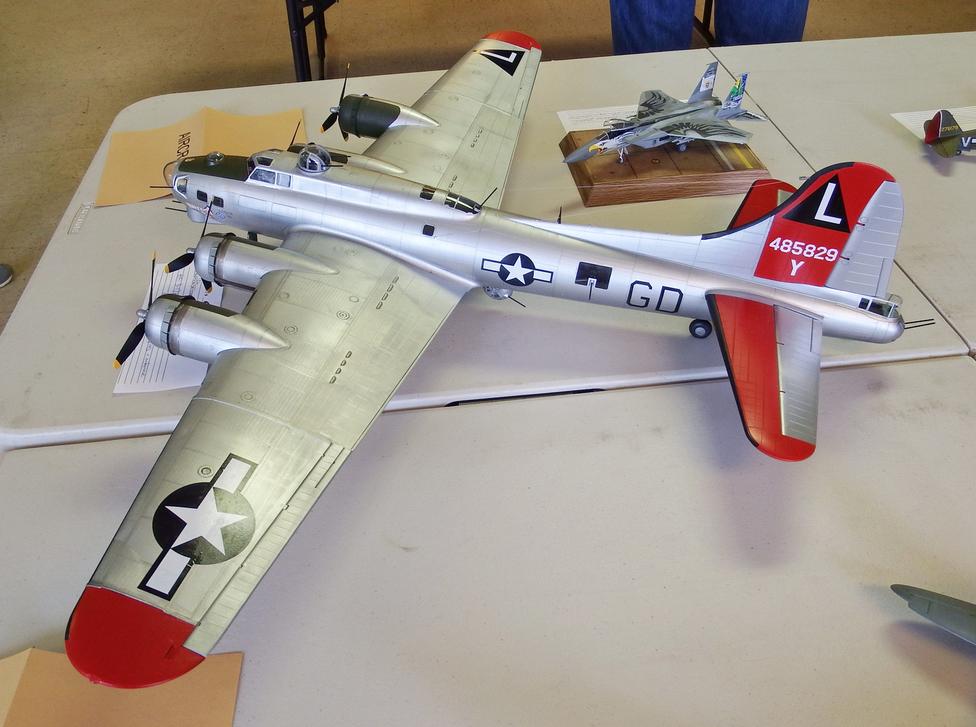 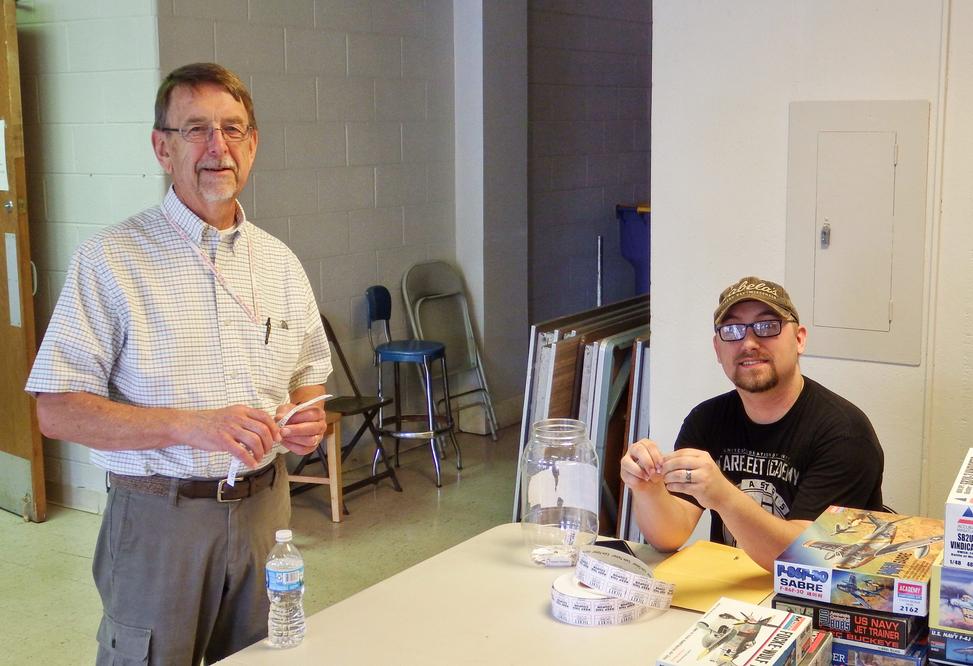 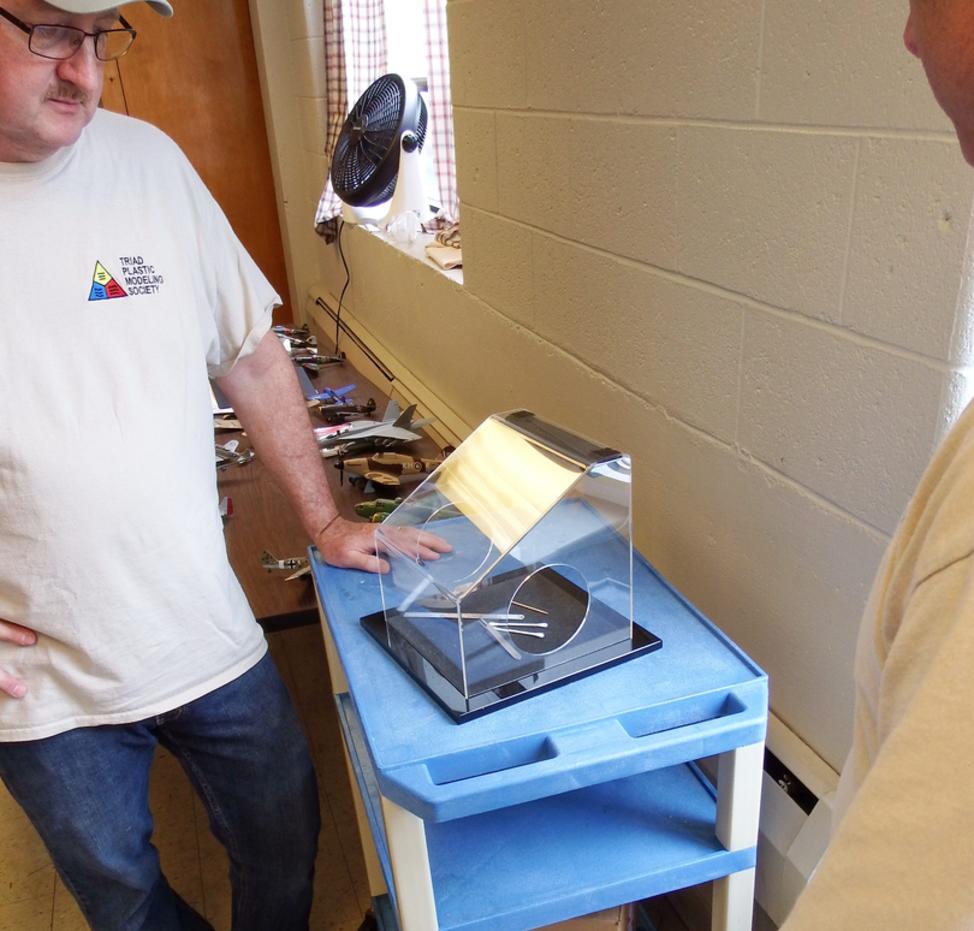 That blue SU-33 was Michael Novasad’s winning entry.  That guy is good!!

Our thanks go out to Stanley Carrier who was Mr. Raffle…handling the ticket sales and the drawing.  Thanks to our members, we had a ton of kits available for the raffle.  Great job, everybody!  Here is Stan with Michael Novasad who won in the aviation category….again!