Alan Vandam showed off his custom made tire holder.  The black part in the middle is the rubber tire.  He places the shaft in a motor tool and spins it against sandpaper to remove flash, etc.  Alan has mastered the circle template.  He uses them to paint around wheels and other round things!  Alan is holding a Prop Master...it is a jig for holding the individual props for accurate gluing to the hub.  They come in 3 and 4 prop designs and different scales.  It is a simple idea but it works...as you remove parts from the sprue, keep cutting off the excess runners.  Saves space and easier to find the remaining parts.  He also like G-S Hypo Cement for gluing parts, e.g. clear parts.  It won’t fog the clear parts like CA will.  Cures in 5-6 minutes.

Skill level 1.55 had two tips…use quart and gallon Ziploc bags to store stuff.  You can see what is inside and they take up a lot less space.  He also recommends belonging to TRAID as you can learn from ALL of their mistakes…  Ooooh…that hurt!  ;-)
Here is a parting shot.  See at the June S&T! 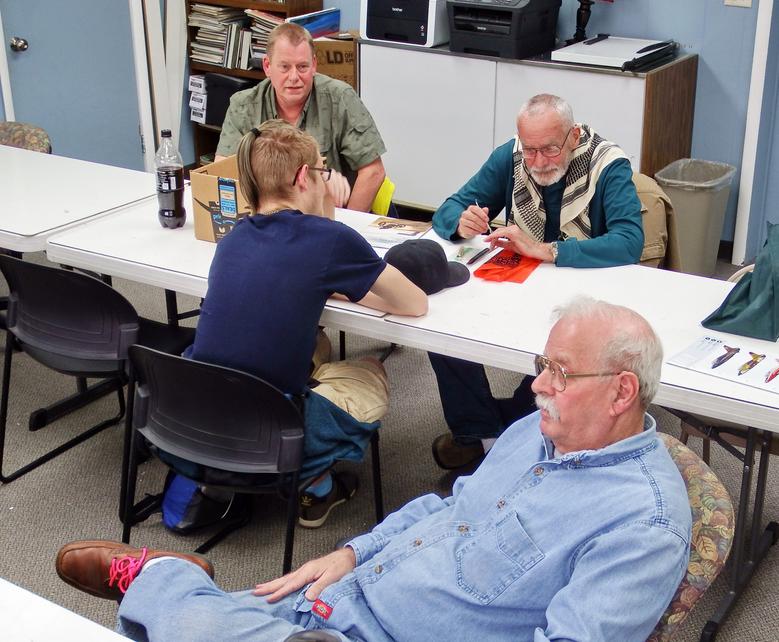 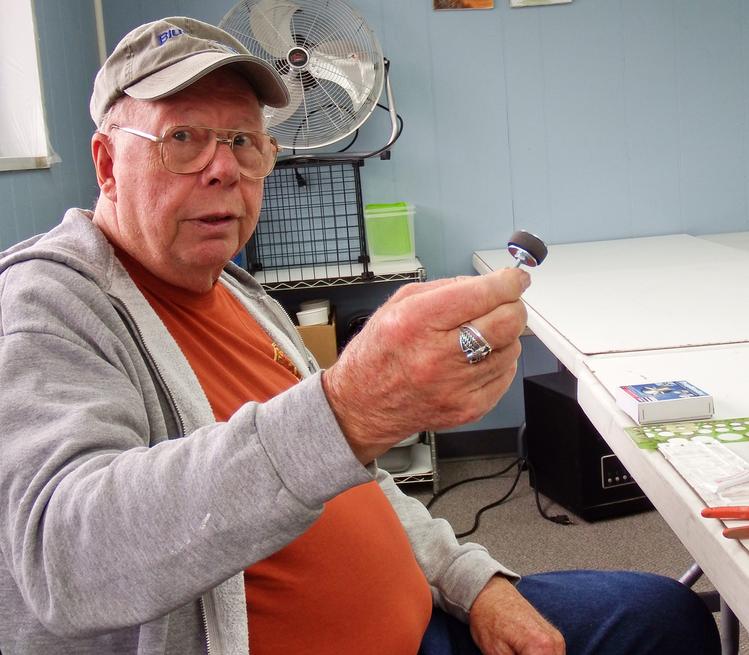 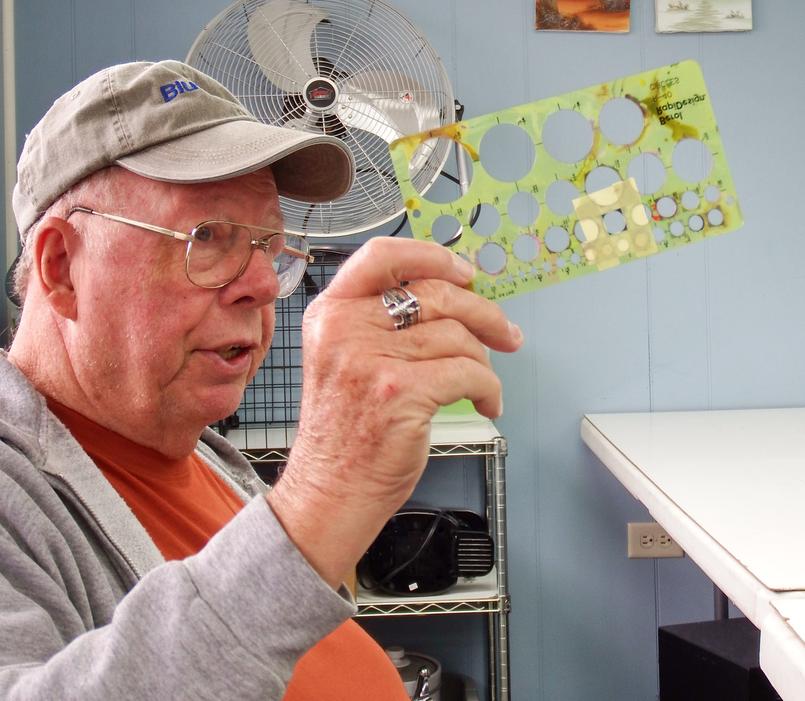 Scratchbuilder Burggren, showed off his aluminum plates to which he has taped down colored paper and then lays down his part dimensions and any required bending jigs. He also uses old plastic prescription bottles to hold left over small pieces of plastic to use on future projects…why throw them away?  He also uses index cards to write down each step, in order, for various aspects of his project.  Humm…attach the instrument panel decals before gluing the fuselage halves together….. 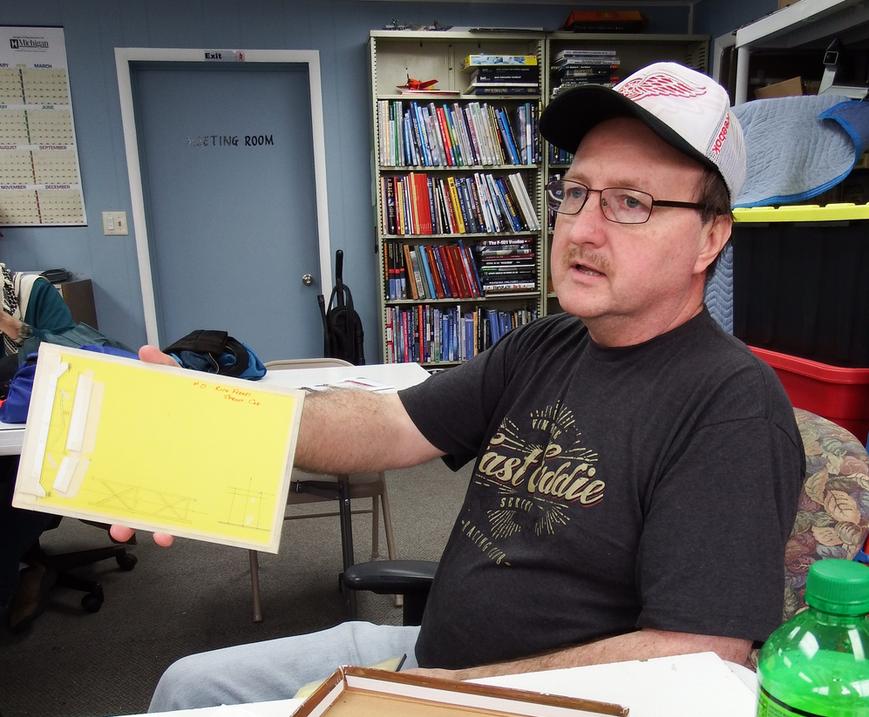 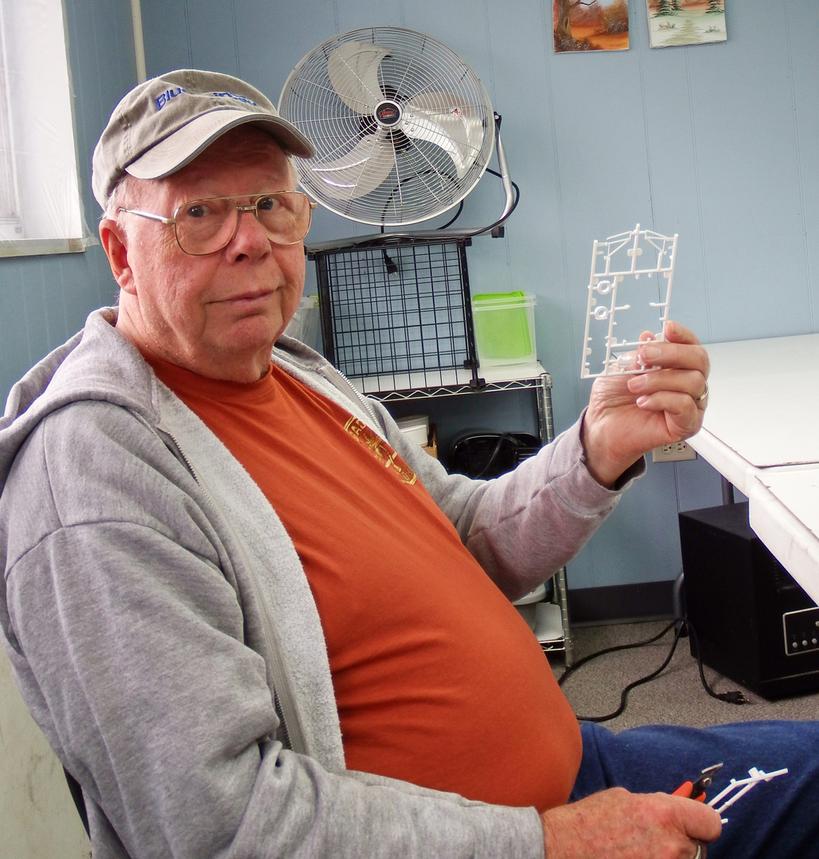 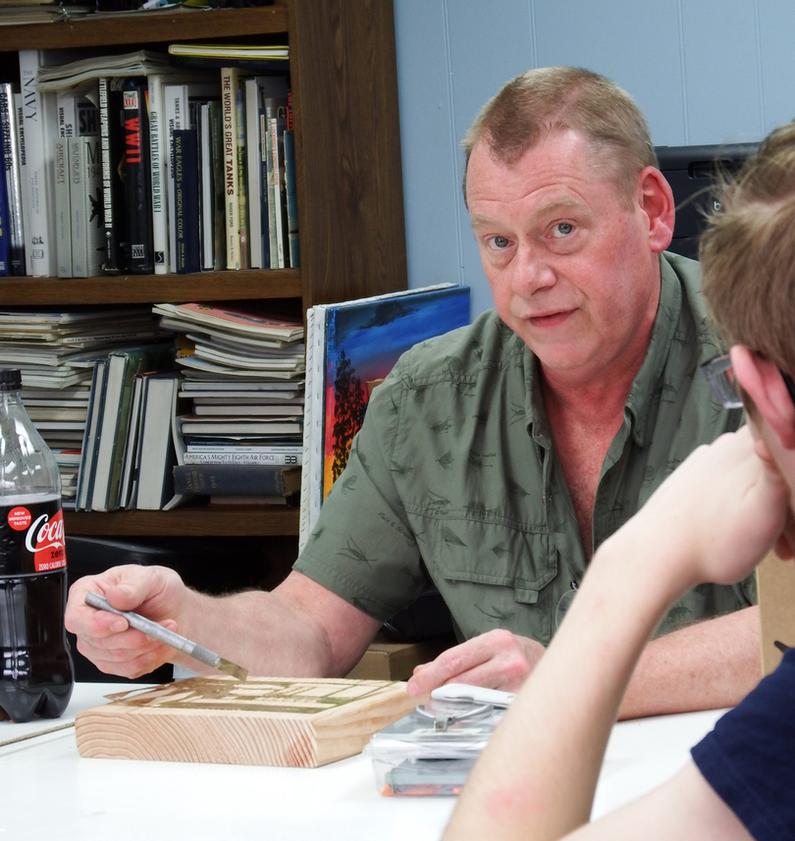 While we are on the subject of cutting PE, Dale Younker suggests placing your PE inside a sandwich bag and then cutting them…the bag holds them so they can’t be launched.  Dale likes to use what he calls pin oilers which are squeeze bottles with find needle tips.  They are great for many liquids and offer great control…I love ‘em!  Next time you’re at the dentist, ask if you can have a couple of old dental picks…they make great scribes…you may have to grind the end to resharpen the point. He recommends self-locking forceps.  Besides clamping, you can attach them to things, e.g. string, so that the string hangs down.    Cool!  Sorry, none of Dale's photos turned out....  Wait a minute...is this a good thing????  ;-) 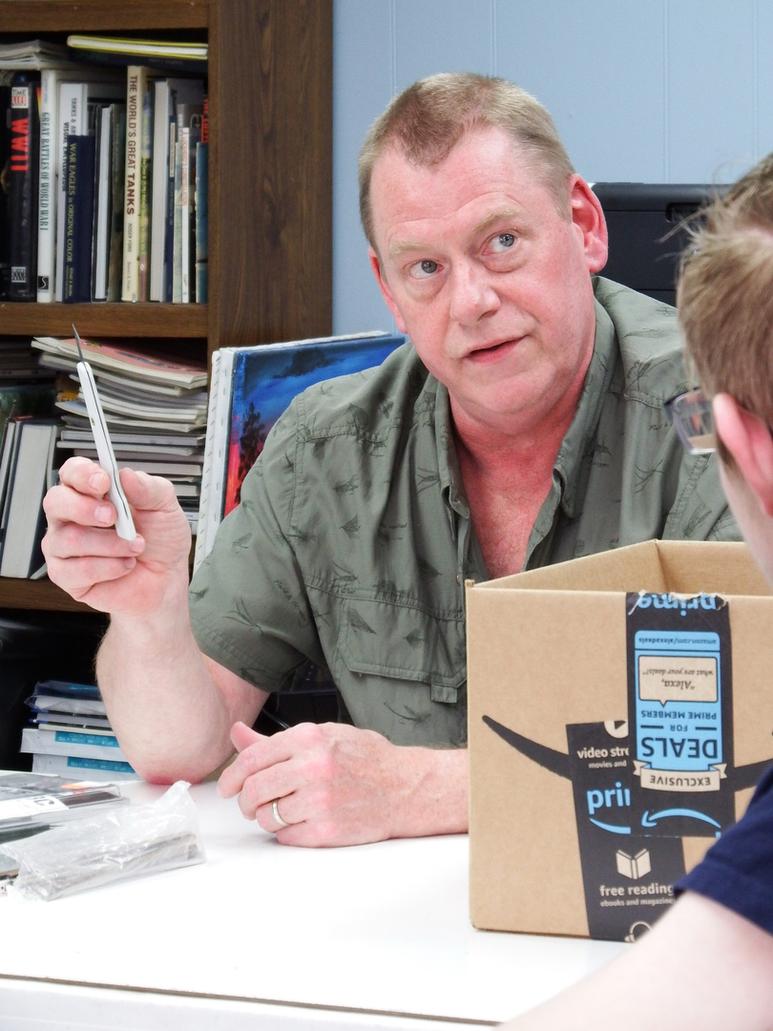 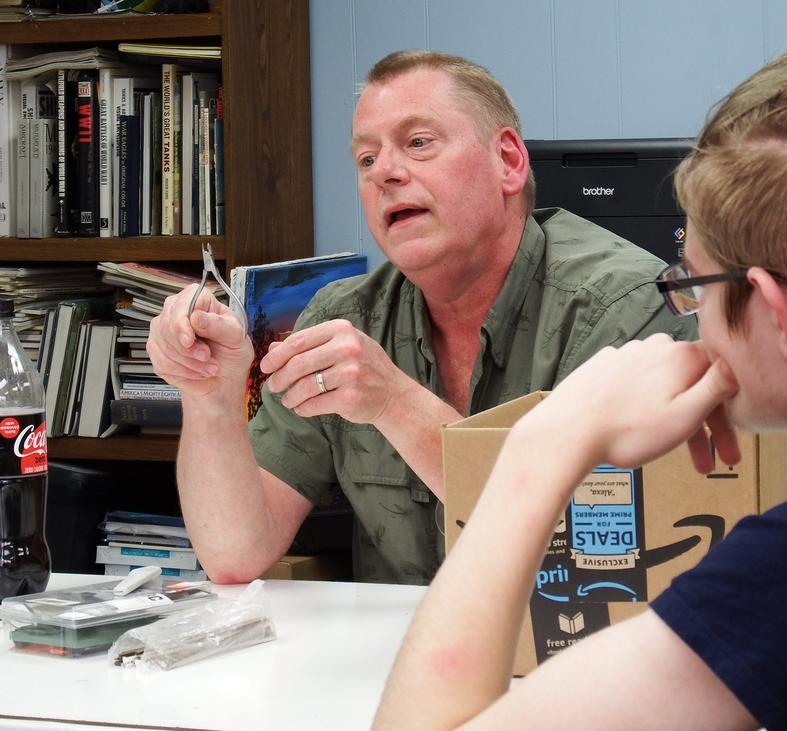 We’ll jump right into tips and tools.  Just so you know, not all the photos I took turned out.  Prof. Leger showed off several tools and techniques for creating curves…and compound curves, in plastic strip.  You can see the balls and hammer on the table.  This will come in handy for the planking on his ship model.  He also recommends modeling clay for temporarily attaching or holding parts together.  Thanks, Bill…good stuff! 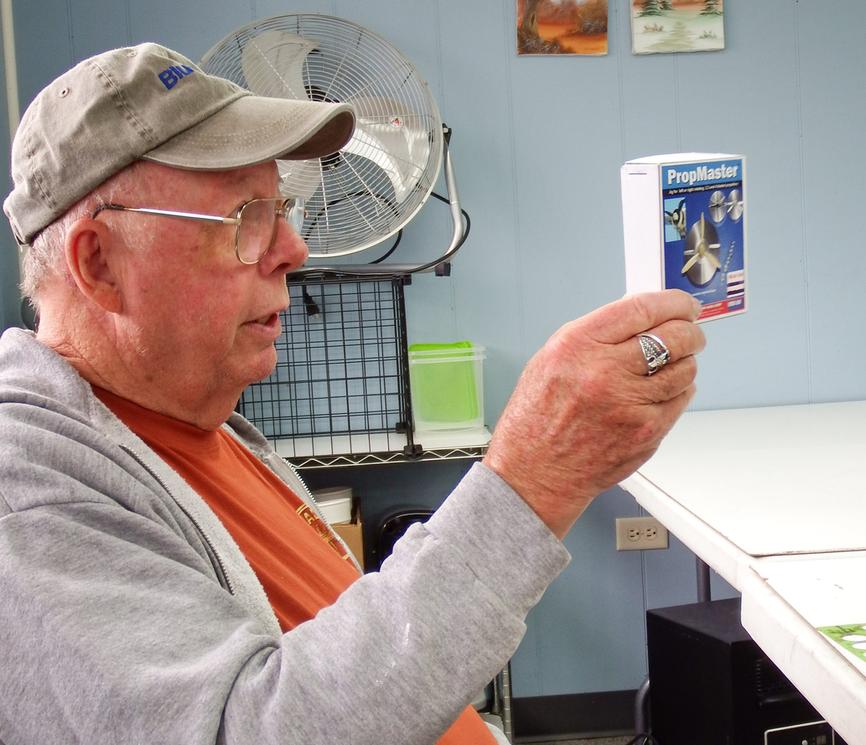 Doug Seekman had plenty of suggestions:
-A Mission Models PE bender.
-Using a wet board and a chisel blade to cut PE of the sprue.  The moisture helps hold the tiny parts in place.
-Use reamers to open up holes…he had some tiny ones!
-He loves sanding “twigs” and reminds us that you can cut them to expose a new fresh sanding edge.
-He is holding an Olfa cutter which, with the correct blade, will cut through plastic without leaving raised edges as a #11 hobby knife will do.
-A cuticle trimmer for cutting small parts.  This was going well until he gave us a demonstration on how he uses them to cut his toenails.  Gross!! 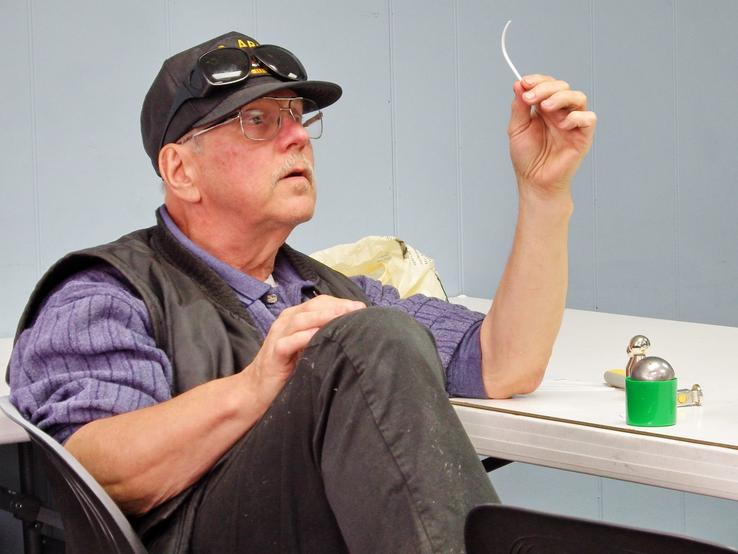