​See ya at the August Work Session! 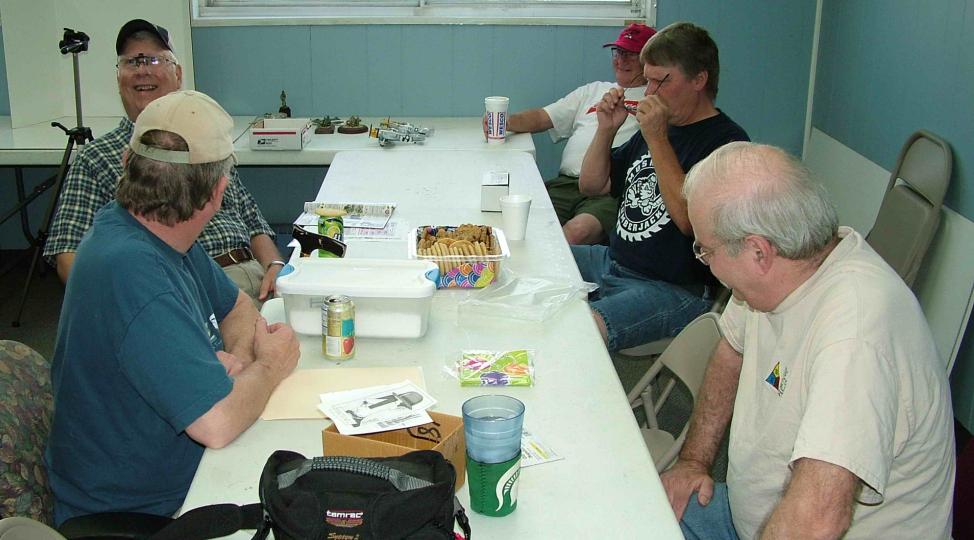 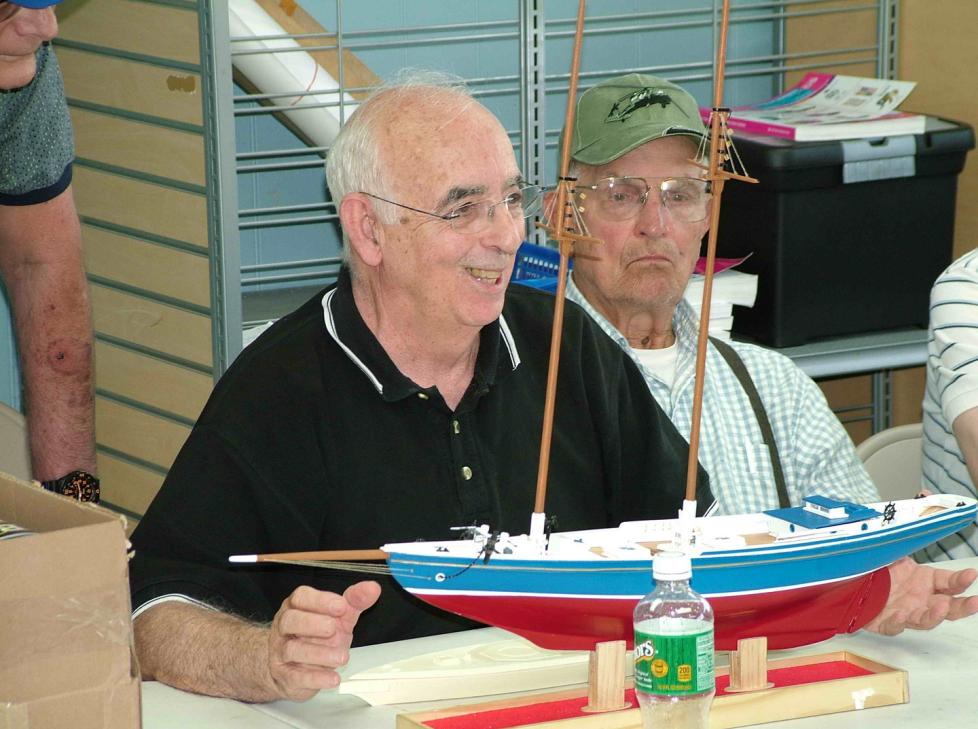 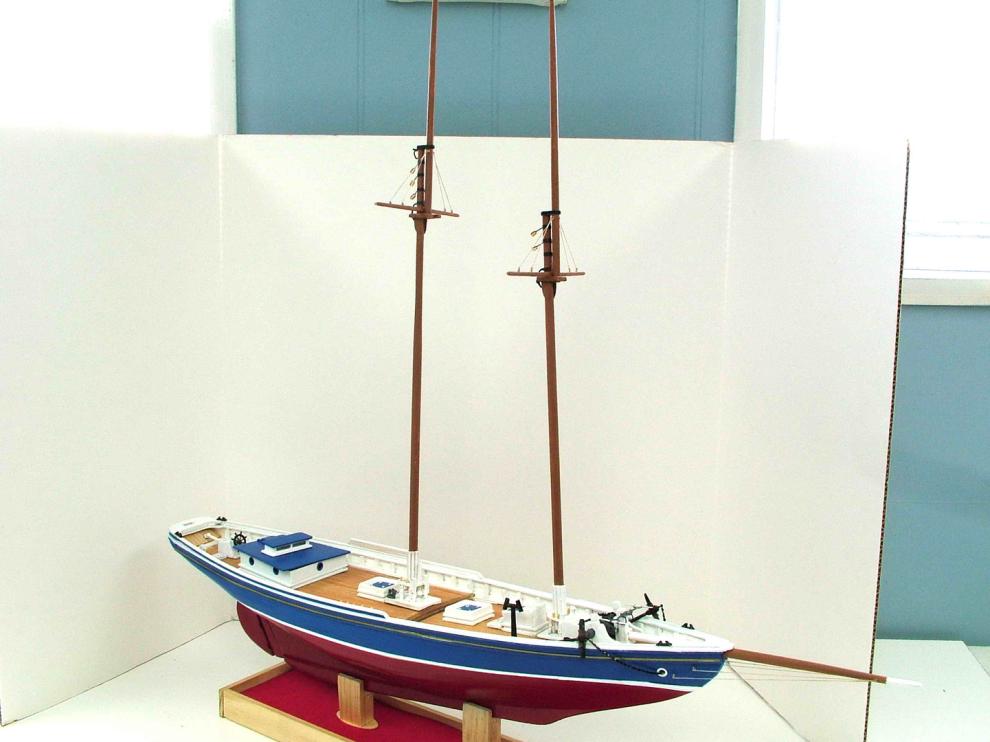 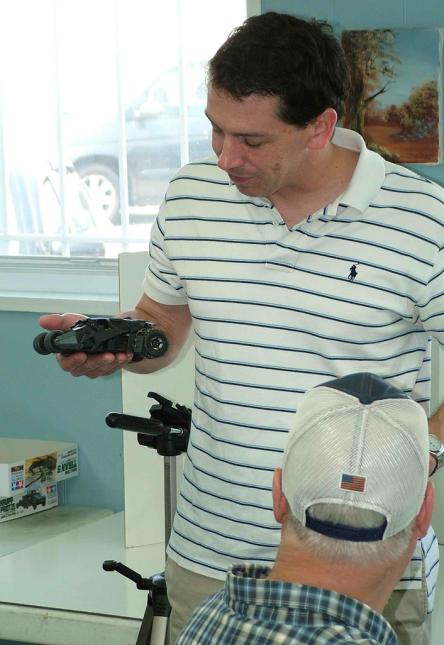 What was Jerry thinking?  I guess he was just young and foolish.  Twenty years ago, Jerry built this spectacular model of a captured Israeli T-55 (TI-67).  He added a ton of extras.  What’s weird?  It’s a Lindberg kit!  What’s that old saying…silk purse from a sow’s ear? 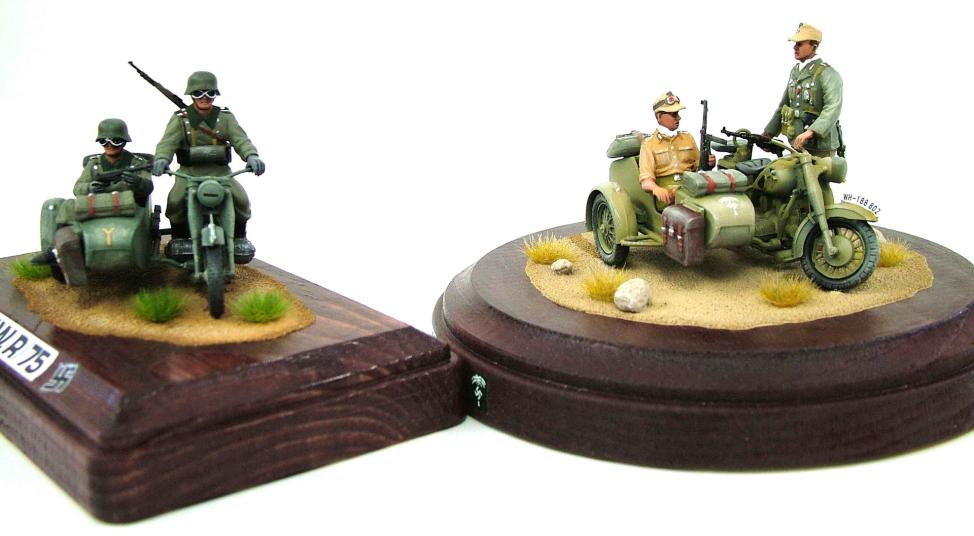 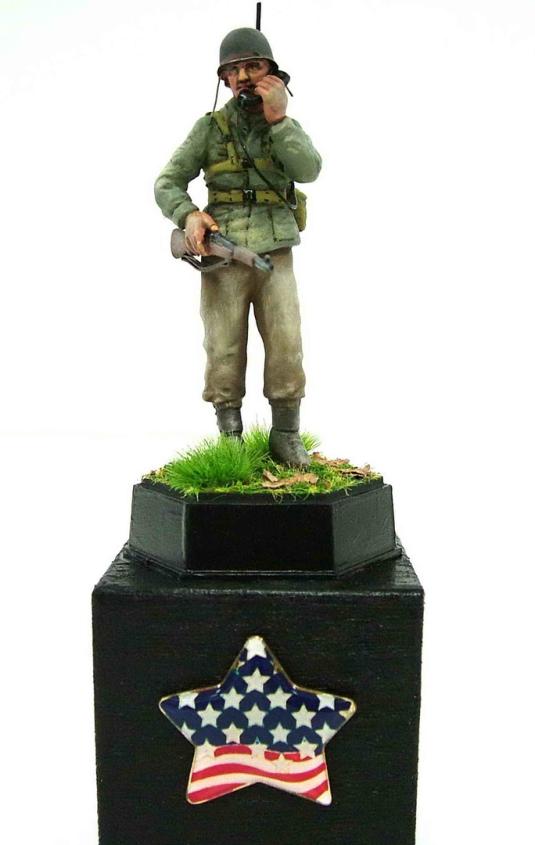 N scale model railroader and model builder Dan Tyler was back.  He brought in three tiny U.S. military vehicles…two are M-113 APC’s and the other a Paladin.  Really cool models.

Albert George has discovered photo etch.  Here are three tiny 1/160 models.  The grader is a GHQ metal kit and the baggage cart and motorcycle are PE from Micron.  Look at the fuzzy penny to get an idea of how tiny these models are.  Now, I’m not saying Al’s Show & Tells are boring, but in the second photo we see that he has nearly put himself to sleep!  ;-)  Nice work, Al! 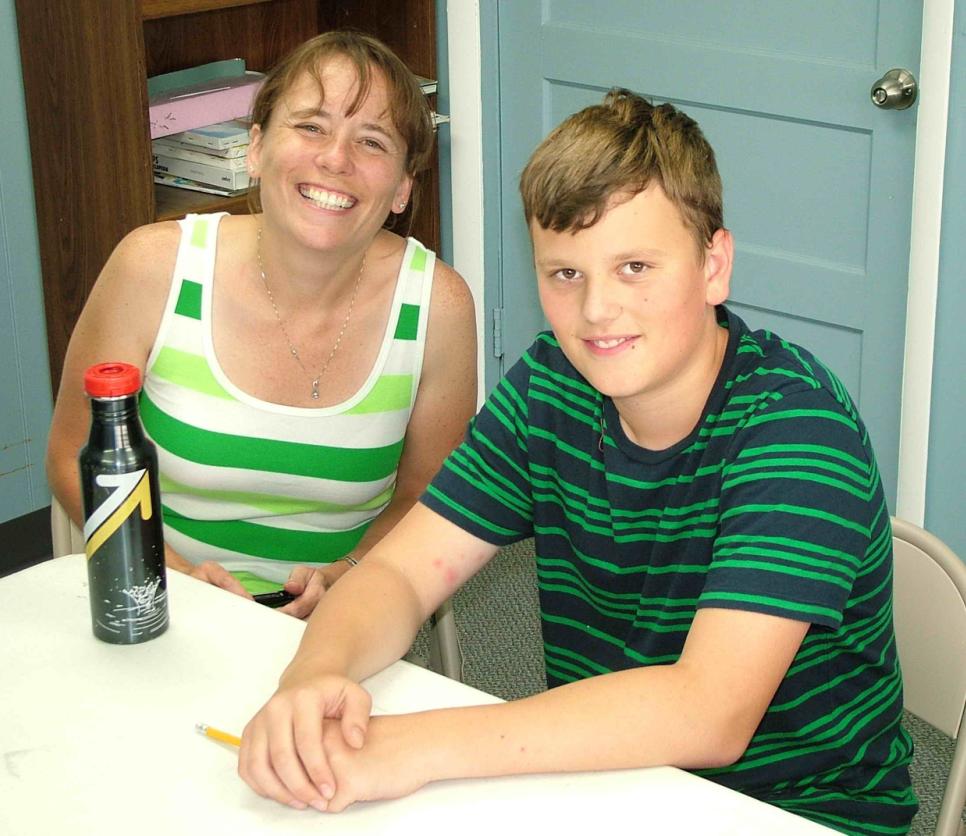 Brad Hicks brought in two superb models.  I was impressed.  Great detail, great paint job, great weathering.  Wow!  Both models are of Israeli tanks.  The Sherman is a M51 Isreaki (Sherman M4A1).  The tank was upgraded with a 105 mm gun.  Brad has this decaled for Ariel Sharon’s famed “Bison” Division, Six Day War, June 1967.  The captured T-55 is a Tiran-5 which was captured during the Six Day War.  Brad has advanced to the upper tiers of modeling: raw umber wash, dry brushing, Tamiya weathering master, etc.  Take ‘em to K-Zoo, Brad! 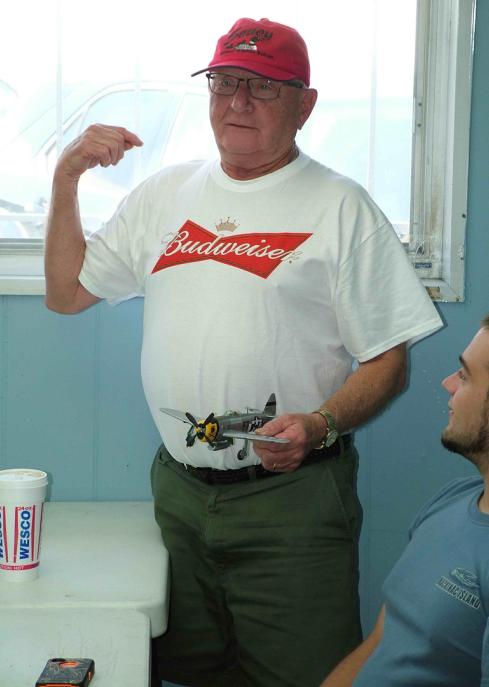 Let’s start with the birthday boy…Feller Dewitt.  It’s always great to see Feller but it was even better to see all those cookies he brought in!  ;-)  Happy Birthday, Feller, and thanks for the cookies.  Feller brought in two 1/48 models of WWII planes flown by Major Glenn Eagleston.  He first flew the P-47 and then migrated to the P-51.  The Thunderbolt is a Hobby Boss kit and the Mustang is the Tamiya kit.  He used Superscale Decals.  The Tamiya kit was wonderful; so was the Hobby Boss kit…just less so!  Great job, Feller! 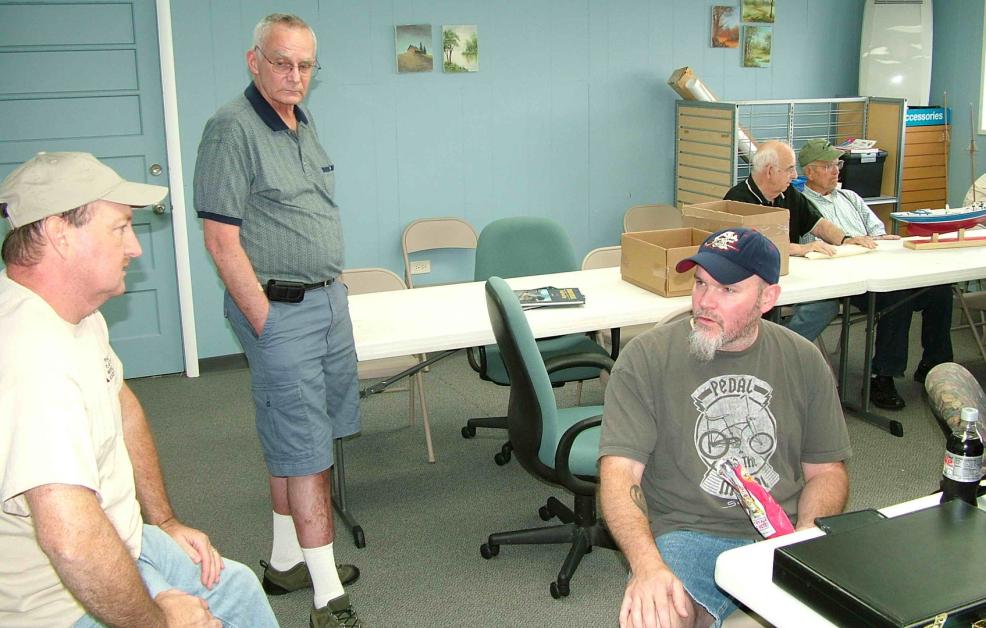 OK, let’s wrap up with a few choice photos.  It was a great turnout of members and models!

Francisco Alvarez has made outstanding progress on his fishing ship…the name of which will be announced later…the name S.S. Chuck is in the running!  He is waiting for his daughter to sew the many sails required before he can continue.  He also has the prop/screw to complete.  Looks amazing! 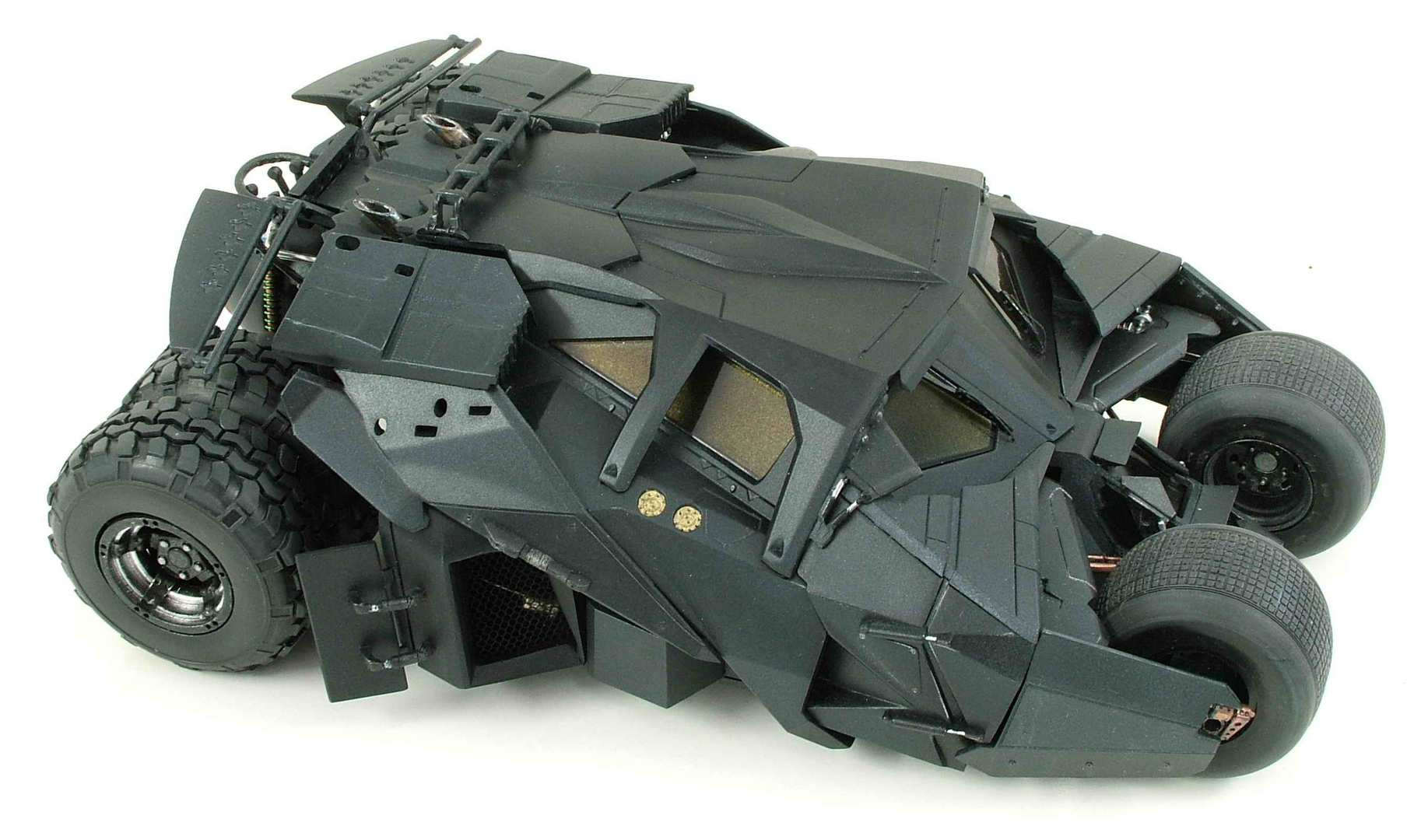 Rob Sheffer brought in the latest Batmobile skillfully crafted from the Moebius kit.  He used mostly Alclad paint on the inside and out.  It isn’t quite finished but you’ll see it again at K-Zoo, I’m sure.  Rob said it was the nicest kit he’s ever built.  Way to go Moebius!  He’s added extra details e.g. copper wire for springs and he scuffed up the tires.  Way to go, Rob!  (Just noticed...his model photographs very nicely!) 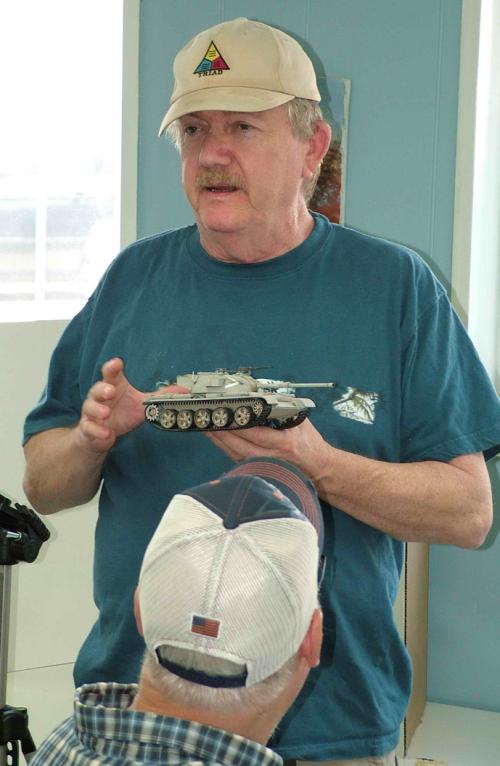 Despite his weird looking eyes, Bob Thompson sure knows how to model and paint figures.  First up is a 1/25 figure that Brad Hicks gave to Bob.  He added wire, sling, helmet straps and more.  As I wrote last time, Bob’s hand printing of the letters “US” blew me away.  Sounds like a small thing but he did it to perfection.  Next up are two Tamiya German BMW motorcycles with sidecars.  One is European theater; the other Africa.  The figures for the latter are from Tristar and the former came with the kit.  Great job, Bob! 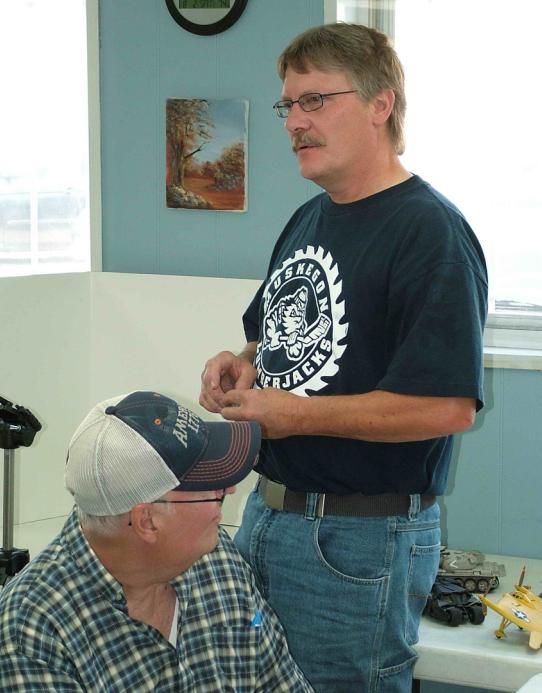 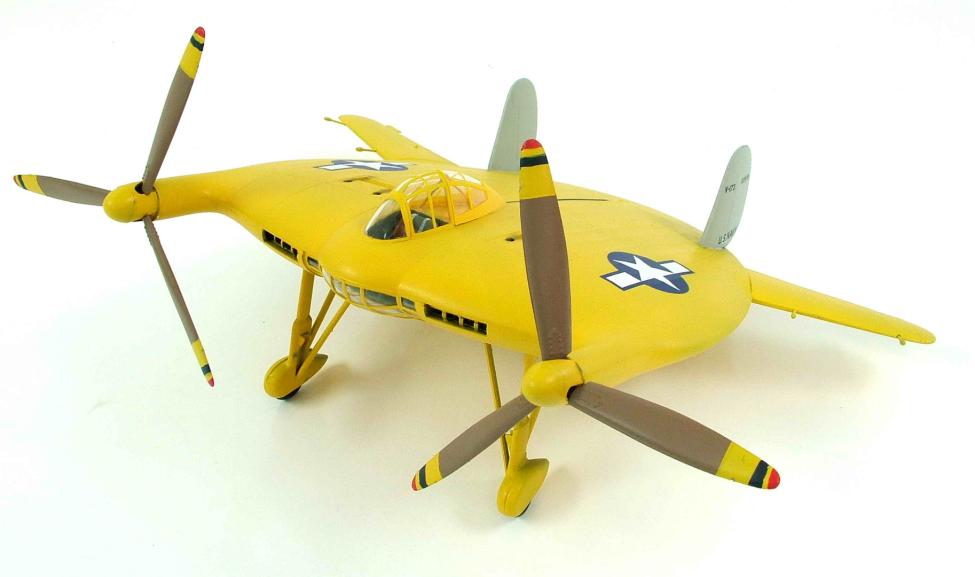 Doug Schuur brought in a model of one of the weirdest WWII aircraft ever built…a V-173 Flying Pancake.  At least one aircraft had Continental engines built in Muskegon.  Thanks, Doug!  Hope you’re feeling better soon. 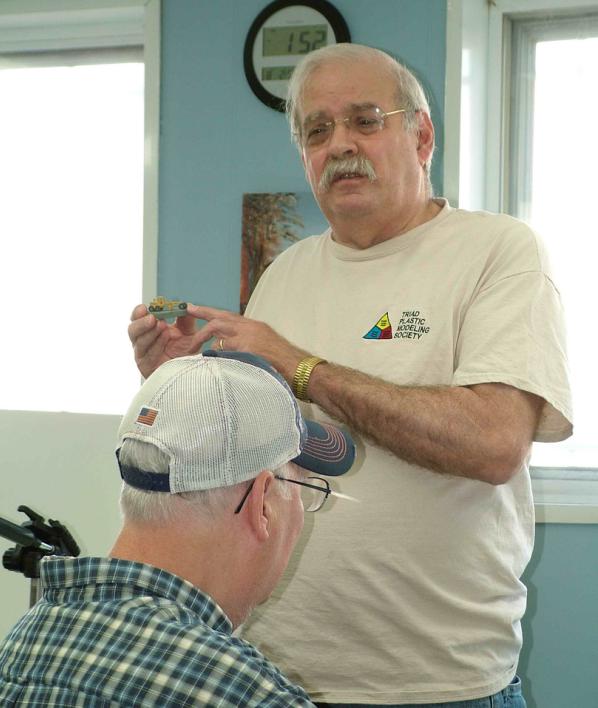 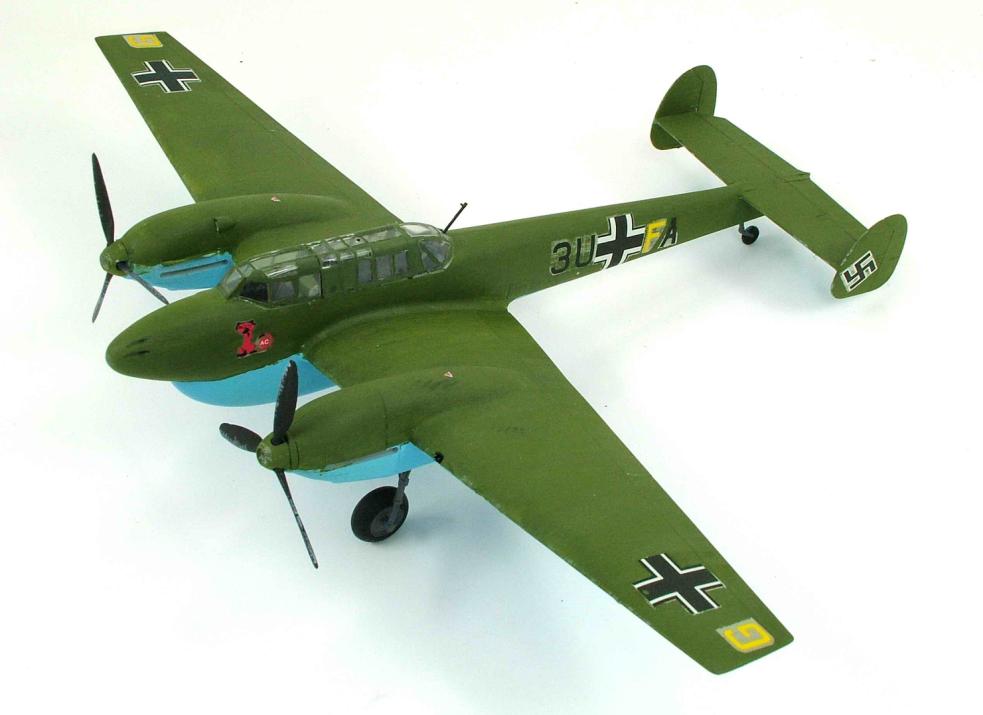 Finally, Spencer Kosc has returned…with Mom, Janel.  We thought he didn’t love us anymore!  His Dad, Matt, won the State Championship in his class in snowmobile racing.  He’s now out racing motocross.  Well, he may be crazy but at least he’s good at it!  ;-)  Talk about attention to detail…Spencer built a 1/48 Bf-110 but he took the time to attach the landing gear backwards just so it would match the way this plane looks in his online game.  When asked how he was going to blow it up, he said he was going to keep this one.  He must really like this model!  And so do we! 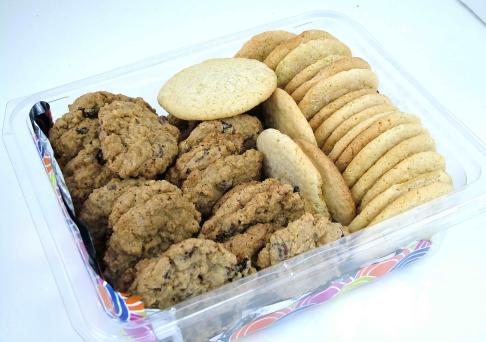