​See ya at the July Work Session! 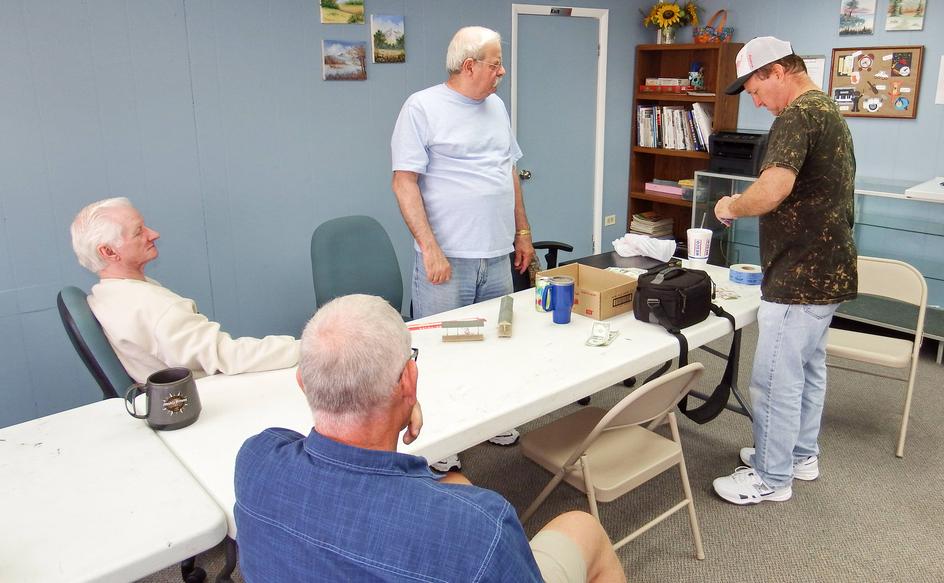 In this final shot, we see raffle tickets being sold.  As a direct result of this raffle, a new rule has been established:  Tom Bauer may purchase all the raffle tickets he wants but he is not allowed to win anymore.  Period.  We’ve had enough!  ;-) 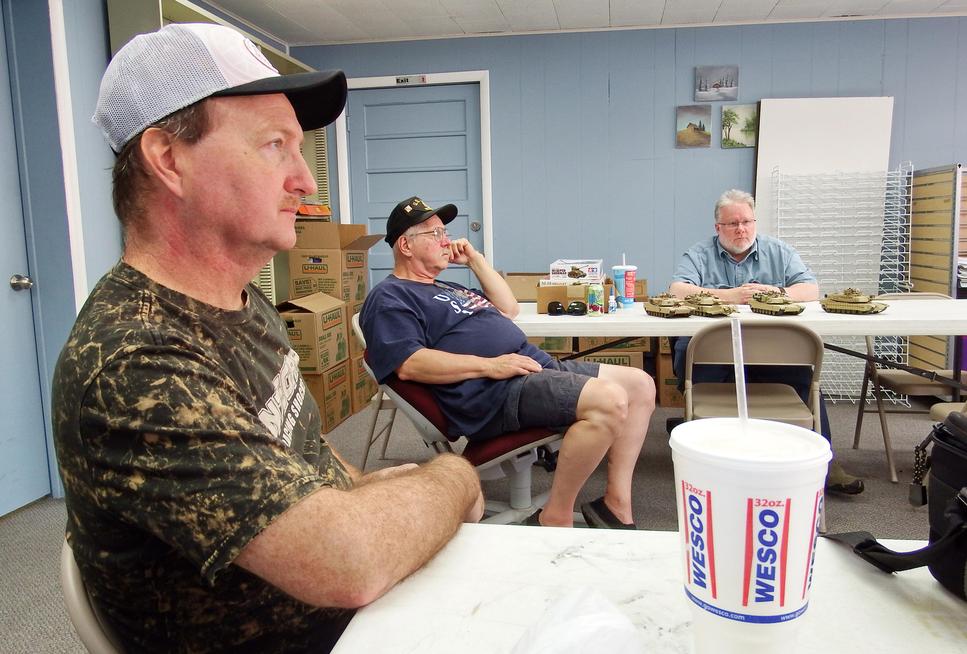 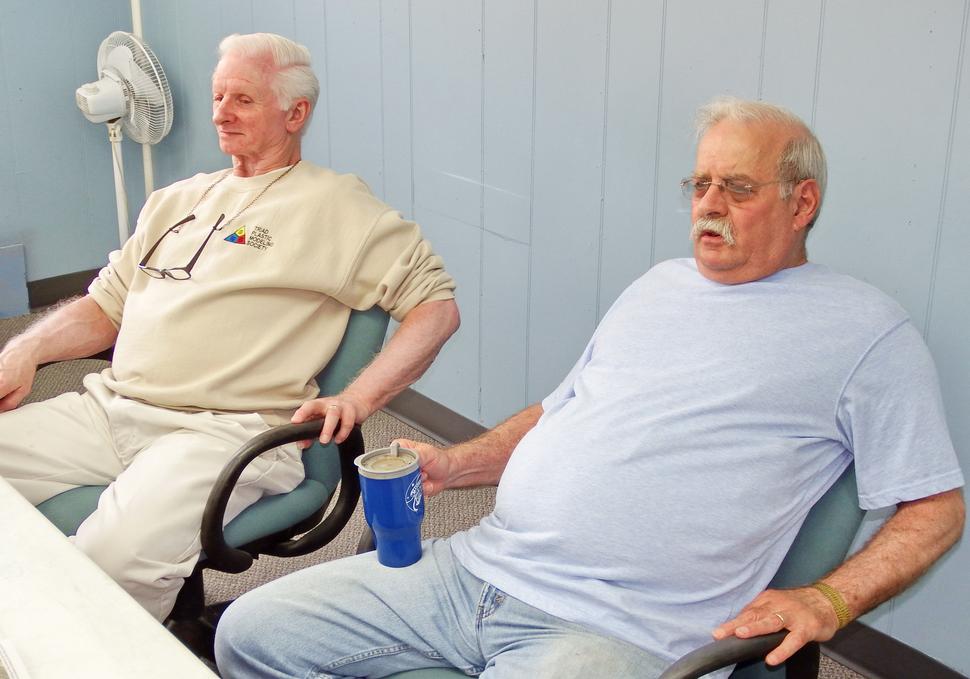 Here are two shots of the guys having a good time on the Fourth!  Hmmm...maybe not!  ;-)

Skill level 1.55 brought in the two fuselage sections of the new HK Models 1/32 de Haviland Mosquito.  Note the big time use of slide mold technology….the fuselage is not split down the middle.  Just glue the two pieces together, do a little clean up, and you’re finished.  What will they think of next! 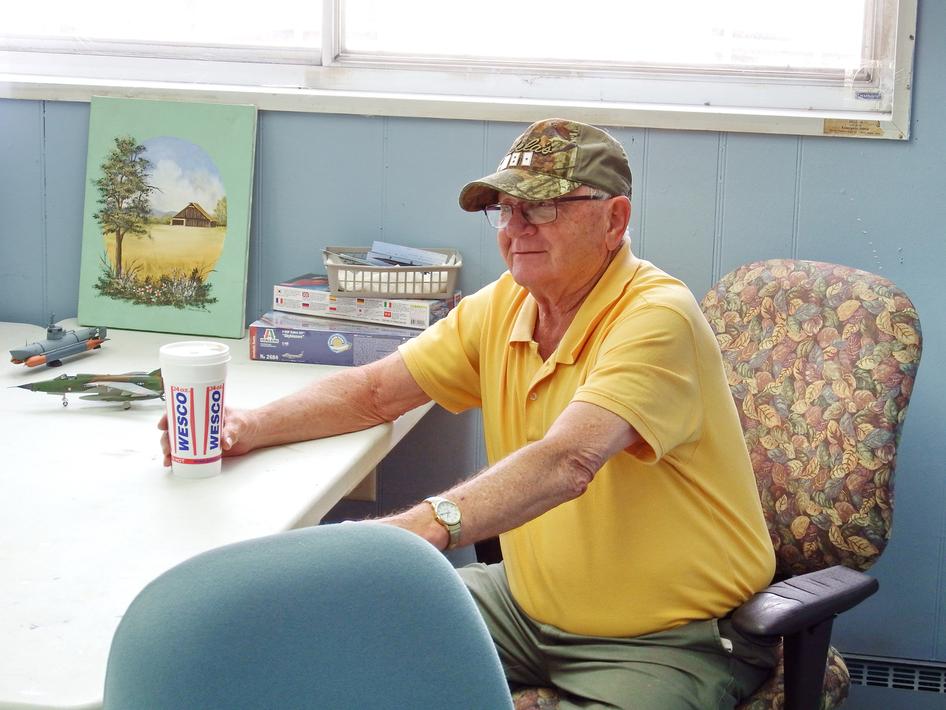 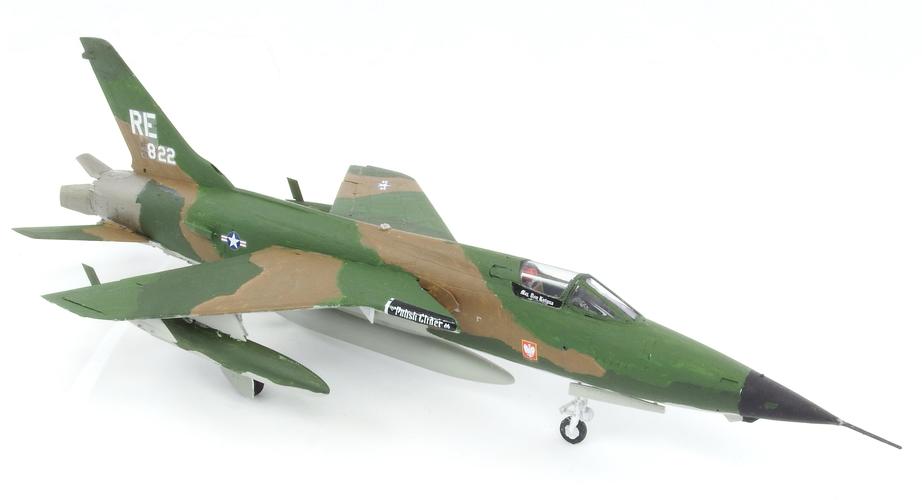 Feller Dewitt brought in a F-105D THUD…which was no dud.  He used the Trumpeter 1/72 Thunderchief kit and decals.  He hand painted with Model Master paint.  This plane was flown by a pilot of Polish descent and Feller informed us he knows one Polish word…which translates into “Yes, dear.”  Funny!  Great job, Feller! 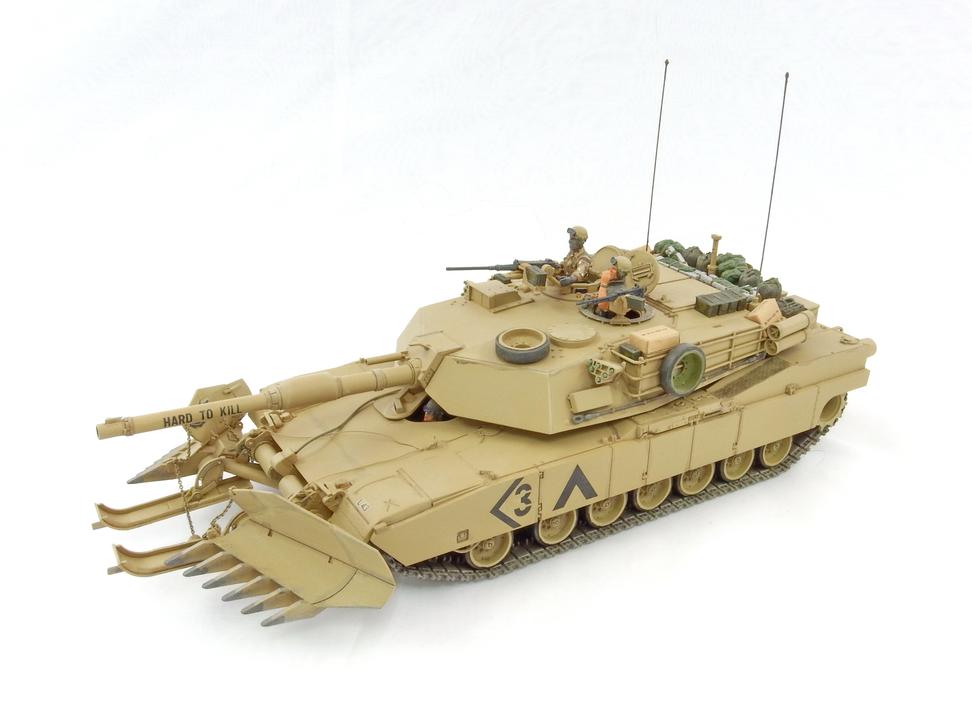 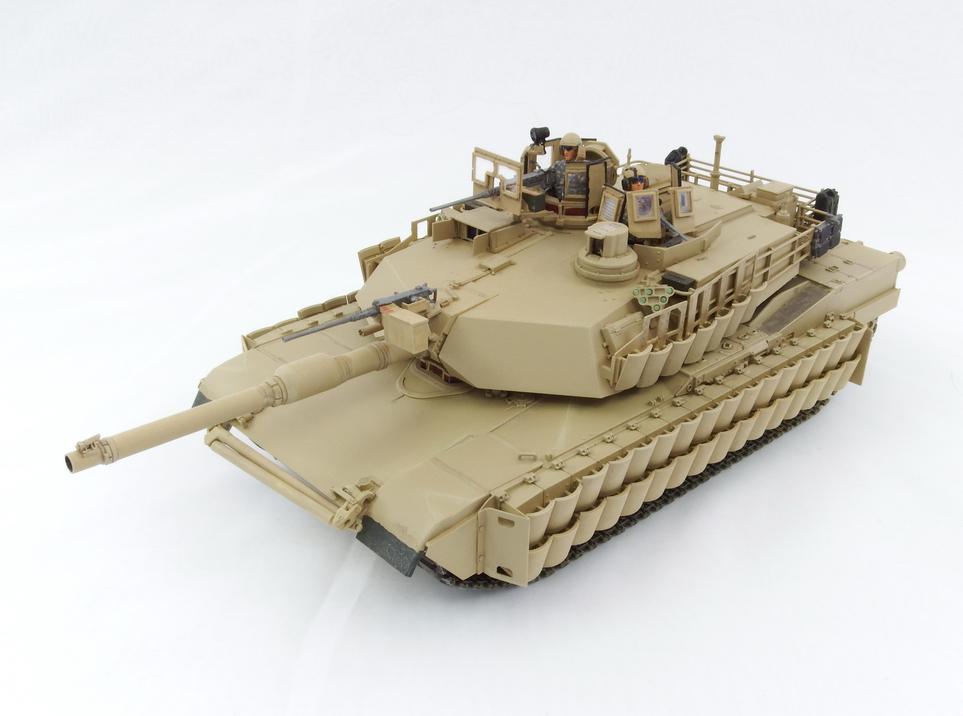 American armor guru, Brad Hicks, showed off his latest…an M1A2 SEP Abrams TUSK II main battle tank.  It is a Tamiya kit, of course, and he painted it with Model Master U.S. Army/Marine Sand and even took the time to drill out the tow brackets.  The water cans are from War Hammer.  SEP stands for System Enhancement Package and TUSK is Tank Urban Survival Kit which I guess included ARAT-I reactive armor.  The second tank, with the mine plow, he brought in earlier which is also an M1A2 tank.  Way cool, Brad! 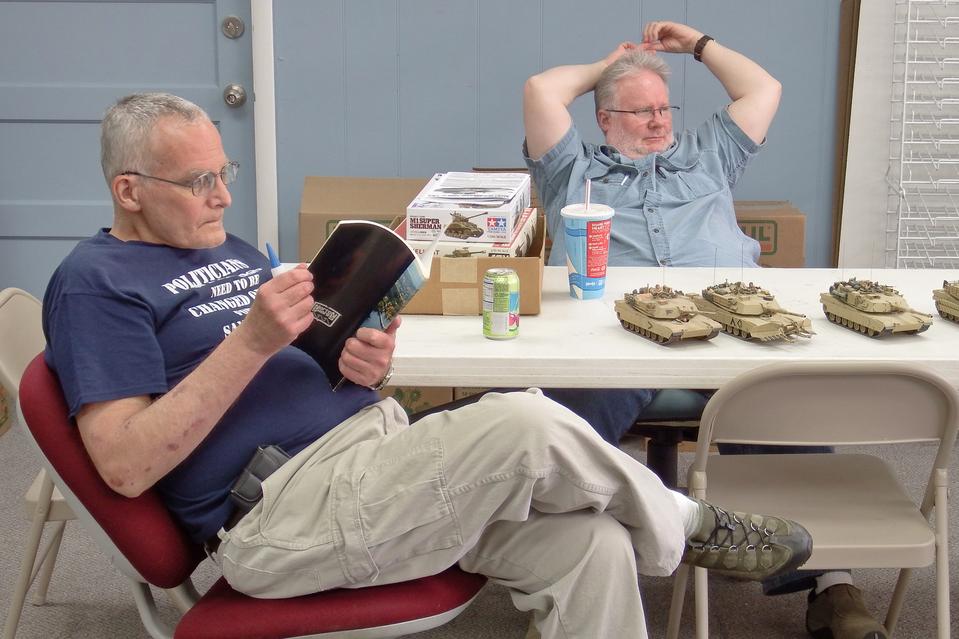 For the first time since his return to the Muskegon area, Dale Yonkers showed off a model…and it is a beautiful Verlinden 1/35 German WWII Type 127 one man sub.  The real ones were about 26’ long.  This was a resin kit and Verlinden had to send new torpedo parts as the original resin parts would not glue together.  Nice job, Dale!  Let’s see more! 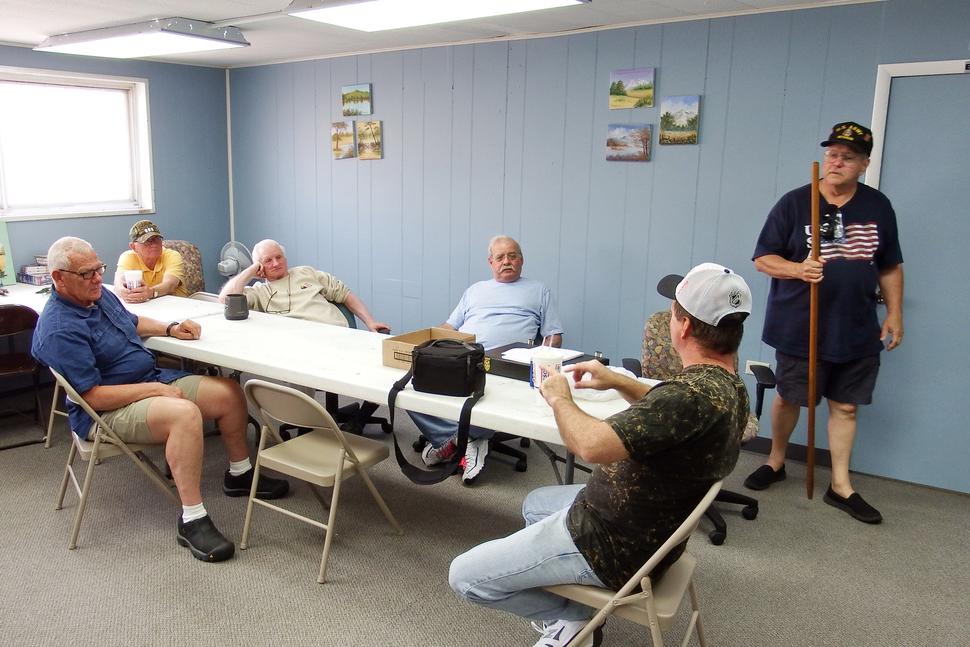 Unable to obtain a concealed weapon permit, Bill Leger decided to carry a big stick instead…and used it on Al George several times.  Amazingly, there were no witnesses to the bludgeoning…and neither were there any complaints…. ;-)