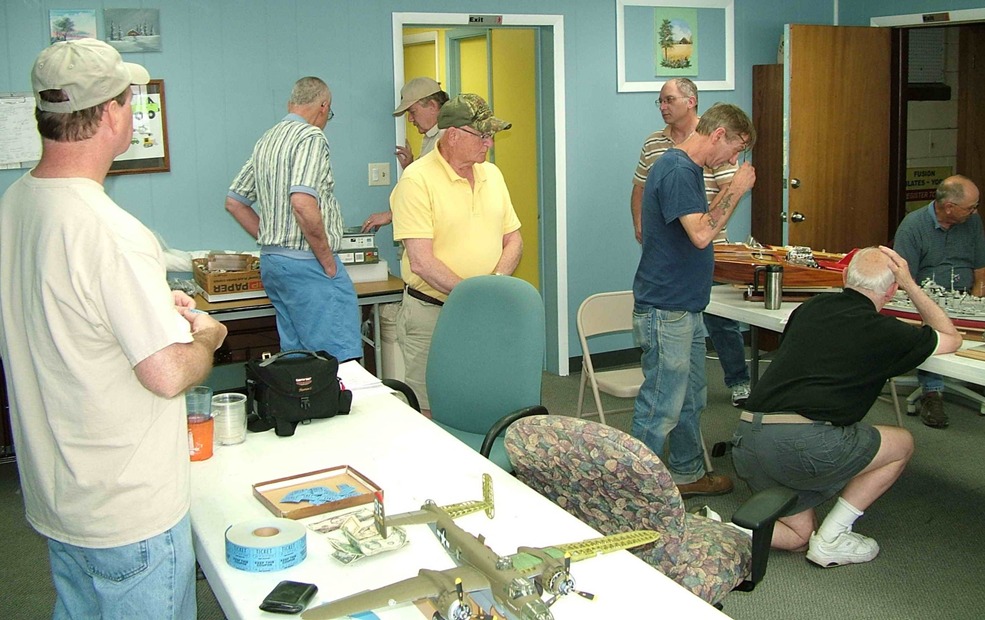 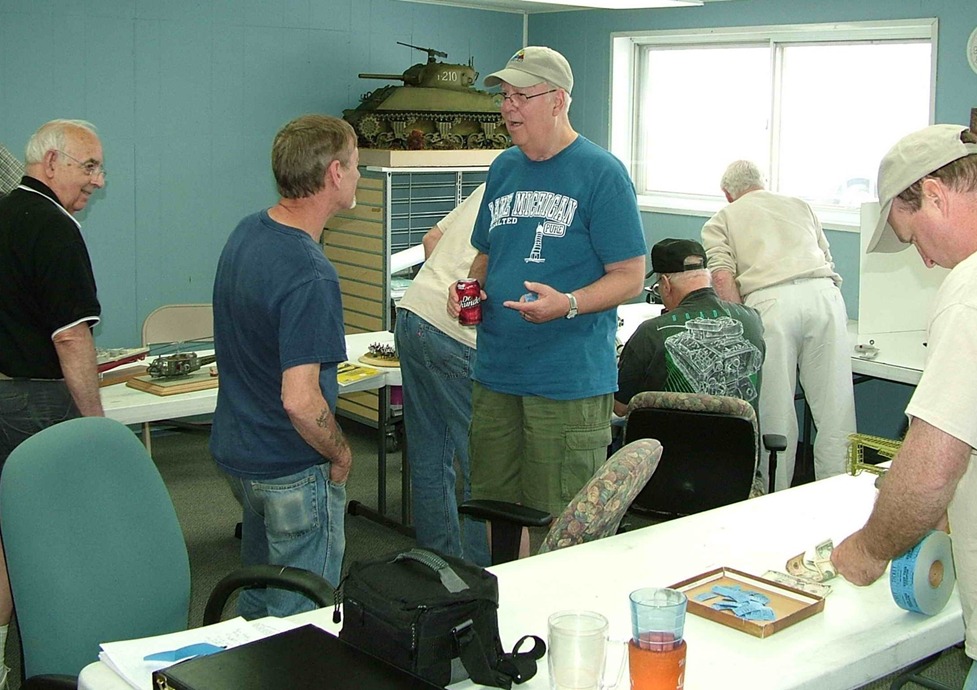 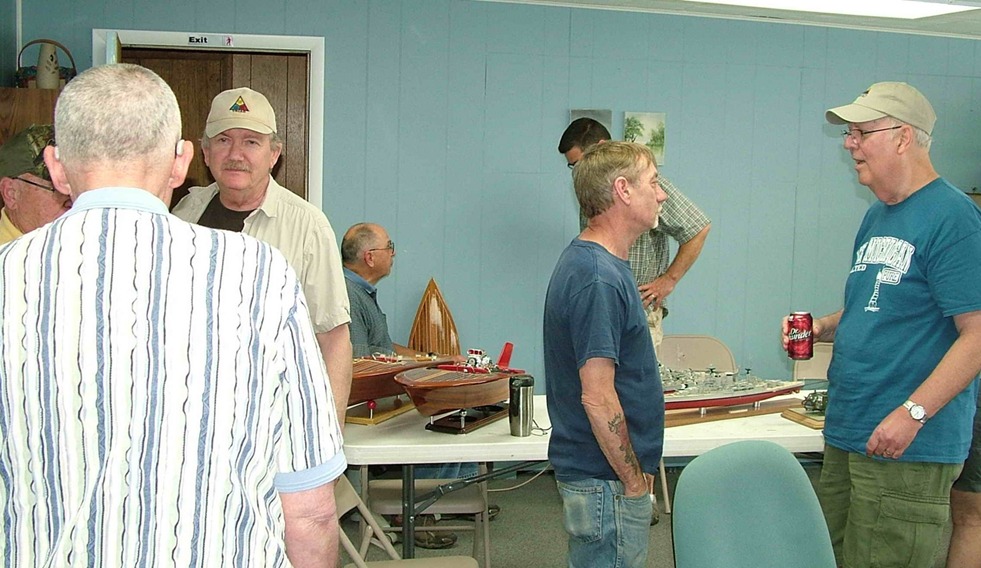 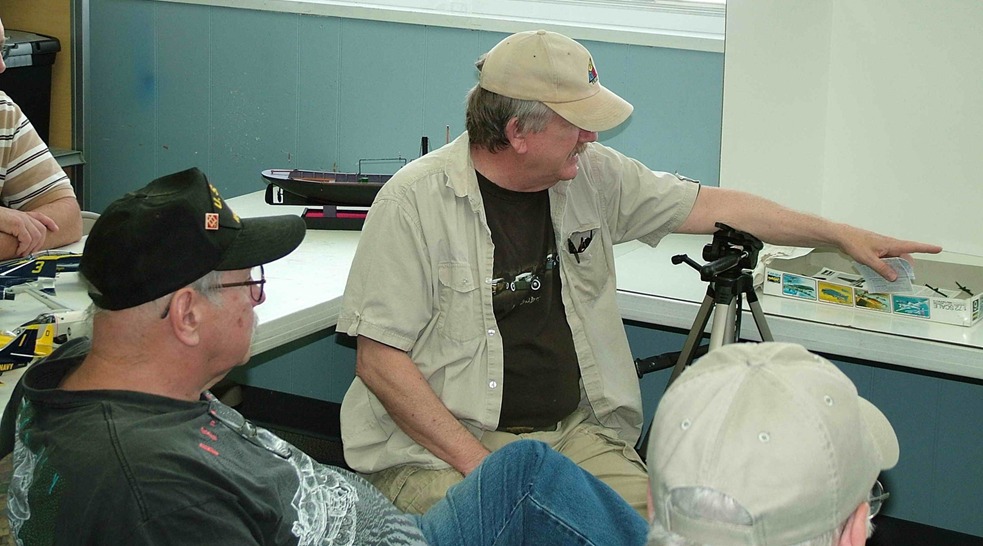 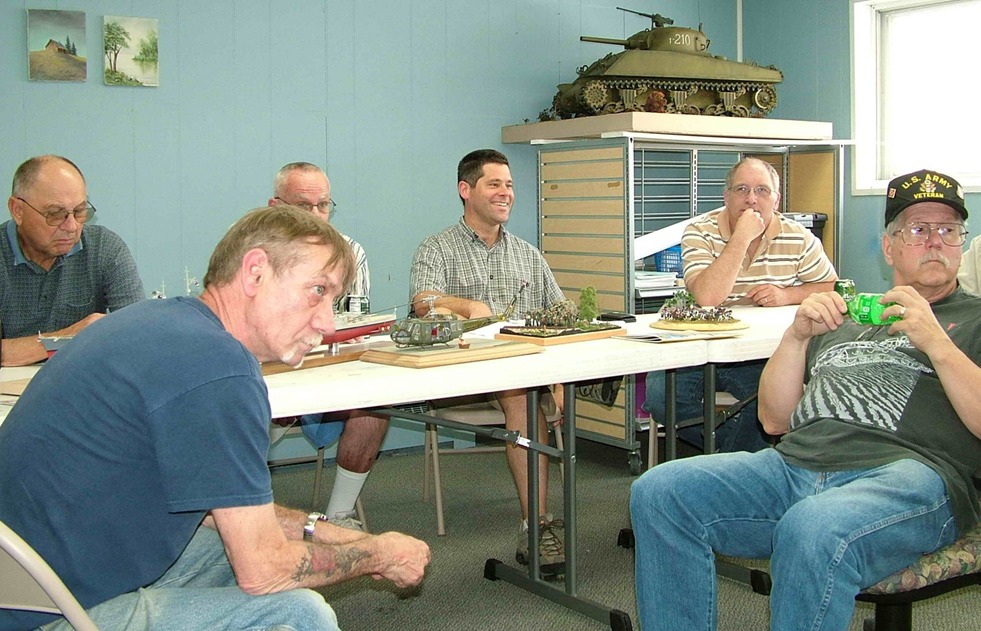 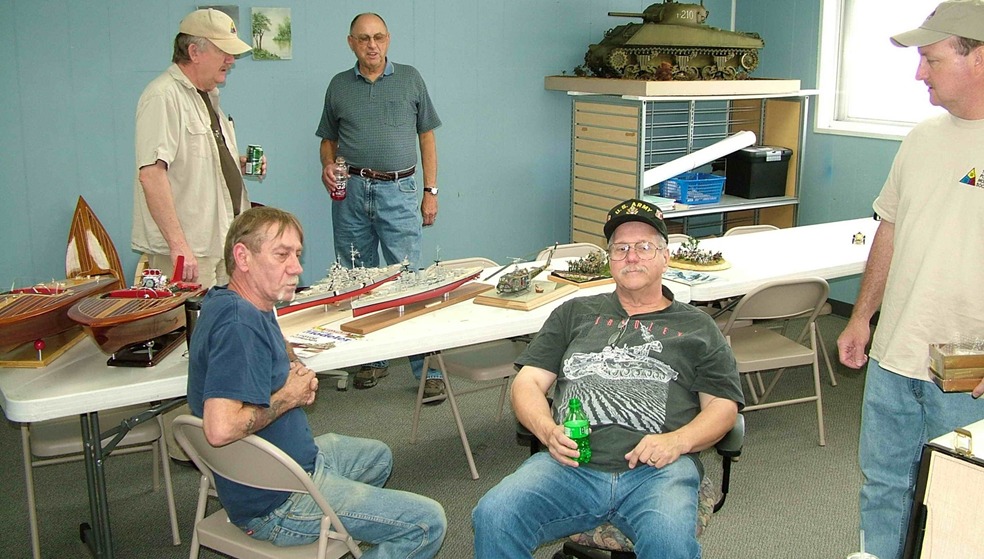 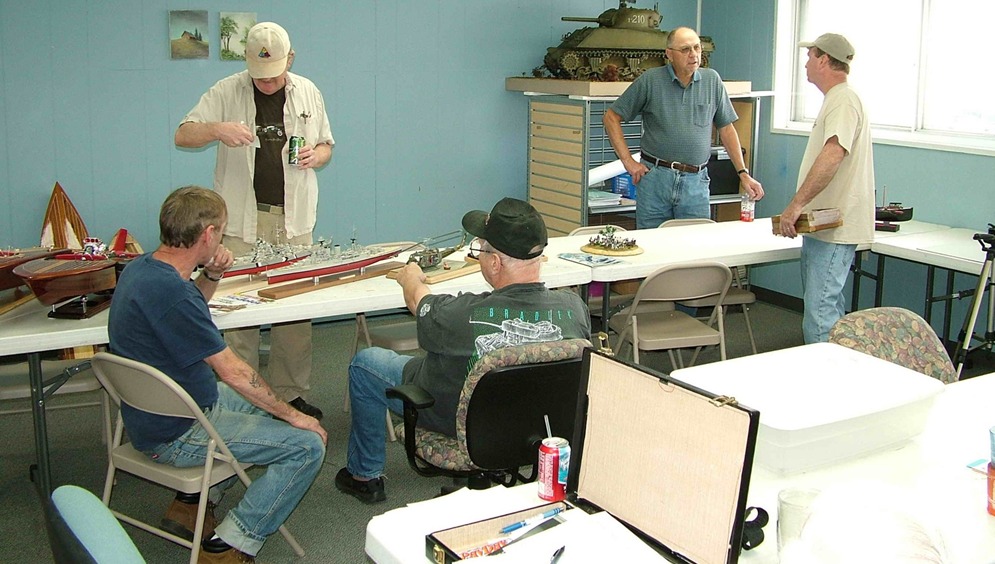 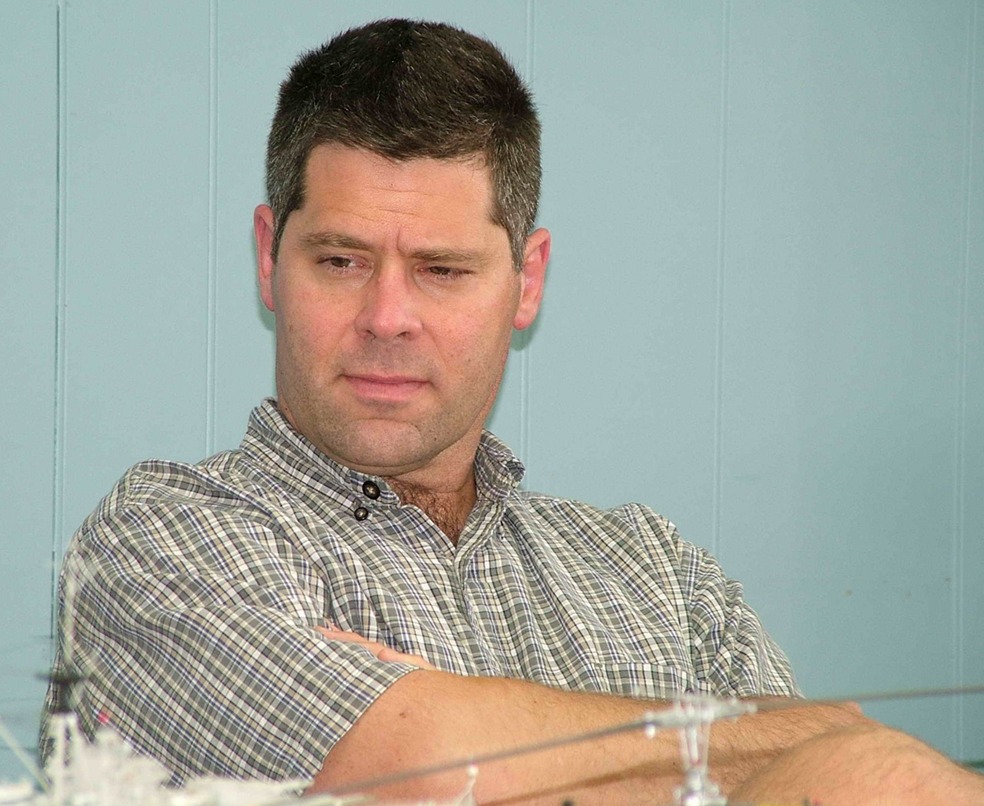 And here are some shots of the guys having fun!

Here is a shot of the GR President, Andrew DeBoer.  I think I saw him drooling a little over Dan’s ship models.  Don’t be embarrassed, Andrew…we all do it!  Thanks for joining us today! 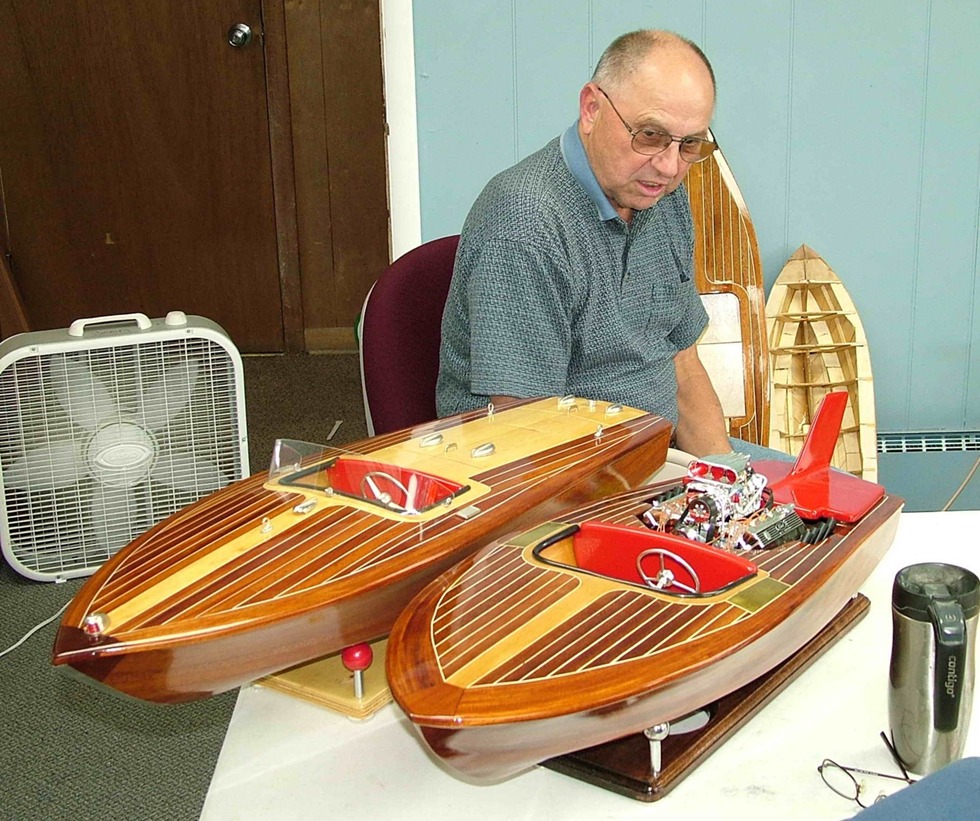 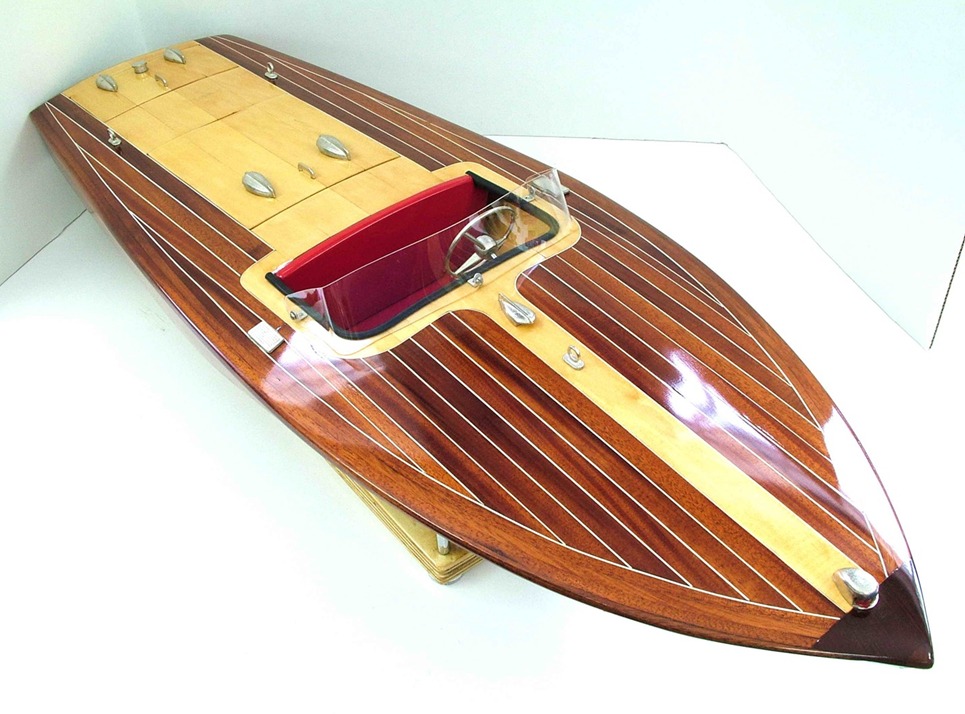 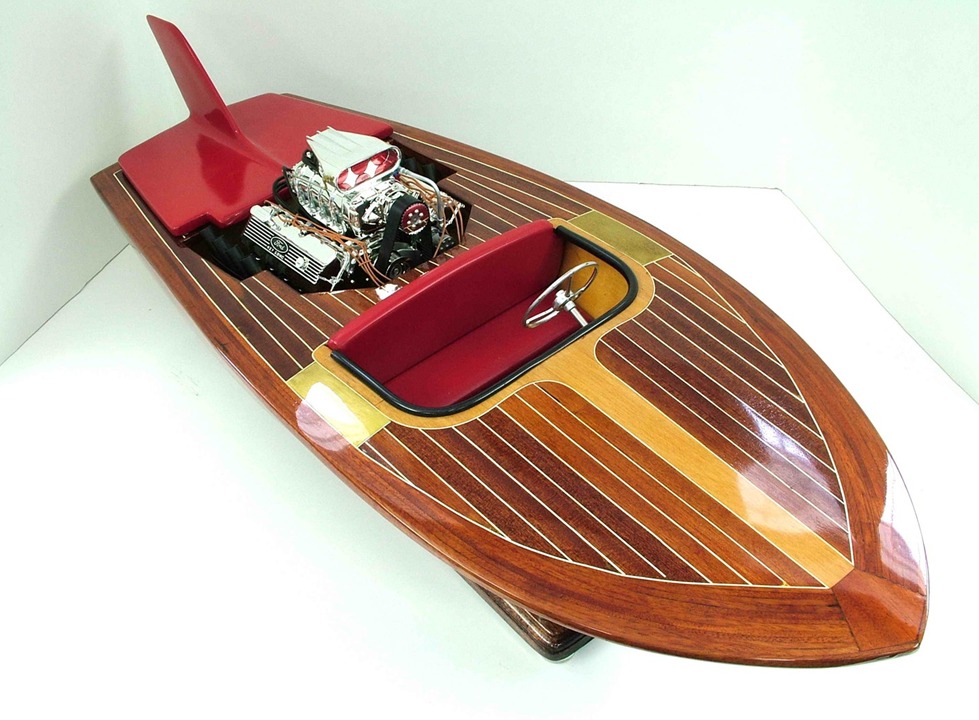 Our other wood boat guy is Roger Burley.  He brought in two beauties plus two wip boats.  The finish on these babies is just fantastic…so it is no surprise that he has sold four of these models since we last saw him!  See the gorgeous die cast engine?  Wow…this guy is good! 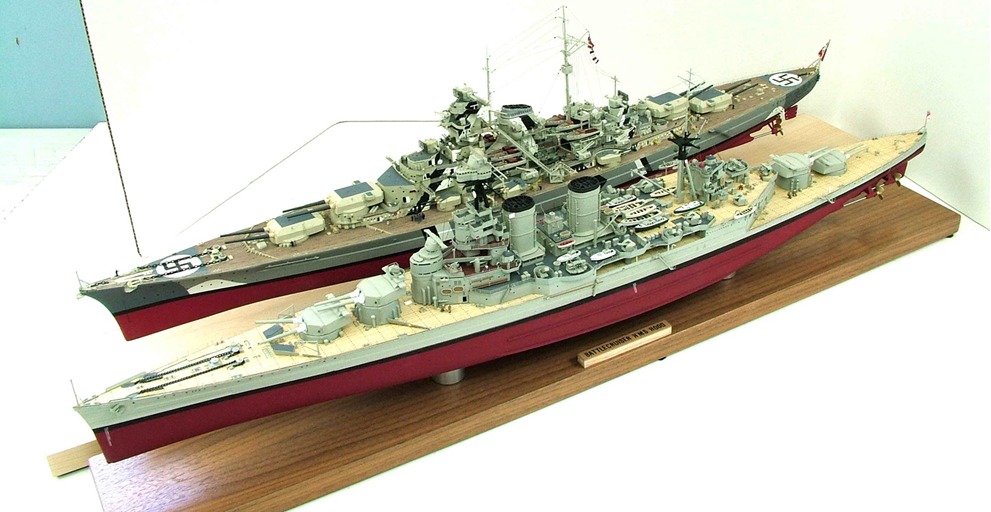 See ya at P&P in Grand Rapids…or you can attend the Make & Take…or you can just go to the Work Session!  Have fun! 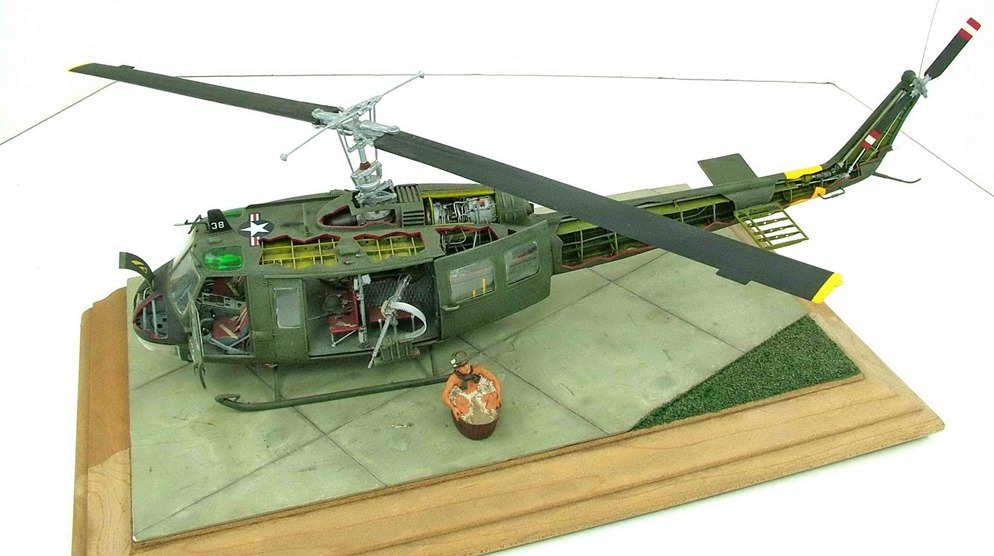 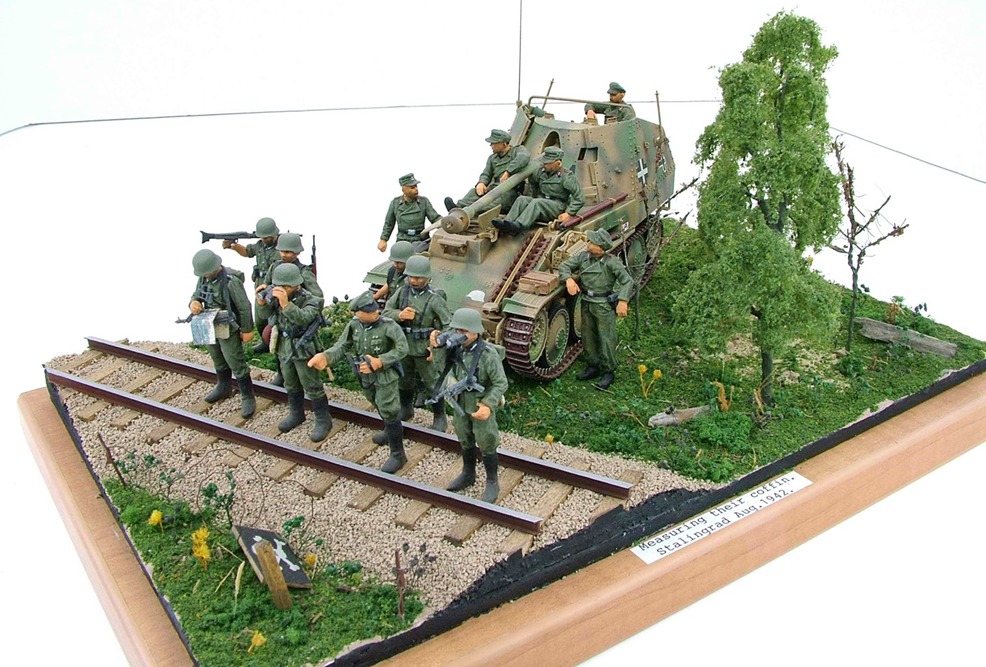 Oh, boy.  He’s back.  He buried us in his awesomeness.  Yep, Danny Jayne showed why he is a Master Modeler and I’m….not.  First is his 1/35 Tamiya Marder II late war.  It was supposed to be in Russia…but even the god of modeling messes up once every decade or so…as the paint job is wrong.  So now, it is somewhere in France toward the end of the war!  ;-)  Next is his Revell 1/32 Huey slick.  He tossed the interior and scratchbuilt a new one.  And it is a cutaway!!  In the third photo, the HMS Hood and the Bismarck and reunited again.  The Bismarck appeared in FMS and Dan just completed the Hood.  Note the laser cut wood decking.  He used a ton of White Ensign white metal and photo etch.  The blast bags were made from tissue paper.  This guy makes me look bad…like a skill level 1.55….. 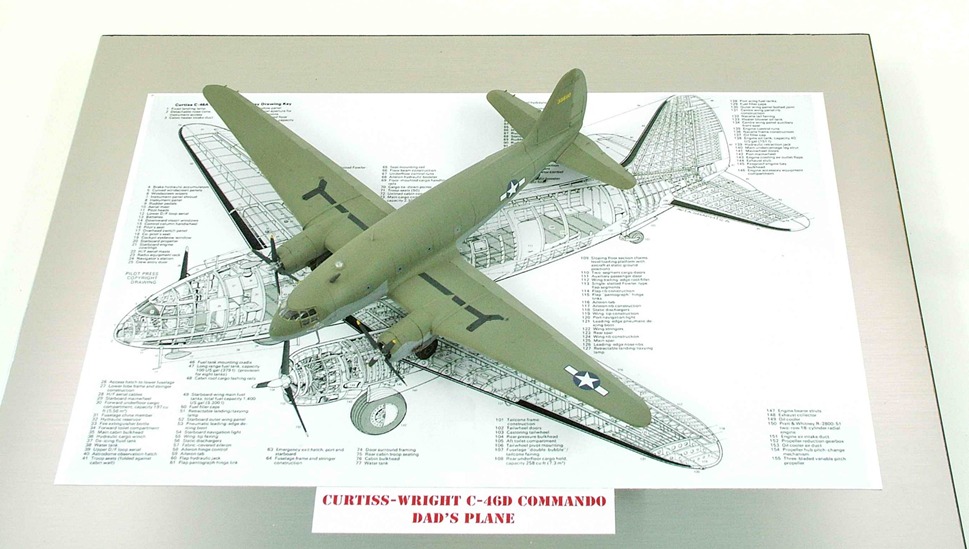 The VP wanted to honor his father, a USAAF South Pacific WWII C-46 pilot.  This 1/144 Platz kit was a fun build and he used B-25 aftermarket decals to back date the model.  The base was a gift from Master Modeler Jayne. 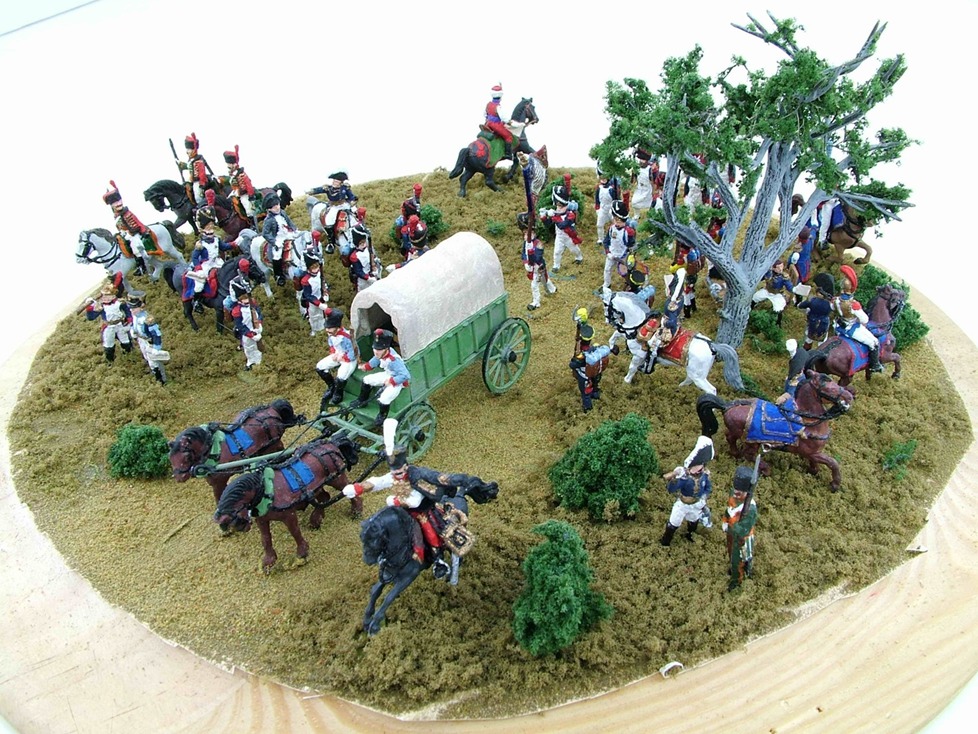 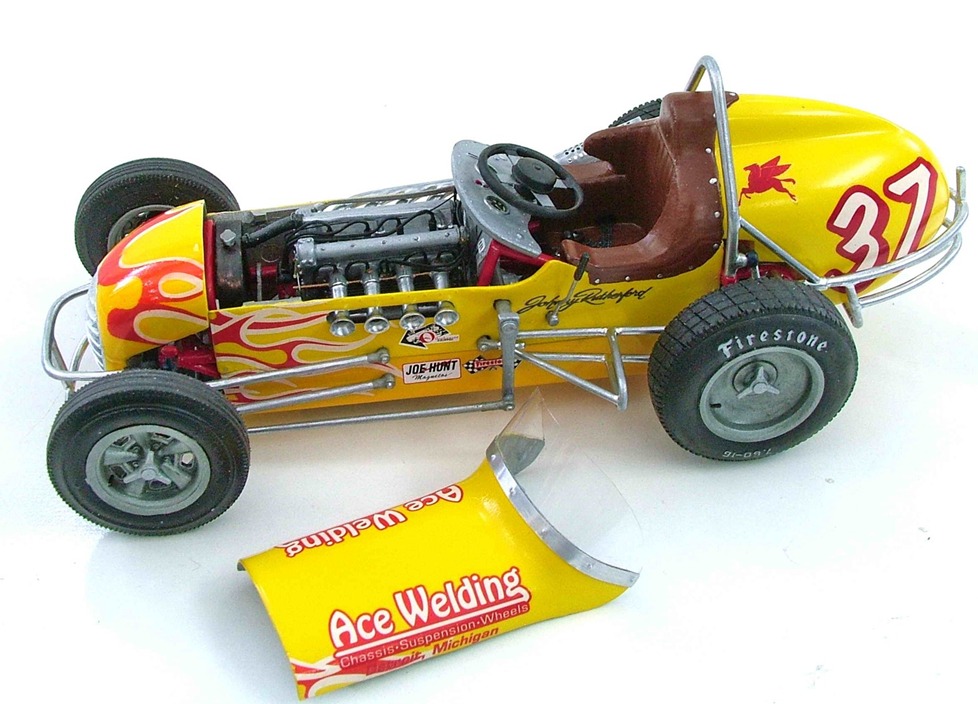 .We think Mark Seng was at the meeting.  We have his latest 1/72 diorama but he was in and out so fast he was a blur!  Here we have the Napoleonic Army with none other than Mr. Napoleon himself!  The guys all thought it was great.  And it was nice to almost see you again, Mark!

Our Pres does it again.  Here is his latest kitbashed work of art.  It is a 1960’s era sprint car with a beautiful Replicas and Miniatures of Maryland Offy engine that is fully plumbed and wired.  It is painted with Krylon safety yellow.  He scratchbuilt the grille, seatbelts, hand brake, throttle linkage, part of steering wheel, widened and cut grooves in the rear tires, and the exhaust pipe.  Wow!  Impressive work, JR! 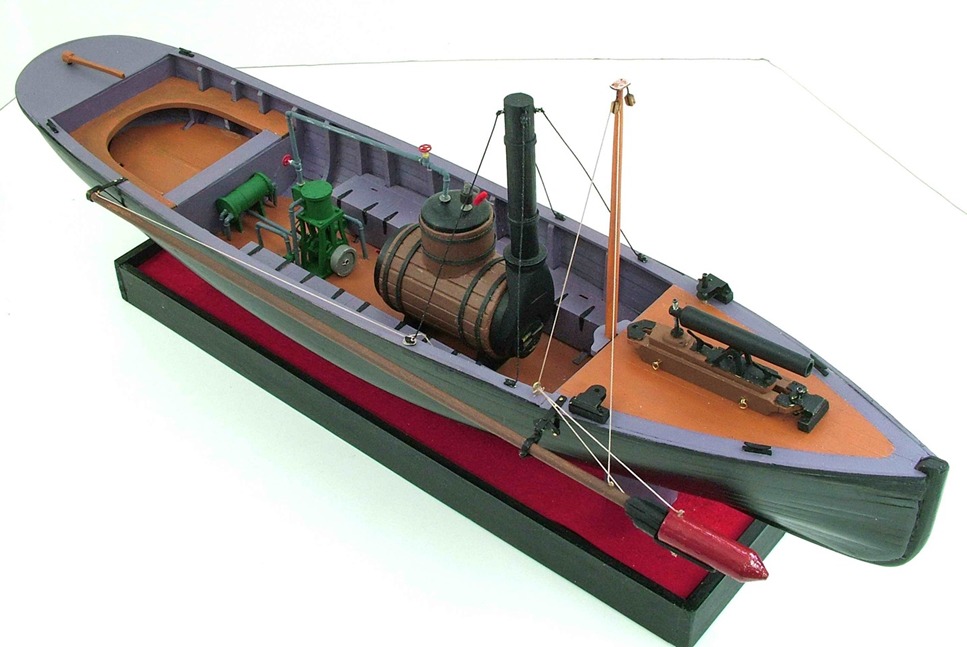 Francisco Alvarez has completed his latest wooden boat.  He has added the “torpedo” which isn’t anything like the torpedoes that submarines use.  It certainly isn’t a shoot and forget weapon…more like use it and blow yourself up!  It did sink a Union ironclad ship but it ended up being more of a suicide mission.  Thanks, Francisco! 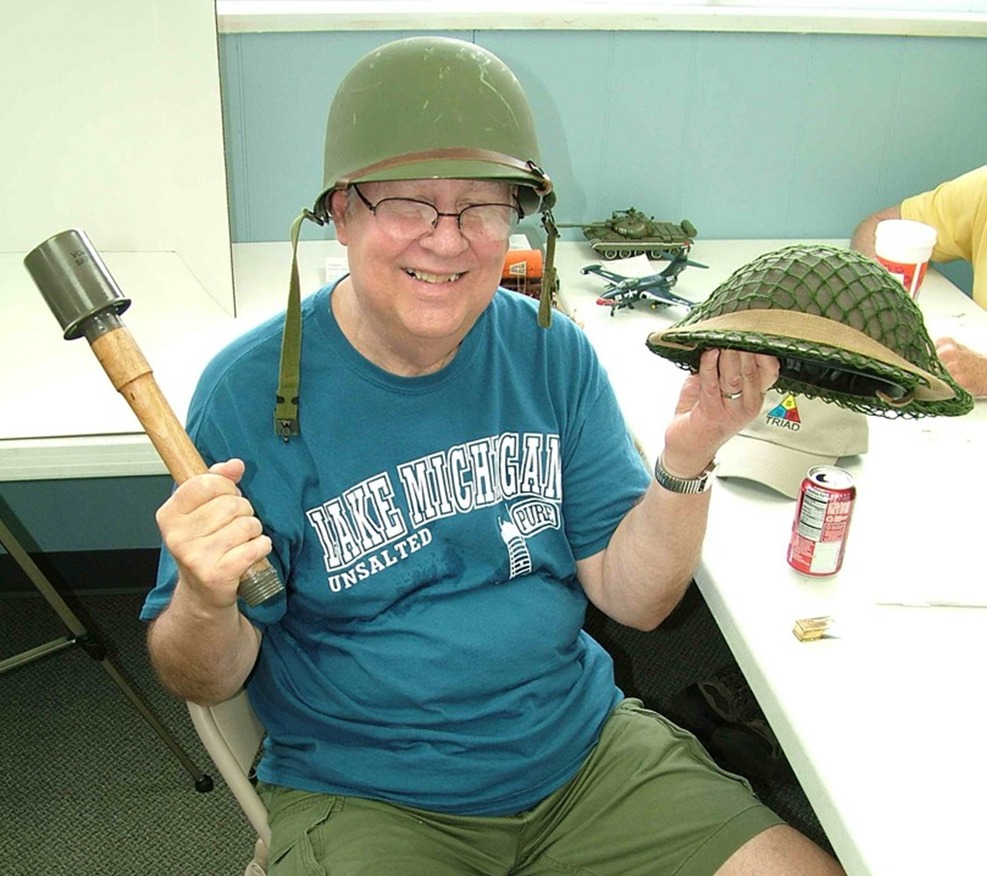 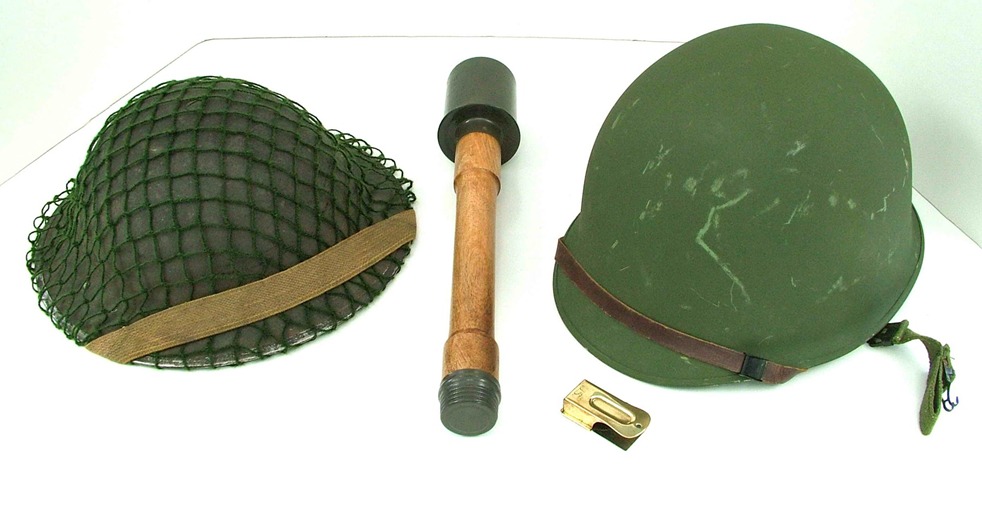 Bob Thompson skipped the models and brought in the real deal to honor the 70th Anniversary of D-Day.  Here we have a U.S. helmet similar to the ones worn on that day.  The helmet with the netting is a genuine British helmet.  In the middle we have a replica German WWII “potato masher” hand grenade and the brass object is the infamous cricket clicker used by our airborne troops.  Thanks, Bob!  Oh, Bob did get a good zinger in.  He said that when he's with Al George, it's "The Longest Day"! 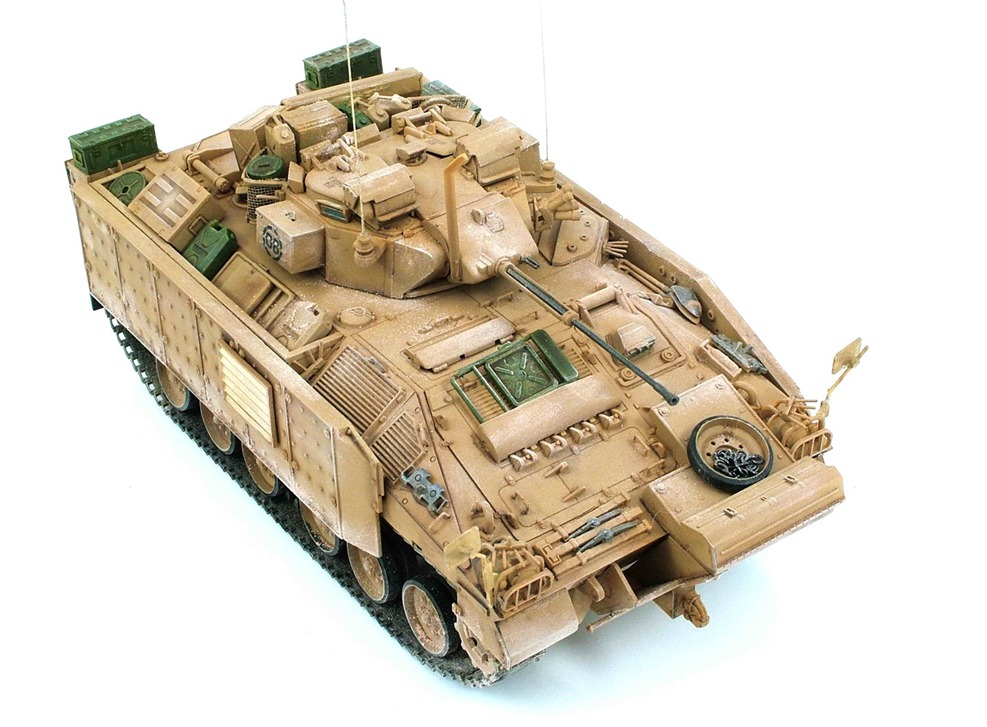 Big Daddy Bridenstein brought in a model that he built from an Academy kit he won at last year’s P&P.  This is a British Warrior MCV which is similar to our Bradley.  This is how these vehicles looked in Iraq in 2003…although Jerry’s vehicle looks better! 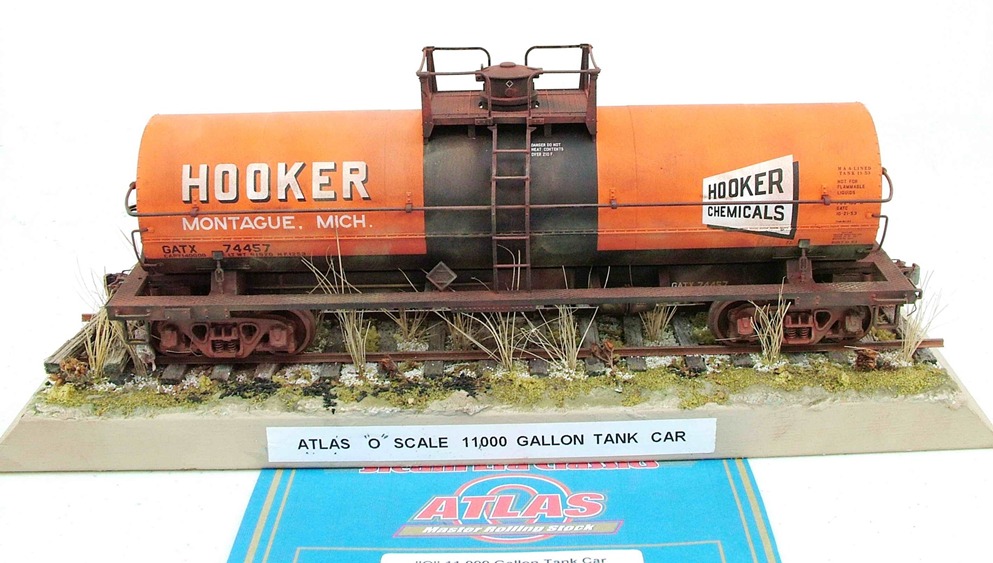 Al George took out all the stops with his O scale Hooker Chemical RR tank car.  He admits that none of their tank cars looked this "bad" but that was his artistic choice…and a good one it was!  He added new trucks, brake hoses, angle cocks, and lots more.  The weathering is superb.  Way to go, Al! 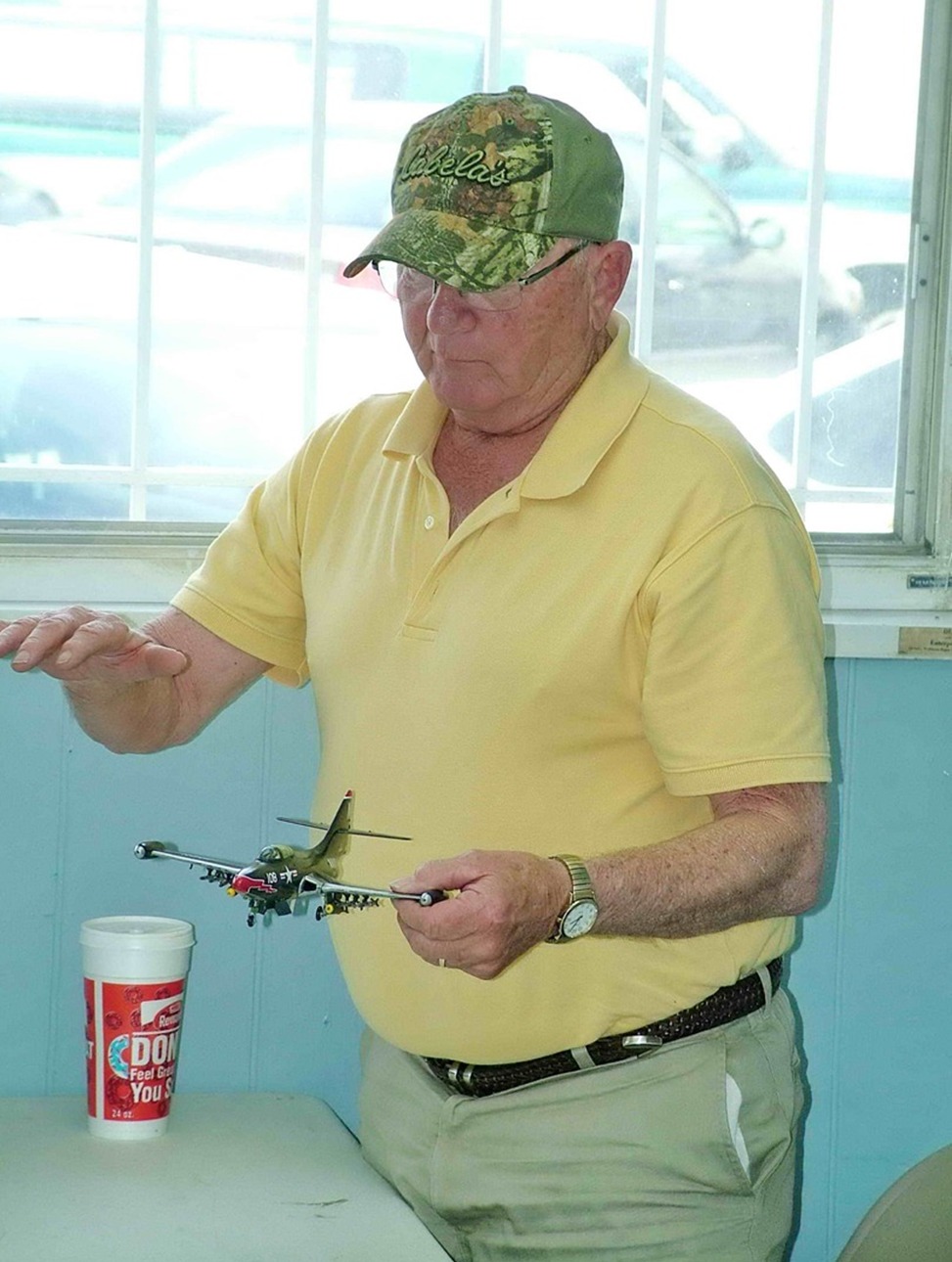 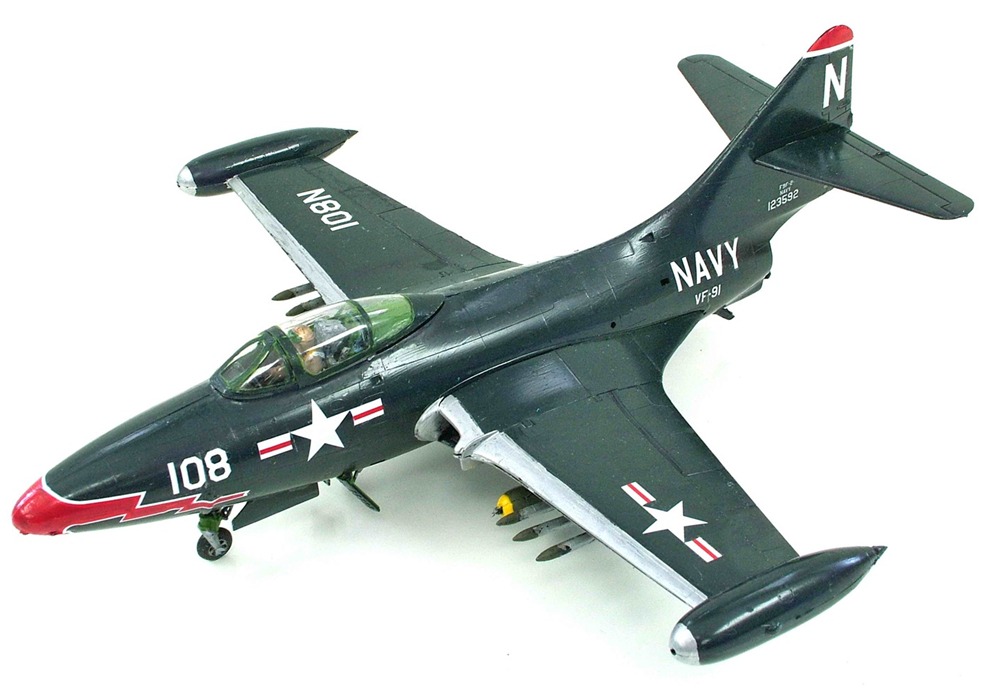 Feller Dewitt’s models never fail to impress and he never fails to make us laugh.  Here is his 1/48 F-9-F Panther jet.  He built it out of the box and hand painted it with Testors paint and he used Super Scale decals.  Sure, Feller had a few issues during the build like the rockets may not be straight and the model was a tail dragger.  Feller said it took more time to make a clear plastic rod to fix that problem than it did to build the rest of the model.  But the finished product looks great!  Thanks, Feller! 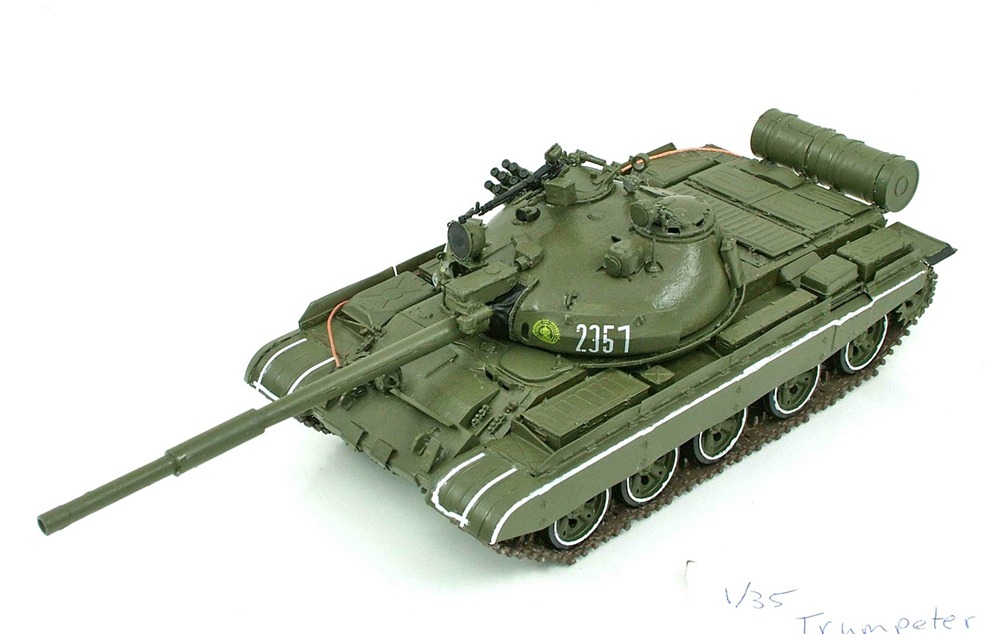 We have a lot of ground to cover so let’s get started.  Dave Martin was MIA but his 1/35 Tamiya T-62 BDD Soviet tank circa 1984 Afghanistan was on display.  This vehicle was up-armored to give additional protection against RPG’s.  Great job, Dave!  See ya soon!